Tucked away off a side street in the Hyde Park Square area of Jamaica Plain, Arcola Park was a rough-cut gem until July 22nd when the Ecological Landscape Alliance (ELA), Boston Natural Areas Network (BNAN), and the Landscape Institute at Boston Architectural College (BAC) met to polish the park into a fine jewel. 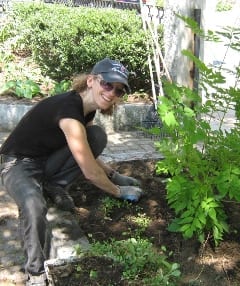 Hours of work preceded the work day. ELA Executive Director Penny Lewis dug and potted over 150 field-grown perennials donated by Lynda Morrow, owner of The Gardens at Rosewood Fields in Litchfield, NH. The Boston Greenway offered divisions of several of their plantings to augment the large donation.

Though the park’s large paved center, granite curbs, and wrought iron fence were intact, the plant material, dating from when the park was first created out of a vacant lot in the late 1990s, had declined until only a few hardy specimens remained. Soil had been depleted after 15 years of minimal maintenance, making it difficult for plantings to survive. 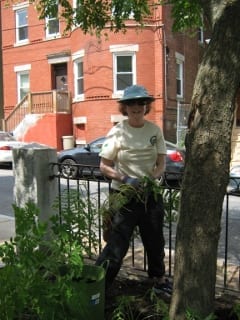 On July 22nd, Penny, Jeremy Dick, BNAN Superintendent, and Heather Heimark, Director Landscape Institute, led a team of volunteers from the ELA Board of Directors and membership, and current and former students of the Landscape Institute. Early volunteers removed some invasive plants that infringed on the park, then dug out selected woody plants and pruned others to establish a base for the new landscape. They amended degraded soil with rock powders and compost before planting new perennials and shrubs. By early afternoon, volunteers were mulching the revitalized beds with leaf mold that will continue to improve the structure and water-holding capacity of the soil over the following months. 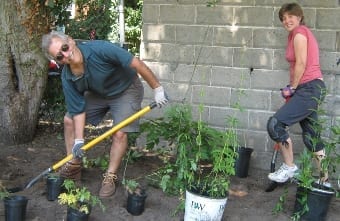 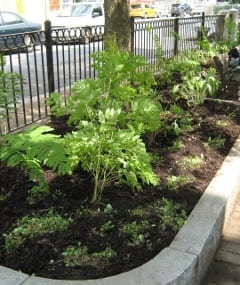 The second community service collaboration between ELA, BNAN, and the Landscape Institute wrapped up as the sun dropped over the surrounding buildings. Interested neighbors had dropped by throughout the day to offer words of encouragement and appreciation. As the work day ended, a young mom pushing a stroller passed through the park and thanked volunteers for their work. It’s clear the park’s renovations were welcome and will be enjoyed by residents of all ages.