Natural resources play a huge and often unrecognized role in our communities. Many people living or working in cities believe that natural resources lie outside of the city, and that they have to go into rural areas to experience the natural world.

The work of urban and community forestry educators help people to understand the importance of the natural resources in their own backyards, along their downtown streets, in neighborhood parks and cemeteries, and in small patches of forestland. These street trees, landscapes, community gardens, and “pocket parks” can change people’s lives. 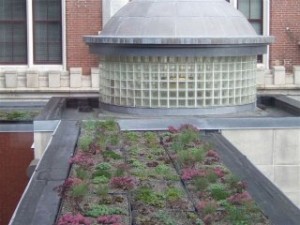 Natural resources improve quality of life, even in urban environments. Research confirms our experience that natural resources such as trees, shrubs, and flowers in our communities can:

Manchester’s first green roof, installed in September 2007, contributes to this improved quality of life by also: 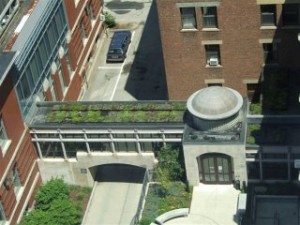 The Green Roof project continues a long tradition of partnering with the City of Manchester, its residents, and its business community. UNH Cooperative Extension, working with community organizations and Weston Solutions Inc., formed a green roof committee.

“We had several interested partners from the beginning, but it took a few unsuccessful attempts at finding a site to locate it as many of the buildings in Manchester’s Millyard and Downtown are older and did not have ‘as-built plans’ available for viewing, which were needed for structural analysis. Without building plans, a structural engineer would need to be hired to see if the roof could support the extra weight, even though the modular system would only weigh 18 lbs. per square foot soaking wet,” says Mary Tebo Davis, UNH Cooperative Extension Educator.

Once the site was chosen at Manchester City Hall’s “connector building,” which had as-built plans since it was built in the 90’s, the project moved quickly, taking only 3 months from the approval process to installation. 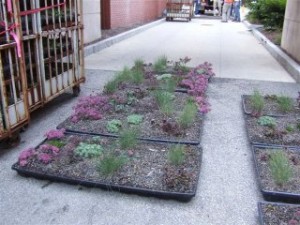 Weston Solution’s GreenGrid System was used because of its practical technology, ease of installation, and very little maintenance needs. The City Hall GreenGrid roof used four-inch deep containers manufactured from recycled plastic, filled with lightweight growing mix and pre-planted with perennial sedums and chives that can withstand the extremes of temperature and precipitation of roof top conditions. The GreenGrid System didn’t require any roof construction or redesign. The workers simply placed a slip sheet on top of the original roof and then lifted the pre-planted containers into place.

Conventional green roofs that are built in place weigh more and can make it difficult to address any underlying roof issues. With a modular system, if there is a problem with the roof underneath, the modules can be picked up and moved out of the way or even stacked one on top of another, until the problem is addressed, and then put back in place.

A modular green roof provides the same benefits as others, such as absorbing up to 95 percent of an average rainfall and allowing roof runoff to occur several hours after peak flows, which gives the sewer system time to handle other runoff. 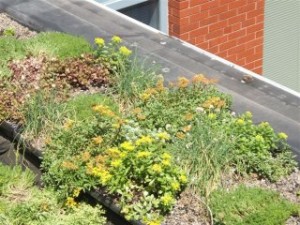 Although the green roof installation was a simple process, it took a community grassroots effort to get this project literally off the ground! A large coalition of public, private, and nonprofit agencies and volunteers came together to fully fund the green roof, resulting in no tax dollars spent. Although it took 5 years to find a site, the community raised the $12,000 needed in just one month’s time.

Now, almost three years later, the green roof is thriving and has spurred several other green roof projects in the area.