By i.am.georgia.harris on June 14, 2022 in Installing and Maintaining Landscapes

On Earth Day, I was scrolling through my email and came across a Washington Post article on 10 Ways We Can Reduce Our Carbon Footprint. Some of the things listed in the article I already do (#1 Create Less Food Waste, #5 Protect Our Forests), and some are good suggestions (#4 Shop Less, #6 Trade-In For An All-Electric Car). But right there at #2 is something I have recently been advocating for: Ditch the Lawn.

Ok, I haven’t completely ditched the lawn, but we are mowing less, and I am encouraging the spread of everything from violets to goldenrod into our green space that we call “lawn.”

The Washington Post article reminded me that Americans have a love affair with lawns. They are pristine, weed-free, large expanses of perfect green. And yet, they are essentially biological deserts – partly because of what we do to them and partly because they are a giant monoculture. Here are some of the appalling facts related in the article:

Two years ago, when we were encouraged to stay home due to the pandemic, I decided to kill part of my lawn. I wrote the article Lawn Murder describing the process of using cardboard, wood chips and a mix of purchased loam and compost to smother my lawn. It was the easiest garden I have ever started. I sowed a bunch of seeds but primarily focused on sowing a native annual called partridge pea (Chamaecrista fasciculata). I threw out some other seeds I had on hand and planted some small plugs of various meadow plants right through the cardboard.

Once the plants began to grow and the partridge pea began to flower, I did almost no weeding! I removed weeds like pigweed and burdock, but I tried to leave the garden to grow on its own. I did pull some of the partridge peas to give the plugs more light. I was amazed at what I had in mid-summer as the partridge pea – my annual cover crop – matured. The whole patch buzzed with the sounds of all kinds of bees! Some (Agastache, Monarda citriodora) seeds grew and bloomed in summer. Some transplants (Echinacea purpurea) also bloomed, but for year one, the partridge pea was the star of the garden. 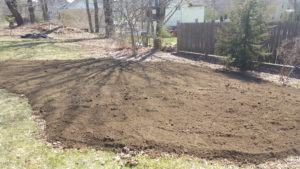 I was so happy with the garden that in the fall, I expanded it towards the back of the property – around the saucer magnolia (Magnolia x soulangeana) connecting to the shade garden along the property line. In the shaded area, I used primarily golden star (Chrysogonum virginianum), ginger (Asarum canadense), Christmas fern (Polystichum acrostichoides), and a few black cohoshes (Actaea racemosa) that I transplanted from another garden. As the growing season ended, I didn’t cut anything back. I let the partridge pea drop its seed back into the bed and go to sleep.

Last spring (2021), I removed the old stalks of the partridge pea (Chamaecrista fasiculata) as they were pretty tough. Some partridge pea grew from seeds and were scattered through the garden, but it was primarily concentrated in the front edge of the garden where I had planted strawberries (Fragaria virginiana) in mid-summer. The plugs and transplants I put in the first year began to thrive – they had developed good roots, and the tops were ready to grow, ready to out-compete the annual and show their true colors. 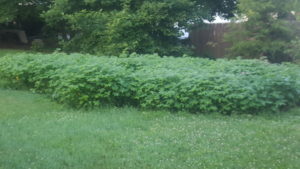 Surprises? You bet! All of my perennials grew and overtook most of the partridge pea, creating a beautiful meadow of a variety of flowers. The Beebalm (Monarda didyma) bloomed in mid-summer. Despite planting what I thought was the red bee balm, they turned out to be hybrids of M. didyma and M. fistulosa because I had grown them from seed collected in a mixed field. The flowers bloomed lavender, pinkish, and a rosy purple instead of the red I hoped for. The purple giant hyssop (Agastache scrophulariifolia) was abundant as I had both seeded it and planted plugs. I harvested quite a bit for tea and the plants still grew and flowered in late August. I planted a few plants of yellow giant hyssop (Agastache nepetoides), which were 10’ tall! But like the beebalm, several turned out to be hybrids between A. nepetoides and A. foeniculum and had a weird purply-yellow colored flower. This was not what I wanted or expected, so in this case, I pulled the hybrids out and left the three pure yellow-flowered plants. Still, the garden was amazing!

The broad leaf mountain mint (Pycnanthemum muticum) was huge and loaded with flowers attracting many bees and pollinating wasps!  It began encroaching on other plants as it spread quickly from 1” plugs to large 12” clumps! I had flowers on my swamp milkweed (Asclepias incarnata) and the self-heal (Prunella vulgaris) was forming a mat at the edge. Goldenrod came up and bloomed this second summer and added yellow to my mix of purples and white. The strawberries (Fragaria virginiana) were struggling under the tall partridge pea, so in late summer, I pulled the partridge pea from the garden so it would not go to seed, allowing the strawberries to spread and cover the soil.

The grasses have been slow. I knew this when I planted them. The little bluestem (Schizachyrium scoparium) was too short and not all visible. In fall, I could see they had grown and formed clumps in various places. The Indian grass (Sorghastrum nutans) was small and did not thrive; I am not sure it is still there. I added some new plants such as skullcap (Scutellaria incana), sedge (Carex sp.), and catnip (Nepeta cataria). The newer back section of the bed is loaded with violets. They make a nice ground cover, and I added more black cohosh (Actaea racemosa) for some height above the violets. 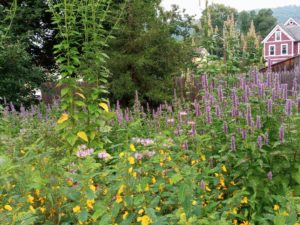 This second year I still did almost no weeding in the meadow. The density of the plants helped keep the weeds at bay. I did find mugwort (Artemesia vulgaris), an invasive species, coming up in the meadow. I pulled what I could and then dug it this spring to try to eradicate it before it takes hold. I had some weeds, such as pigweed and wild lettuce, which are easy to remove, and I still pulled some of the partridge pea. I had lots of color and lots of plants! This second year I had a lush garden of flowers. I was extremely pleased with the color and density of the meadow. I probably could let the garden grow on its own now.

Third Spring: From Nothing to Mature Meadow

This is the third spring from nothing to maturing meadow. I used a brush cutter and cut down the remaining upright stems in April. I left most of them on the ground but removed some stiffer things like the giant hyssop (Agastache sp.) and mountain mint (Pycnanthemum sp.) stalks. Although I was pleased with the beautiful flower plants of last year’s meadow, I am a gardener, so I am reassessing the mix. I need to make some additions and some changes. 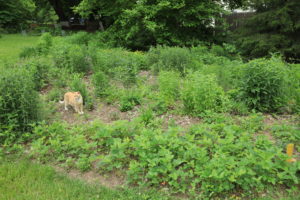 I am removing some of the broad leaf mountain mint (Pycnanthemum muticum) as it overtakes other plants. I will add some true beebalm – the red one while leaving some of the hybrid Monarda already there. I will add some yellows, too – black-eyed Susan (Rudbeckia hirta) and native sunflowers (Heliopsis helianthoides). I have added some skullcap (Scutellaria incana) and some showy tick trefoil (Desmodium canadense) to add deep purple and pinks to the mix. 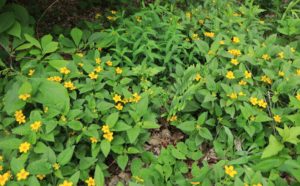 Meanwhile, I am thrilled with the garden. The shade plants, particularly the golden star (Chrysogonum virginianum), have taken off. I can’t wait to see the garden in mid-summer. I see seedlings of partridge pea (Chamaecrista fasciculata) coming up, and I know that they will help fill in any gaps.

This project has been just amazing! Now, I am looking for new places to kill my lawn and add some new species.

Leslie Duthie is a lifelong gardener. She was formerly employed at the Norcross Wildlife Sanctuary, where she was the horticulturist and plant propagator for over 38 years. An accomplished grower of ferns and wildflowers, Leslie’s love of ferns began when she first learned how to raise them from spores. Now retired, she volunteers at various gardens and works to protect land for her local Conservation Commission and land trust.