In nature, a symbiotic relationship exists between soil microbes and plants. All plants depend on microorganisms to provide all nutrients needed for their growth, access water, ward off harmful pathogens and pests, and break down toxins in the soil that could inhibit growth. The microbes in the soil benefit from the exudates released from the plant. This relationship creates a dynamic, interdependent living system. Without realizing the effects of our actions when we use chemical fertilizers, pesticides, and herbicides on plants and the soil we are actually destroying the intricate soil system that exists and that the rest of soil life depends upon.

From microscopic bacteria and fungi to earthworms, all play a role in a healthy soil system.

A healthy soil system contains microscopic bacteria and fungi, protozoa, nematodes, microathropods, earthworms, and other beneficial soil life. These microbes decompose organic matter, absorb water as well as help with drainage and create soil structure, the bodies of the microbes become a slow release fertilizer for plant life as well as create useful substances such as acids and enzymes that protect and nurture the plant and microscopic life in the soil. Any damage to one part of this delicate balance is felt throughout the entire ecosystem.

We can look at the soil ecosystem as having three levels. The first level consists of the microscopic bacteria and fungi that are attracted to the plant exudates and consume organic matter, nitrogen, and nutrients. These organisms hold the nutrients in their body, and when they die they become slow release fertilizer for the plants. They also are food for the second level of organisms that exist in the soil, such as nematodes and protozoa. These organisms are then fed upon by millipedes and earthworms and other organisms that keep this second level in check. The soil ecosystem is one of extensive biodiversity.

Nitrogen fixing bacteria tubercles form on the roots of lupine.

When chemical agents such as pesticides, herbicides, and fungicides are used in the environment they may kill off microbial life that is beneficial to the environment and the biodiversity of the entire soil ecosystem. The destruction of first level microorganisms affects the entire soil ecosystem all the way up to the largest mammalian predators. Chemicals which supposedly target only destructive insects or pathogens or bacteria also affect the beneficial organisms in the soil that ultimately are the makeup of the soil food web. Harsh chemicals and pesticide use should be limited due to the destructive impact on soil microbiology and life. When the soil is repeatedly treated with chemicals, the balance between good and bad soil microbes also becomes disrupted and soils can become toxic. 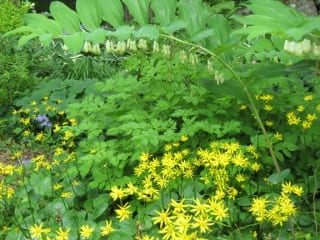 Avoiding use of pesticides and herbicides keeps the soil food web intact, resulting in healthier plants.

Give Good Microbes a Boost

One way to think about supporting healthy plant life is to enhance soil biology with regular doses of microbial inoculant. This will also create a balance between good and bad microbes in the soil. By adding the good microbes to the soil we are out competing bad microbes and restoring balance to the ecosystem.

When disease is present in soil, it is time to notice that the soil microbiology needs assistance. Many good microbial species can kill or attack harmful bacteria, fungi, or nematodes that attack the root system or leaves of plants causing disease. By thinking about competitive exclusion we are putting the good microbes back in control and letting them do their job. Good microbes improve the soil structure by producing polysacarhides or glues, hyphae strands, and tunnels for air and water to exist in the soil structure. Restoring soil biology is the way to restoring soil health and the health of our ecosystems and planet.

Linda Miyoshi is the East Coast representative for Teraganix, an affiliate of Effective Microorganisms Research Organization, Japan. Linda has spent the last three years educating farmers, gardeners, municipalities, and institutions on how to work with microbial inoculants in specific site conditions to provide water and soil remediation. She has a background in agronomy from State University of New York. You may reach Linda at linda.miyoshi@gmail.com.