This article appeared in ecoRI News and is reprinted here with permission.

A research team from the University of Rhode Island has found that beavers help prevent harmful levels of nitrogen from reaching vulnerable estuaries. By creating ponds that slow down the movement of rivers and streams, the animals aid in removing nitrogen from the water.

According to URI professor Arthur Gold, who led the study published recently in Journal of Environmental Quality, nitrogen levels have been increasing in Northeast waters for years. The use of nitrogen fertilizers has risen and urbanization has brought in influences from septic systems. This nitrogen is released into small streams and ponds and eventually travels to estuaries, where rivers meet the sea. High levels of nitrogen in these waters stimulate algae blooms, and as the algae die and decompose, oxygen is consumed from bottom waters, creating low oxygen levels that can lead to fish kills. 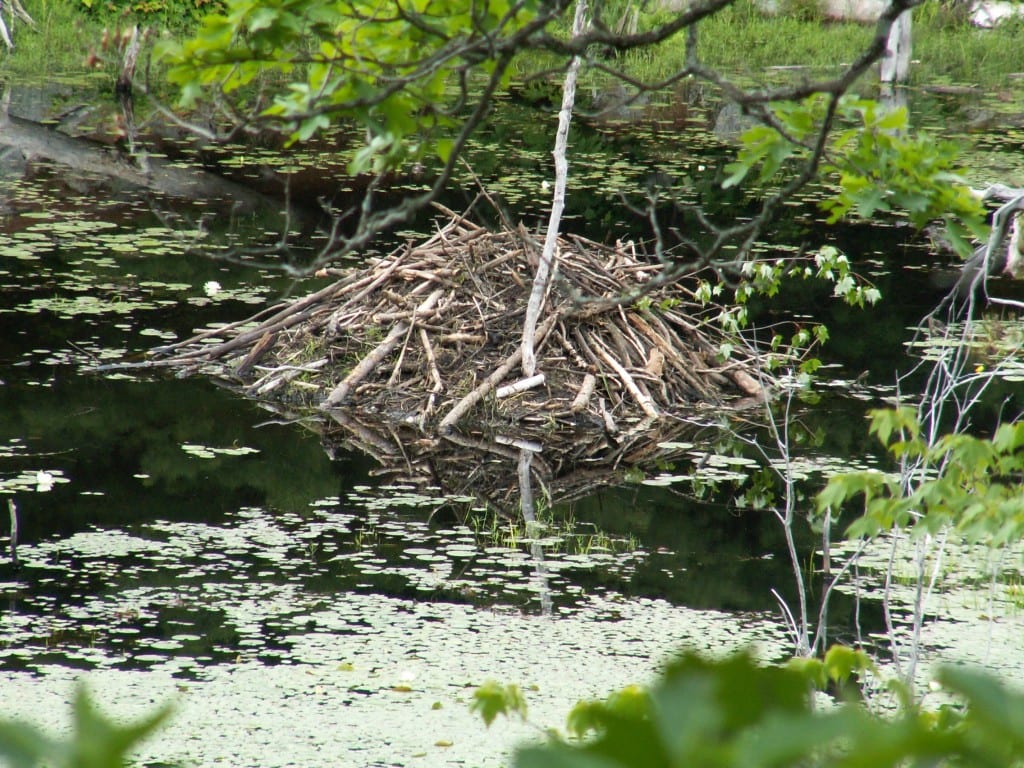 “What motivated us initially to study this process was that we were aware that beaver ponds were increasing across the Northeast,” Gold said. “We observed in our other studies on nitrogen movement that when a beaver pond was upstream, it would confound our results.”

The researchers realized the water retention time and the buildup of organic matter in beaver ponds led to the creation of ideal conditions for nitrogen removal. To determine how effectively beavers can do this, Gold — along with URI colleagues Julia Lazar, Kelly Addy and others — tested the transformative power of the soil by taking sample cores and adding nitrogen to them.

They then added to the samples a type of nitrogen called nitrate that was marked with a tracer that allowed them to be able to tell if the nitrogen was transformed and how.

Gold said bacteria in the organic matter and soil transformed the nitrate into nitrogen gas, removing it from the ecosystem through a process called denitrification. Thanks to the conditions brought about by the beaver ponds, this process can remove 5 percent to 45 percent of the nitrogen in the water, depending on the pond and amount of nitrogen present, according to Gold.

“What was impressive to us was that the rates were so high,” he said. “They were high enough and beavers are becoming common enough, so that when we started to scale up we realized that the ponds can make a notable difference in the amount of nitrate that flows from our streams to our estuaries.”

The research has some interesting implications. Lazar, who conducted the work as part of her doctoral dissertation, said it might change the way people think about beavers and their ponds.

“Most of these beavers are in areas with smaller streams, not big rivers,” Lazar said. “These smaller streams are usually the first to be developed, causing a decrease in beaver populations. So, it may be important to keep these areas from being developed so they can have effects on nitrogen levels downstream.”

Gold hopes to study the ponds over a longer period and to study abandoned ponds to see if the nitrogen retaining qualities remain after the beavers are gone.

“It’s noteworthy that the beavers have such an impact on improving nitrogen downstream,” Gold said. “We have a species whose population crashed from widespread trapping 150 years ago. With their return, they help solve one of the major problems of the 21st century. I don’t want to minimize that. We have to remember that those ponds wouldn’t be there without the beavers.”