By Maureen Sundberg on December 15, 2016 in Stormwater Management

It has been several years since the historic West Brook Conservation Initiative (WBCI) came online and started to treat stormwater flowing into Lake George in upstate New York. (Read a 2013 article about the project.) The man-made stormwater wetland treatment system was completed and planted in 2012, and the vegetation was given one year to grow and become well established before stormwater from the adjacent 90-acre urban watershed was allowed to flow into the area for treatment. In the four years since installation, the site has undergone quite a few changes and experienced some growing pains.

As a refresher, the stormwater treatment system at the WBCI covers about six acres. The system is designed so that stormwater first enters a forebay pond where sediments can settle out as the water slows. The stormwater then meanders through smaller ponds and vegetated swales where the flow is controlled by rock weirs. Many different types of aquatic vegetation planted along the treatment path absorb nutrients carried in the stormwater. Toward the end of the treatment, the stormwater is directed into two different types of wetlands and is again controlled by a rock weir. The main flow goes into a deep-water wetland. Then, as the water level rises during storm events, some of the flow splits off into a gravel wetland. The deep-water wetland and gravel wetland are the final treatment steps in the process. In an effort to keep the water flowing into West Brook at cooler temperatures after treatment in the wetlands, the water is removed from the bottom, rather than the surface, of the deep-water wetland and the gravel wetland.

During construction in 2012, we discovered that some of the adjacent properties generated quite a bit of additional stormwater to the site. The additional flow created severe erosion issues and required new sections of large river stone rip rap to stabilize the eroded areas. Additional steps were also taken to treat the stormwater before it entered the site. Some of that flow is diverted away from the site, but a majority of the runoff still flows onsite and is treated in the wetlands. 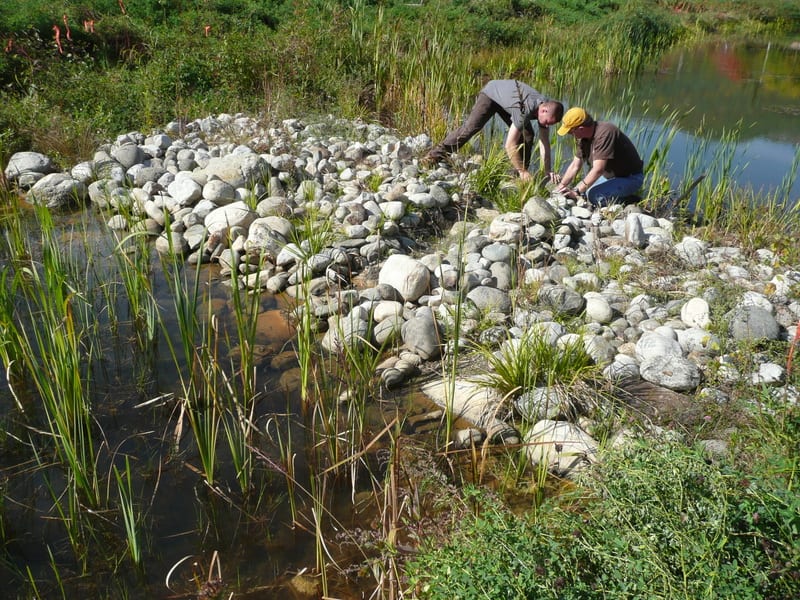 In an attempt to provide a temporary fix, the Lake George Association (LGA) worked with Warren County Soil and Water Conservation Department to lower the weir by creating a small channel in the weir, allowing water to flow through to the deep water wetland. To eliminate the pool of water in the gravel wetland, the inlet to the gravel wetland was temporarily sealed off when the system was opened to stormwater. Over the course of the next several weeks, the gravel wetland was monitored to measure the effect of lowering the weir. The water in the gravel wetland slowly receded to below the surface as designed. With the onset of winter in 2013, it was decided to wait until 2014 to reestablish the weir level height. 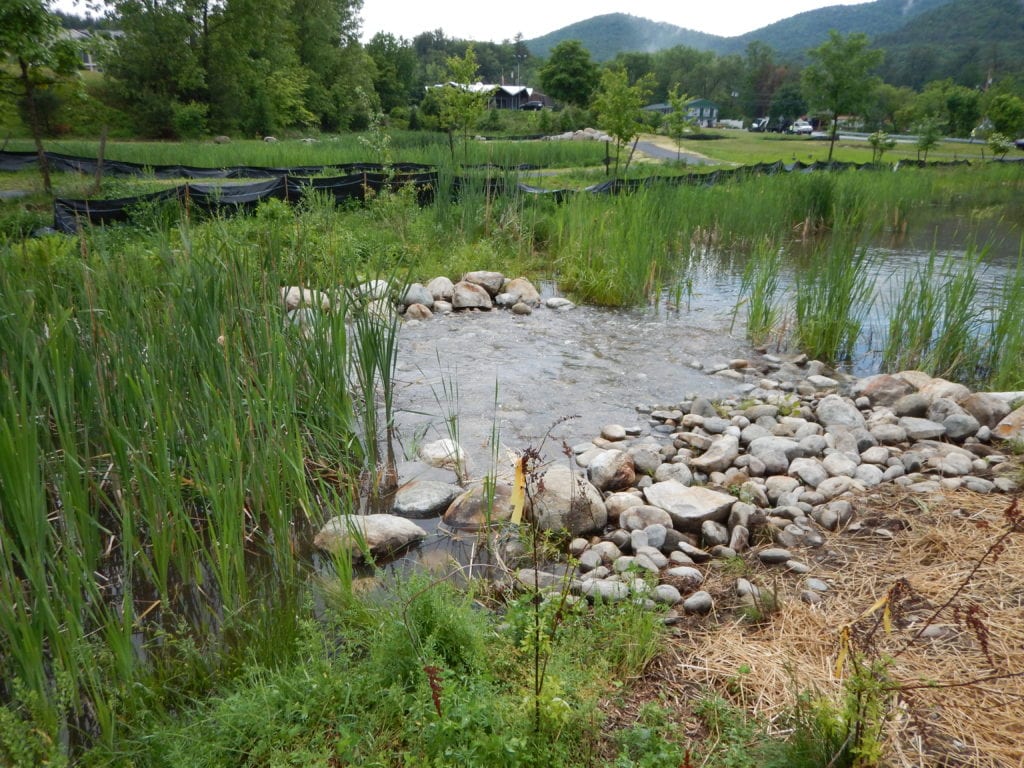 The correct height of the stone weir was re-established in 2014, allowing low flow into the deep water wetland and storm flow to rise and split off into the gravel wetland (not shown).

In late February of 2014, the frozen forebay pond suddenly collapsed! Water from the pond had found an old 24-inch culvert that wasn’t removed during construction. It was just pinched closed and buried.  When the water found the culvert, it started to flush out water and sediment, eroding the pond’s bank. After the collapse was discovered, stormwater to the site was blocked to avoid any further erosion, and sand bags and plastic were used as a temporary dam. 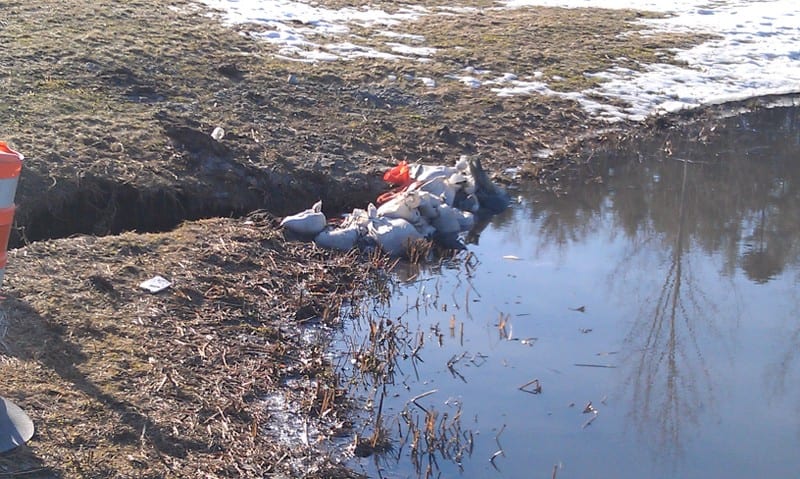 The bank along the forebay pond collapsed in February 2014 after the water drained into a buried culvert.

In June, about 75 feet of culvert was removed and replaced with fill. The bank along the pond was filled with clay and hydroseeded to seal off the pond. The site was once again opened to stormwater, but we missed treating the spring runoff. The small channel in the weir was left as is for 2014, but the cap keeping water out of the gravel wetland was removed. 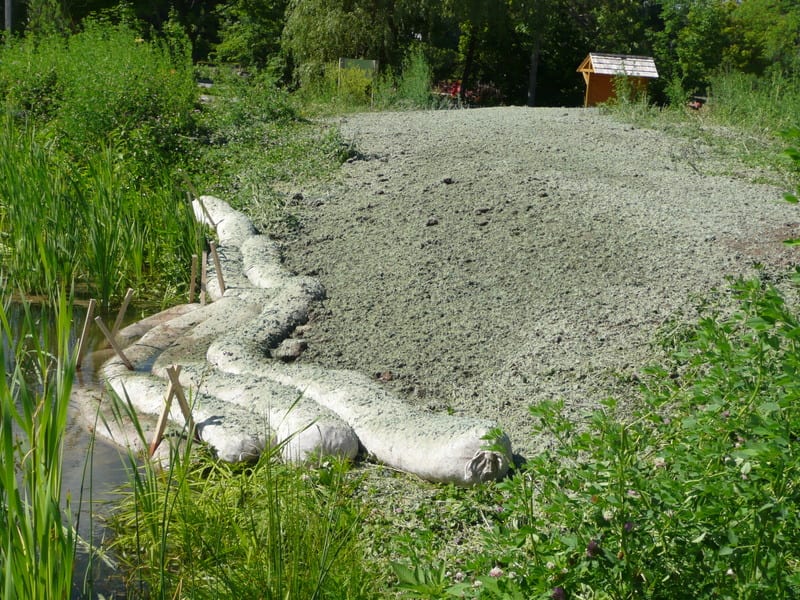 In June 2014, the buried culvert in the forebay pond was removed and replaced with clay, and the area was backfilled and hydroseeded.

In 2015 a new issue presented itself. During high intensity rain events, the forebay pond overtopped several times and untreated stormwater ran over West Brook Road and into the brook. The elevation of the pond bank was surveyed and compared to the original design height. The bank was too low, either having been compacted or not set to the correct elevation. In addition, the cattails in the pond had become so dense that the outlet leading into the second treatment pond now acted like a screen and slowed down any flow into the pond. Consequently, stormwater entered the system at a much higher rate than it exited. The unexpected change in flow rate coupled with a lower bank on the pond caused the water to overtop the pond easily. 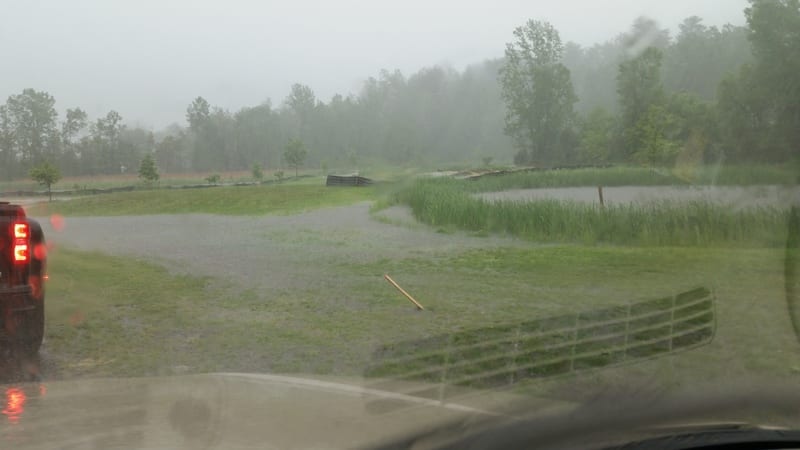 In 2015, the forebay pond overtopped the banks and flooded West Brook Road (foreground) during a severe rain event (~1” in 20 minutes).

Later in 2015, it was decided to finally adjust the weir to the deep-water and gravel wetland areas by removing the small channel created in 2013 and reestablishing the weir height across the entire weir. The weir height was adjusted so that normal flow of the groundwater on the site would flow into the deep-water wetland, then as soon as the volume of water increased during a rain event, the water would also flow into the gravel wetland – as projected in the original project design. Once the weir height was corrected, the bank height of the forebay pond was also increased by about two feet, using clay and topsoil. The outlet from the forebay into the second pond was cleared of cattails to allow the flow to pass unimpeded. Since that time the stormwater treatment system has functioned as designed with no overtopping or other issues. 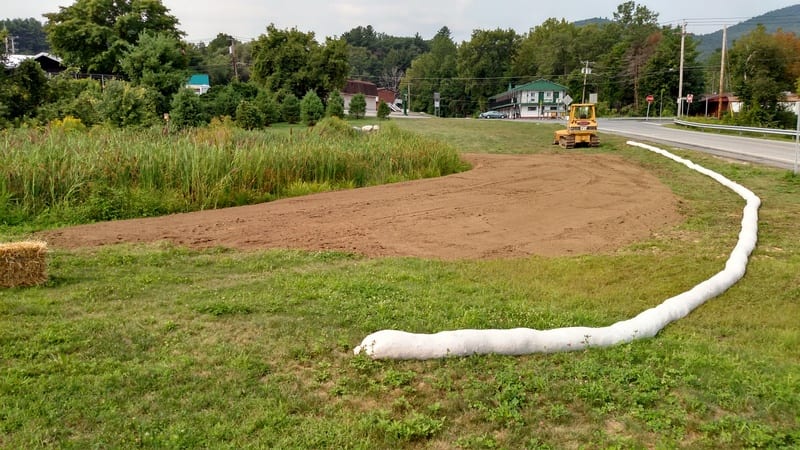 In 2016, the bank of the forebay pond was raised about two feet with clay and topsoil. The correction halted the flooding. 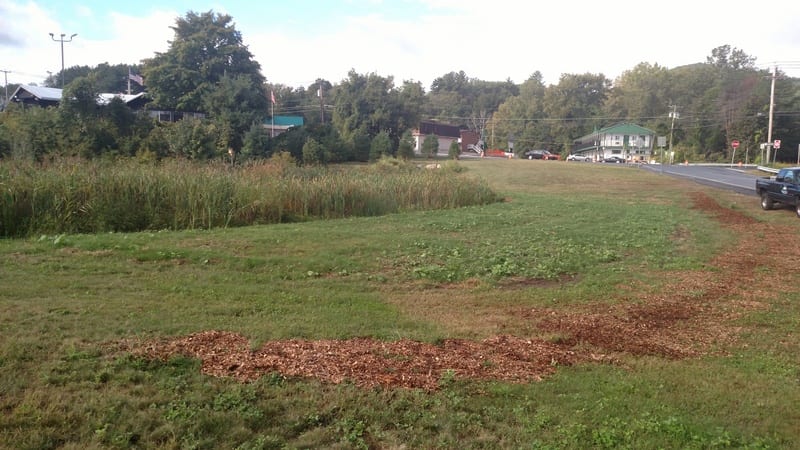 Forebay pond a few weeks after elevating the bank and hydroseeding.

In 2016, we completed our first scheduled maintenance on the forebay pond. We removed some of the accumulated sediment and vegetation in the pond – about 80 cubic yards of material in total. This procedure both re-established the base depth of the pond and removed old vegetation, which will allow new plants to emerge in the spring. Over the next several years, we will have to do the same for the smaller ponds and swales on the site. The gravel wetland vegetation will also need to be periodically removed so that the decaying plant matter won’t add Nitrogen back into the system.

Panoramic photo shows the forebay before it was dredged as part of regular maintenance. 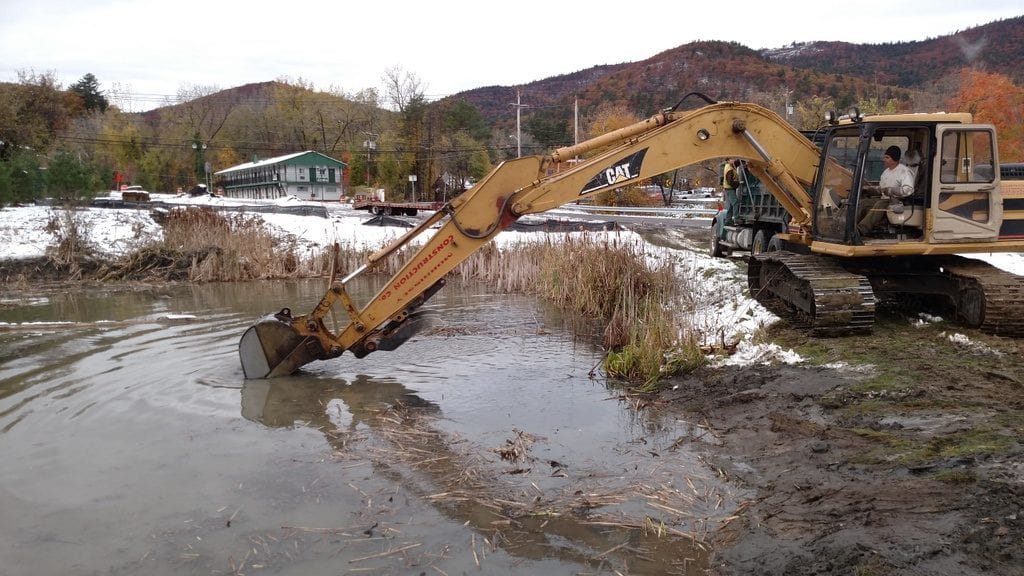 Panoramic photo of the forebay after it was cleaned out.

With early problems corrected and regular maintenance begun, we expect the West Brook Conservation Initiative to continue cleaning stormwater for many years – protecting Lake George water and preserving it as a drinking water source. The entire site will continue to serve as an educational tool where visitors can walk along the paths viewing the treatment ponds, swales, and wetlands while also observing the wildlife that now inhabit the area.

Randy Rath is Project Manager for the Lake George Association (LGA) and is part of the team that has and will continue to work on the West Brook Conservation Initiative. Founded in 1885, the LGA is an action oriented organization whose sole focus is protecting the Lake George watershed and preserving the Lake’s water quality. The LGA is a member-supported nonprofit organization that includes families, businesses, summer residents, anglers, boaters and donors who support Lake George. Find out more by visiting www.lakegeorgeassociation.org. Randy may be reached at rrath@lakegeorgeassociation.org.