General Description: Common or European buckthorn originates from Europe and Asia. This species, like many other exotic invasive plants, escaped from home and institutional gardens, specific wildlife enhancement programs, and private and commercial planting projects. Common buckthorn is widespread in most of New England westward to the north central states (Samuels, 1996; Dirr, 1998) and farther west to the Rocky Mountain States, and California (Zheng et al, 2006).

Common buckthorn is a single stem or, at times, a multi-stemmed shrub or small tree that can reach an average height of about twenty or more feet. Leaves are simple, sub opposite; they are elliptical to ovate in shape with a weakly toothed edge (Dirr, 1998; Samuels, 1996). Leaf color is glossy green above with a light green underside that can be noticeably glabrous (not hairy, but wrinkled) (Dirr, 1998). In the seedling stage the first or primordial leaves are opposite and rectangular in shape. Buds have scales which are brownish black in color and appressed (held close to the stem); some terminal buds are modified spines (Dirr, 1998; Magee and Ahles, 2007).

(1) High seed production and good seed viability. Viable seeds can last in the soil bank between two and six years depending on soil and site conditions. (Zouhar, 2012). 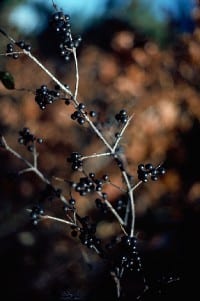 The dark berries of Common buckthorn are attractive to animals who spread the seed widely. Photo by Leslie Mehrhoff; courtesy of IPANE.

(2) Vectors. The seeds are inside the dark colored fruit and dispersed by birds and other animals sometimes over great distances.

(3) Sexual reproduction breeding system. Breeding system is mostly dioecious (male and female flowers are on separate plants (Symonds, 1963; Dirr, 1998; Zheng et al, 2006). Therefore, it takes a male and a female plant in close proximity to start a viable population (i.e. just as it does for Asiatic bittersweet vine). This may be the reason why common buckthorn seems to grow in groupings. I have observed this species in dense populations in one area of a woodland and sparse in another area when the growing conditions in both areas were compatible. In general, if given enough time, both populations would meet up or coalesce creating a dense shrub understory.

(5) Predator avoidance and/or deterrence. There are virtually no appreciable predators or diseases feeding on this plant to curtail its growth, development, and spread. 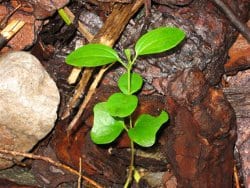 The first (lowest) leaves of a common buckthorn seedling are rectangular – a diagnostic feature for this invasive species.

(6) The timing of leaf out and of leaf loss. Leaves emerge a little earlier in the spring than some native plants, but like glossy buckthorn, this species holds onto its leaves a little longer in the fall than most native plants (Samuels, 1996). This trait allows common buckthorn to produce more carbohydrate and other compounds in the leaves by way of photosynthesis and transport these products to the roots for storage (i.e. cold weather storage for better winter survival and spring growth).

(7) Sun/shade tolerance. Common buckthorn is shade-tolerant. However, like glossy buckthorn, it frequently invades sunny areas which is why it is seen growing in open fields, along field, road and path edges, and any other areas that are sunny.

(8) Time of year of fruiting. Common buckthorn flowers from May through June and produces round black fruit about ¼ inches in diameter from July through September (Zheng et al, 2006; Magee and Ahles, 2007; Dirr, 1977). Like glossy buckthorn, this species has longer flowering and fruiting periods than most native plants in the landscape increasing its invasion success.

1. Cultural Controls: Monitor or visually inspect your property for common buckthorn. Do this at least every June and September. As stated in Part II, IPM Control Strategies for Exotic Invasive Plants, prevention is a cultural control of great value. Do not plant or encourage the planting of this species. Educating others (e.g. clients or neighbors) about the dangers of this pest is another cultural control of enormous value. 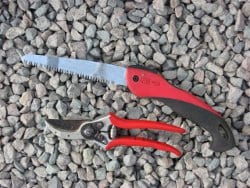 Shears and a hand saw are commonly used for cutting woody invasive plants.

2. Mechanical Controls: Pull, dig, and cut. Pull out easy-to-pull plants. If you can’t hand-pull common buckthorn, then you can dig out the plant or pull it out with a Weed Wrench ®. Spring or early summer cutting of common buckthorn will slow its growth and reduce its ability to form functional male or female flowers for reproduction. Remember, this species is a dioecious plant with male flowers on one plant and female flowers on another plant. Cutting down common buckthorn in close proximity to one another before they flower disrupts an otherwise intact breeding system. In addition, the practice of repeated cutting on a monthly basis will be more effective at stunting the plant and inhibiting flower and fruit production. Mechanical controls can be done at any time of the year; however, the best times are the months before or during flowering.

3. Biological Control: There are no insects, mites or commercially available disease organisms yet found to be effective biological control agents.

4. Chemical Controls: The best time for any control option is just before a plant flowers. In addition, the application of herbicides in July, August, and up to mid-September gives maximum chemical control. These are the months that carbohydrates and other plant compounds are being manufactured in the leaves by way of photosynthesis and transported from the leaves to the roots for storage. This downward flow of plant compounds helps facilitate the transport of foliar and stump applied herbicide to the roots for more effective kill. The mechanical control of cutting or mowing is also very effective during these months for the same reason. For example, when you cut the top off any plant the roots naturally respond by pushing up more top growth (sprouting), reducing the root reserves (carbohydrates and other growth compounds), and stressing the plant. Every time you cut the top off, you force the plant to sprout which reduces the root reserves and weakens the plant.

Suggested chemical control during July, August, and up to mid-September is to cut common buckthorn down to one inch from the ground and immediately apply straight glyphosate herbicide to the freshly cut stump using a paint brush or sponge applicator. Roundup ‘poison ivy killer’ works very well. Suggested chemical control in March, April, May, and June is to cut the stump high (six to twelve inches) and let it sprout. Then cut the sprouted plant in July, August, or early September to one inch from the ground and stump-applicate with straight glyphosate herbicide.

1. Properly identify common buckthorn. Educate your neighbors and others about what you are doing and why. 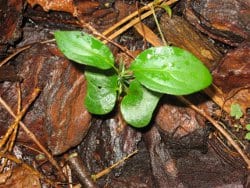 The seeds of common buckthorn are primarily spread by birds, thus these seedlings are frequently found in perennial gardens throughout the summer.

2. Hand pull what you physically are able before common buckthorn produces berries (seeds) – preferably before July.

3. Use a Weed Wrench on hard to pull plants; preferably before July.

4. Plants that prove to be too difficult to remove by way of pulling or digging you can cut down to a one-inch stump and immediately apply a glyphosate herbicide to the freshly cut stump using a paint brush or sponge applicator. Stump application is very effective during July, August, and up to mid-September.

If you cannot stump-applicate the hard to pull plants during the summer months, then you can instead cut the plant six to twelve inches from the ground before it starts to produce berries (seeds) in July. After the taller stump has re-sprouted, you cut it to one inch above the ground and immediately apply glyphosate herbicide to the freshly cut stump. Allowing the stump to re-sprout during the summer months draws carbohydrate and other growth compounds from the roots and depletes some of the root energy making herbicide kill more effective.

6. Cold weather stump application (November through February; mean temperatures between 15.8 and 46.4 Farenheit) (Reinartz, 1997) reduces the risk of contaminating non-target plants. University of Wisconsin researcher, James Reinartz (1997), tested cold weather stump application using 25% concentration of glyphosate herbicide on glossy buckthorn and obtained 92 to 100% control. I have used straight glyphosate concentration on the freshly cut stumps of glossy buckthorn and common buckthorn and obtained a 98 to 100% kill from November through January. Cold weather control frees up time for control efforts that is not available during the summer months and is especially useful on overgrown common buckthorn individuals or stands.

7. The above suggested example may be modified to suit existing site conditions and the level of common buckthorn infestation.