I always like this time of year. The deadlines seem to be spaced out a bit more than during the spring and fall months. The last of the site visits are wrapping up as the ability to write with mittens in the freezing cold and wet weather becomes more difficult. It’s time to sit at the drawing table and computer and work on the designs that will eventually be put in the earth, come the New England “thaw.”

It also gives me a moment to consider the aspects of my work that often become automatic, especially during those crazed moments of the year when we ‘crank out’ the plant lists for the projects that all seem to be due at the exact same time. It’s so easy to grab the same plants again and again, selecting the ones that have worked in the past and have proven to succeed. After 20 years of working as a Landscape Architect, I most certainly have my “go-to” favorites. These are the plants that will often be incorporated in most of my designs and will always make me happy when I go back a year after the design is installed and see them flowering at the exact time that I had planned or glowing in the autumn light with the warm oranges tones that I’d envisioned.

The trend to use native plants has grown over the last 20 years, and I’ve been delighted to see this development in the industry. In the early 1990s I designed a landscape plan for a new municipal light and power facility in the MetroWest area. Working with the Town’s Natural Resources Coordinator, we made the ‘cutting edge’ decision to incorporate a majority of native plantings in the design and include almost no lawn area. The selection of available native plants was limited in the nurseries and any specialized varieties of these natives were practically nonexistent. With the increased popularity of these plants in residential and commercial landscapes, our choices have expanded and our designs have become more interesting.

Each year I look for new plant favorites and evaluate the choices I’ve made during the prior seasons. I’ve included native plantings in almost every planting plan that I have designed because they bring a natural look to the landscape, they often provide wildlife benefit, and they tend to be hardier if chosen to match the environment of the proposed site. The improved varieties that have been developed enhance their benefit for my designs, with larger berries, color varieties and mature size options. As more designers use native plants and more nurseries offer them for both their wholesale and retail customers, clients have become excited to include them on their properties and the aesthetic taste of the general public seems to have shifted to accept a more natural look to the landscape. The increased awareness of the benefits of using native plants keeps us moving forward towards a better environment for our living and working spaces.

I do admit to having a few favorites that stretch the definition of native a bit, occurring primarily in areas to our south. These plants offer much to the designed landscape, pose no risk to the surrounding natural areas, and thus seem to be welcome additions to my palette.

Listed below are some of my current, preferred native…or nearly native…plants:

This plant has been a great addition to several of my commercial and residential projects. It has a nice upright habit, reaching a height of twenty feet with a spread of twelve feet. The flowering season is early in spring and creates a delicate, airy appearance. The autumn color blends from reds to yellows. 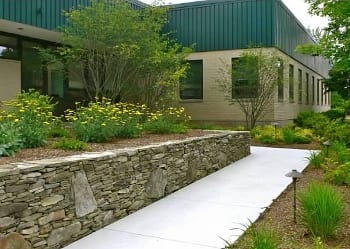 In this commercial project, the Serviceberry creates a soft vertical break from the architectural lines of the building above. 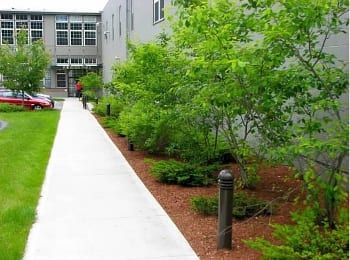 The Serviceberry and Winterberries, combined with the low Yews, create an appealing entrance to this facility, with multi-seasonal interest along the entry walkway. The plants soften the long, expansive blank wall of this refurbished office building, once used as a rope factory.

This evergreen groundcover, according to Michael Dirr, is native to numerous areas, but I think of it as more native to Cape Cod. 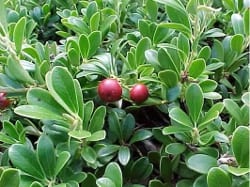 It thrives in poor, sandy and infertile soils. Although occasionally I’ve had some problems with its success, there isn’t one thing that I don’t like about the plant so I try to include it whenever I can. It is spreading, has a fine texture, flowers with a tiny pink flower in April and May, and then has a bright red fruit at the end of summer. 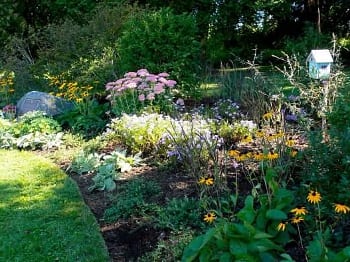 The Bearberry is mixed in the foreground with the perennials to highlight this Memorial Garden in September.

This large shrub is native in the Mid-Atlantic, but I’ve had success with it here. It’s rather ordinary and a good backdrop shrub getting to about six feet or more. When it flowers in May, the fragrant flowers are so unusual that it always attracts attention. 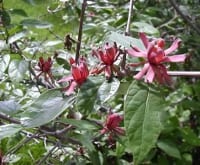 This native plant is not for everyone or for every place. It’s an extremely hardy, spreading plant that does well in sandy, sterile soils. It has a wonderful fragrance when the leaves are crushed. That said, it forms a soft textured colony of green and, in the right spot, creates an interesting element in the landscape. 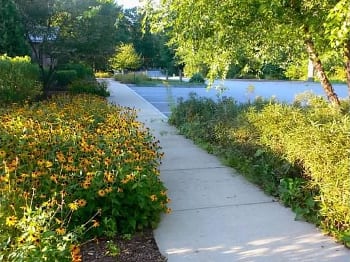 Combined with the Black-Eyed Susans and the River Birch, the Sweet Fern seems to glow in the afternoon sun in this parking lot. 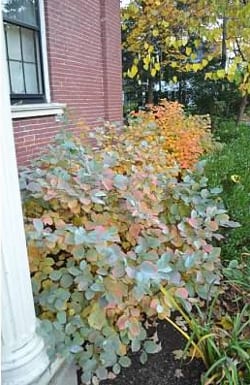 I’ve recently used the ‘Blue Shadow’ variety of the Fothergilla major, and in combination with Ilex glabra, Inkberry, the gray-blue tint is lovely against a brick building. The autumn color extends this plants success throughout the seasons. This is noted as ‘native’ in some guides, but its native habitat is more southern, not in New England. I’ve had good success with the plant, but it may tend to sucker (especially the gardenii). 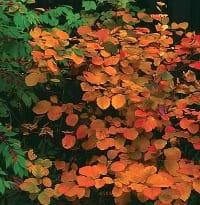 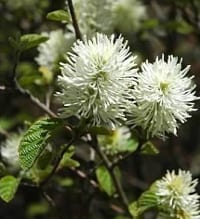 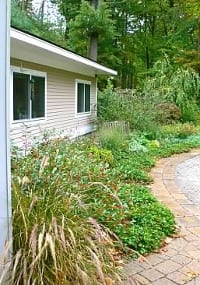 I can’t say enough about the Winterberries!! These wonderful native plants just seem to have found their way from the woodlands into our gardens and commercial landscapes. They’re a sturdy green backdrop for most of the spring and summer season, but then the bright red berries appear and just add sparkle to the planting bed when everything else is starting to fade.

Since the winterberry is deciduous, the red berries aren’t hidden by leaves and seem to have a bigger visual impact, at least until the birds find them!

This low, spreading, native groundcover will sucker. It’s best to start with that statement, since it’s not going to be the best choice if that’s a problem. If you need a spreading plant that will be very hardy, with lovely foliage especially in the autumn, then this is a wonderful choice. It’s great for covering slopes or in the islands of parking lots. 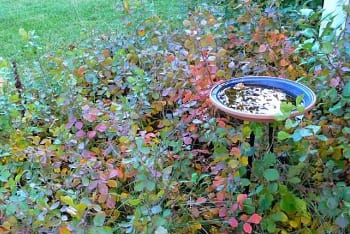 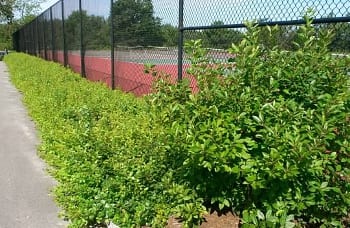 Lorayne Black, ASLA, Landscape Architect of Groton, MA, has been designing outdoor living spaces in New England for over 20 years. From intimate gardens for private residences to master plans for large, commercial project, Lorayne provides thoughtful designs that are responsive to the individual client and the unique site requirements. Each project is an opportunity to create an attractive, creative, functional and environmentally sound outdoor space. She may be reached at LBLack@groton.org.