By ecopro on December 14, 2012 in Landscape Design, Meadows, Rain Gardens

by Amanda Sloan and Dave Renzi

As they make the left turn into the Providence, RI doctor’s office parking lot, some patients might set their jaws and steel themselves. The screening procedure these Baby Boom Generation clients are about to undergo – while relatively comfortable, completely routine, and sometimes lifesaving – is one that makes many feel squeamish beforehand: the sign at the turn says “Gastroenterology Associates/West River Endoscopy.” 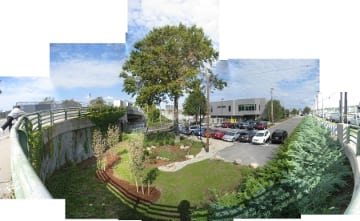 A soothing designed landscape near this medical building features a rain garden that provides storm water function as well as biodiversity and habitat.

The medical office building is handsome and modern, but it is located at Providence’s gritty urban edge, smack between a lonely freight rail line and the expansive US Mail processing compound. Anticipation of the medical procedure notwithstanding, however, once patients are inside the property, they can’t help but relax a bit. Groupings of native plants such as red maple, juniper, river birch, and hollies grace the parking areas. Clusters of flower- and berry-bearing shrubs encircle the main door. Daisies and tawny grasses dance in the sunlight through window views. Brown University professor Dr. Neil Greenspan, the practice director, and his partners are physicians with an ecological bent. With the help of landscape practitioners, they have created a small urban oasis and a textbook example of how commercial properties can benefit from ecological design and “green” landscaping ideas.

Three ecological landscaping principles in particular were embraced by Dr. Greenspan as he and his partners looked to enhance and restore the building’s urban surroundings. One was the important role any designed landscape can play in restoring habitat, especially in cities. A second was the importance of supporting biodiversity by including native species, reducing invasives, and using less intensive landscaping techniques. The third was solving infrastructure problems by utilizing low impact design. 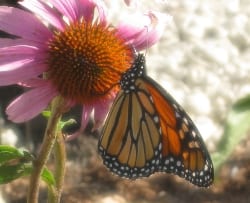 Monarch butterflies stopped to sip nectar in the rain garden and hopefully laid eggs on milkweed in the meadow.

To support these goals, the landscape at Gastroenterology Associates boasts several features of note. Instead of a lawn, the building is surrounded by a meadow. Planted near the outdoor employee lunch patio and carrying around to the front door is a bird habitat. And, at the bottom of the parking area where drains would normally catch storm water and divert it off to who-knows-where, a rain garden of native plants instead offers a functional and beautiful alternative. Working with Dr. Greenspan on these features over the past three years are Dave Renzi, president of Out in Front Horticulture, Exeter, RI, and Amanda Sloan, landscape architect with GLA/BETA Group, Lincoln, RI. Brian Muoio, owner of Briden Nurseries, Cranston, RI, was the contractor for the rain garden.

The meadow was an early dream of Dr. Greenspan and a part of the original landscape design created by GLA Landscape Architecture. Like many meadow installations, it took a while to come into its own. A frequent problem during the first few years after meadows are seeded in is that desirable meadow plants are perennials and take a while to mature, and while this is happening, invasive plants can take over. 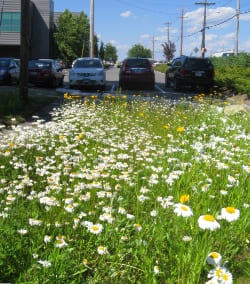 Dasies and coreopsis bloom in the meadow area.

“In 2011, I was contacted by Dr. Greenspan to consult about the meadow area,” says Renzi. “I saw that some less desirable annuals were taking over, and that invasives such as bittersweet and Japanese knotweed were becoming a problem.” In Spring 2012 Renzi and Greenspan agreed on a plan that included a first step of controlling invasives in the meadow and elsewhere on the property. “But, we failed to communicate to the landscape crew not to cut the invasives—we needed them to be visible so I could treat them,” says Renzi. In addition the landscape crew was cutting the meadow down, mistaking it for a lawn. 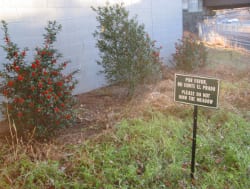 “Fast forward to Fall 2012,” continues Renzi. “Signs are in place asking the landscape crew to avoid mowing the meadow (see photo). I’ve identified the plant mix in the meadow so we can keep working on encouraging the desirables.” Renzi notes that the current mix includes a heavy proportion of vetch, which may need to be ameliorated. “Also in Fall 2012 I treated bittersweet and knotweed, as they were quickly taking over areas of the meadow and rain garden. I used pulling for the small plants, targeted foliar spraying, and the ‘bloody glove’ method which involves wiping down individual plants with a treated glove. In the spring of 2013, we’ll be back to assess invasives control and plan forward on the meadow area. I agree with Larry Weaner, the nationally recognized natural landscape and meadow designer, that we must plan for management of our plantings over time, as they do evolve. We can try to control them to our liking, or see what works and go with that,” comments Renzi.

“Designing a restoration around Dr. Greenspan’s new building had been an ongoing project in our office for a few years,” says Sloan. “The parking area and building-surround plantings were in and the doctor had had a chance to observe the landscape over a period of time. He called asking us to address the next goals, which were to solve a storm water problem in the parking lot, and to create bird habitat in a quiet area at the rear of the building.”

Sloan visited the site after a downpour and found that the sloped parking lot was directing storm water to an old, compromised city drain system (see photo). An ugly, muddy pond formed over the drains and flowed up over the parking area every time it rained. Research with old city plans (and with a flashlight on site!) revealed that the office building had been built in a former industrial site and directly over an old spur road with an ancient drain system whose level of functionality was “basically lost in the mists of time,” says Sloan.

“It was obvious a rain garden would be a great solution here,” she comments. “The drain system was not functioning, and we had plenty of room for a large rain garden that could catch the water and allow it to infiltrate naturally. The idea was to divert the water away from the drains and to their side. The garden would be a beautiful addition to the landscape, would function to handle the water, and the old drains would be there for any overflow that might occur in a large storm event.” 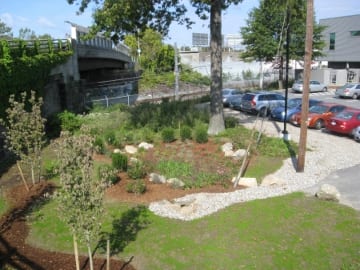 The rain garden was designed in a biomorphic form, using native plants and shrubs, with native stone boulders set in for a natural effect. Sizing calculations were made according to Rhode Island’s Storm Water Guidelines, which came into effect in 2011. Also, the rain garden features the mandated gravel forebay and grass infiltration strip at the lip where water enters. “Even a rain garden must have a forebay; this is something we learned in our training around the new Rhode Island Storm Water Guidelines,” says Sloan. “The forebay catches contaminants and begins the cleansing process before the water even gets into the garden.” In addition the rain garden’s planting medium is a special soil/sand/compost formulation that is custom mixed for GLA/BETA. 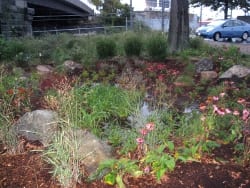 After a rainstorm, water diverted to the rain garden slowly infiltrates.

Creation of the bird habitat was a fun process that involved enhancing plantings already on site. “The area Dr. Greenspan had in mind was in the meadow, by the employee picnic table,” says Sloan. Wildlife was already being attracted to the meadow. A woodchuck the staff affectionately named ‘Chuckie’ had been making daily appearances. Now Greenspan wanted to make the area more hospitable to birds. “We planted clusters of several varieties of berrying shrubs such as viburnums,” says Sloan. “The most important addition in this wide-open industrial area was a nicely-sized, densely-branched evergreen tree.” To provide cover, perching space, and hopefully nesting space, an expressive Weeping Alaska Cedar (Chamaecyparis nootkatensis) was planted. Greenspan will add a birdbath next year; the meadow provides plenty of seeds and insects, and the shrubs provide berries to nourish the birds.

The ecological landscape at Gastroenterology Associates is an evolving one, as all landscapes should be. “It is a delight to work on this landscape,” says Sloan. “I love to visit, not only to check on how things are working, but also just to enjoy it for a moment in a busy day. It’s a beautiful place that really does feel like an oasis in the middle of the city.” 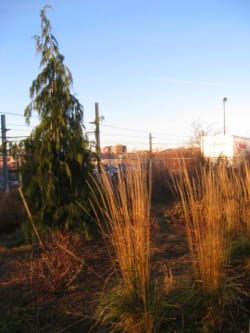 Sloan notes that once when she was visiting to check the rain garden, a bicyclist zoomed past, messenger bag slung over his shoulder. “Please tell the owner thank-you,” he called out, “I go by here every day and it’s so beautiful!”

Sloan echoes this feeling. “Every landscape architect waits for a chance to work with those enlightened clients who are willing to do the right thing, take a chance on new methods and ideas, and be flexible about the process and the timeline,” she says. “Dr. Greenspan is one of these clients. By supporting ecological landscapes, he is supporting a better future for our urban areas.”

Amanda Sloan is a landscape architect with GLA Landscape Architecture division of BETA Group. At GLA/BETA she works on parks, conservation developments, storm water design, and planting design throughout New England and assists with presentation graphics and writing. She achieved certification by the Rhode Island Coastal Resources Management Council in Invasive Plant Management and has taught landscape design and low impact design techniques through Groundwork Providence. Amanda may be reached at asloan@beta-inc.com.

Dave Renzi is president of Out in Front Horticulture, Exeter, RI. Whether saving 100 year old European Beech, controlling 235 acres of invasive plants, or removing invasive plants and replanting with natives in a coastal situation, Dave focuses preservation and management with intentional listening to deliver client goals. Hemay be reached at treefairy@cox.net.