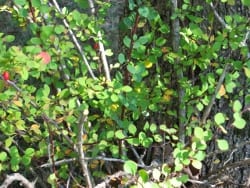 General Description: Japanese barberry is an exotic invasive shrub that is well established in home and commercial landscapes. Ward and Williams (2011) report that this species is established in 31 states and four Canadian provinces. A popular ornamental deciduous shrub it ranges in size from three to seven or more feet in height (Johnson, 1996; Whitcomb, 1985). Shrubs that have not been pruned have a compact, dense form which is typically more broad than tall at maturity (Zouhar, 2008). Japanese barberry exhibits a high ornamental value plus it responds very well to pruning which is why landscape designers fell in love with this plant years ago.

Part of barberry’s ornamental appeal is that its alternate, simple leaves are arranged in clusters along the erect to arching stems enhancing its textural appeal in the built landscape (Dirr, 1998). Japanese barberry leaves can vary in size, shape and color depending upon site and soil conditions. Dirr (1998) states that its leaves vary from 1/2 to 1 1/4 inches long with short petioles and can range in shape from obovate (broadest at the middle) to spatulate (narrow at the base and broad at the apex). Horticulturists and other plant enthusiasts recognize that leaves vary in color and size among the many cultivars available (Johnson, 1996; Dirr, 1998).

Japanese barberry is mostly multi-stemmed with additional stems arising from rhizomes (Zouhar, 2008). Stems are notoriously noted for their spines making pruning tasks painful without leather gloves. Young stems are reddish in color, older stems are grayer. Showy bright red fruits (or berries) are about 1/4 inch long, oval elongate, and borne on the stems attached by a long slender stalk (Whitcomb, 1985). The red fruits, which are another desirable ornamental characteristic, persist into the fall and winter months.

Once established, Japanese barberry can tolerate a range of varying site and soil conditions. However, established plants do not grow well under droughty or prolonged wet conditions and will drop their leaves in response giving them an unsightly appearance. Garden soils or soil in natural areas where they have invaded provide best growth if sunny, fertile, moist, and well drained (Whitcomb, 1985). 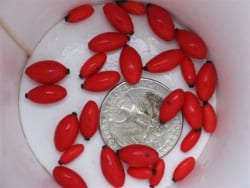 Barberry’s bright red fruit added to the shrub’s desirability as an ornamental species.

Red leaf forms and purple cultivars may lose their color under shade and revert back to a green color (Whitcomb, 1985). In invaded shaded woodlands, I have observed several specimens with dilute purple color, and because of persistent shade, they exhibit a green-purple hue to full green.

The root system of Japanese barberry is shallow with fibrous fine roots; rhizomes (under ground reproductive stems) grow out from the plant’s root crown (Zouhar, 2008). Above ground sprouts can arise from the rhizomes allowing this plant to spread into new and adjoining spaces. This growth characteristic allows barberry to be pruned into hedges quite effectively. This shrub can produce large numbers of fine fibrous roots during the growing season compared to native shrubs of the same size. Zouhar (2008) presents a New Jersey study in which Japanese barberry root biomass was compared to native blueberry shrubs of similar ages that were growing together in an invaded area. The results showed that the Japanese barberries had three times more root biomass than the native blueberries. In that study, the Japanese barberries had the competitive edge over the native blueberries by being able to direct growth into root mass more effectively over the growing season.

Japanese barberry is native to China and Japan (Dirr, 1998; Whitcomb, 1985; Zheng et al, 2006). It was introduced as an ornamental to the United States in the 1860s (Dirr, 1998). Roots and stems have high berberine content (Zheng et al, 2006). As an exotic invasive shrub it has invaded open woods, woodland borders, pastures, fields, waste lots, abandoned building and house lots, roadsides, and natural area paths (Magee and Ahles, 2007). This species is not as prolific an invader as Asiatic bittersweet vine or glossy buckthorn. However, it spreads from home and commercial gardens to natural areas that serve as suitable habitat for its germination, growth, and establishment.

(1) High seed production and good seed viability. Seed production is related to stem density (i.e. abundance) and is much higher when plants grow in direct sun light (Zouhar, 2008). However, Zouhar (2008) reports that some seeds were produced under very low sun light levels. Seed bank abundance is very low which is possibly due to low seed germination potential (viability) combined with seed predation by insects and small mammals (Zouhar, 2008).

(2) Vectors. Seed is dispersed by birds and other berry feeding animals, sometimes over great distances. However, most seeds fall relatively close to the parent plant which is why this species grows as clumps or thickets.

(3) Sexual reproduction breeding system. Breeding system is a monoecious condition whereby both male and female reproductive parts are consolidated into the same flower on the same plant (i.e. perfect flowers). Therefore, it only takes one Japanese barberry to produce a colony of reproducing plants if left unchecked.

Japanese barberry produces flowers from April to June and plant removal is best accomplished before seeds begin to ripen in July. Photo courtesy of IPANE.

(5) Predator avoidance and/or deterrence. Virtually there are no effective predators feeding on or killing this plant. Thorns help protect this plant from most grazing animals.

(6) The timing of leaf out and of leaf loss. Leaves emerge very early in the spring than most native plants. This species also holds onto its leaves a little longer in the fall than most native plants. This trait allows Japanese barberry to produce more carbohydrate and other compounds in the leaves by way of photosynthesis and transport these products to the roots for storage (i.e. cold weather storage for better winter survival and spring growth).

(7) Shade/sun tolerance. Japanese barberry is shade-tolerant. However, it frequently invades sunny spots which is why it is seen growing in open fields and pastures, along field edges, along roads and paths, open woodlands, and other sunny areas. 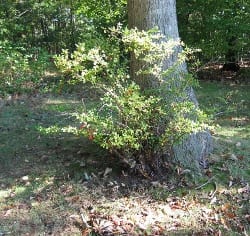 A Japanese barberry takes advantage of a sunny patch of dirt at the base of this white oak tree.

(8) Time of year of fruiting. This species flowers from April through June and fruits from July through October; fruits persist into the winter months (Zheng et al, 2006; Magee and Ahles, 2007; Zouhar, 2008). Japanese barberry is insect pollinated.

1. Cultural Controls: Monitor or visually inspect your property for Japanese barberry. Do this at least every June and September. As stated in Part II, IPM Control Strategies for Exotic Invasive Plants, prevention is a cultural control of great value. Do not plant or encourage the planting or transplanting of this species. Educating others (e.g. clients or neighbors) about the dangers of this pest is another cultural control of enormous value.

2. Mechanical Controls: Pull, dig, cut, and burn. Pull out easy-to-pull plants. If you can’t hand-pull Japanese barberry (be careful of the thorns!), then you can dig out the plant or pull it out with a Weed Wrench® . Spring or early summer cutting of Japanese barberry will slow its growth, but may not inhibit flower, fruit, and seed production. Repeated cutting of big plants or mowing seedlings on a monthly cycle will be more effective at stunting the plant and inhibiting fruit and seed (berry) production. Mechanical controls can be done at any time during the year; however, the best times are the months before or during flowering.

3. Biological Control: There are no commercially available insects, mites or disease organisms yet found to be effective biological control agents.

4. Chemical Controls: The best time for any control option is just before a plant flowers. In addition, the application of herbicides in July, August, and up to mid-September gives maximum chemical control. These are the months during which carbohydrates and other plant compounds are being manufactured in the leaves by way of photosynthesis and are transported from the leaves to the roots for storage. This downward flow of plant compounds helps facilitate the transport of foliar and stump applied herbicide to the roots for more effective kill. The mechanical control of cutting or mowing is also very effective during these months for the same reason. For example, when you cut the top off any plant, the roots naturally respond by pushing up more top growth (sprouting), reducing the root reserves (carbohydrates and other growth compounds) and stressing the plant. Every time you cut the top off, you force the plant to sprout which reduces the root reserves and weakens the plant.

Suggested chemical control during July, August, and up to mid-September is to cut Japanese barberry down to one inch from the ground and immediately apply straight glyphosate herbicide to the freshly cut stump using a paint brush or sponge applicator. Roundup ‘poison ivy killer’ works very well. Suggested chemical control in March, April, May, and June is to cut the stump (multiple stems) high (six to twelve inches) and let it sprout. Then cut the sprouted plant in July, August, or early September to one inch from the ground and stump-applicate with straight glyphosate herbicide.

1. Properly identify Japanese barberry. Educate your neighbors about what you are doing and why.

2. Hand-pull what you physically are able before Japanese barberry produces berries (seeds); preferably before July.

3. Use a Weed Wrench on hard-to-pull plants; preferably before July.

4. Plants that prove to be too difficult to remove by way of pulling or digging you can cut down to one inch stumps and immediately apply a glyphosate herbicide to the freshly cut stumps using a paint brush or sponge applicator. Stump application is very effective during July, August, and up to mid-September.

If you cannot stump-applicate the hard-to-pull plants during the summer months, then you can instead cut the plant six to twelve inches from the ground before it starts to produce berries (seeds) in July. After the taller stumps have re-sprouted, you cut them to one inch above the ground and immediately apply glyphosate herbicide to the freshly cut stumps. Allowing the stumps to re-sprout during the summer months draws carbohydrate and other growth compounds from the roots and depletes some of the root energy making herbicide kill more effective.

6. The above suggested example may be modified to suit existing site conditions and the level of infestation.

Bruce Wenning has university degrees in plant pathology and entomology and is an ELA Board member and regular contributor to the ELA Newsletter. Watch for his upcoming articles with information about additional individual invasive species. He is a horticulturist at The Country Club, Brookline, MA where he continues his battle with exotic invasive plant species. Bruce may be reached at bwenning@verizon.net.