Impervious surfaces increase the speed of the runoff and also add pollutants. Oils, salt, and sediment carrying phosphorous or other chemicals are picked up by the water as it travels and are all deposited into the Lake. Previous studies of Lake George have shown that about fifty percent of all contaminants entering the South Basin of Lake George arrive from the south via West Brook, and from there they travel throughout the Lake since the Lake flows north toward Lake Champlain.

The Problem to Solve

While rated AA-Special in New York, meaning one of its best usages is drinking water, Lake George is also currently listed on the New York State Section 303(d) List of Impaired/TMDL (Total Maximum Daily Loads) Waterbodies for sediment. The West Brook delta, a new feature that resulted from excessive sediment from stormwater runoff making its way into the brook and ultimately the lake, has grown to over 7,000 square meters and is easily viewed from the shoreline. Sodium levels have doubled in the last 20 years and total phosphorus levels have increased as well. In the Caldwell Basin, a deep-water basin located within the south basin of Lake George, dangerously low levels of dissolved oxygen have been documented during the last few weeks of summer.

Various projects aimed at remedying water quality concerns have occurred in the West Brook Watershed over the years. Some projects have been implemented upstream at specific locations throughout the watershed; a number of other projects have been considered, but for various reasons never started. In fact, a constructed wetland solution, located along West Brook, was drafted back in the early 1990s, but wasn’t able to move forward due to its proposed location on state-owned land. When a 12-acre property adjacent to the original site, formerly known as Gaslight Village, went up for sale, the wetland solution was back on the table 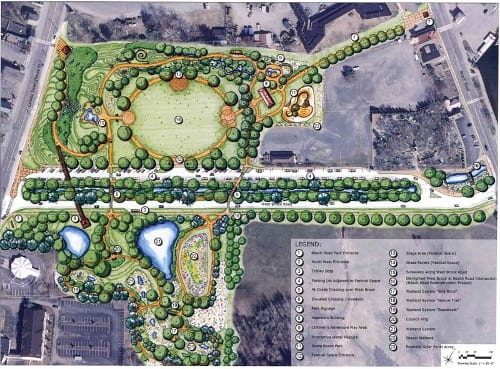 After building demolition, the project site surrounding West Brook was graded and coir logs were installed to prevent soil from entering the treatment ponds until plants and grasses could become established helping to stabilize the site. Part of the treatment swale/pond, located midway through the treatment process, that is filled with groundwater.[/caption]

The Lake George Association (LGA) helped keep the idea of utilizing the property to treat stormwater as a viable option and actively pursued the project, beginning with the purchase of the property in 2008. The LGA didn’t do it alone. To achieve its plans of a project that would protect Lake George for many years to come, the LGA helped to form a partnership with two other environmental organizations, the Lake George Land Conservancy and the Fund for Lake George, and two municipalities, the village of Lake George and Warren County. This property was a prime location for a commercial establishment such as a hotel or conference center, so it was quite a feat to secure it for an environmental park that would offer recreation opportunities alongside stormwater cleanup.

The two municipalities own the land and the three environmental organizations own the conservation easement over the land. The five entities formed a joint venture to oversee this historic project: the West Brook Conservation Initiative (WBCI).  In addition to the five original groups, other partners have contributed and continue to contribute to the project.

The Plan for Natural Stormwater Filtration

The original plan for the project was to construct a 12-acre environmental park that would treat not only stormwater runoff from Route 9 and the surrounding properties (approximately 90 acres), but also to redirect the brook back to its original winding meander along with floodplains. As the project design materialized with input from all parties, it was recognized that including the relocation of West Brook did not maximize the property to its fullest potential for all involved parties. The project should incorporate not just an environmental benefit, but also a benefit that would serve the local economy.  For this reason, the design team identified the southern parcel or “South Parcel” of the project site as the location best suited to treat stormwater from the watershed. The “North Parcel” was now wholly available to create a pedestrian park and festival space area that could be used to stage large events and could provide more walking trails. Both pieces of the project would be tied together and benefit the Lake and the local economy. 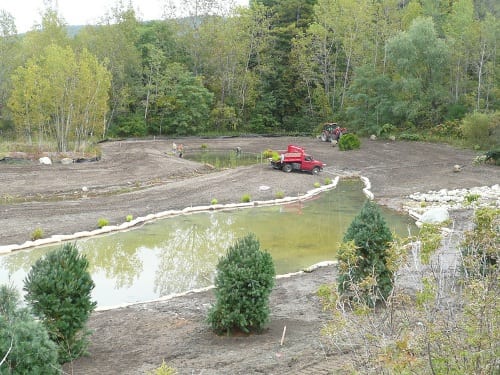 After building demolition, the project site surrounding West Brook was graded and coir logs were installed to prevent soil from entering the treatment ponds until plants and grasses could become established helping to stabilize the site. Part of the treatment swale/pond, located midway through the treatment process, has filled with groundwater. Photo: LGA

The focal point of the project is to treat stormwater using natural processes. The treatment is set up in stages that will allow clean water to flow into West Brook and then Lake George. The treatment process begins by diverting runoff coming down the Route 9 corridor and directing it into the site. Route 9 is four-lane, undivided highway and generates quite a bit of runoff. 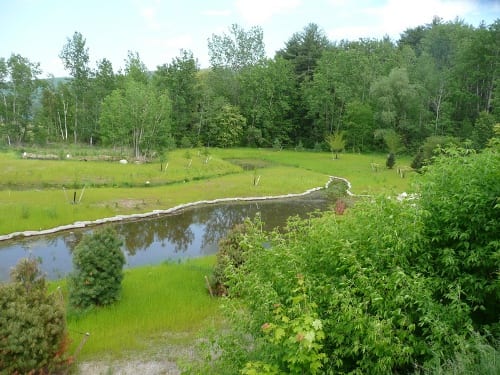 A photo take Spring 2013 shows the same area as above. Photo: LGA

The stormwater first enters a forebay pond where sediments can settle out as the water slows. The stormwater then meanders through smaller ponds and vegetated swales with flow controlled by rock weirs. Many different types of aquatic vegetation planted along the treatment path absorb nutrients carried in the stormwater. (Refer to plant list at the end of the article.) Toward the end of the treatment, the stormwater is split into two different types of wetlands and is again controlled by a rock weir. The main flow goes into a deep-water wetland, and as the water level rises during storm events, some of the flow splits off into a gravel wetland. The deep-water wetland and gravel wetland are the final treatment steps in the process. In an effort to keep the water flowing into West Brook at cooler temperatures after treatment in the wetlands, the water is removed from the bottom, rather than the surface, of the deep-water wetland and the gravel wetland. 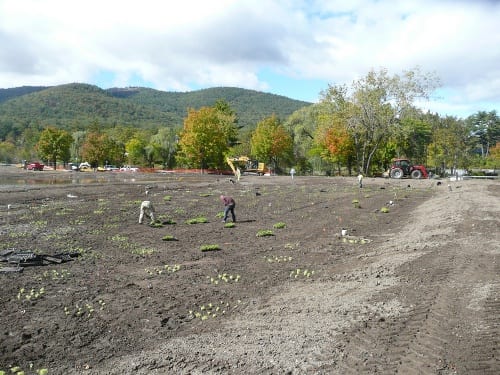 The plant contractor planted over 1,800 seedlings trees, shrubs, plants, and plugs in the swales, benches, and surrounding area the project site, including the gravel wetland shown here. Photo: GLA

Gauges installed on August 20, 2013, have initiated flow records for the site and water chemistry in the multiple ponds that are part of the constructed wetland complex is also being tested periodically. Rough grading of park structures on both parcels was originally planned for September, but was pushed back. With the delay of the construction of the pathways, the project partners “turned on” the system on October 4, and it is now receiving and treating the stormwater entering from Route 9. As with any project of this nature, constructed wetlands are somewhat dynamic and need to be closely monitored. Darrin Fresh Water Institute (DFWI) is monitoring the stormwater entering and leaving the site. The project partners have also been monitoring the gravel wetland water levels and completed some mowing and weeding of vegetation to assist the plantings from 2012 that were in need of some care and will be part of the long-term maintenance for the park. 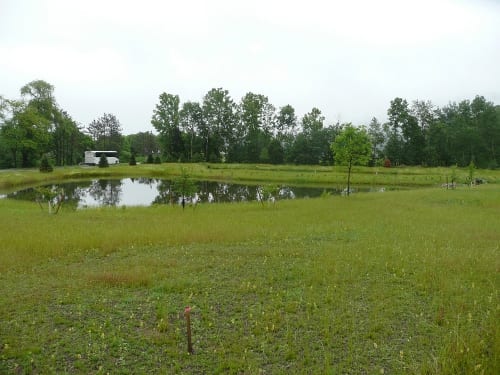 With the natural stormwater filtration system in place, plans for the rest of the park will be underway and completed by 2015. The entire park with nature trails, children’s adventure area, exhibits, gazebos, skate park, benches, overlooks, and native plantings will greet visitors as they arrive. Trails will meander throughout the two parcels that offer overlooks and interpretative signage. Signs will discuss water as a vital resource and explain the processes that are filtering the stormwater, including the types of plants and structures that are doing the work. We hope the park’s take home message for visitors will be both a better appreciation of our relationship with water and an understanding of the natural filtering system that is treating millions of gallons of stormwater before it enters Lake George. 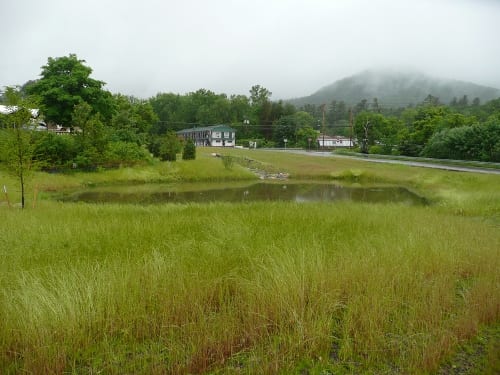 Stormwater will enter from Route 9 directly into the pond. View is toward the forebay pond. Photo: GLA

To date millions of dollars of grant money have been contributed to this entire project. The West Brook Conservation Initiative has received funding from New York state including the Department of Transportation, Department of State, Office of Parks, and Historic Preservation;  a number of private grant foundations including Charles R. Wood Foundation, Wright Foundation, and the Helen V. Froehlich Foundation; as well as local sources. The State Historic Preservation Office, Adirondack Park Agency, the Department of Environmental Conservation, and Army Corps of Engineers have all had input on the project as well. The estimated total cost of the project when complete will approach $15 million.

How We Got Here & Where We’re Going

One can imagine that getting all of the involved parties to agree on the direction of the project was no small feat. Chazen Companies was charged with that task in 2007 as they created the original concept plans for the stormwater treatment plan and festival space. The closing on the Gaslight property was finalized in March of 2008 with demolition of the buildings on the site beginning in 2010 and wrapping up in 2011. The rough grading of the site soon followed the demolition stage. Construction of the stormwater treatment complex on the south parcel was completed in the fall of 2012 with the planting of 1,800 native trees, shrubs, plants, and plugs. Starting in 2011 and continuing through today, Elan Planning and Design has fine-tuned the final design for the environmental park and has nearly completed the final design of the festival space and park.

Some of the native plants installed in the West Brook Conservation Initiative: 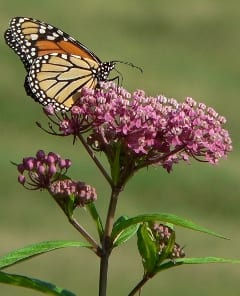 Randy Rath is Project Manager for the Lake George Association (LGA) and is part of the team that has and will continue to work on the West Brook Conservation Initiative. Founded in 1885, the LGA is a member-supported, nonprofit organization that includes families, businesses, summer residents, and donors who support Lake George. Find out more by visiting www.lakegeorgeassociation.org. Randy may be reached at rrath@lakegeorgeassociation.org.

Hindsight Is 20/20: The Importance of Off-season Planning
Practical Application of Tree Filter Systems