Japanese spirea, winged euonymus (burning bush), red barberry, evergreen azaleas, boxwood, forsythia, cotoneaster, blue or pink hydrangeas, andromeda, lilac, etc, these are the denizens of garden centers and the garden departments of big-box stores. Native to other countries, these and many other popular species were cultivated for certain design characteristics, such as size, shape, bloom color, and foliage color. They became so dominant in the nursery trade that it can now be challenging to find indigenous alternatives. Some of these plants, such as barberry and winged euonymus, became invasive to the point where woodlands are sometimes overtaken by these shrubs, and native plants have been forced out. 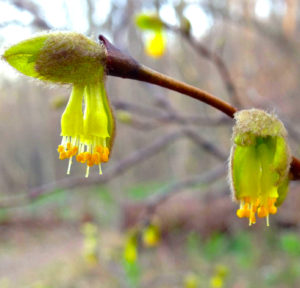 Growing native plants helps to support songbirds, pollinators, and other beneficial insects, many of which are increasingly threatened due to loss of habitat (among other factors). In recent years conservation groups have urged the creation of backyard and municipal habitats to partly offset this massive habitat loss. Douglas Tallamy, (author of Bringing Nature Home, Nature’s Best Hope, and other books) writes that native insects and other animals evolved to rely on indigenous plants and that birds in turn depend on the local insects. But the term “native” can be a bit slippery. For instance, Virginia sweetspire (Itea virginica) is indigenous to areas in the mid-Atlantic, south, and Midwest, but not to Connecticut, where I live. However, it has many fine qualities and is hardy to zone 5. I feel that if a garden has a wide range of locally indigenous plants, which can be checked on the USDA native plant database, then adding a plant native to another region should not be harmful – provided it isn’t invasive. Try to avoid plants altogether that hail from other continents or even regions of our country with radically different growing conditions. 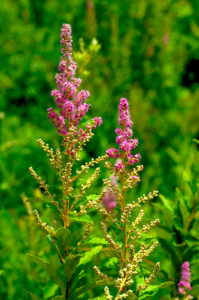 “Nativars,” cultivars of native species, are increasingly common in the nursery trade. An example is ‘Gro-Low’ fragrant sumac (Rhus aromatica), a superb, low-growing form of the native shrub. Some nativars can be as good for wildlife as the species. But gardeners need to be cautious of cultivars with innovations like double or triple blossoms, which often inhibit pollinators’ ability to access the nectar and pollen inside. And some cultivated plants, such as ‘Annabelle’ smooth leaf hydrangea (Hydrangea arborescens) have infertile flowers, making them useless to pollinators whereas the species’ flowers are all fertile. Recent research by Douglas Tallamy and Annie White into nativars’ value to wildlife resulted in mixed conclusions. Tallamy studied six plant traits and found that “the usefulness of native cultivars in restoring insect-driven food webs depends on the cultivar trait that has been selected.” Plants bred to have red or purple foliage, for example, repelled the insects that would normally be attracted to them. White studied nativar flowers and found that pollinators usually preferred the native species, but not always. She summarizes, “Some native cultivars may be comparable substitutions for native species in pollinator habitat restoration projects, but all cultivars should be evaluated on an individual basis.”

Following is an abridged list of native shrubs, generally 2 to 6 feet high, 2 feet wide, and native to the Northeast, these are good substitutes for commonly used exotics. Future articles will explore larger shrubs/small trees, and large trees.

Chokeberry, blueberry, or maple-leaf viburnum instead of burning bush 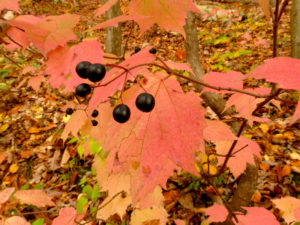 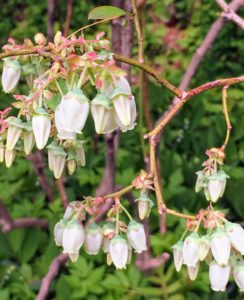 Burning bush or winged euonymus (Euonymus alatus) is popular for its brilliant red foliage in the fall, but it is terribly invasive. Native shrubs that offer similar fall coloring include black chokeberry (Aronia melanocarpa, 3’-5’ high), red chokeberry (A. arbutifolia, 6’-10’ high), blueberry (Vaccinium corymbosum,3’-4’ high), and maple-leaf viburnum(Viburnum acerifolium 4’-6’high). The aronias have a narrower, more upright form than the euonymus; therefore, one might opt to plant three together to achieve a similar massing effect (although they sucker, forming good masses over time). Highbush blueberry (Vaccinium corymbosum) requires acidic soil and grows slowly but is a terrific shrub with excellent fall color and high wildlife value. Lowbush blueberry (Vaccinium angustifolium) only grows to 2 feet high but has all of the benefits of its taller cousin. We will explore the many great native viburnums in the next article because most grow quite large, but maple-leaf viburnum (4’-6’ high by 4’ wide) is a gem. Very shade tolerant, it offers cymes of delicate white flowers in early June, blue-black berries in fall and winter, and gorgeous pink and red fall foliage. As its name implies, the leaves resemble those of red maple. It also attracts butterflies and many birds.

Inkberry instead of boxwood 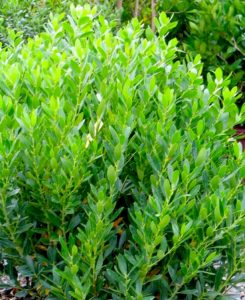 There are many species of boxwood (Buxus spp.), but in general, it is grown for its broadleaf, evergreen foliage, and tight growth habit. It is used most commonly for massing, hedging, and framing (say, at a doorway). Recently though, it has been subject to boxwood blight, a devastating fungal infection causing widespread damage and death. Inkberry (Ilex glabra) is a native broadleaf evergreen that produces dark blue berries (not particularly showy, but attractive to birds) and grows in many different conditions, including dense shade. Inkberry can also be pruned but tends to have a looser growth habit than boxwood, and the species becomes leggy over time. Removing a few branches from the interior of the plant in spring will encourage new and fuller growth.* The cultivars ‘Compacta’ and ‘Shamrock’ will stay smaller and tighter than the species. A more recent introduction, ‘Strongbox,’ is said to have a tight, rounded habit with low branching. Inkberry attracts songbirds and turkey, as well as honeybees and many other pollinators.

Summersweet clethra or bush cinquefoil instead of various exotic spireas 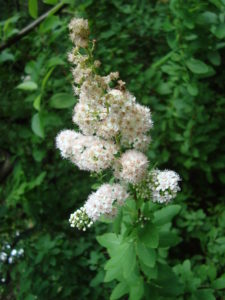 There are many species and cultivars of spirea. They can be reliable garden stalwarts, although, in my experience, they sometimes die from no apparent cause. They come in varieties with light pink, dark pink, or white flowers, and many of them bloom for a long time beginning in the spring. There are native spireas: meadowsweet (Spirea alba var. latifolia) and steeplebush (S. tomentosa), both 2’-4’ high. But they may be difficult to find in nurseries and may be best for naturalizing. (However, they are valuable plants; meadowsweet supports 82 species of Lepidoptera.) Summersweet clethra or sweet pepperbush, (Clethra alnifolia) is quite widely available. Although technically a wetland plant, it can thrive in drier soils. It blooms later and for a shorter duration than some of the spireas, but it is a pollinator magnet (honeybees adore it) and also supports many birds. The species and the dwarf hybrid ‘Hummingbird’ have white flowers, whereas the cultivar ‘Ruby Spice’ bears pink blooms. The dwarf ‘Sixteen Candles’ is said to be more rounded than ‘Hummingbird.’ Clethra bears yellow foliage in the fall and attractive seed heads. The species can reach a height of 8 feet. Another good native plant, bush cinquefoil (Dasiphora fruticosa, formerly Potentilla fruticosa), can make a good replacement for the lower-growing spireas. The species blooms in yellow, but cultivars offer white and pink blooms as well. Most cultivars grow 2’-4’ high. Cinquefoil attracts pollinators, including two specialist bees.

Carolina and Virginia roses instead of hybrid roses 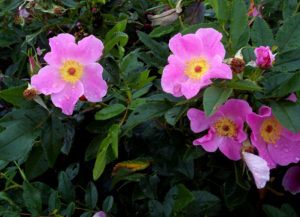 People are passionate about roses! Unfortunately, roses are extremely high maintenance, and gardeners often rely on a host of chemicals to keep them disease-free. They are of little use to wildlife, although pollinators can utilize single rose flowers. Carolina or pasture rose (Rosa carolina), and Virginia rose (Rosa virginiana) both bear fragrant, single, pink blossoms in June, followed by red hips that last well in winter both have a suckering habit. Swamp rose (Rosa palustris) is another native bearing single, pink blooms, but it needs moist soil. These roses attract butterflies and other pollinators, as well as many birds. To encourage a tidier appearance, thin canes and cut the roses back in spring.*

Mountain Laurel instead of evergreen azaleas

There are several marvelous native azaleas, but they are deciduous and many fall into the category of larger shrubs. The popular evergreen azaleas are from Asia and offer a variety of bloom colors but little value to our native wildlife. Mountain laurel (Kalmia latifolia) is a broadleaf evergreen that blooms in June and has beautiful, striated bark and, with age, picturesque branching. The species bears white flowers and can grow to at least 7’ high (very slowly). Various cultivars are shorter and more rounded and have flowers ranging from white to red and even bicolored. Mountain Laurel is adaptable to different light conditions but does appreciate some afternoon shade in hot locations. It supports a variety of insects, including butterflies, as well as hummingbirds and many other birds.

There are many additional smaller native shrubs with terrific design characteristics, but space does not permit me to describe them all in depth. Following is a brief list of admirable shrubs (with a shout-out to Darryl Newman of Planters’ Choice Nursery, Newtown, CT, for his suggestions) that may not necessarily have obvious correspondence to exotics: 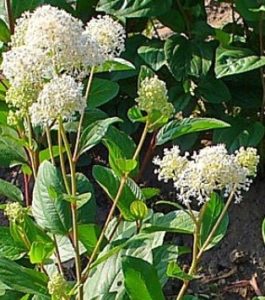 Despite its name, New Jersey tea is native from Manitoba to Texas and Florida. Highly adaptable and drought tolerant, it produces panicles of white flowers in summer and attracts 44 Lepidoptera species

Resembling a fern, this tough-as-nails shrub tolerates the leanest of soils and is also good for controlling erosion. Its aromatic foliage (said to make a nice tea) attracts 62 species of butterflies and moths.

Another very tough plant, dwarf bush-honeysuckle is a good substitute for the invasive Asian honeysuckle shrubs. Its yellow flowers appear in June and July and attract butterflies and hummingbirds.

This woodland shrub prefers moist, shady locations. It bears pale-yellow flowers from March to April and yellow-green leaves in spring that mature to green and then yellow in fall. Its leathery bark and pliable stems were used by indigenous people for many purposes. Leatherwood attracts many butterflies, caterpillars, and birds.

This perky, rounded shrub has bright yellow flowers from June to August, blue-green foliage throughout the season and attractive seed capsules in winter. It attracts pollinators and birds. 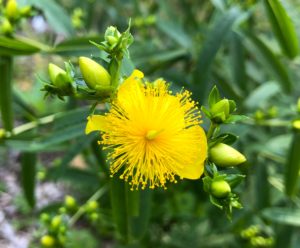 Pollinators and other creatures desperately need habitat, more than we need certain color palettes. As a novice designer, I eagerly absorbed lessons on organizing spaces, combining flowers and foliage in interesting ways, and massing vs. specimens. These lessons still apply, but as I’ve learned more about our changing world and the many threats to wildlife, I now strive to design landscapes that are as beneficial to birds and insects as they are to humans. I believe that this is an achievable and necessary goal, which may result in fascinating new approaches to landscape design. And while the beauty of native plants can be more subtle than the riotous colors and huge flowers of popular exotics, the joy of having hordes of fluttering, buzzing, chirping visitors enjoying the many other gifts they offer is priceless.

Sarah W. Middeleer has a Master’s degree in landscape architecture. Following a spinal cord injury in 2008 she has focused largely on environmental advocacy and designing outdoor spaces that support birds and pollinators. She is the Connecticut captain of the national group Birdability.