By ecopro on November 14, 2012 in Urban Landscaping 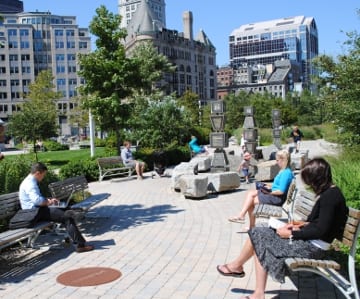 The Harbor Fog Section of the Wharf District Parks features artwork and a misting fountain.

The Greenway was built atop the main north/south tunnel of the Central Artery by the State of Massachusetts, which replaced a 1950s era elevated highway in a project known as the Big Dig. Its 15 acres of parks, spread along 1.5 miles of downtown Boston, were designed by different firms with extensive input from neighborhoods, the city and the state.

Initially, the Greenway was maintained by the State of Massachusetts during the multi-year construction effort to complete the parks. The Conservancy worked to raise funds to provide programming and support and was slated to take over operations sometime in 2012.

The Conservancy Takes the Lead

With the financial crisis of 2008, the State asked the Conservancy to take on maintenance and operations in early 2009. Given the transformation of the site from elevated highway to roof garden over a highway tunnel in the center of the city, the Conservancy decided that an all organic approach was the only way to go. With over one million visitors each year, our operations team works diligently to ensure that the Greenway is a walkable, healthy, thriving and green public amenity in the heart of Boston. 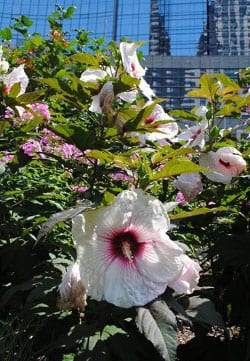 Plantings at Fort Channel Park appear against a backdrop of high-rises buildings. 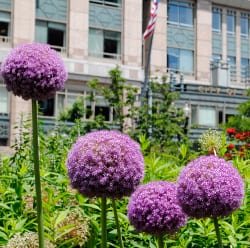 Because of the Conservancy’s ground-up approach that encompasses all living things on the greenway including soil, plants, and trees, children and pets can freely and safely play on our park lawns without the worry of pesticides. Our plants are healthier, more resilient, and better able to withstand the wear of public use. The Conservancy’s practice of not using herbicides and toxins also ensures that run-off from the parks will not pollute Boston Harbor or harm the delicate marine life.

Products required for the maintenance and upkeep of the Greenway’s landscapes are sourced with strong consideration to the manufacturing and transportation processes as well as the vendor’s proximity to the Greenway. We use a local source for the majority of our turf care products including fertilizers and seed. Mulches, compost, and container mixes used on the Greenway consist of organic byproducts. To ensure proper and timely applications of organic products, our staff conducts regular physical assessments of all plants in combination with soil testing.

All organic debris generated in the park is collected on-site for composting and is later applied back on to the Greenway in the form of mulch and compost. We currently apply over 300 cubic yards of compost annually. 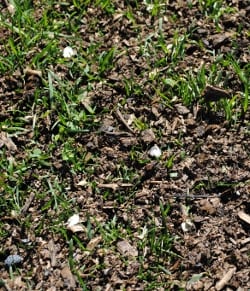 Organic material generated on the Greenway is returned to the park as compost.

The Conservancy brews its own Compost Tea and applies it to the Greenway regularly between April and November. We currently brew and apply over 12,500 gallons of compost tea annually. Ingredients used in the production of our Compost Tea include fish emulsion, humates, molasses, oats, worm castings (from our year-round Vermiculture effort) and organic vegetable and fruit scraps from the Dewey Square Farmer’s Market. These ingredients are all natural and provide the right combination of nutrients plus a bacterial trigger to activate the compost tea. Our Compost Tea Brewing operation also serves as a hands-on learning module for our Green & Grow Teen workforce development program. 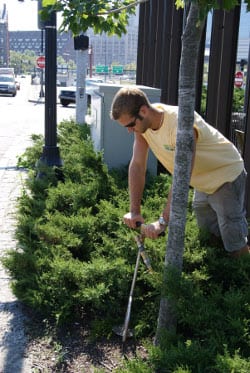 The Greenway Conservancy is also committed to proper water resource management practices utilizing rain sensors throughout the Greenway parks. These rain sensors are calibrated to recognize how much water has been received via rainfall. The irrigation practices that we employ reduce the Greenway’s overall annual water consumption through regular auditing of the system’s water usage, quick detection of leaks and malfunctions, and frequent updates of the duration and frequency of run cycles. 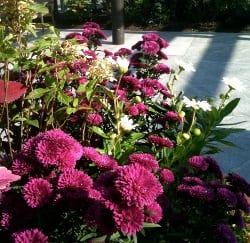 The Conservancy is committed to operating and maintaining the Greenway in an environmentally responsible manner that minimizes our carbon footprint on the planet. Our goal is to provide year-round botanical interest, contributing to a beautiful setting and an enjoyable environment. The Conservancy’s horticulture staff relies on the use of native plant species and additional non-native, non-invasive plant material with a proven record of adapting to the existing environmental conditions and urban stresses of the parks. The Conservancy implements the design practice of selecting “the right plant for the right place” when introducing new plantings or when relocating existing plants. We implement this practice in a way that accounts for the social and environmental impacts of the materials being used. 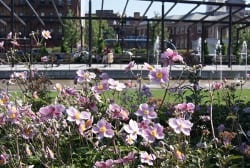 The North End Park plantings, like those throughout the park, strive to get the right plant in the right place.

The Greenway is free of genetically engineered organisms and takes into consideration the creation and preservation of wildlife habitat in the parks. Native plants are used, to provide seed heads and fruit for native birds to feed on year-round. This contributes to the well-being of both plants and wildlife.

The typical practice of fall cutbacks is kept to a minimum in order to retain winter interest for aesthetics and wildlife food source and habitat. We transplant trees and shrubs whenever possible to re-use plants and trees. An effort is made to transplant existing plant material whenever possible and appropriate when construction projects are planned.

Organic green turf and weed management practices include the mowing of lawns at a height of three inches to deter weed development, alternating of mowing patterns to avoid compaction, and the regular practice of maintaining mowing equipment to ensure blade sharpness which properly cuts turf resulting in less stress and less opportunity for disease issues.

The Conservancy uses alternative means of weed control including flaming, hand removal, and products that use clove oil or citric acid. These methods utilize heat and naturally occurring compounds to disrupt plant cell activity in weeds. 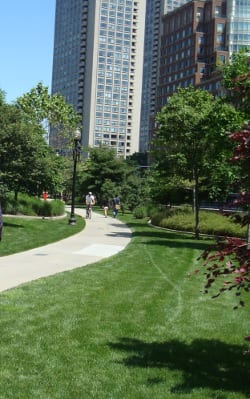 Educating the public about organic lawn care is part of the Conservancy’s mission.

Annual spring and fall lawn care applications include aeration of lawns to alleviate compaction with the addition of compost top dressing and humates and over seeding to promote dense turf development. We apply organic fertilizer four times a year: spring, summer, early fall and mid-fall.

However, organic methods will not remove every single dandelion. The Conservancy strives to elevate the level of tolerance for weed growth through public education around organic practices. Additionally, the horticulture staff monitors Greenway parks for wear and tear and proper plant health. Park guidelines encourage the rotation of recurring programming and special events between several lawn areas. 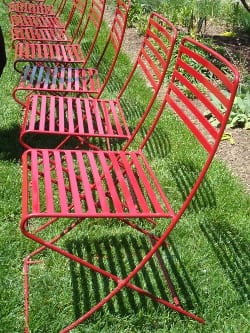 At Fort Point Channel Park, moveable lawn chairs encourage use of the entire space and help avoid wear and tear on lawns.

Operations vehicles include plug-in electric vehicles, and small fuel-efficient park vehicles which use less fossil fuel than larger vehicles and require fewer natural resources to manufacture. We employ bicycles for Conservancy personnel to get around, and we use quiet, fuel-efficient gas powered backpack blowers, generators, and other tools.

The Conservancy strives to be a leader in implementing sustainable landscape practices, to cultivate broad community support for and partnership in “greening” the Greenway, and to promote public education about the importance of responsible land stewardship.

Stu Shillaber is the Superintendent of Horticulture for the Rose Kennedy Greenway Conservancy in Boston. Stu has owned his own landscape company and worked at the Central Parks Conservancy in New York City. You can reach Stu at sshillaber@rosekennedygreenway.org