By Maureen Sundberg on November 11, 2017 in Gardening Basics, Trees

story and photos by Rob Zimmer

Printed with permission by the Wild Ones Journal and Rob Zimmer

Nature provides stunning seasonal beauty with the many species of conifers that call North America home. They thrive in just about every habitat, and make exceptional landscape choices for those who wish to bring nature home, especially for winter wildlife food and shelter.

Native conifers can be separated into three families: Pine (Pinaceae), Yew (Taxaceae), and Cypress (Cupressaceae). All are wind pollinated. Pines, spruce, tamarack, hemlock, and fir trees are in the pine family. Canada yew is in the yew family, while white and red cedar and bald cypress are in the cypress family. Learning to identify the different conifers by their appearance, foliage, and cones is a fun and interesting way to explore the natural world.

Following are some tips to help you get started. 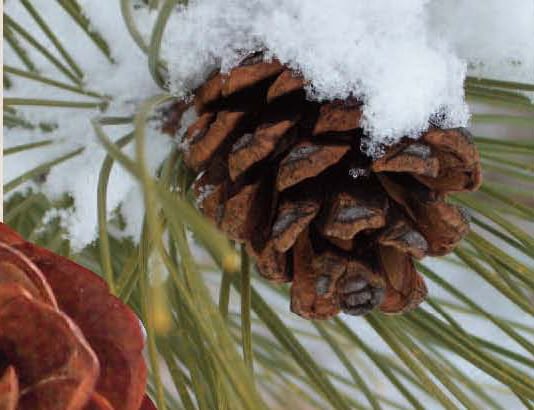 Pines can be identified by their longer needles in bundles.

In general, pines can be distinguished from spruces by their thin needles that grow in clusters. The long, fine needles of white pine (Pinus strobus) are arranged in bunches of five at branch tips. These wispy needles give the tree a soft appearance when viewed from a distance. The slender cones of white pine are about 5 inches long. Look for this widespread species in sandy soils.

A tall northern tree, the red pine (Pinus resinosa) has long stiff and brittle needles in clusters of two. When bent, the needles break. Its short woody cones grow on the tips of its twigs. Jack pine (Pinus banksiana) is a smaller scrubby tree that needs an open sunny habitat. Look for bundles of two short needles, and tight cones that need fire to open for seed dispersal. 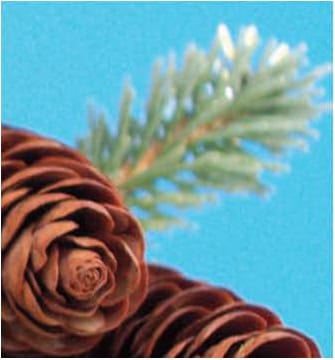 Spruces can be identified by short, sharp, square needles.

In general, spruces feature short, sharp needles that individually grow out of short woody pegs that surround its stems. Their needles are square in cross section, unlike firs that have flat, soft needles.

Black spruce (Picea mariana) and white spruce (P. glauca) are the most common native spruces. The cones of spruces tend to be more papery and smaller than those of the pines. Black spruce are common in the soggy soils of northern swamps and bogs. While white spruce can grow as an associate, it can also grow in a larger range within mixed forests and near streams.

Red spruce (P. rubra) is also found in the north, but persists at windswept higher elevations in the Alleghenies and Adirondacks. Adapted to harsh weather, spruce grows tight grained and elastic wood — perfect for musical soundboards of stringed instruments. A western cousin, Colorado blue spruce (Picea pungens) has been used for traditional landscaping throughout the east, far from its native central and southern Rocky Mountains.

Growing in northern areas from the Great Lakes to as far as coastal Alaska, creeping juniper (Juniperus horizontalis) is well adapted and reduces erosion on gravely and sandy hillsides, dunes and grasslands. With foliage similar to eastern red cedar, this juniper is identified by its low­growing, sprawling habit, rather than as a classic, upright tree. In some locations, this shrub may reach no more than a foot in height. It is state­listed as endangered or threatened in at least six states. 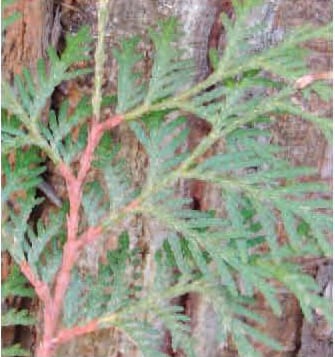 White Cedars can be identified by their leathery and flat scaly leaves.

Eastern white cedar (Thuja occidentalis), commonly known as arborvitae, grows in many areas of the upper Great Lakes and northern U.S. Preferring moist, swampy soils, this tree forms dense cedar thickets where it grows in combination with balsam fir, hemlock and yellow birch. This conifer can be identified by its flat, thick, fan­like foliage and little, brown clustered cones.

Eastern red cedar (Juniperus virginiana), also called juniper, is quite different from white cedar. Red cedars sport beautiful female cones that look like waxy, blue berries in fall and winter. The foliage is sharper than white cedar and the reddish heartwood is quite fragrant. Slow growing, red cedar prefers upland, slightly dryer areas than white cedar, and is often a pioneer tree in fields and prairies.

The great hemlocks (Tsuga canadensis) that tower over the steep ravines and bluffs along the Niagara Escarpment and Lake Michigan shore are my favorite old growth conifers. With short, flat needles aligned elegantly along each branch, these massive trees dominate areas such as Wisconsin’s Point Beach State Forest and Whitefish Dunes State Park. Slow growing, they flourish in cool, shady, moist habitats in eastern North America. Winter finches and cross­bills forage on their tiny brown cones for seeds.

ROB ZIMMER is a nature and garden writer in Appleton, Wisconsin. He is the author of the books Voices of the Wind: Four Seasons in Wild Wisconsin, Reflecting: Nature in Black and White, and Wild Seasons: The Beauty of Native Wildflowers, which are available on Amazon. Zimmer also speaks on a variety of native plant and gardening subjects. Visit facebook/RobZimmerOutdoors for more information.

Planting for Pollinators
A Word About Weeds