By Maureen Sundberg on November 17, 2014 in Meadows, Native Plants

What started out as a routine after dinner dog walk in the spring of 2012 resulted in the implementation of our municipality’s first Meadowscape to avoid annihilation by the weed police. 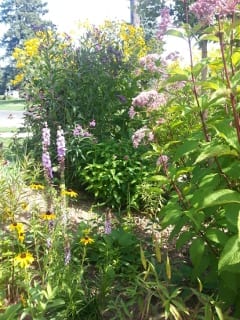 Inspired by Doug Tallemy, Catherine Zimmerman, and Diana Beresford-Kroeger, I designed a front-yard meadow for our new home.

While walking our dog that spring evening, my husband and I came across a vacant house for sale. Although the house was in disrepair, it was situated on a ravine lot adjacent to a city-owned natural area all within walking distance of urban amenities. The next day the house was ours and the de-turfing began.

The orientation of the house resulted in full sun at the front and full shade at the back allowing for two distinct plantings. As a landscape designer with a strong environmental bent, I had until this time confined native plantings to the backyard while opting for traditional landscapes at the front. As a result of reading Bringing Nature Home, Doug Tallemy; Urban and Suburban Meadows, Catherine Zimmerman; and The Global Forest, Diana Beresford-Kroeger, I was inspired to forgo convention and install a landscape that would mitigate stormwater, provide habitat, and increase biodiversity for all the world to see. 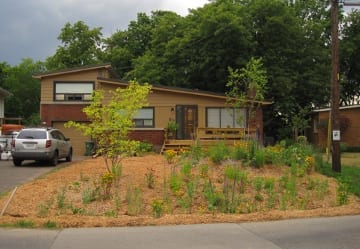 Use of plugs rather than seed helped the meadow take form quickly and avoided negative reactions from neighbors and bylaw enforcement officer.

In order to give the meadow the appearance of a designed garden, I opted to use landscape plugs rather than seed. This decision also helped to facilitate establishment of the plants. To dispel any concerns by neighbors that I was growing weeds, while at the same time taking a proactive approach to an anticipated visit from a bylaw enforcement officer, I selected plants that were available at local nurseries striving, to the best of my ability, to purchase plants that reflected local provenance.

The meadow was installed in September 2013, taking advantage of cooler temperatures and impending dormancy, and thus reducing the need for supplemental irrigation required for establishment. Since our neighborhood is built on a flood plain, the first step was to construct a rain garden, which mitigates runoff from our 1500 square foot roof. In this area a river birch (Betula nigra) serves as the focal point providing structure and all season interest. Perennials in this area include Joe Pye weed (Eupatorium purureum), swamp milkweed (Asclepias incarnate), blazing star (Liatris spicata), cup plant (Silphium perfoliatum), and New York ironweed (Veronia noveboracensis). 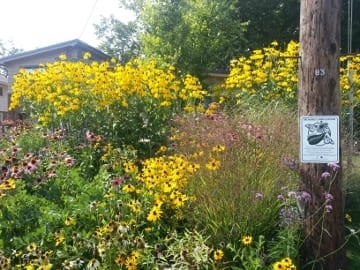 The sign designating our meadow as a Monarch Waystation attracted positive attention.

The meadow is registered as a Monarch Waystation through Monarch Watch and is posted accordingly. The sign has piqued the curiosity of pretty well everyone who sees it and has served as the best ambassador possible for the garden. Limestone boulders (which reflect the adjacent Niagara Escarpment) were added to provide weight to the landscape and sunning spots for birds and butterflies. 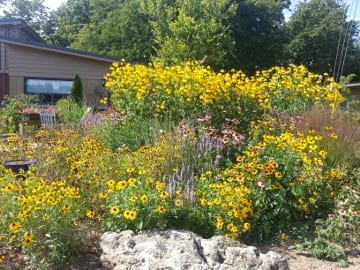 Limestone boulders in the meadow offer sunning spots for birds and butterflies.

In order to provide food and shelter for overwintering birds, I chose to leave the meadow standing through the winter. Apart from providing habitat and winter interest, I was rewarded with seedlings which filled in the gaps and gave the garden a more natural appearance. 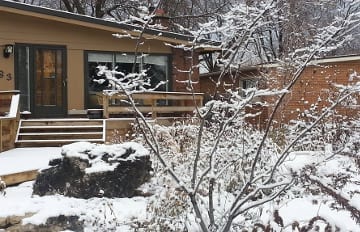 Plant material left standing over the winter provided food and shelter for wildlife.

The spring cleanup of the new meadow was completed in one day without the use of any power tools. While the Amelanchier canadensis provided early blossoms, I plan to plant Aquilegia canadensis this fall to provide early color as well as a nectar source for emerging pollinators. 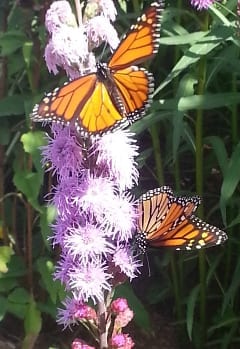 Our new meadow attracted many butterflies, including monarchs.

After completing a calendar year, this summer we were rewarded with a stunning display of color and texture and enjoyed a wonderful array of faunal associations including chipmunks, songbirds, bees, and butterflies too numerous to mention, but among them flew the stars of the meadow, the Monarchs.

With a few exceptions, the meadow has been well received in our community. I attribute this welcoming attitude to several factors including the use of familiar species, a designed approach, signage and most importantly, maintenance. While the meadow required few inputs to become established, (zero fertilizer, zero power tools, minimal water the first season) maintenance such as weeding and scouting for invasive species is ongoing although less is required as the meadow matures.

While this type of landscape is still an anomaly in our community, I believe the meadow has helped educate people on the importance of native plants in the landscape not only environmentally, but economically and aesthetically as well. In conclusion, I would like to quote Rachel Carson whose courage and foresight continue to inspire: “The more clearly we can focus our attention on the wonders and realities of the universe about us, the less taste we shall have for destruction.” ― Rachel Carson 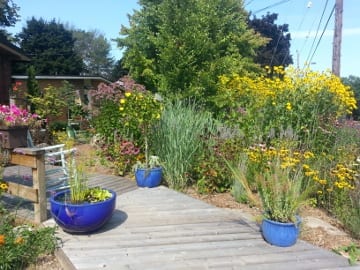 Silvana Valiani owns Silver Branch Horticulture in Stoney Creek, Ontario. Silvana is a certified landscape designer and ISA certified arborist. She has an Ontario Diploma of Horticulture and is a URI-certified Invasive Species Manager. Silvana teaches horticulture at Mohawk College in Hamilton, Ontario.