By Maureen Sundberg on November 15, 2015 in Landscape Design 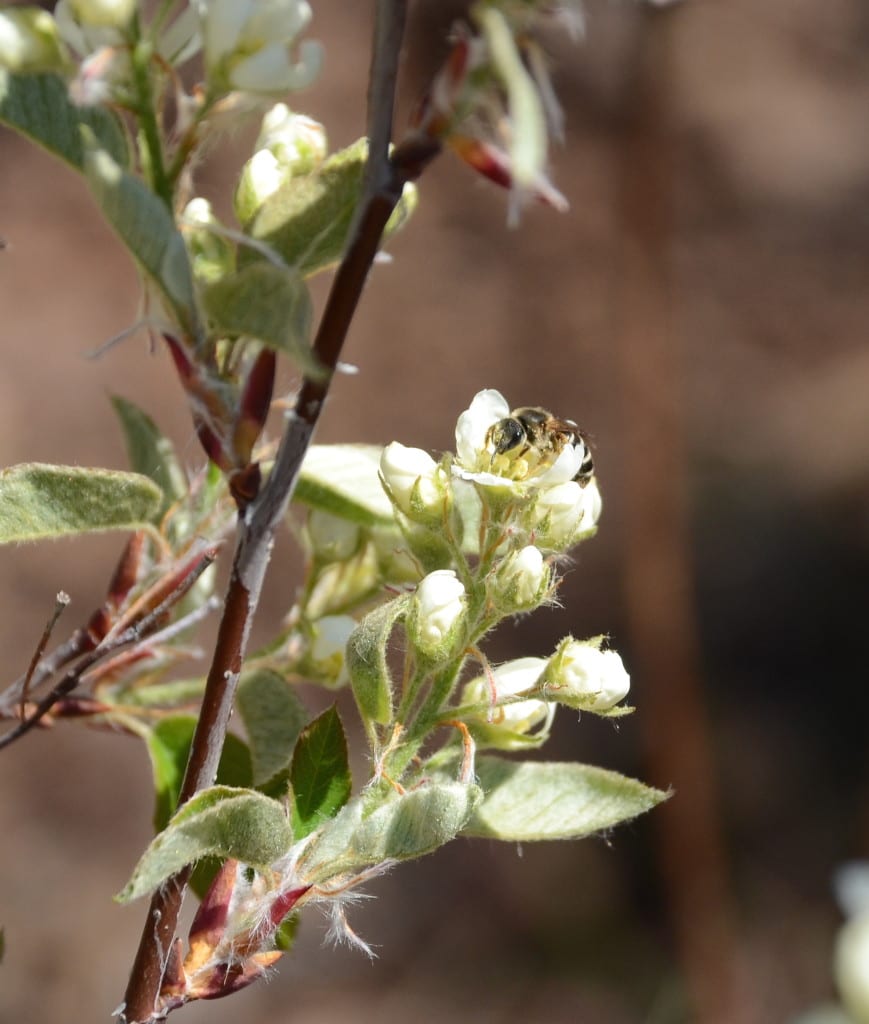 What a fantastic season for landscapes. The weather has been exceptionally cooperative in the Minneapolis St. Paul area. Pollinators have had a busy year from early April until the beginning of November. There has been an upswing in client interest for more ecologically sound landscape design/installation practice with thoughts going beyond a couple of years and thinking for generations. 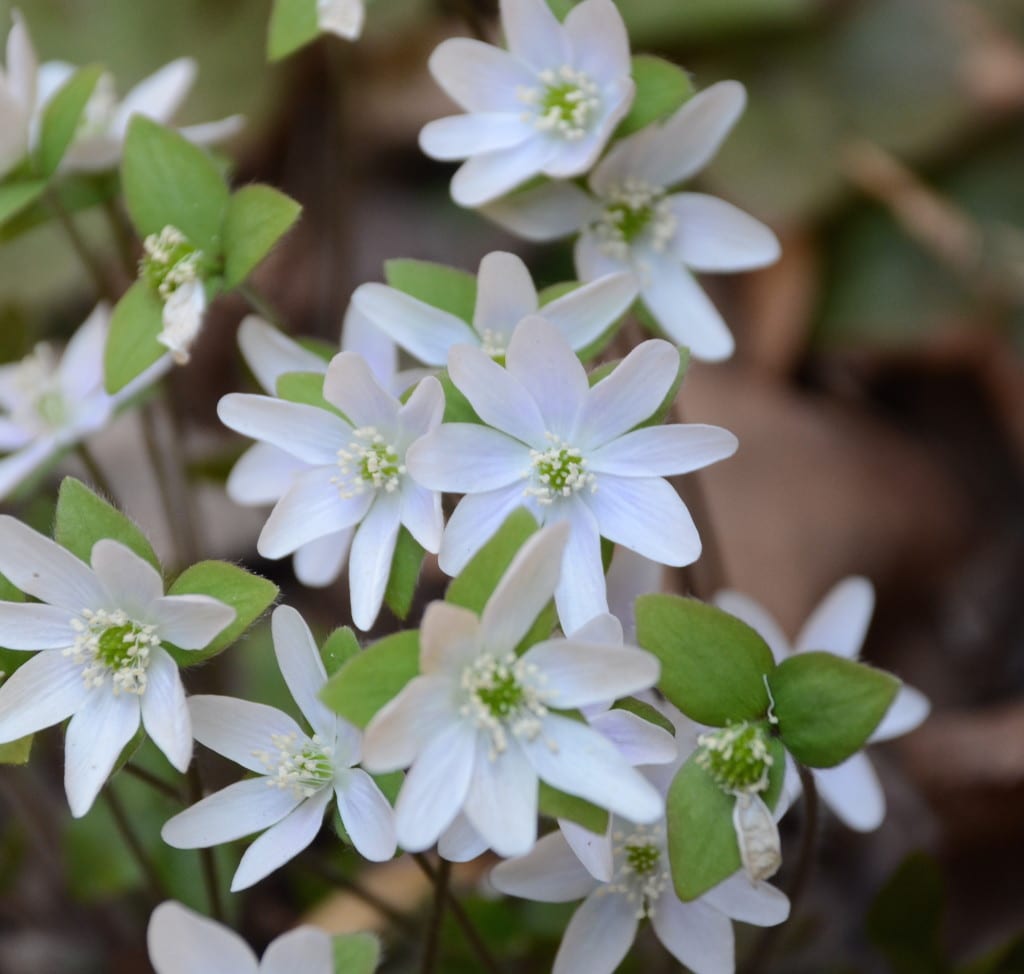 Showers didn’t really occur this season, but the flowers were there for May (Heptatica acutiloba – Hepatica). 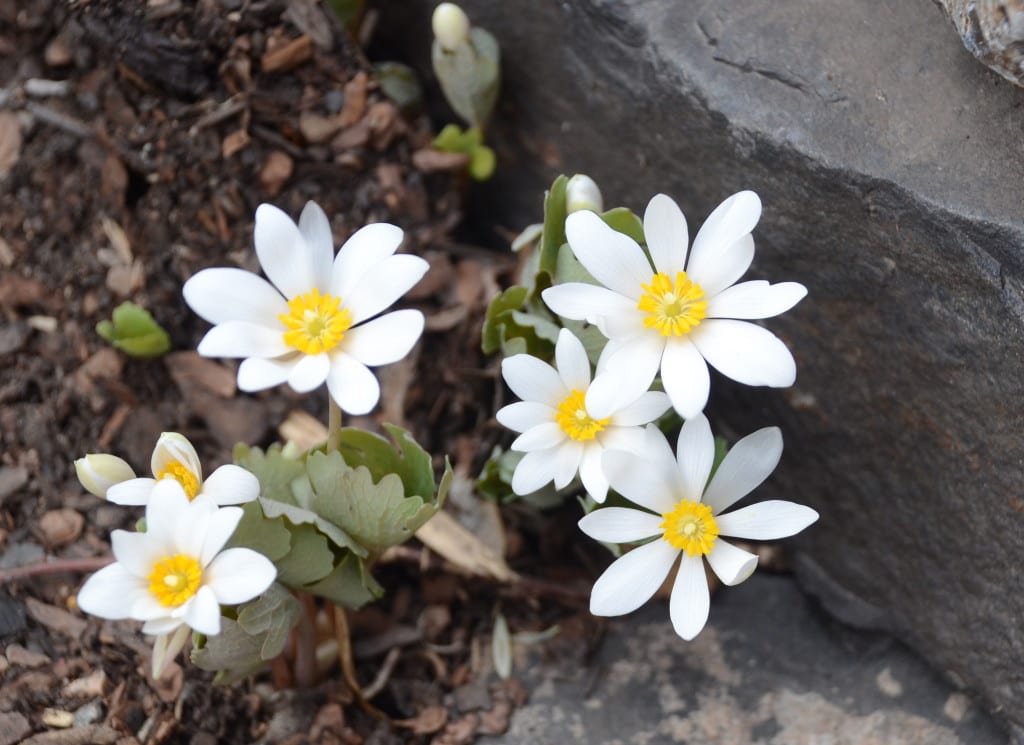 Weather wise, the season started out unpredictable. We were in a slight drought later last summer and through this past winter. Unlike New England, the Twin Cities and the upper Midwest had very little snow. Minneapolis averages 55 inches of snowfall per season; the 2014-2015 snowfall total was less than half that with a total of 27 inches. Fortunately, the spring and summer rainfall assisted in bringing our precipitation totals just slightly above average for total precipitation for the first ten months of 2015. 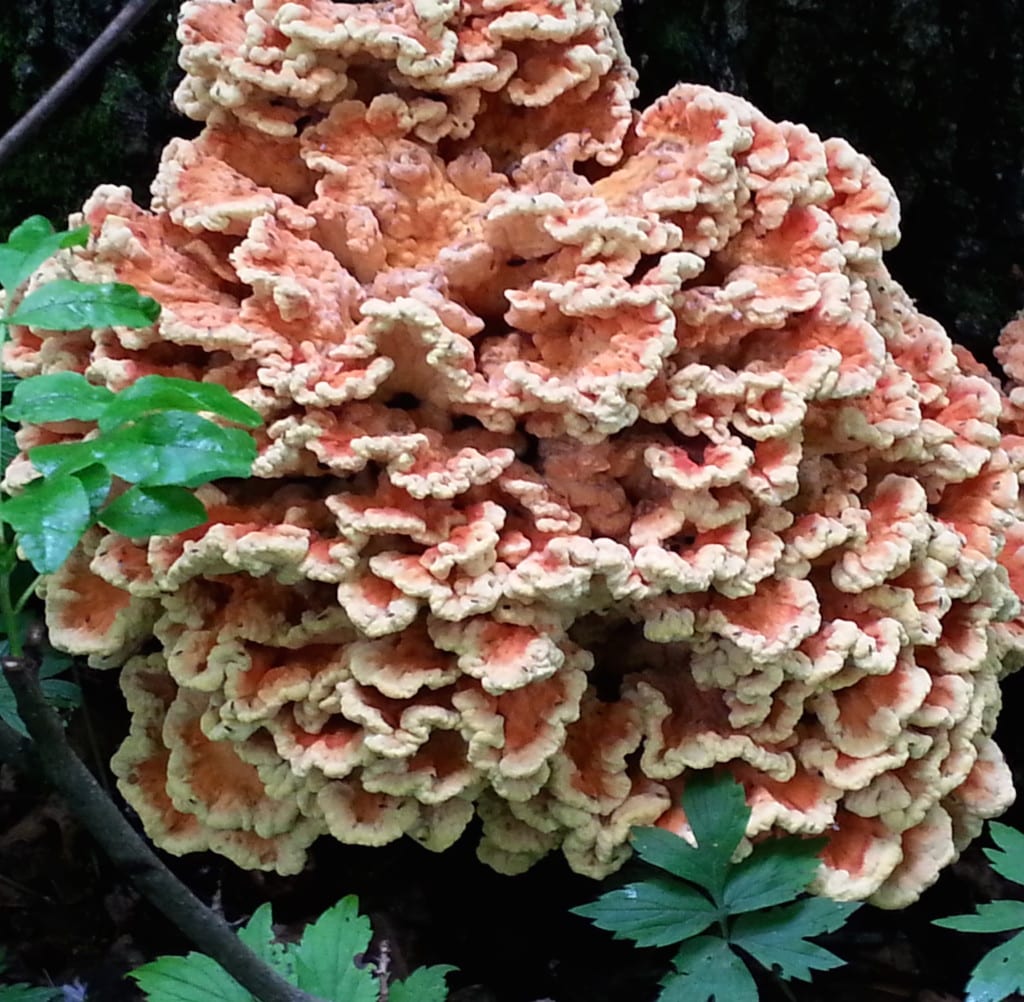 Chicken of the Woods emerged on a fallen red oak in June. 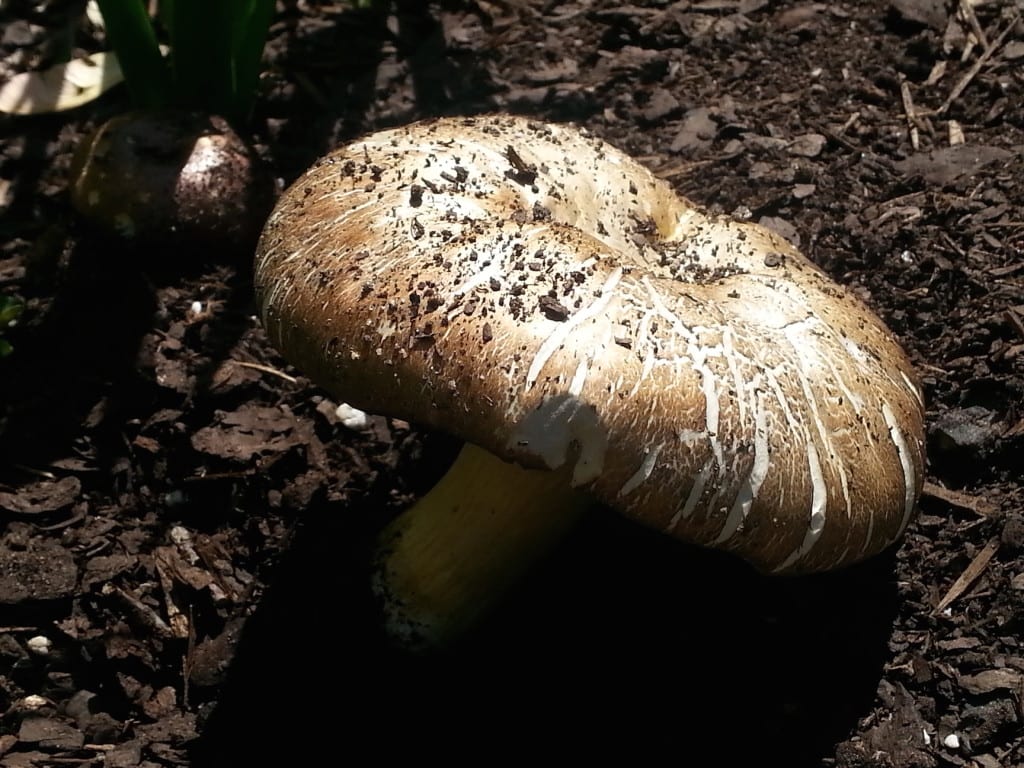 Stropharia rugoso-annulata ‘King Stropharia’ (Wine Cap) mushrooms were in abundance on the Hugel beds in May.

The timely rainfall this season greatly improved new landscape planting success compared to last season. Typically, I do not expect active growth from most natives during the first year of planting; however, this year proved to be a surprise in that regard. For example, Symphoricarpos albus (Snowberry)  was installed on steep slopes in one project for erosion control. Within three weeks S. albus were sending rhizomes out with plant emergence two to three feet from the origin plant. 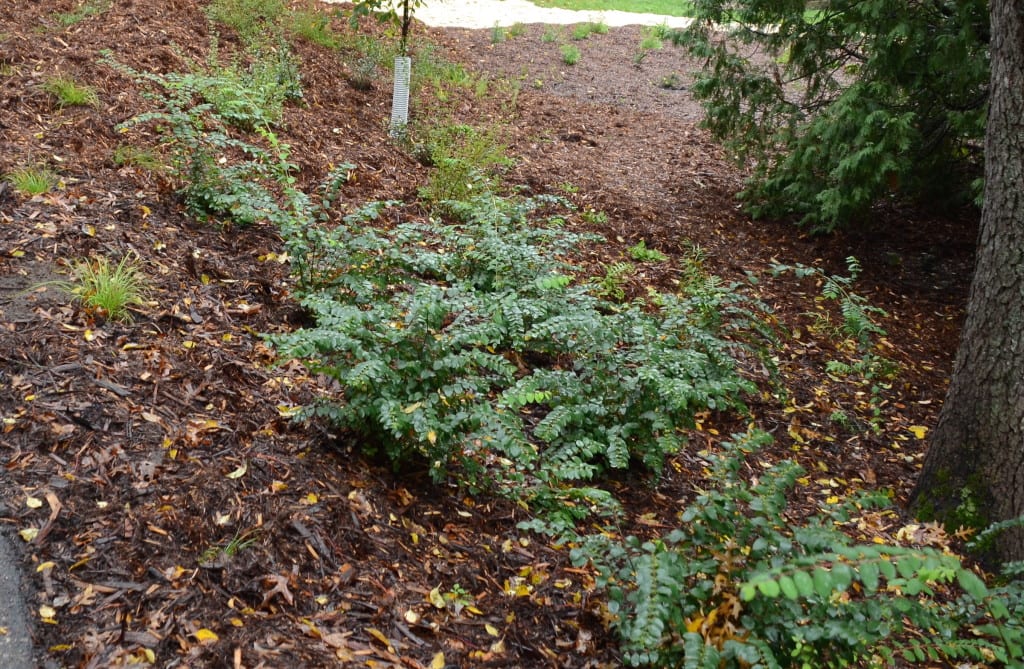 That being said, landscapes with established Symphoricarpos orbiculatus (Coralberry) and S. albus did not fare as well. S. orbiculatus started dropping leaves in July, although they still flowered and the fruit has persisted well into autumn. Perhaps, this effect was remnant drought stress from last summer and this past winter. The drought from last season stressed some trees into earlier than expected color change. For instance, the Acer saccahrum in our neighborhood started turning color in mid August. Fortunately, they held their leaves well into October for extended enjoyment. 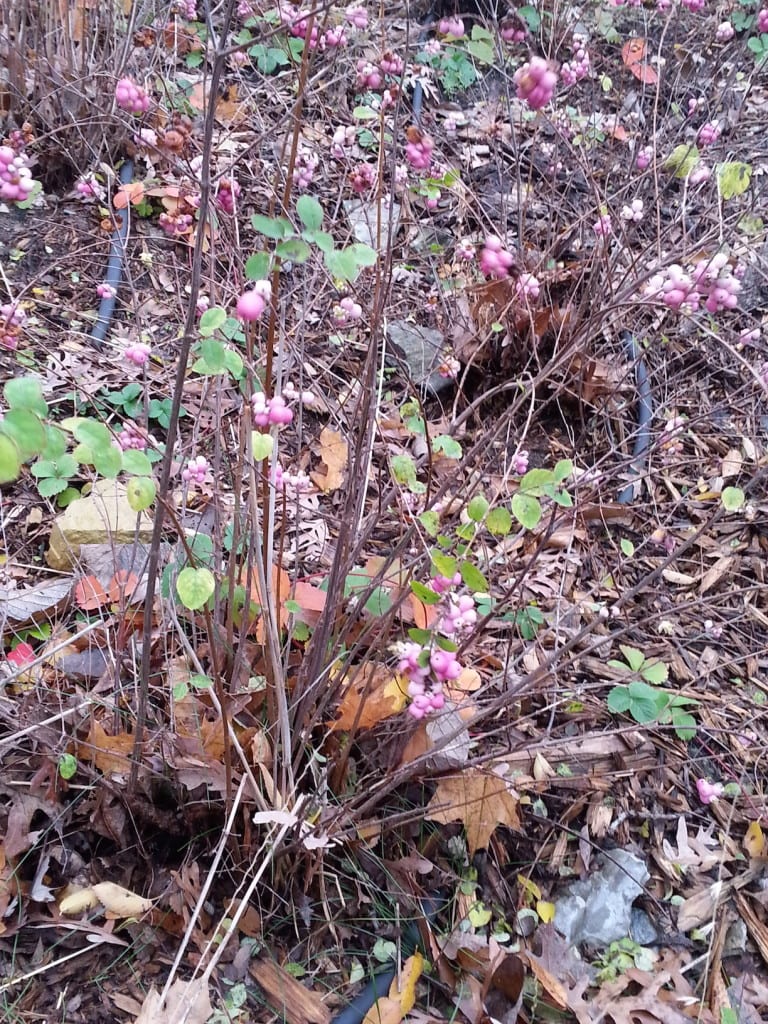 In contrast, Symphoricarpos orbiculatus (Coralberry) in the existing landscape shows signs of stress in September.

The rainfall this season proved to be great for the cool season plantings, but not as great for the warm season plants. The Carex muskingumensis (Palm Sedge) shown below was planted as a plug in July the same time as the Panicum virgatum (Switch Grass) (planted as a #1 container). The P.  virgatum stayed approximately the same size even during flower emergence, whereas the C. mukingumensis greatly increased in size. Both of the plants were planted at the same project location. 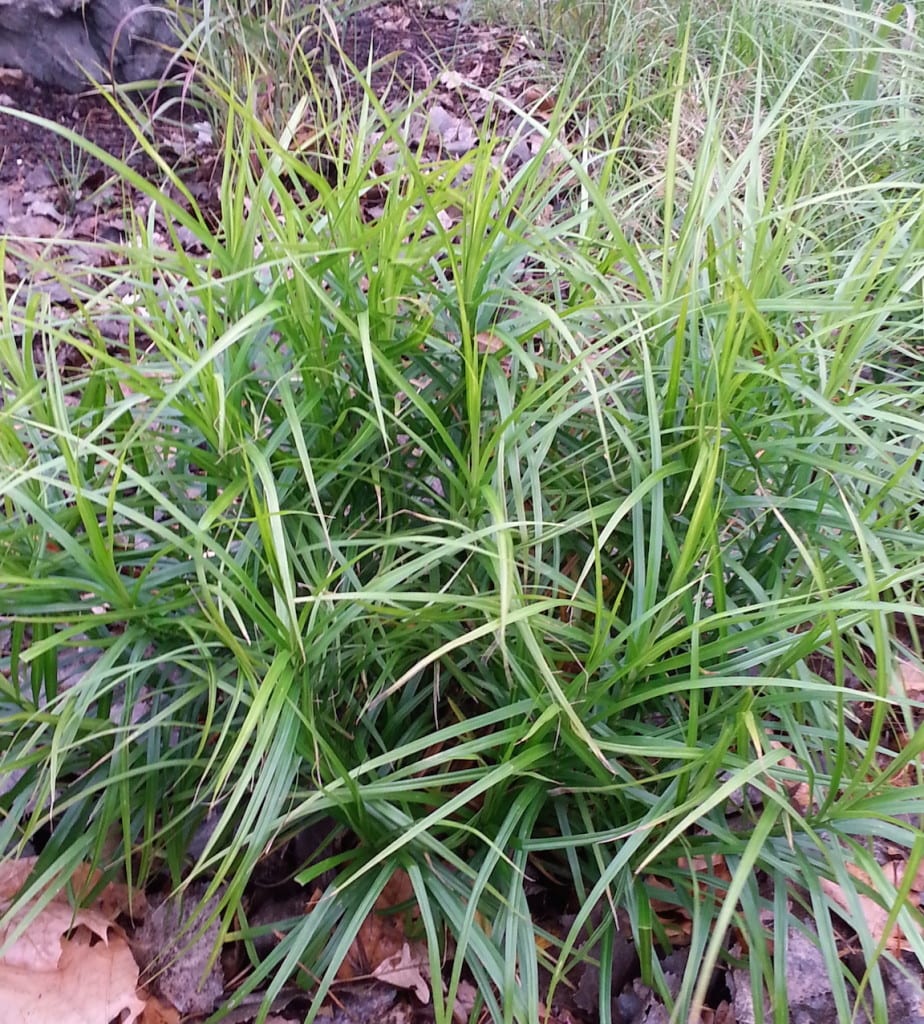 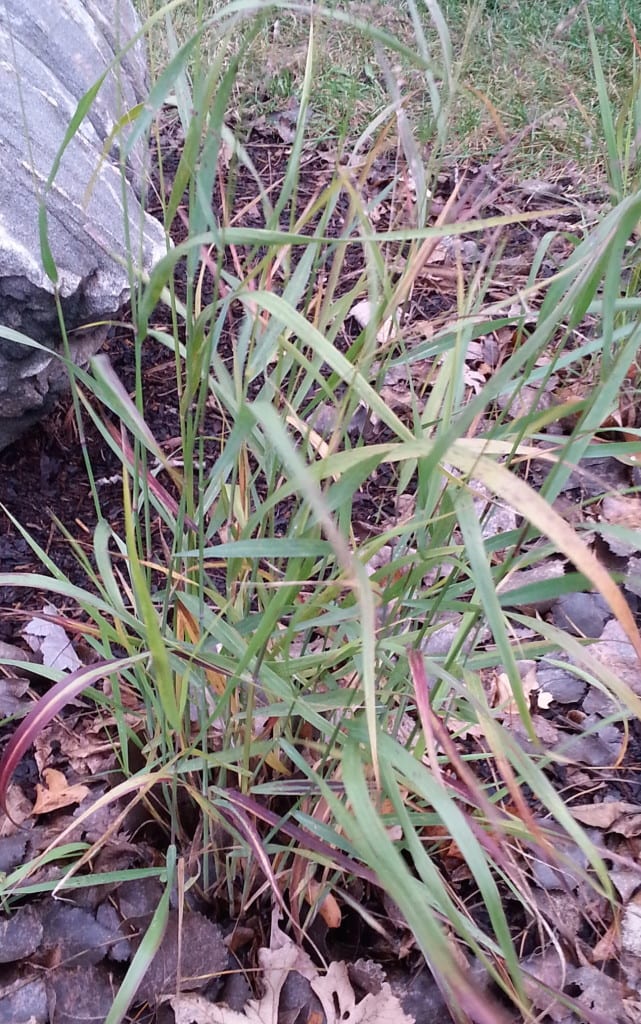 Panicum virgatum(Swtich Grass) two months after planting as a #1 container.

Also, the warm season grasses that were seeded on projects fared better than grasses planted onsite this summer. I experienced 30 to 40 percent loss of plug-size Bouteloua gracilis (Blue Gramma Grass) and Schizachyrium scoparium (Little Bluestem), whereas seeded locations actively acclimated to the conditions and germinated well. Some of the native plant growers I acquire plant material from experienced similar results with new stock establishment. Their two-inch plug plant material declined in viability once it was moved from the starting greenhouses to the growing fields. 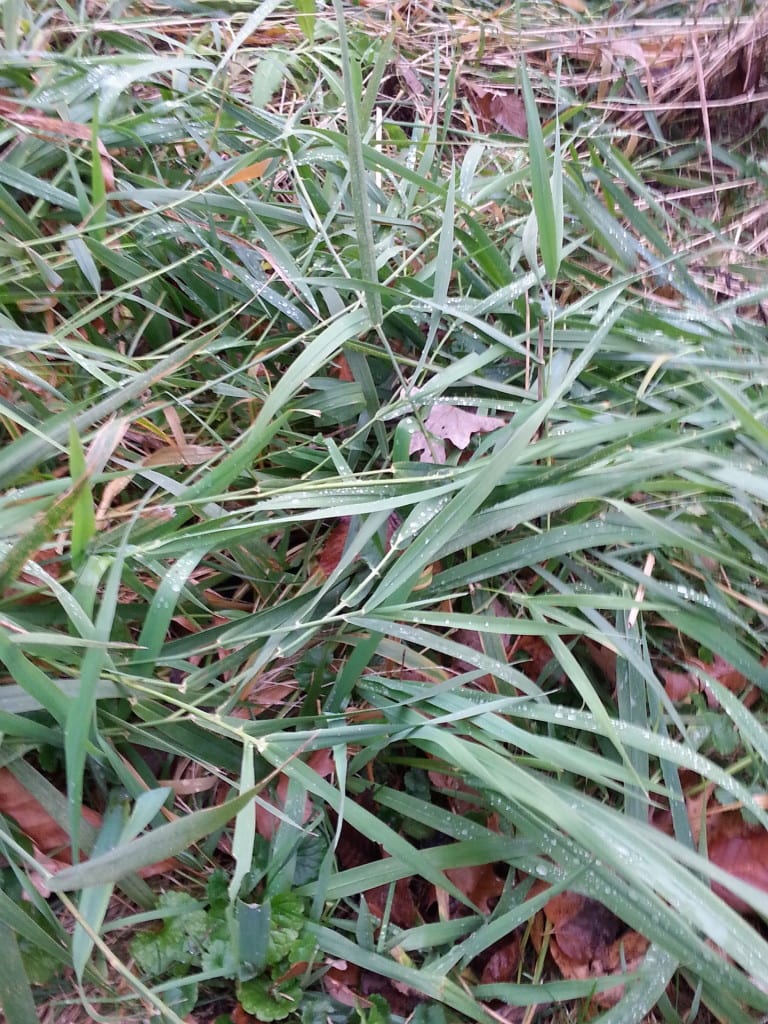 Speaking of cool season plants, the project I discussed in the April 2014 newsletter article Planning for Succession in a Residential Landscape had an ‘outbreak’ of Phalaris arundinacea  (Reed Canary Grass).  P. arundinacea may have already been present on the site, but with the added moisture this summer it spread in the swale areas of the project. The P. arundinacea presence has resulted in an increase in removal maintenance and additional over seeding. 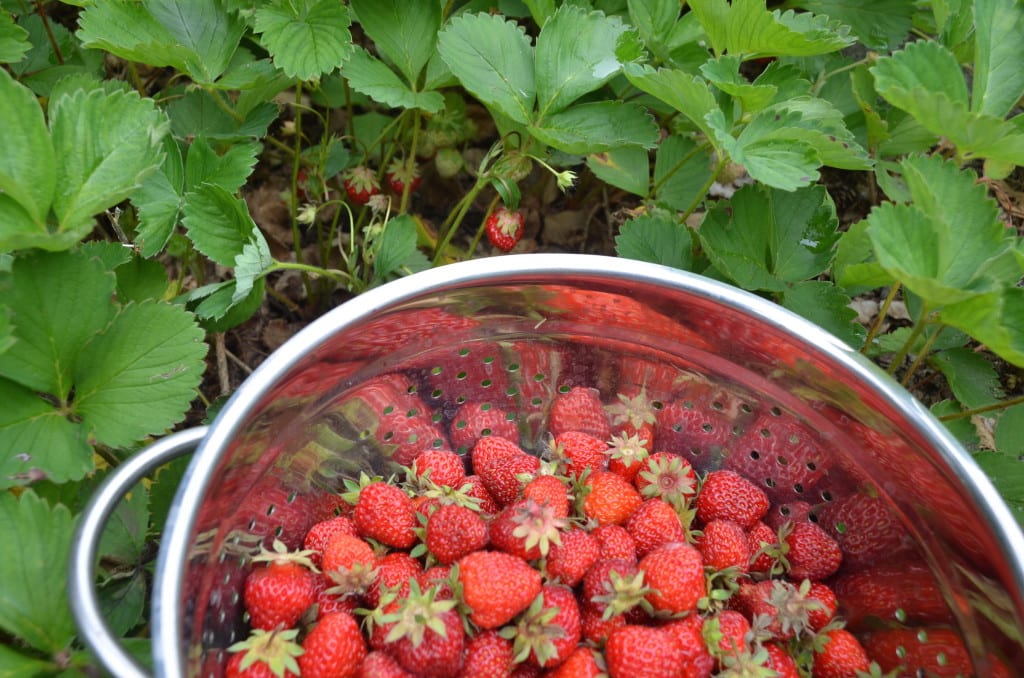 Strawberry harvesting was bountiful in June.

I incorporate fruiting plants in the landscape whenever possible. This season proved to be a bit abnormal with some of the fruit crops, especially the late season plants. Fragaria sp. (Strawberry) and Amelanchier sp. (Serviceberry) flowered and fruited as expected. The spring temperatures and rains provided for an exceptional harvest of strawberry, serviceberry, gooseberry, currant, and blueberry early this summer. 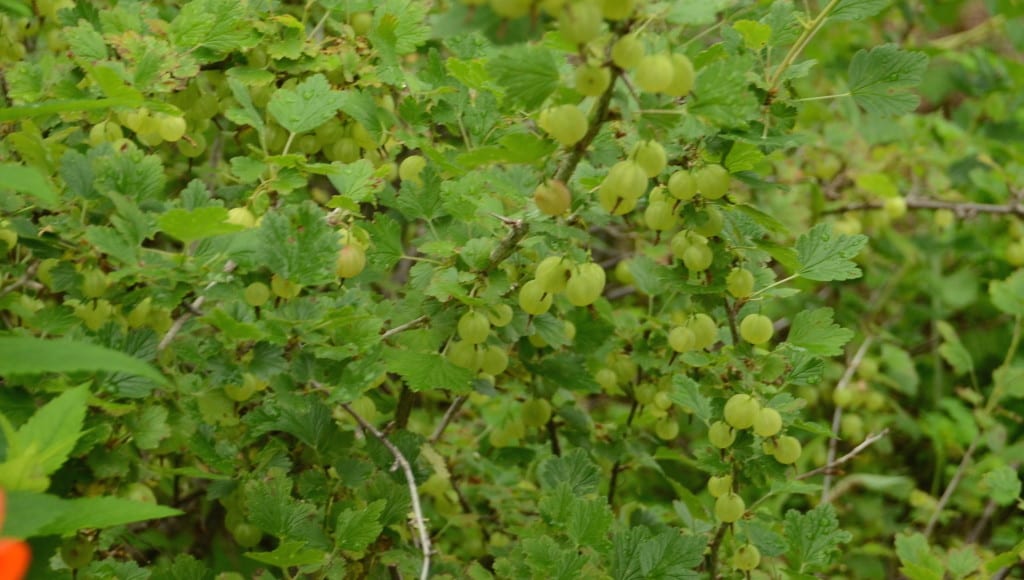 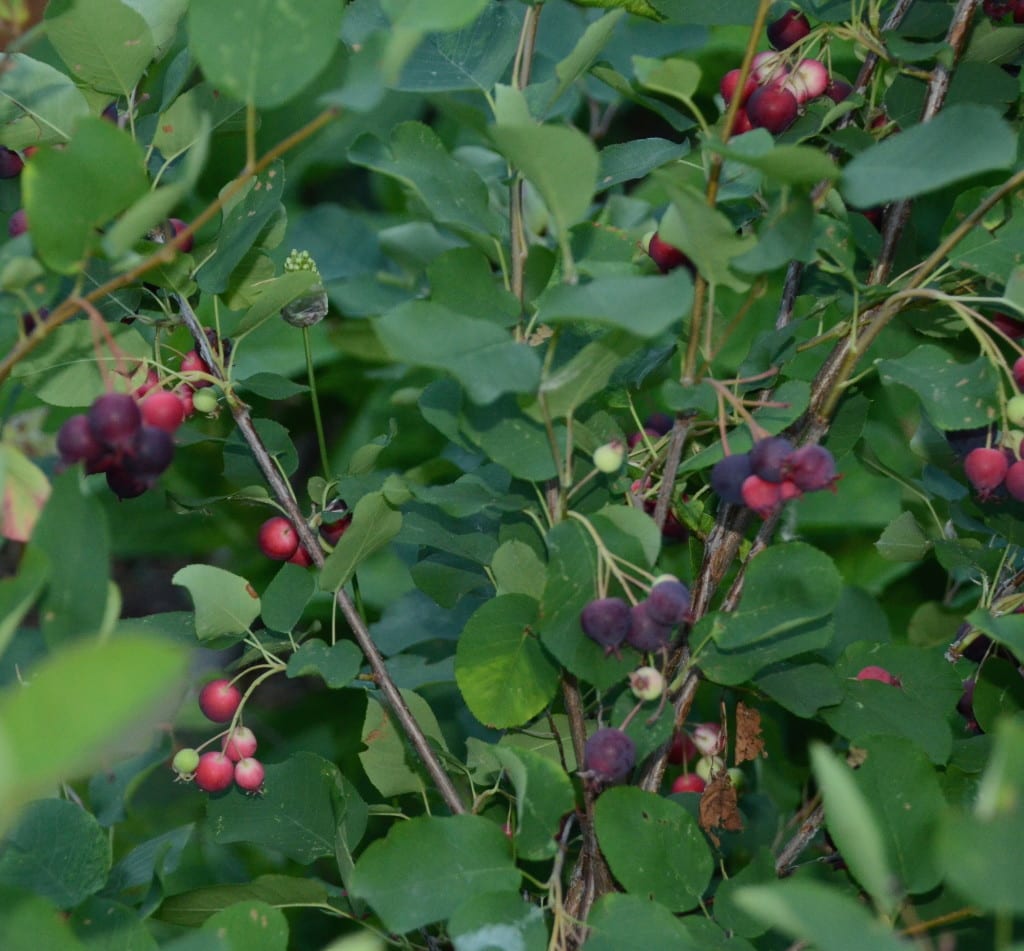 Amelanchier alnifolia (Alder-leaved Serviceberry) shown prior to picking the last week of June produced far more berries this season compared to A. grandiflora (Apple Serviceberry) and A. laevis (Allegheny Serviceberry).

Typically, we do not harvest any apples until September or later, but the Empire apples were ready for harvest at the end of August and the first week of September. The Reliance peaches also fruited early this season; we do not usually harvest peaches until later September, but they were ripe in mid-August. 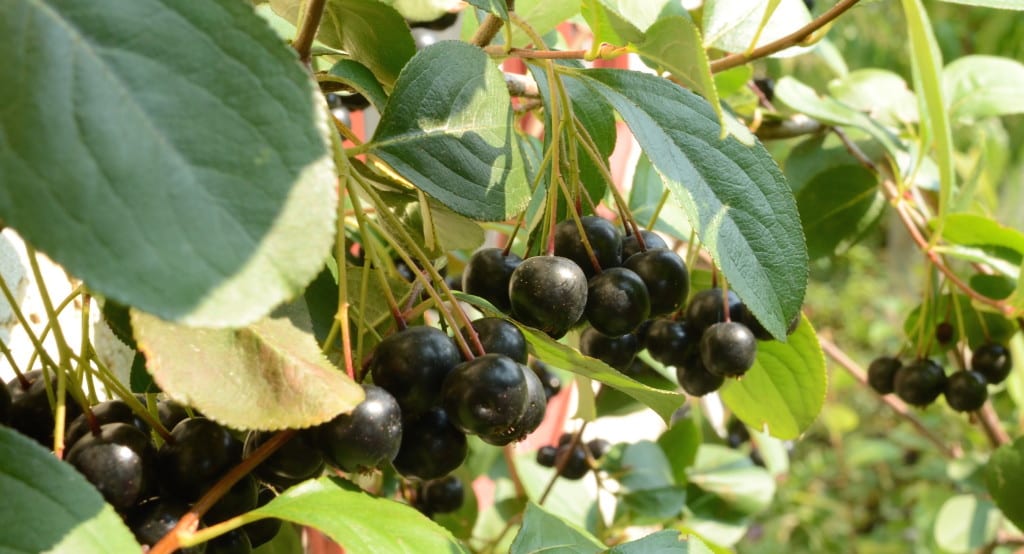 Aronia (Chokeberry) berries were ready for picking in late August.

Aronia melanocarpa (Black Chokeberry) was ready for harvest the first week of September as well. In addition to questions about the early fruiting, I also had an increase in other fruit tree related calls from stressed clients this season. The most common concern was, “‘Something is wrong with our apple trees and the chokeberries. They are on the ground!” The common culprit was that the fruit was not thinned out, so the trees were overloaded. 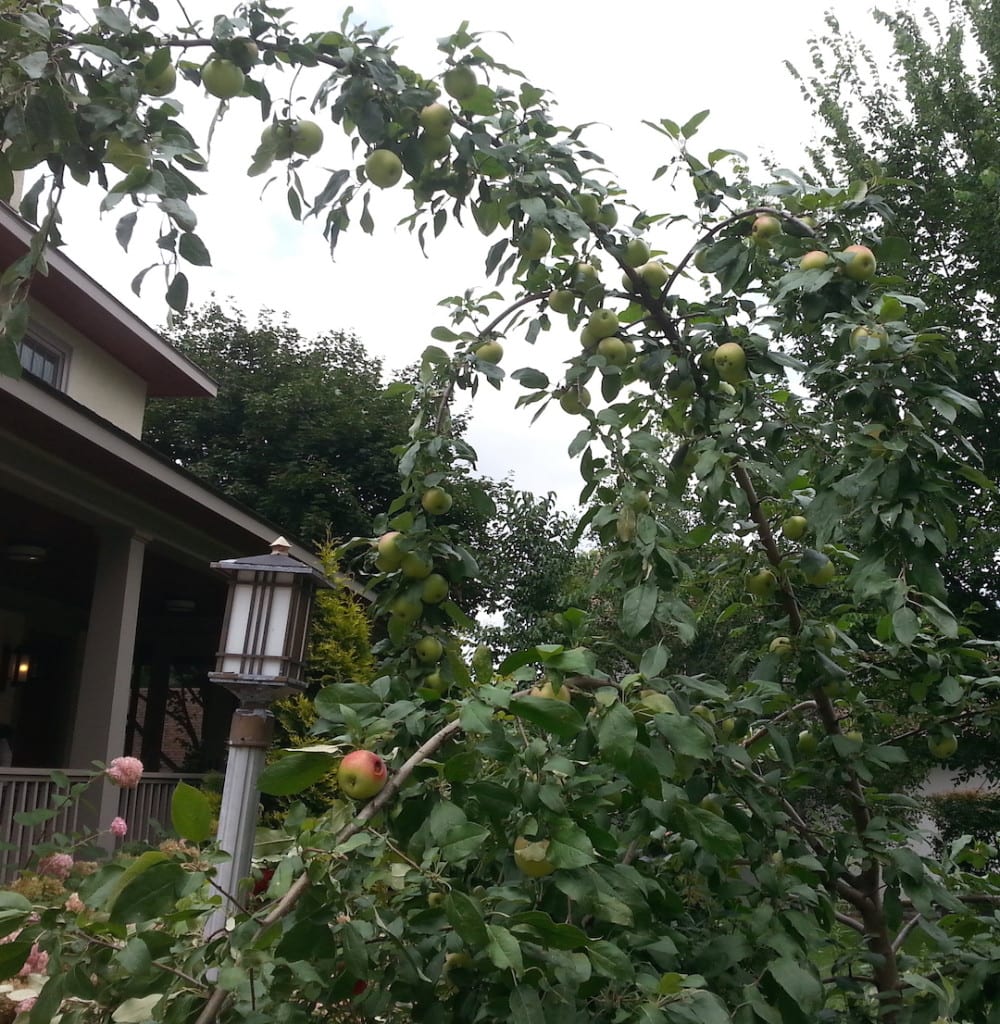 Branches of a client’s Honeycrisp apple touched the ground before the fruit was thinned.

Overall, the temperatures have seemed relatively mild this year, and felt similar to the 2014 season. However, there has been approximately a 12% increase in Growing Degree Day totals when comparing this season to the last season. The increase may explain some of the fruiting plants ripening earlier this season compared to the last few years. 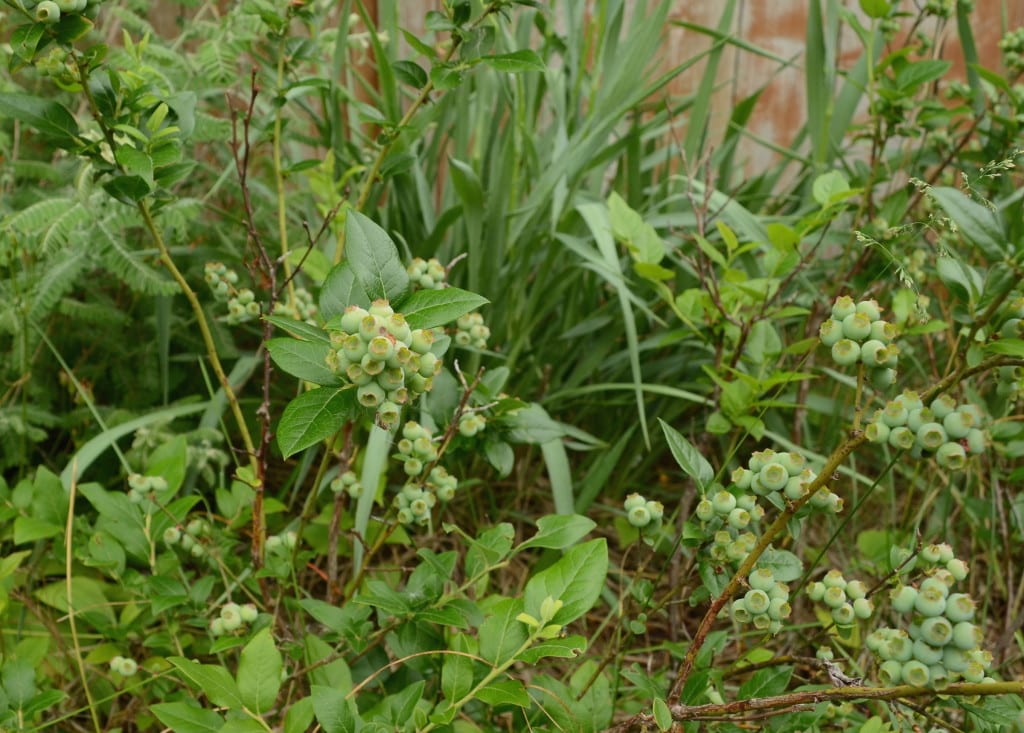 Blueberry bushes show lots of fruit in May, about a month before ripening.

I had more requests for water retention for onsite water use and storage along with habitat improvement projects during the 2015 season versus previous years. I also noticed an increase in client’s desire to become more involved with their landscapes for foraging, and I received specific requests for permaculture designs. Overall, I saw a noticeable increase in clients’ desires to actively participate in their landscapes rather than have something just there to look at.

Daniel Peterson is the sole proprietor of Habadapt Landscape Design in Minneapolis, MN since 2005. He earned his baccalaureate and master degrees from the University of Minnesota, where his graduate work focused on natural community restoration, invasive species management, and GIS mapping of the Minneapolis park systems’ natural communities. Dan may be reached at dan@habadapt.com.