By Maureen Sundberg on November 15, 2015 in Landscape Design

2015 has been a year of terrible drought in many parts of the country. Even Massachusetts suffered from extreme heat and long periods without rain late in summer. Gardening for water conservation is becoming crucial to creating successful gardens.

Perhaps it was the news from California, South Africa, or Sao Paulo, but water conservation was on the minds of many of our clients this year. In early April it began with a conversation with one client about reducing the need for irrigation and continued with an investigation of the client’s property.

A first look at the front yard revealed well-established, drought-tolerant and drought-resistant plants: Siberian cypress (M. decussata), switchgrasses (Panicum spp.), and autumn stonecrop (H. spectabile) to name a few. The soil was a rich loam conditioned by several annual applications of leaf mulch. The work had already been done. The solution to water conservation was to switch off the irrigation zone. It remained off for the entire summer.

Thus, the theme of the season was established. The following week began a new challenge with a new garden to replace a barren lawn behind a short retaining wall with a threatening appearance. The only other features included a concrete walk and some ragged shrubs of Japanese Andromeda, azalea, and yew. 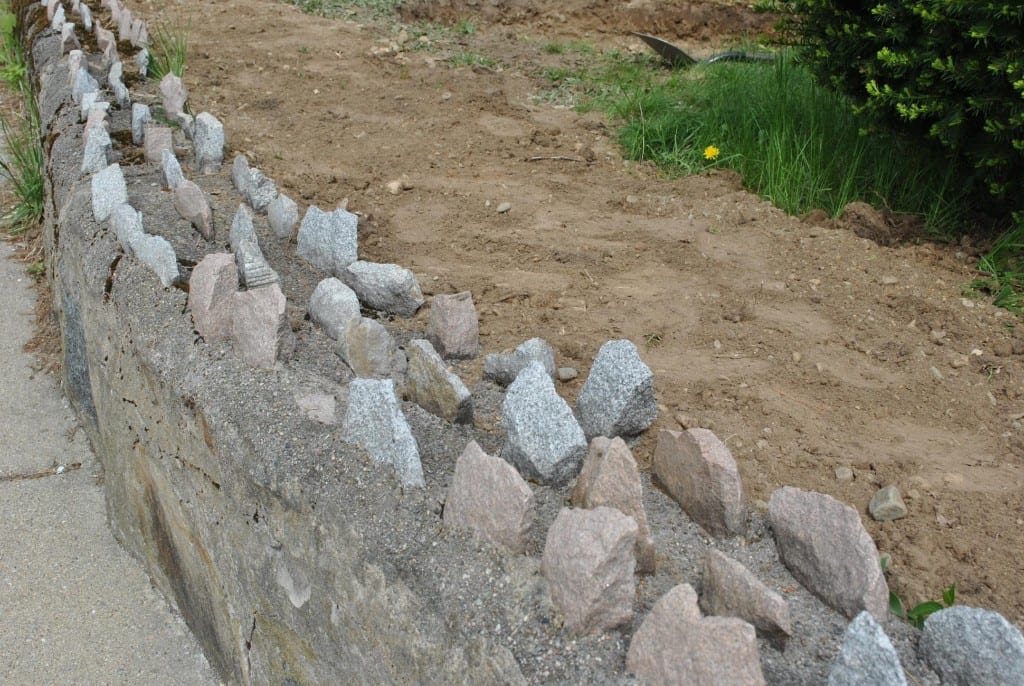 “I like grasses. Big grasses with tops like feathers…With lots of stone. Like the Mediterranean,” said the client. Her vision was whimsical and open, leaving room for imagination. A picture was starting to form.

“Not too many flowers, but I like lavender. Lots of lavender!”

The house is on a corner lot in Boston’s trendy Jamaica Plain neighborhood. The streets are lined with quaint, but quintessential cottages and other modestly-sized, well-kept homes.

The garden would replace the lawn on the north side of the squat house, which has open east and west exposures. Most of the plot receives sun from the early morning to the late afternoon from April to August, with shady refuges tucked into nooks between shrubs and hugging the walls of the house. The rough-made wall, exposed to the sun all day, would steam moisture from the ground around it. Even with 44 inches of annual rainfall, this is a hot, dry space. Here the Mediterranean look is easily imagined.

We had agreed on the concept and basic design elements. Out of a loose aesthetic vision grew a solid concept: grow a xeriscape – a landscape that requires no supplemental irrigation. Embellishments to the design included a small, irregular, sunken Medomak Valley flagstone patio, three tiers of garden beds retained with local field stone and a low mound to add relief along the walk. In addition, we added an evergreen privacy screen next to the patio.

Xeriscape in the Northeast means something different than in arid regions. Summer rains can be infrequent during the hottest months, but they do come. Creating a drought-resistant garden in this region involves the same steps, but plants that are classified as “drought-tolerant once established” can be used if temporary irrigation is provided. In this case, we set up a drip irrigation system using drip line spaced 18″ with 0.6 GPH drip line. The line was attached to a hose-end timer. The plan is to remove and reuse the drip line on similar projects in the future after two summers of establishment.

We broke ground April 22, 2015. After excavating for the patio, we laid it on 10″ of crusher run and dry-set it in stone dust. We used the soil to backfill the terraces and create the mound. At roughly nine feet at its widest point, the irregularly-shaped patio surface is just large enough to hold four chairs and a small table. 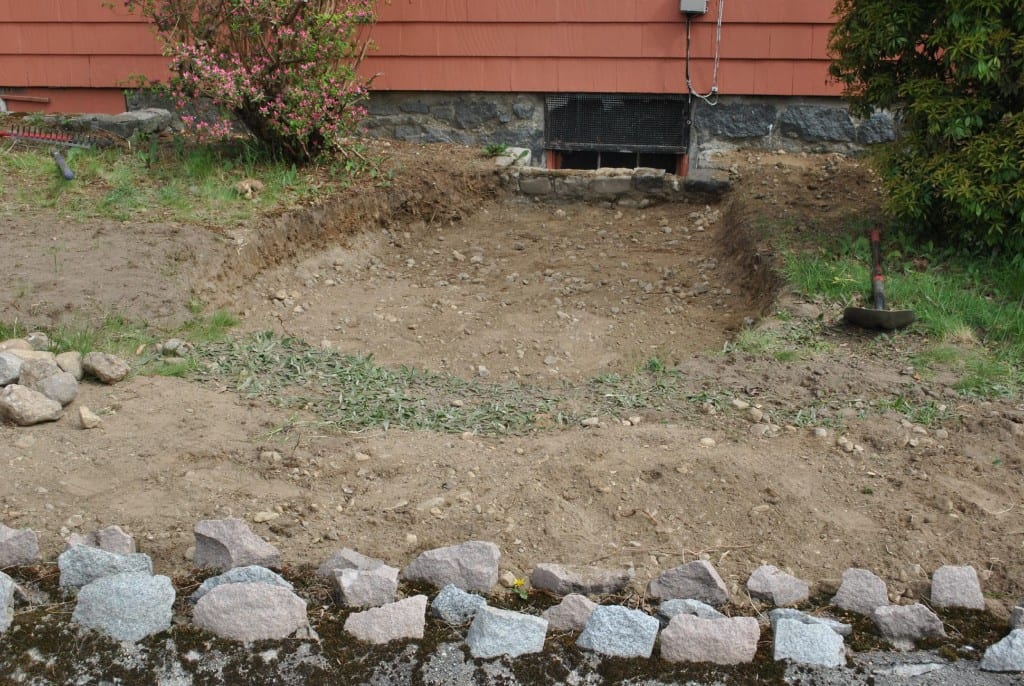 Site work for the project began with excavation for a patio.

Drought-proofing the soils came next. We sheet mulched the surface using water-soaked cardboard for the temporary weed barrier and finished with 2-3 inches of leaf mulch. Compost was imported and mixed  into existing soils to improve moisture retention. 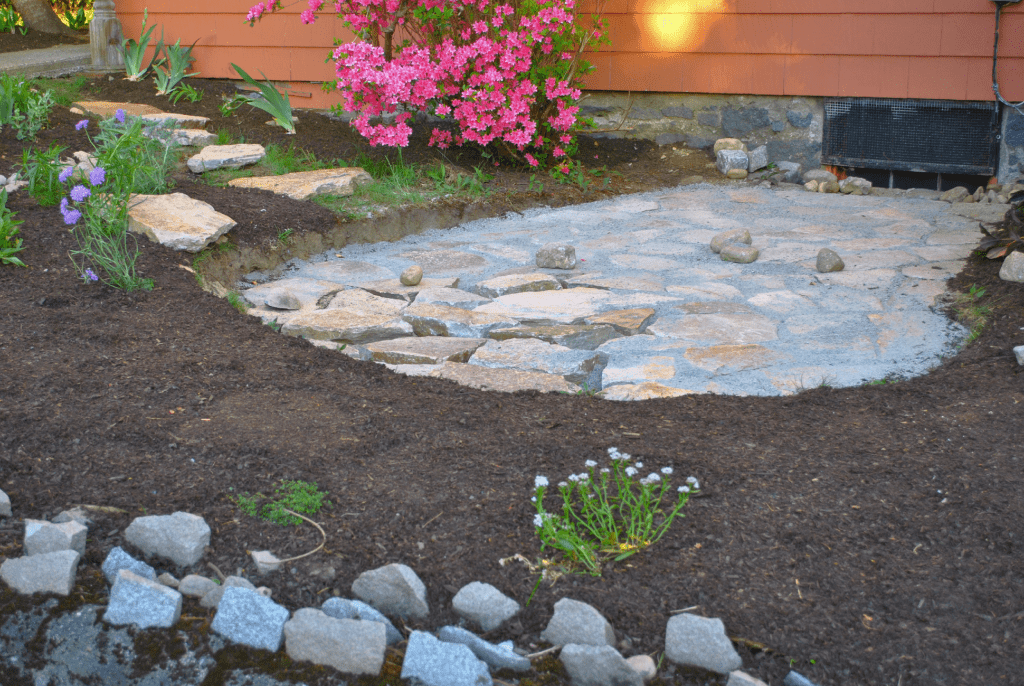 Once the patio stones were in place, we mulched the surrounding beds with water-soaked cardboard and leaf mulch.

The first round of planting incorporated grasses and mixed wildflowers that were available in the early spring. Even by May 8th when we began to plant, the nurseries were still delayed in rolling out product because the winter’s tremendous snow pack was slow to melt. 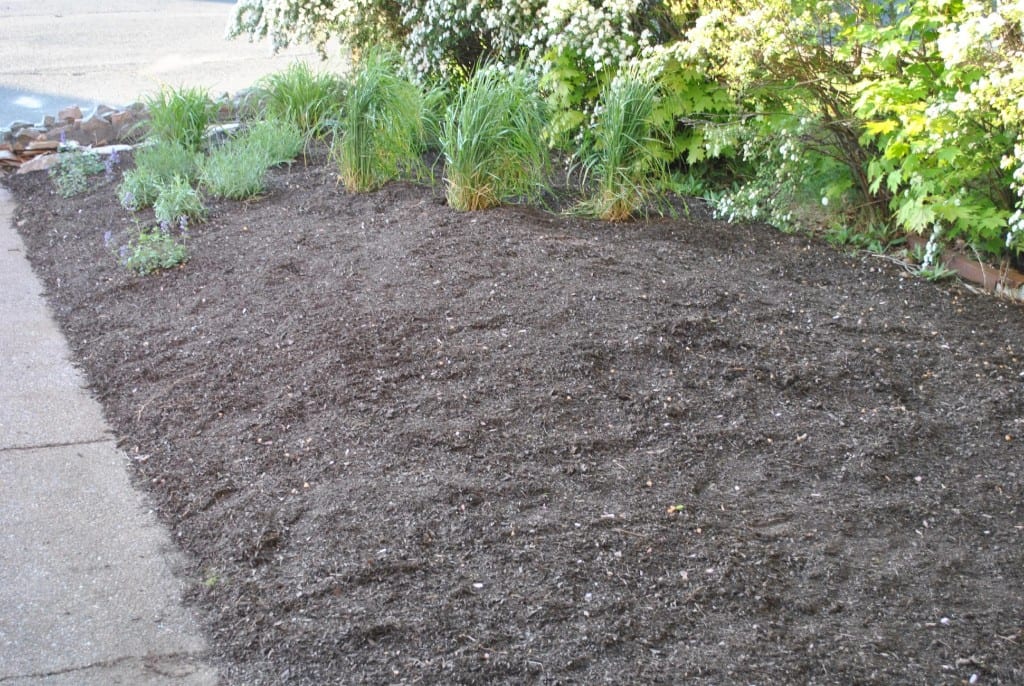 Planting begins along the built mound next to the walk in a view toward the street.

On May 29th the final round of planting was completed and the drip lines were laid around the plants in custom configuration to maximize the efficiency of irrigation coverage. The lines are pinned at the surface of the ground with 6″ staples, just under the mulch. 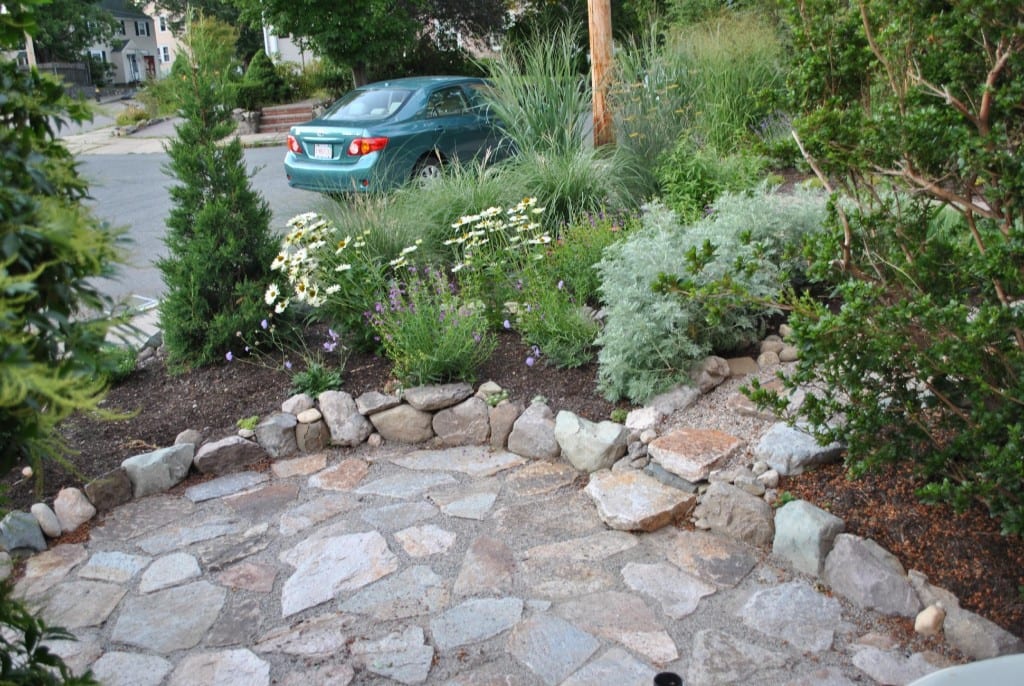 The simple system was programmed to run for four hours once per week. It lacked a rain sensor, but we could stop by to suspend the timer with a rain delay setting, which lasts for up to three days. It proved to be a reliable system, even after the client unexpectedly departed and put the house on the market. 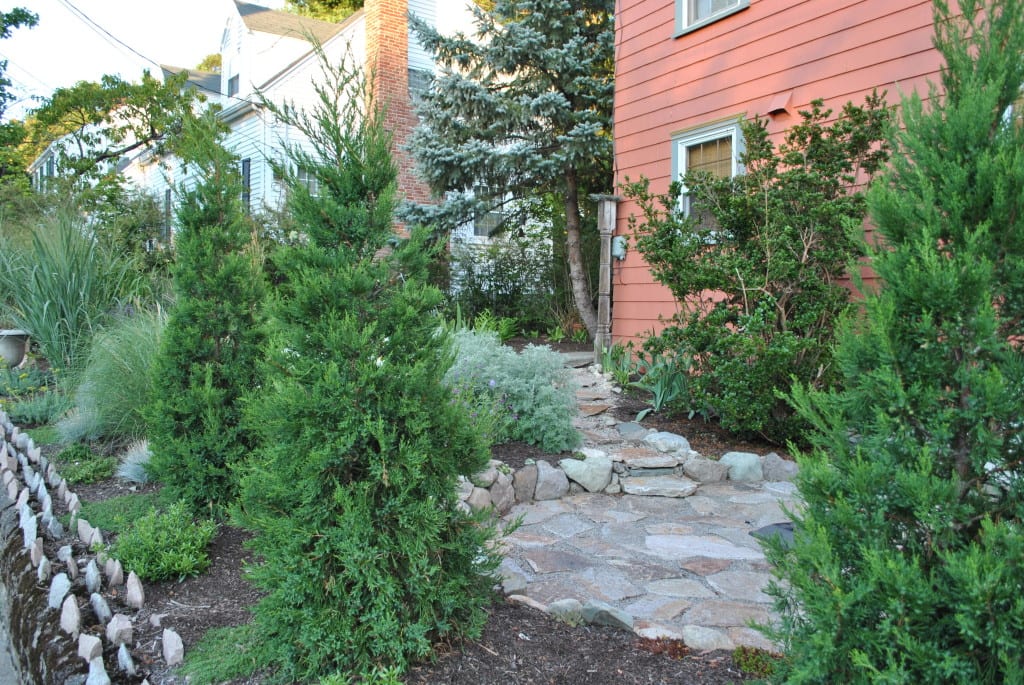 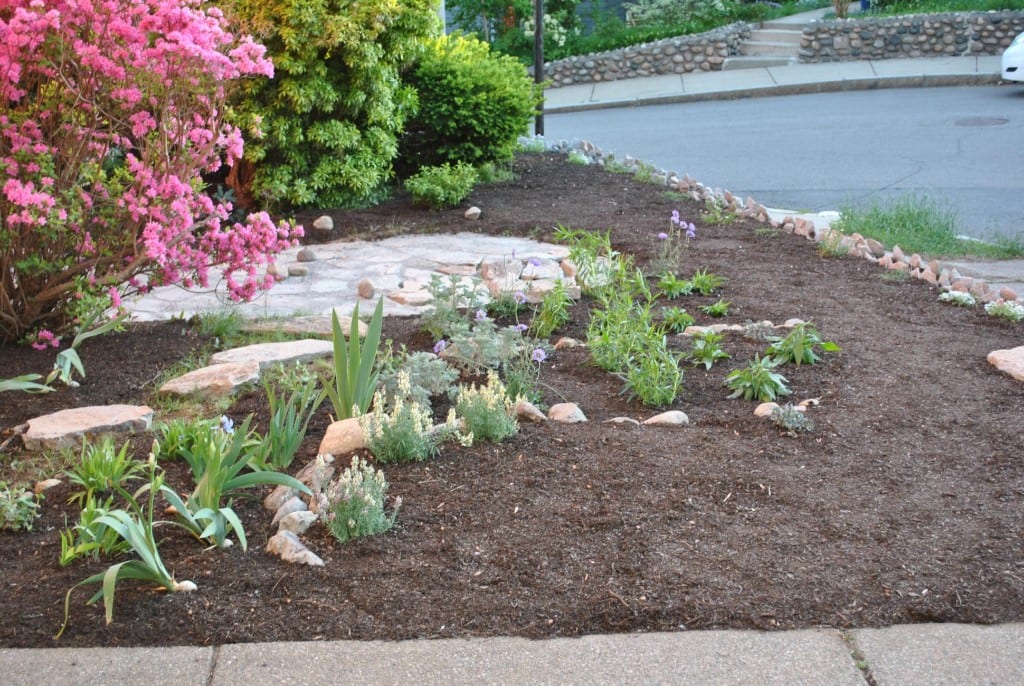 Planting begins along the terraces.

The plants grew far faster than expected, filling most of the space by August. The system proved that it was not foolproof, though, providing an unexpectedly early test of the design. The water was shut off for at least two weeks toward late August and into September, coinciding with the hottest and driest period of the summer. Most plants continued to thrive despite the deprivation of moisture. A few, like the feather reed grass, catmint, and the ever-baring alpine strawberry showed signs of stress and drying, though they bounced back after the supplemental irrigation was resumed. The strawberries even produced a small third crop by the first week of October. 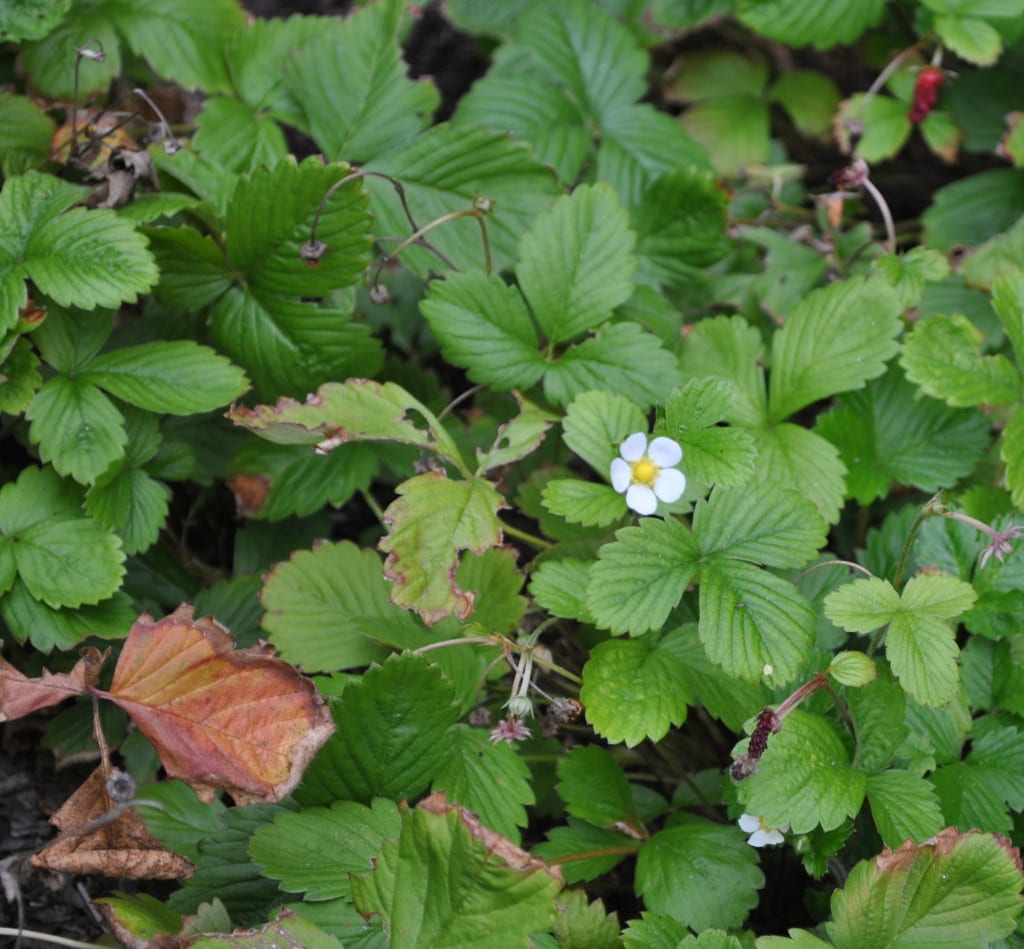 The client expected that some plants would show signs of drought stress under certain conditions. In some cases, it does not damage the aesthetic. The drying of the feather reed grass did not impact their beauty. Tolerance for heat-induced dormancy may be required in certain xeriscape designs unless you wish to place further restriction on your plant list and the multiple functions they can provide. On the other hand, designing multiple seasonality into the garden helps to provide cover and interest when certain plants are affected by high summer heat. In the interest of sustainability, I would advocate for flexibility in aesthetics. To this end, it helps to educate clients about plants and their natural adaptations to tolerate stress. 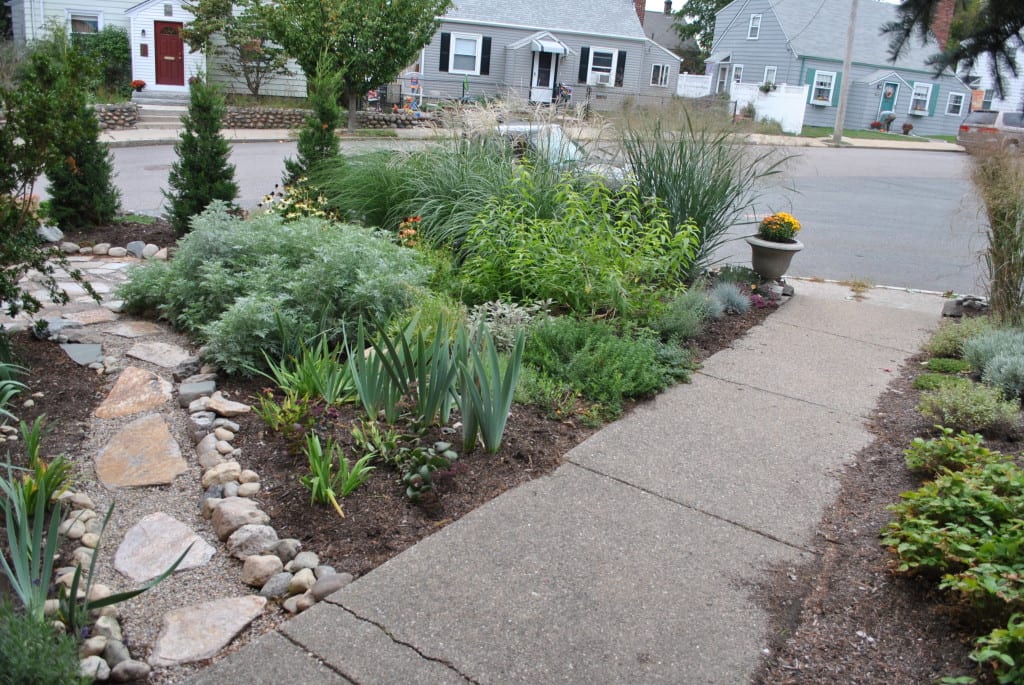 A view toward the street in September. Various irises and herbs including oregano, tricolor sage, thyme, winter savory, lemon verbena, and fennel line the left side of the path. Alpine strawberry, catmint, lavender, and creeping white sedum line the right.

The plantings transformed the character of the site dramatically. Plantings along the rock wall took their cue from the midday shade cast by taller grasses and flowering perennials behind them. Reaching for more light, they began spreading over the jagged top of the north-facing wall, softening its look. 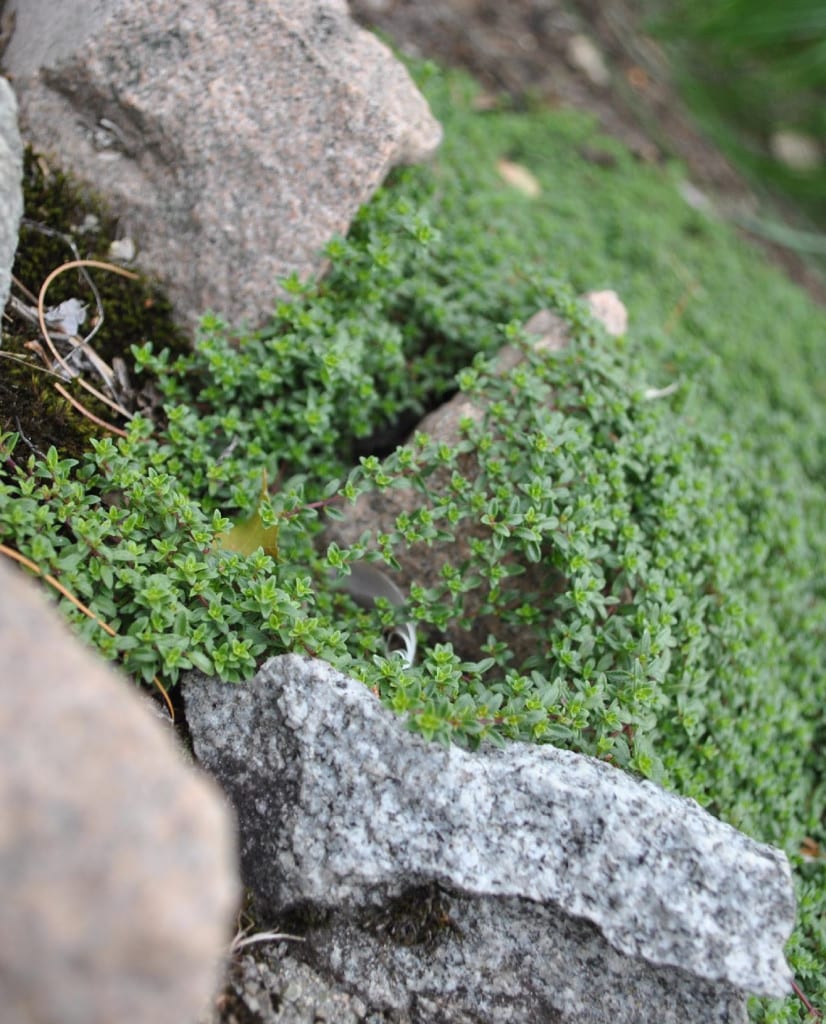 Creeping thyme grew out enough by September to soften the look of the rock wall.

The most heat and drought tolerant plants were placed closest to the wall. Grasses like (M. sinensis ‘Gracilimus’) and rock garden plants like white sedum (S. album) soaked up the heat, grew, and flowered beautifully. The interior beds consisted of a mixed meadow flowers which filled out to shade and protect the soil. A cascade of late spring and summer blooms started with irises and continued with toad flax (L. vulgaris), beardtongue (P. digitalis), coneflower (Echinacea spp.) and pincushion flower (Scabiosa spp.) into the fall. The meadow mix was flanked with aromatic and culinary herbs including a row of wormwood (A. absinthium) and a full array of perennial culinary herbs. The edible components lay close to the entrance, which leads to the kitchen. 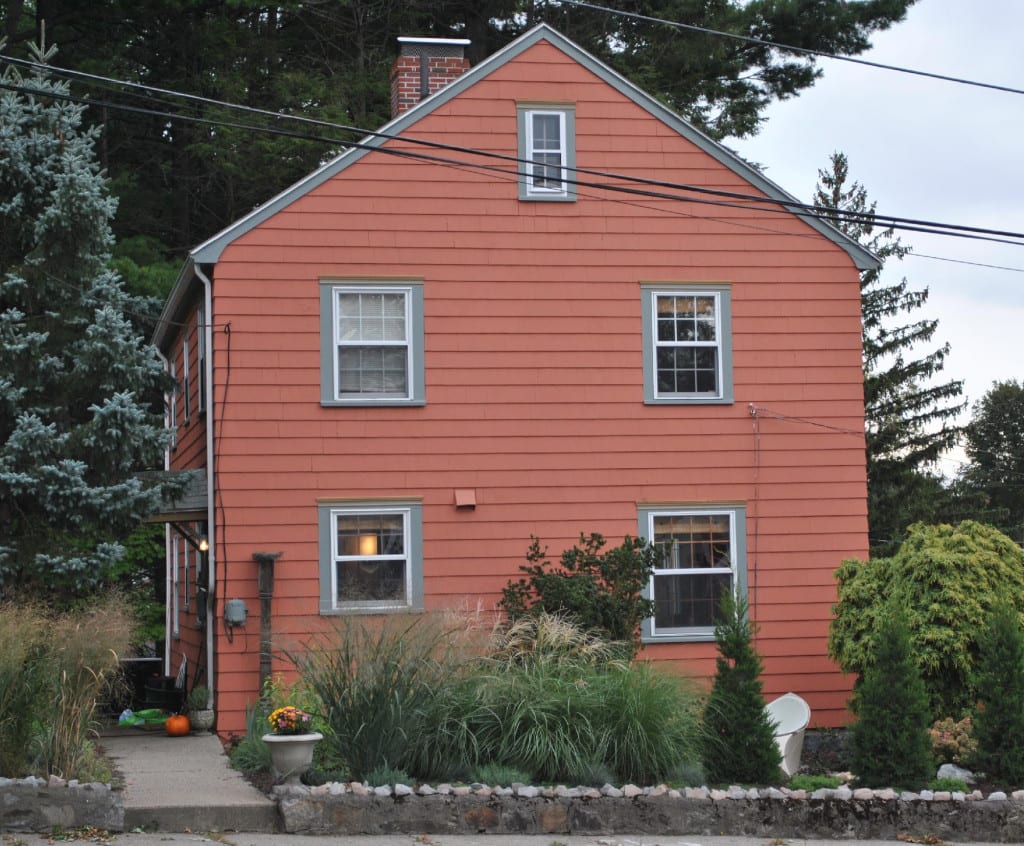 The view of the garden from across the street in September.

As of this writing on November 11, 2015 the house is under agreement and about to be sold. I would guess that if the owner had an intention to sell before this project began that it never would have happened. I have spoken with the real estate agent, who has my business cards. I hope that part of the spark that sealed the deal was born from an interest in and appreciation for the garden. Good gardens are a creation of pre-conditioning, but great gardens develop over years. We hope this one found a good steward in its new owner.

Benjamin Crouch is the proprietor of Land of Plenty, which specializes in edible and naturalistic landscapes for the Greater Boston area. He was previously Urban Orchards Director for the Boston-based non-profit EarthWorks.