The Invasive Plant Atlas of New England (IPANE) is a collaborative project which documents invasive alien species (IAS) in New England. Designed to provide comprehensive and up-to-date information about invasive plants in New England, the IPANE project was initiated in 2001 in an effort to coordinate the separate efforts of the six New England states. IPANE’s two main goals are: (1) education and research leading to a better understanding of the dynamics of plant invasion in New England and (2) early detection of new invasions which may lead to rapid response. 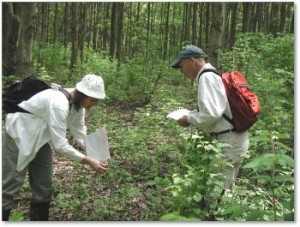 IPANE was one of the first atlas projects of its kind in the region and has since become a model program for other states and regions. It was designed after similar, successful atlas projects such as the Breeding Bird Atlas and the National Audubon Society’s Christmas Bird Count. The actual data collection methods were designed after the Protea Atlas project of South Africa which targets documentation of rare plants in that region. Since its inception, IPANE has been able to build a database that not only documents invasive plant occurrences, but also can be used as an early detection tool alerting staff to newly occurring or spreading species.

IPANE actively recruits, trains, and coordinates volunteers in IAS identification and the collection of scientific data. Multiple training programs are offered each year for new volunteers and to refresh the current volunteer pool. Data are collected in a plot from multiple habitat types within publicly accessible natural areas. Inside the plot, each invasive species is identified and data are taken on the abundance and distribution of the species, the reproductive stage of the plants, and information on soil moisture, light levels and associated species. Some species require documentation, including specimens or photos, to be later verified by IPANE staff. This is one step in data quality assurance. 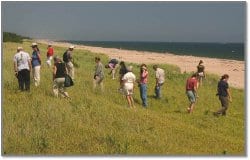 Once the data are collected, IPANE volunteers enter their own data on-line at the IPANE website: www.ipane.org. Data are then available to the public through the website. Data can be viewed in the form of maps or as data tables. These data provide critical information when making predictions about where species may spread and what influences establishment and success of a particular species.

To date, IPANE has recruited over 900 volunteers with more than 600 still active at our ten-year anniversary. We have collected data on more than 5500 plots which include occurrences of over 12,000 individuals. IPANE also maintains a database of regional herbaria which includes more than 8000 specimens. The historic data, some of which date back to the 1800’s, along with current field data allow scientists as well as the general public to investigate patterns of regional spread.

The IPANE program is a comprehensive web-based tool which provides an information hub for the public and volunteers facilitating the collection and for the analysis and communication of information related to invasive-species management in New England. Training events and the IPANE list-serve are tools used to educate volunteers, to disseminate the results of scientific study, and to alert the volunteers to potential incursions of new species in their region. We value the interactive feedback nature of IPANE: The volunteers collect data, which are used for research, and the research is distributed to the volunteers through training sessions and the website. The IPANE data and website are also used by conservation land managers, from public agencies and non-profit agencies alike, to aid in setting priorities for invasive-species control and management. Information on individual occurrences, abundances, reproductive status, and associated species all assist those working with IAS as they plan for future management strategies. 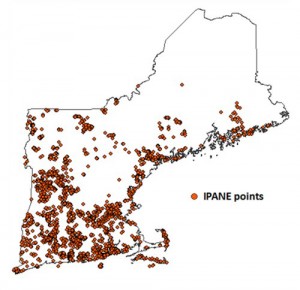 A current distribution map of all the IPANE points for New England, including all species.

In December of 2010, we unexpectedly lost our co-founder and director, Les Mehrhoff, which has marked a year of transitions for IPANE. Continuing with Les’ vision for IPANE, we are currently working on new partnerships that will allow for data exchange among IPANE and other atlas projects. These new collaborations will allow IPANE data to be viewed alongside national and international invasive species data sets through the EDDMapS project. This collaboration will provide us with more modern mapping tools for enhanced data visualization. We will also be adding new technologies to our data collection methods including smart phone applications (apps). Along with these updates, IPANE will be offering a series of trainings in spring 2012 for new and returning volunteers. We will be focusing on areas of northern New England including New Hampshire and Maine which have been under-surveyed up to this point.

For a schedule of training events or if you would like to become an IPANE volunteer, send an email to satreanor@gmail.com. You can also visit www.ipane.org for more information.

Sarah Treanor Bois is the volunteer coordinator for the Invasive Plant Atlas of New England and a PhD candidate in Ecology and Evolutionary Biology at the University of Connecticut. Feel free to contact her at satreanor@gmail.com.

Five Tips on Handling Difficult Customer Situations
Porous Surfaces – How Are We Doing?