Defining and Executing the Project

I had the fortunate experience of being in the right place, right time to be the lead landscape architect on the design and construction management team selected to restore a 17-acre riparian stream and forest buffer in Scarborough, Maine, as mitigation for a highway project. This was the early 1990s – there were no precedents for this type of project and we were consultants to a state agency, Maine DOT, that was used to building highways, not forests!

It would be very easy for me to fill pages and tease out details that ultimately became very critical to the success of the project, but for the purposes of this article, I will focus on the out-of-the-ordinary, but transferable, strategies that I found to be useful as I went on to subsequent ecological restoration work.

The site was originally forested with a perennial stream running through it (Mill Brook), and was located in a suburban area under intense pressure for development. The site was “stripped clean” by a developer who was frustrated that he could not develop it as intended due to municipal and environmental regulations. “Stripped clean” means that he took the woody vegetation and topsoil off the site, leaving bare mineral subgrade that immediately started eroding into the stream. (Note: He was fined five thousand dollars – a light penalty even in those days).

Once the site became part of the mitigation plan for Maine DOT’s project, the regulatory agencies were very supportive because of both the reforestation component and the potential of a restored riparian buffer to protect water quality. The mitigation plan was accepted. Maine DOT, realizing that this was an atypical project for its construction division, contracted our team to not only design the project but to oversee and administer the contractor that won the bid. It was a unique opportunity, but extremely challenging for its time.

I cannot stress “multi” disciplinary and “talent” enough, even though this might seem to be a no-brainer. In this case we had a wildlife biologist/wetland scientist, who understood the ecosystem that needed to be restored; a landscape architect (myself), who knew how to make bid documents that included detailed plans and specifications, in contractor language; a scientist with a forestry background; a soil scientist (we had to specify a high performing soil mix that didn’t involve stripping a forest); and a civil engineer. Because of the scale of the project and the need to keep costs reasonable, we engaged everyone’s expertise in order to find efficient ways to restore the topsoil layer, stabilize the site, and jump start a riparian forest buffer consisting of trees and shrubs. 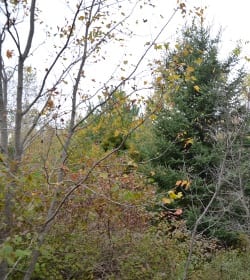 Careful attention to soils provided the foundation for a healthy forest ecosystem.

Our approach had to balance site stabilization with the primary mission of establishing a minimal-maintenance, viable tree and shrub community. Grasses and perennials need higher nutrient soils to become established for stabilization, but those same plants would also compete with the tree and shrub seedlings for water and nutrients. Trees like white pine and spruces could be directly planted into the subgrade material, which would eliminate competition from grasses but leave large areas prone to erosion.

We did have at our disposal salvaged forest topsoil from highway construction, but not enough for the entire site. Our soils plan included three categories of soil treatments: 1) on flatter areas where large scale quantities of trees and shrubs seedlings would be installed, apply 3-inches of well composted woodwaste based soil mix to add organic matter and forest mycorrhizae, which would stabilize the soils but favor tree growth over grasses; 2) in areas adjacent to the riparian zone apply a three-inch layer of a loam/compost mix to encourage grass growth to act as a barrier between more open soil areas and the streambank; and 3) on the streambank and in gullies, we covered the bare soils with jute mesh in gullies and riparian slopes and installed container grown shrubs. 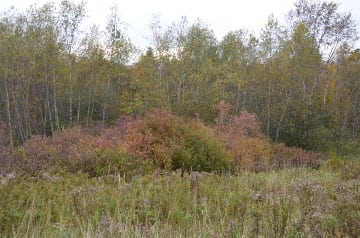 Severely eroded gullies were stabilized with jute mesh and planted with container grown shrubs such as Cornus sericea (Redtwig Dogwood) and Salix (Willow) species without the addition of a soil topdress to minimize erosion.

We didn’t want to add to the nutrient loading in the stream, so we did not apply any above-ground fertilizers.

The “How” of the project became the next challenge, but one for which we developed the more innovative solutions. How to apply the soil mixes? Traditional equipment would compact soils, damage existing vegetation that was critical for stability, and leave an open soil layer that would provide even more opportunities for erosion and sedimentation. We found that the forest industry dealt with similar challenges and through them discovered a piece of equipment called a “soil spreader.” The soil spreader consisted of blower attached to a low ground pressure, articulated dump truck (that functioned as the hopper). The truck, even when fully loaded could be driven on soil areas without getting bogged down or compacting the soils. Once in position the blower could be directed to blow soil onto adjacent areas from a distance. An operator controlled the direction and distance to ensure even coverage.

The result of this technique was just what we hoped for – coverage without killing the vegetation and with no soil compaction.

We were sure that fast growing pioneer species like poplar and gray birch would come in readily on their own. Consequently, we favored some evergreen species that were adaptable to poor soils, and might be slow to come in on their own. We introduced a few climax species that were required in the mitigation plan. We also planted tree and shrub seedlings primarily in large rows in open areas. We added below ground fertilizer packets developed for reforestation. We even tagged each tree (as it was planted) to make them easier to find and monitor. 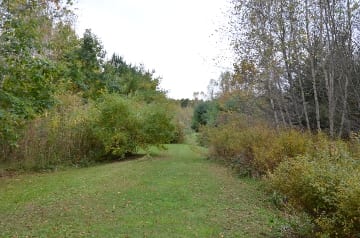 In spite of a good plan, there were some significant challenges posed by the contractor and Mother Nature. In the 1990s, the standard practice for state contracts of this size was low bid without targeted qualifications. The contractor that won the bid had no large scale forestry planting experience and was challenged about how to manage their own inexperienced crews. Furthermore, Mother Nature gave us a hot spring which made it difficult to keep the bareroot seedlings moist during planting operations, and two droughty summers which challenged seedling establishment.

Even given the challenges, the survival of the woody plants was remarkably high. Maine DOT requirements stipulate that the contractor shall guarantee plant survival for one year and replace dead or unacceptable plants within that time period. The remaining monitoring occurred during a subsequent four-year period, which was part of the mitigation plan requirements.

While we were relieved at the successful outcome, in retrospect, there are several things we would have done differently to increase plant survival and improve establishment: 1) short list contractors with experience prior to bidding; 2) find suppliers of small trees grown as tubelings or in small containers – or contract grow plants if those are not available; and 3) use a water-storing polymer product in each plant hole to retain and release moisture to the roots during dry periods. 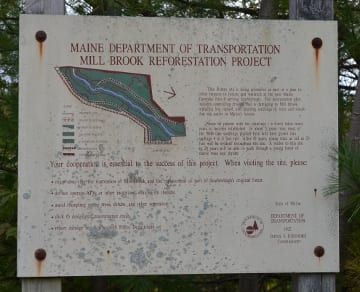 Strategy #4 – What about the Humans?

Remember, this site was in a suburban area and there was already evidence of ATV use throughout the site. We decided to plan for human use, because it was unrealistic (and not very neighborly) to try to keep people out. The question became – how could we minimize damage to the newly installed soils and plantings, and even minimize damage to other environmentally sensitive areas?

This is where the advantages of a site designer came in handy. I knew that if we couldn’t restrict site use, we needed to give people a clear indication of where to go and where not to go. I suggested a type of internal barrier system that would discourage ATVs, and even pedestrians, from cutting across the planted areas. But this barrier system had to be low cost and fit the natural context.

The team came up with the idea of using large cut trees as barriers – or Tree Barriers. We opted to use large softwood trees salvaged from the highway clearing operations (normally sent to mills or chipped). We chose softwood trees because they had a lower value to the clearing contractor and would be less attractive for people to cut up on site and take home for fuel. We specified that the trees were to be a minimum of 12-inch diameter at the top (to ensure the large size of the trunks), the trees were to be cut to a length of approximately 20 feet and the branches cut off to stubs of 12 inches. The stubs were important because they would prevent the trees from being easily rolled out of the way.

The salvaged trees were stockpiled and then placed prior to installation of the soils. Trees were positioned to discourage (not prohibit) overland travel and direct site users to the construction access road which eventually became the permanent trail through the site. Initially the vegetation was low and the Tree Barriers were very visible when we needed them to do the most good. In addition to the barriers, we added some interpretive signage at key points along the access path to explain the project and encourage people to avoid damaging the site. 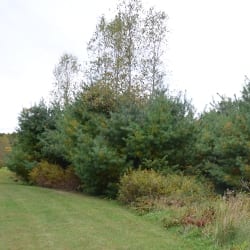 The construction access road has been seeded and maintained voluntarily by the adjacent residential development, keeping forest areas undisturbed.

The result was little to no damage to the site vegetation. The grasses, trees, and shrubs were undisturbed and over time grew up to further discourage damage to planted areas. The Tree Barriers eventually decomposed, just as they would in a normal forested ecosystem, providing additional structure, organic matter, and other important soil fauna.

Part 2 Maintaining and Monitoring the Project of this article discusses maintenance and post-construction strategies.

Lisa N. Cowan, PLA, ASLA, is the Principal of Studioverde – a collaborative of landscape architects and site sustainability professionals. Studioverde has offices in Cumberland, ME, and Austin, TX. Lisa is also an Officer in the Sustainable Design & Development Professional Practice Network with the American Society of Landscape Architects. She may be reached at Lisa Cowan lcowan@studioverdelandscape.com.