By Maureen Sundberg on October 16, 2016 in Climate Change, Trees

by Bert Cregg and Dana Ellison

Current climate projections indicate that mean global temperatures will increase 1-2oC (2-4oF) by 2050 and increase an additional 1-3oC (2-5oF) by the end of the century (Intergovernmental Panel on Climate Change [IPCC] 2007). In the Great Lakes region, summer temperatures are projected to increase by 4-8oC (7-14oF) by 2070-2099.  If greenhouse gas emissions continue to increase during this period, summer rainfall in the region is projected to decrease by 20% (Hayhoe et al. 2010). To put all of this into perspective, this means the climate in Lower Michigan could resemble that of present-day Oklahoma by the later part of this century (Fig. 1). In addition, severe heat waves and other extreme events are likely to increase in severity and intensity (Meehl and Tebaldi 2004). 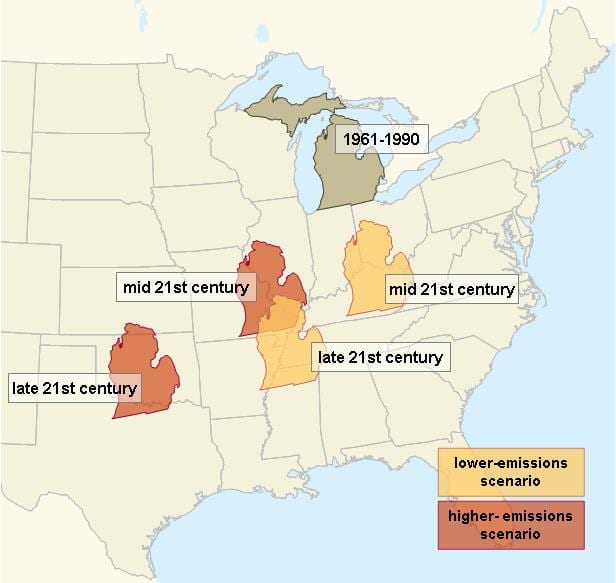 Figure 1. Projected changes in summer average temperature and rainfall for Michigan indicate that summers will feel progressively more like summers currently experienced by states to the southwest. Image by Marlene Cameron. Adapted from Hayhoe et al. 2010.

Trees in urban ecosystems are especially vulnerable to climate change since general warming will be exacerbated by urban heat island effects.  Urban heat island effects generally add 4oC (7oF) to air temperatures of cities compared to surrounding rural areas but may range as high as +9oC (16oF) for summer daytime temperatures in cities in the central U.S (Imhoff et al., 2010).  This magnitude of temperature increase can result in doubling of atmospheric humidity deficit, dramatically increasing tree water demand (Fig. 2). 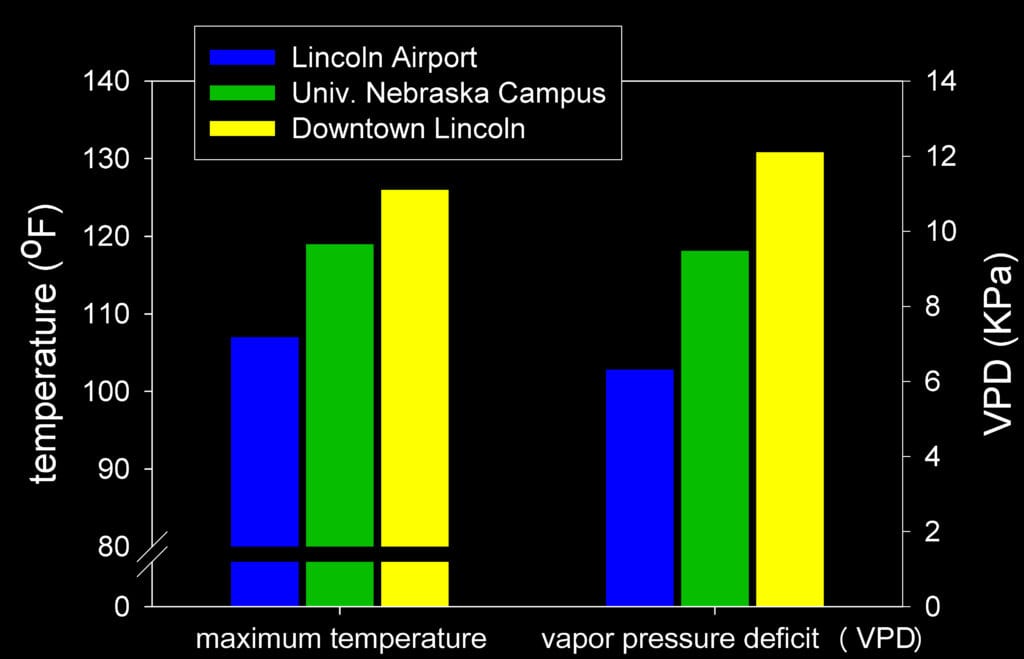 Landscapers and urban foresters need to incorporate climate predictions into tree selection decisions since trees are long-lived organisms and will experience changes in climate during their projected lifespan (Aitkin et al., 2008; Millar et al., 2007).  Selecting trees that are adapted to changing environmental conditions is essential to the future of urban and community forestry in Michigan and Midwest.  Since trees are sessile organisms and are unable to move when environments become unfavorable, their ability to acclimate to changing conditions is an important mechanism to adapt to climatic change (Nicotra, et al., 2010).  Common examples of plant acclimation responses to increased temperatures are changes in physiological processes such as photosynthetic rate (Cordell et al., 1998), changes in leaf and shoot morphology (Hovenden and Vander Schoor  2003; Morin et al., 2009; Royer et al., 2009), and changes in growth patterns (Kramer 1995).

In a project funded by the Michigan Nursery and Landscape Association and other research partners (see sidebar), we are investigating the potential impacts of warming temperatures on growth and physiology of urban trees. We are conducting the project in two phases.  In Phase 1, we are conducting intensive greenhouse trials to determine the relative ability of street tree cultivars to acclimate their physiological responses to changing temperature regimes.  In Phase 2, we are working with a community forestry partner (The Greening of Detroit) to compare the ability of cultivars to acclimate under contrasting urban conditions. The long term goal of this project is to determine whether street tree genotypes differ in their ability to acclimate to increasing temperatures.  In addition, we aim to identify key physiological factors that can guide further selection for projected future urban stress conditions.

We received bare-root liners (5’ whips or lightly-branched liners) of street tree cultivars from J. Frank Schmidt and Sons Nursery, Inc., Boring, OR (Table 1). The trees were planted in 10-gallon containers in a mixture of pine bark and peat moss (80:20 v:v) at the MSU Horticulture Teaching and Research Center (HTRC). Trees were placed in three sections of a glass greenhouse at the MSU Research Greenhouses (Fig. 3). Trees of each cultivar were assigned to one of three temperature acclimation treatments: High, Medium, or Low. The ‘Low’ temperature regime was designed to track average air temperatures for the area. Average temperatures were calculated from 1996-2011 daily temperatures for East Lansing, MI from the MSU Enviro-Weather website. Medium and High temperatures tracked the average daily temperature +5oC or +10oC, respectively. 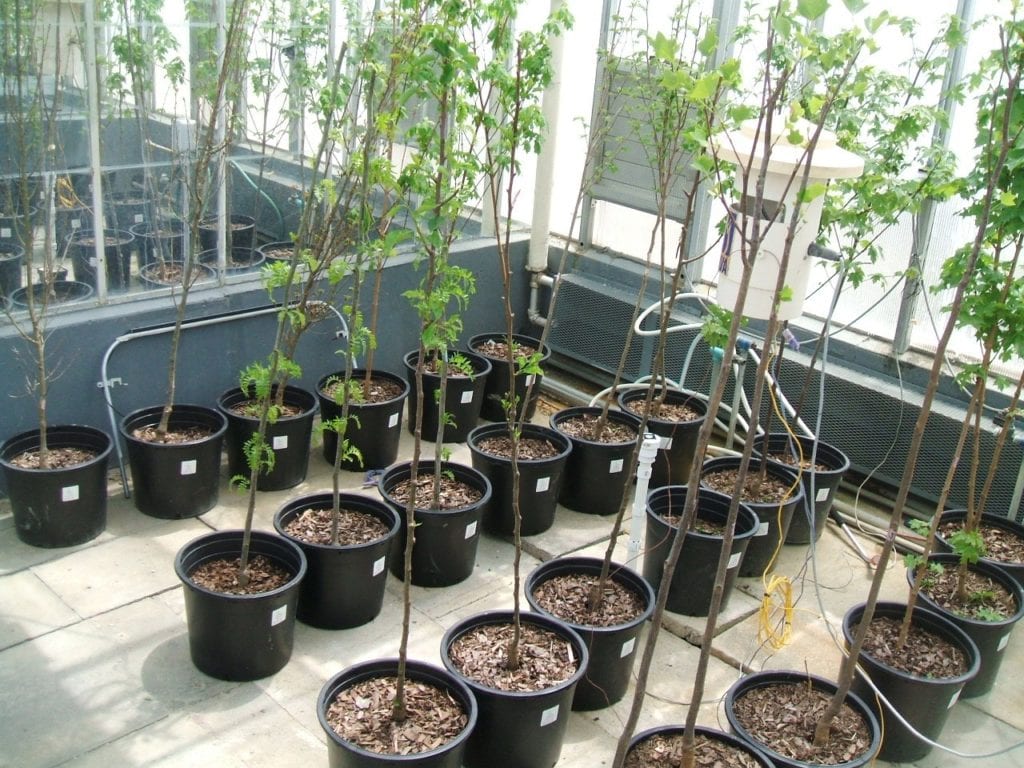 After eight weeks of acclimation we evaluated the response of light saturated photosynthesis and leaf respiration to temperature (Fig. 4). Temperature and respiration response curves were developed for each tree using a portable photosynthesis system (LI-6400, Li-Cor, Inc., Lincoln, NE) in a growth chamber at temperatures of 25, 30, 35, 40, and 45oC. 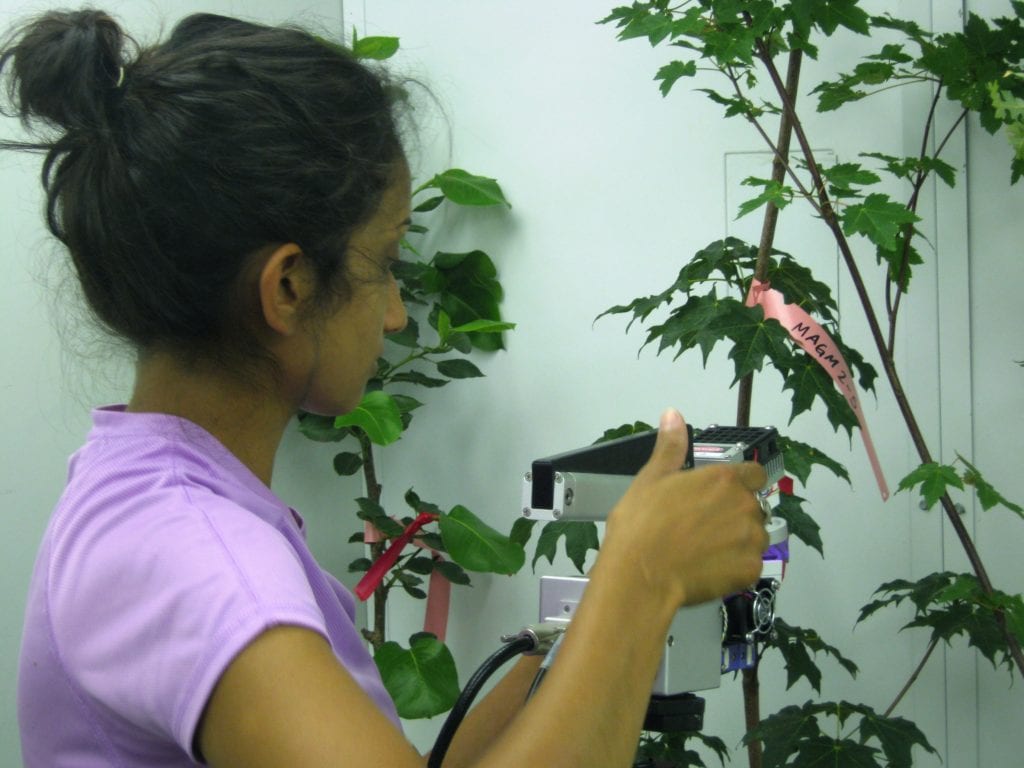 Twenty large (1 ½” caliper) liners of each of the nine cultivars used in Phase 1 were received from J. Frank Schmidt nursery in April 2012. The trees were planted in 20-gallon containers and grown for an additional year in the Pot-in-Pot research nursery at the MSU HTRC in order to increase size before planting in Detroit. In May 2013, Greening of Detroit volunteers and staff planted ten trees of each cultivar on two adjacent but contrasting sites near downtown Detroit (Fig. 5). Half of the trees were planted in the median of a major thoroughfare (St. Aubin Avenue) and half were planted in an adjacent park (Lafayette Park). We installed portable data-loggers and sensors to record temperature and relative humidity at each site. Although air temperatures during the summer were slightly warmer on the street median than in the adjacent park, tree moisture stress levels (leaf water potential) were generally similar, except during a drought period at the end of the 2015 growing season. Survival and growth of most cultivars was good to excellent. The principle cause of mortality was vandalism or poor maintenance practices – mower or weed-whip damage to trees on the median. The elm cultivar had very good growth and form and appeared to be well suited to the median site. 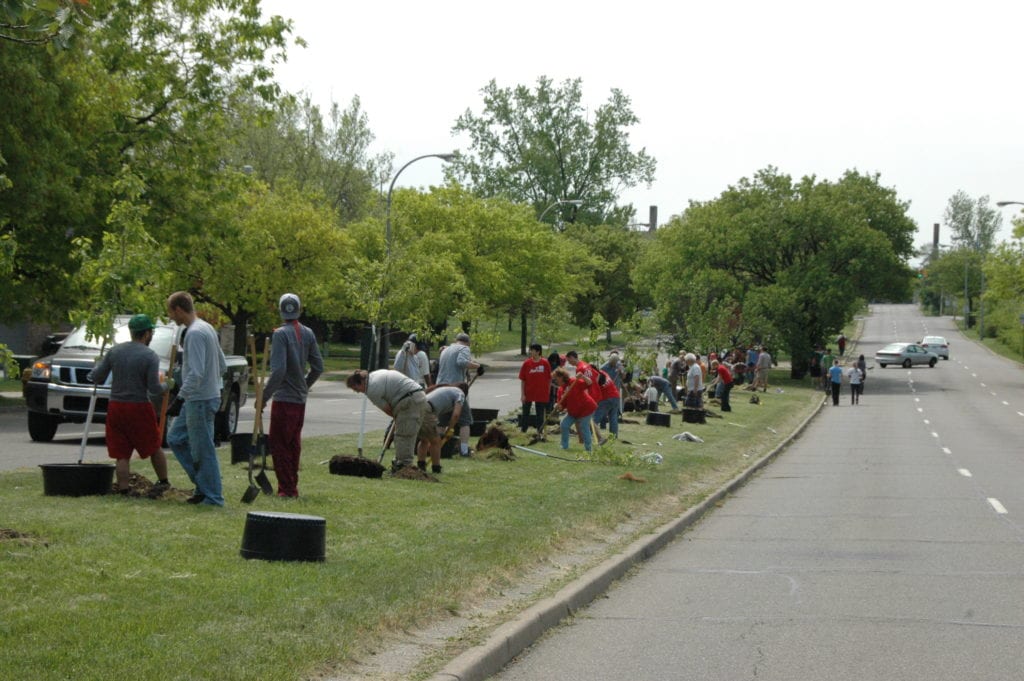 Increasing levels of CO2 and other atmospheric greenhouse gasses are predicted to lead to increased temperatures and more frequent severe drought events. Trees are key components of green infrastructure needed to mitigate changes in climate by sequestering carbon and reducing energy use to cool buildings. However, projected increases in temperatures will increase stresses on trees; especially in urban areas where moisture deficits are amplified by urban heat island effects and limited root volumes (Cregg, 1995; Krizek and Dubik, 1987; Lindsey and Bassuk, 1991). Selecting trees that are able to acclimate their physiology and morphology to future climatic conditions will be critical in order to realize the benefits and ecosystem services of trees in urban and community forests. 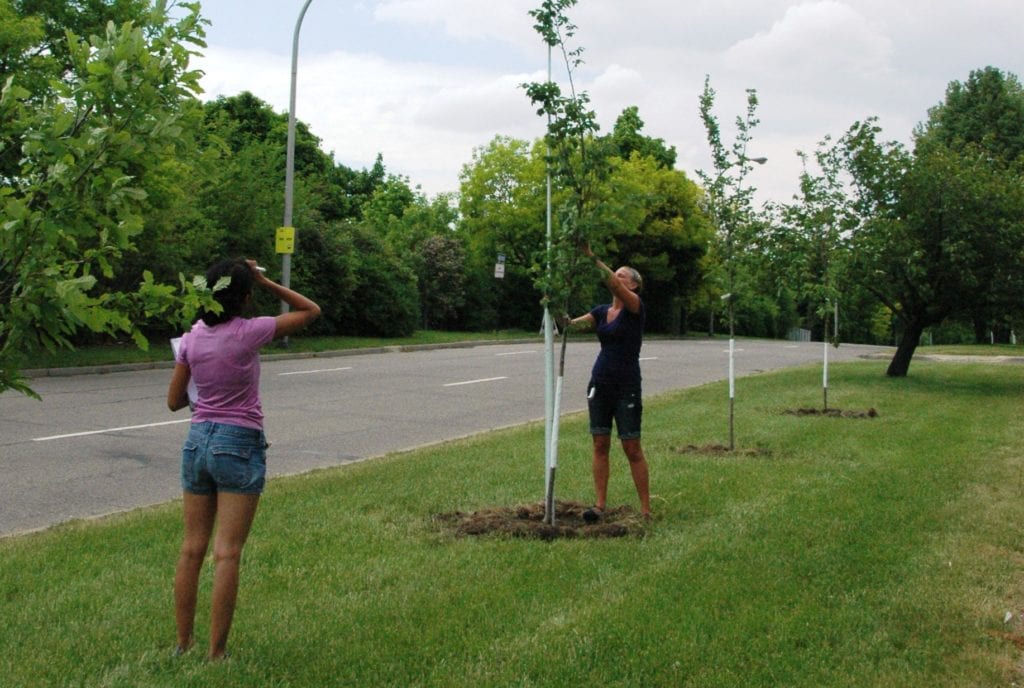 Krizek, D.T. and S.P. Dubik. 1987.  Influence of water stress and restricted root volume on growth and development of urban trees.  Journal of Arboriculture 13:47-55.

Dr. Bert Cregg is an Associate Professor and Extension Specialist for landscape, nursery, and Christmas tree production at Michigan State University (MSU). His expertise includes stress physiology, plant nutrition, and plant response to environmental stresses. Dr. Cregg writes frequently on landscape and nursery topics regular and is regular contributor the MSU Extension News, the Michigan Landscape magazine, and the Great Lakes Christmas Tree Journal. Prior to joining the MSU faculty in 1999, Dr. Cregg was a Tree Physiology Project Leader for International Paper and a Research Plant Physiologist of the USDA Forest Service. He earned his Ph.D. in Forest Resources at the University of Georgia and holds a Master of Science in Forestry from Oklahoma State University and Bachelor of Science in Forest Management from Washington State University.