This article was first posted on May 1, 2017, on the Last Word on Nothing blog and is reprinted with the permission of the author. 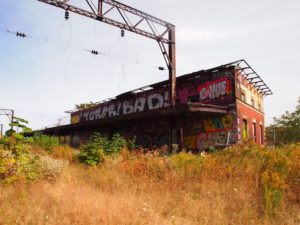 In October of 2013, I toured three miles of disused railroad line in Philadelphia. Some of it was underground, some on ground level, and some elevated. All of it was covered in spontaneous vegetation—garden plants, common weeds, and native species, a wild, diverse hodgepodge of over 50 species alive with fungi and butterflies and ladybugs. I even saw a groundhog. My guides that day included Dale Hendricks, a permaculture expert and owner/operator of Green Light Plants, and landscape designer and train enthusiast Paul vanMeter, an advocate for turning the city’s hidden wilderness into a park. Sadly, Paul died unexpectedly in early 2014. 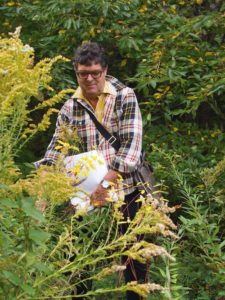 Paul VanMeter, late champion of turning the rail line into a park, in 2013.

I was moved on our tour of the rail line by the beauty and tenacity of nature, even in the heart of the city. By the time we finished our tour, on a broad, rippling meadow of golden grasses and wildflowers that had grown on top of rusting tracks, two stories above the street, I was wiping my eyes a little. Somehow in this place, I felt an intimation of a kind of reconciliation between humans and the rest of nature, which we have treated so poorly for so long and become so sadly alienated from, just as a person who has been cruel can’t look the victim of their cruelty in the face. Here nature was showing us her resilience and her wild beauty and offering to meet us where most of us live now, in the city. There in the low sun were yellow blooming primroses, elm trees growing sideways out of walls, paulownia trees with leaves so big some of them were tagged with graffiti, milkweed with fluff spilling from its pods, pokeweed in berry, aspen, cherry, tree of heaven, common mullein, oriental bittersweet, autumn olive, southern magnolia, and Queen Anne’s lace. 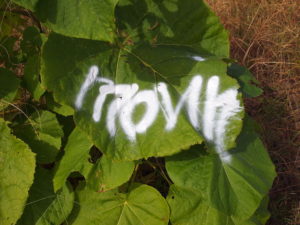 The tricky thing about this urban wilderness, though, was what I think of as the High Line Problem. New York’s High Line park also began as an abandoned rail line, and just as in Philadelphia, the plants that grew there on their own captured the imagination of the city. But when the park was developed, they couldn’t simply lean a ladder up to the tracks and tell people to have fun. For safety reasons, for city planning reasons, for accessibility for people using wheelchairs, and for aesthetic reasons, they ended up more or less scraping the place down to the bare surface and starting over. Landscape designer Piet Oudolf nodded to the texture of the wild weeds in his beautiful design, but perhaps ironically for a park that sprang from an appreciation of the feral and untended, it now has the highest maintenance costs of any park in the city. 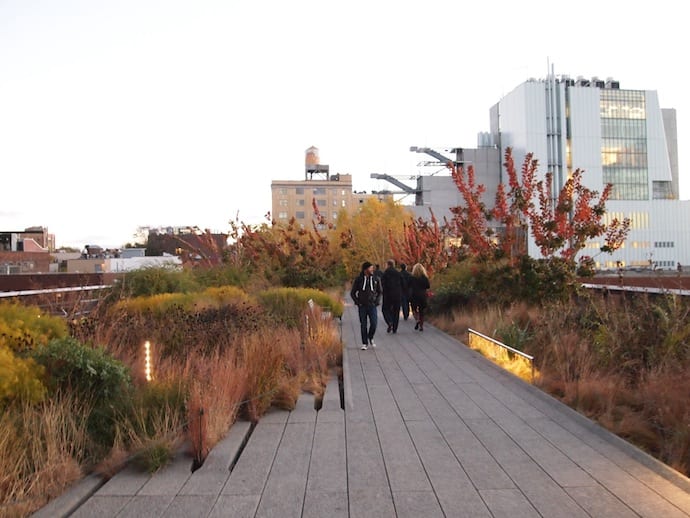 If “the Rail Park” is to come to be—and it is—it too will have to give up some of its wildness. Recently, the first section of the park was put out to bid to be turned into a park. I spoke with Bryan Hanes, the landscape designer who won the contract, about his vision for the design. Hanes said that in discussions with the neighbors, it is clear that people like the plants that are already there. But they will have to go. “The reality is, most of that can’t be saved,” he says. “To turn it into an active, useful park space most of the ground has to be torn up.” Much of the soil is contaminated, it is a long way from meeting city codes and ADA requirements, and several of the plants woven into the diverse mix are considered “invasive”. 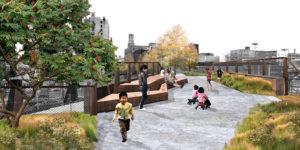 A sketch from landscape architect Bryan Hanes for part of the Rail Park.

But like Oudolf, Hanes will take some cues from what he uproots. He promises a similar texture but “a predominantly native palette. Some of the weed trees we saw growing up, we are going to replace them with something more horticulturally appropriate, more ecologically appropriate.” I completely understand the many constraints Hanes is working with, but I push back a bit, wondering why we have to be so purist about native species in the heart of a city, wondering why we can’t let nature decide instead of always being the boss. Surely we can enable access for people with wheelchairs without ripping everything up? Hanes suggests that a lighter touch might be possible with some of the future sections of the project. At the moment, he’s only designing one part of it, a sort of entryway that he envisions as being a bit more formal. Maybe someday everyone will be able to wander the meadow of wild nature level with second-story windows as I did that golden afternoon and feel that same glimmer of rapprochement between a sometimes-destructive species and the rich natures that created us through slow evolutionary time. 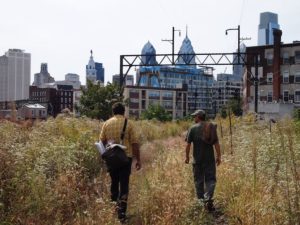 The elevated section of the rail line, with Dale Hendricks, Paul VanMeter, and the Philadelphia skyline, 2013.

I don’t claim that this kind of autonomous city ecosystem is better than Yellowstone or Yosemite or any large protected area in which you can get well and truly lost. I don’t claim it is worse, either. It is different. The enthusiasm for the High Line and the Rail Park show that we can appreciate and connect with wild urban landscapes, despite our culture of hating “invasive” plants and our American disdain for any “nature” smaller than at least a small state. I just hope that someday we solve the High Line Problem and learn how to enjoy our urban wildernesses, officially, and in large numbers, without tidying their wildness away. 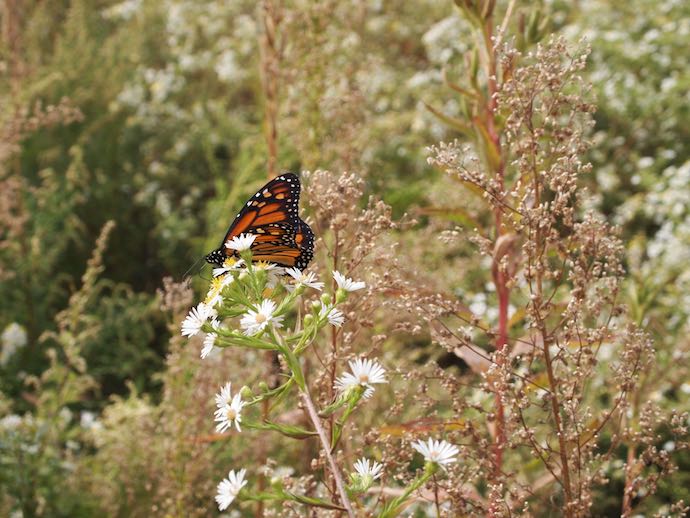 Monarch butterfly on the rail line.

Emma Marris is a writer of people and nature and is based in Klamath Falls, Oregon. Emma’s goal is to find and tell stories that help us understand the past; take meaningful action in the present; and move towards a greener, wilder, happier and more equal future. Emma’s stories have appeared in many national publications including the National Geographic and the New York Times. Emma is currently at work on a book about human relationships with wild animals in a changing world. Wild Souls will combine philosophy, science, adventure, and emotion as she tries to answer a tough question: what do we owe nonhuman animals when we humans have so changed the world they must live in? Expect it from Bloomsbury USA in 2021!

Her previous book, Rambunctious Garden, looks at how conservation is changing in the Anthropocene.