I used to teach a course on biodiversity for non-science majors at the University of Notre Dame, which I really enjoyed. We spent a lot of time covering climate change, and I always started off the discussion by talking about photosynthesis and then asking the following question:

Which of the following contributes the most to a tree’s biomass?

If you are like most of my students, you probably guessed E. But the correct answer is actually C, the air. During photosynthesis, plants take in carbon dioxide from the atmosphere and combine it with water and energy from the sun to form sugar molecules. The carbon in the sugar molecules is then used by the plants to (among other things) build tissues like leaves, roots, and wood. 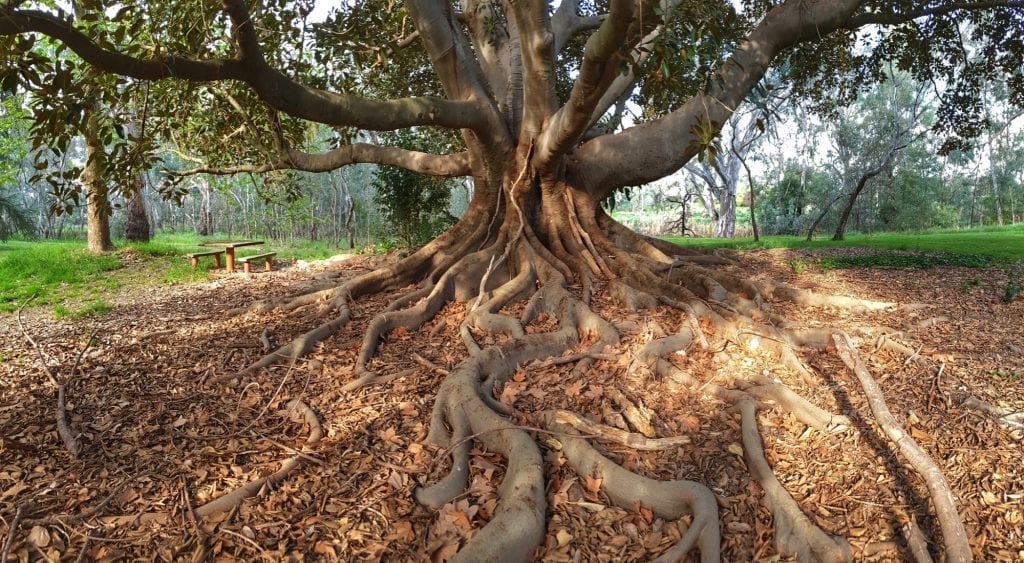 Carbon sequestration is a key component to mitigating the climate crisis. There has been a lot of focus on the potential for new technologies to effectively remove carbon from the atmosphere, but there are no technologies in existence or on the horizon that can compete with trees in terms of carbon sequestration. Trees are efficient, effective, and they can be deployed on a large scale. (It’s worth mentioning here that grasslands are also good at carbon sequestration, and in arid areas where grasslands are more common than forests, restoration of grasslands may be more effective at mitigating climate change.) 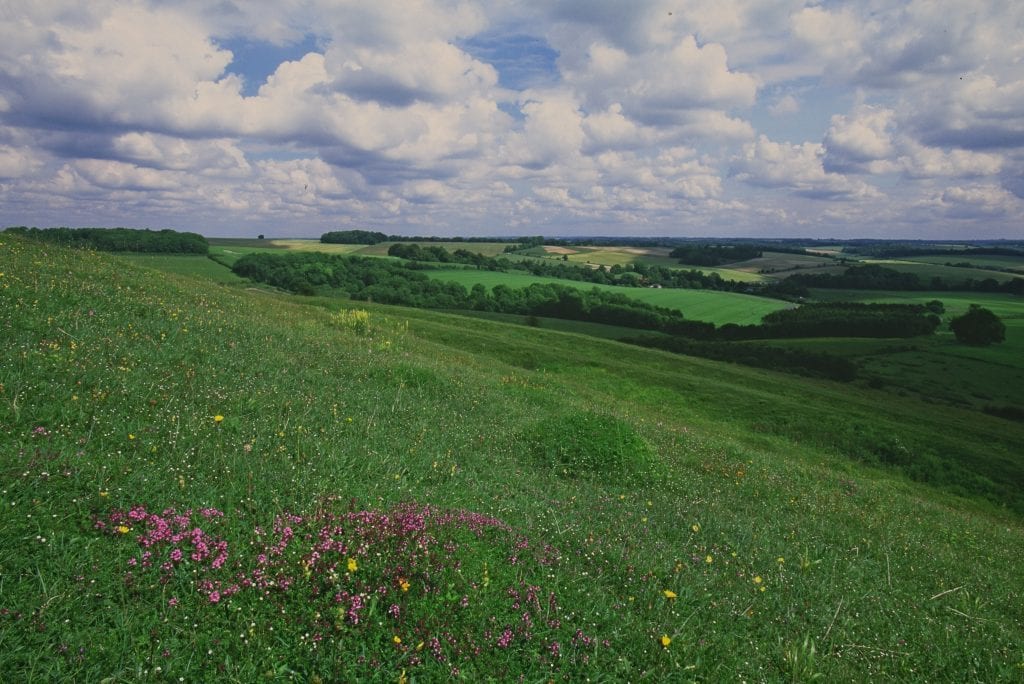 The restoration of grasslands – including Britain’s chalk downlands, discussed further in this post – can also support carbon sequestration, a process that helps to reduce carbon dioxide in the atmosphere and mitigate climate change. Photo: Natural England/Chris Gomersall

In my last post about the climate crisis, I talked about how important it is to limit warming to 1.5°C above pre-industrial levels. The recent IPCC report recommends restoring 1 billion acres of forested habitat globally as part of a suite of actions to reach that goal. At the time, it was unclear if that was feasible, but now, a new study published in Science by Jean-Francois Bastin et al. shows not only how reforestation can play a significant role in mitigating the climate crisis, but also that it is actually possible to restore 0.9 billion acres globally. These scientists used modeling techniques to determine how much of the earth’s land has the appropriate climate and soil conditions to support forest—and even when cropland, urban areas, and grasslands were excluded, there were still 0.9 billion acres available around the globe. This is enough to take up approximately two-thirds of the carbon released since the industrial revolution!

Now, this does come with some caveats – they did not distinguish between private and public lands, for example. Reforesting these areas won’t be straightforward, but the study is hopeful in that it shows that it is technically possible to plant enough trees to help keep warming to 1.5°C. This would help us avoid the most catastrophic effects of climate change. 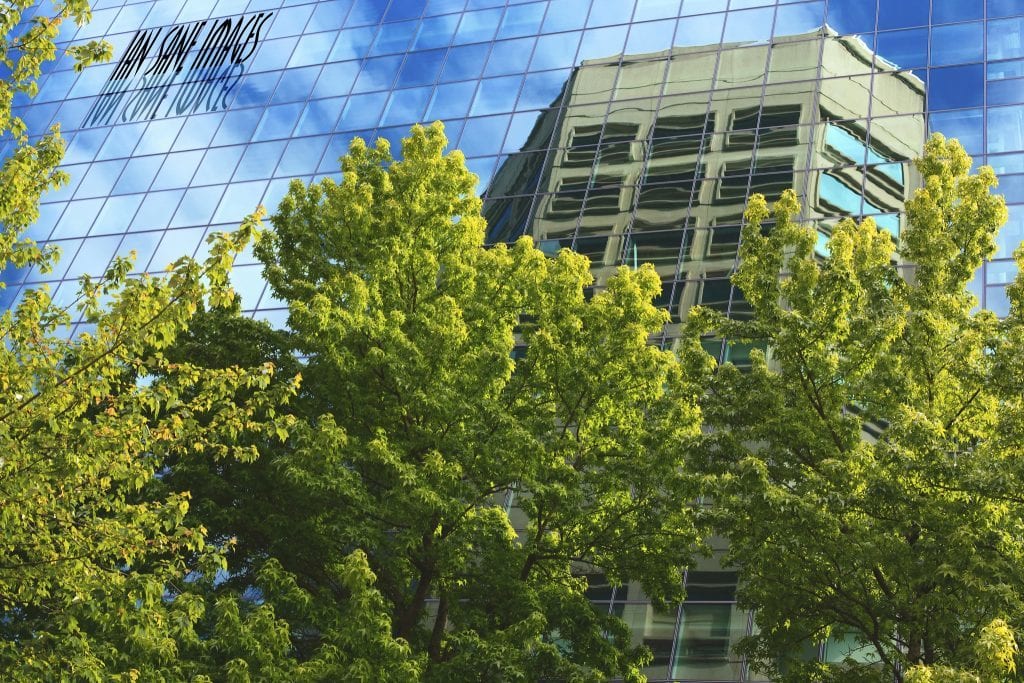 In cities and towns, trees can help to alleviate the urban heat island effect, which can mitigate some of the impacts of climate change on humans, pollinators, and other creatures. Photo: Ian Sane/Flickr Creative Commons 2.0

This is significant in itself, but trees’ benefits extend even beyond carbon sequestration. In cities and towns, trees can help to alleviate the urban heat island effect (UHIE), which is caused by large amounts of impervious surfaces, such as concrete and asphalt, which raise the temperature of urban areas – often by several degrees. Before we get to how trees can help, it is important to understand the problem that the UHIE, combined with climate change, poses.

The majority of the world’s population now resides in urban areas. Many regions—both in the United States and around the world—will experience increases in the length and intensity of heatwaves as a result of climate change, and the UHIE will intensify the effects of these heatwaves in urban areas. Heatwaves can result in illness or death – even small increases in temperature are associated with an increase in heat related mortality. The most vulnerable groups are the elderly, the poor, people who work outside, and some communities of color.

In addition to the problems this poses for the human population, increasing temperatures in cities and towns can have negative effects on our urban bee populations. Researchers in Raleigh, North Carolina found that bee abundance in various areas of the city decreased with increasing air temperatures – even when there are plenty of floral resources for the bees. While a few bee species did do better at warmer temperatures, most did not, leading to decreased overall abundance of bees. Bottom line: Not only do increased temperatures have negative impacts on some urban bees, but intensified heat waves associated with the climate crisis, combined with the UHIE, may present further obstacles for bees in some urban areas. 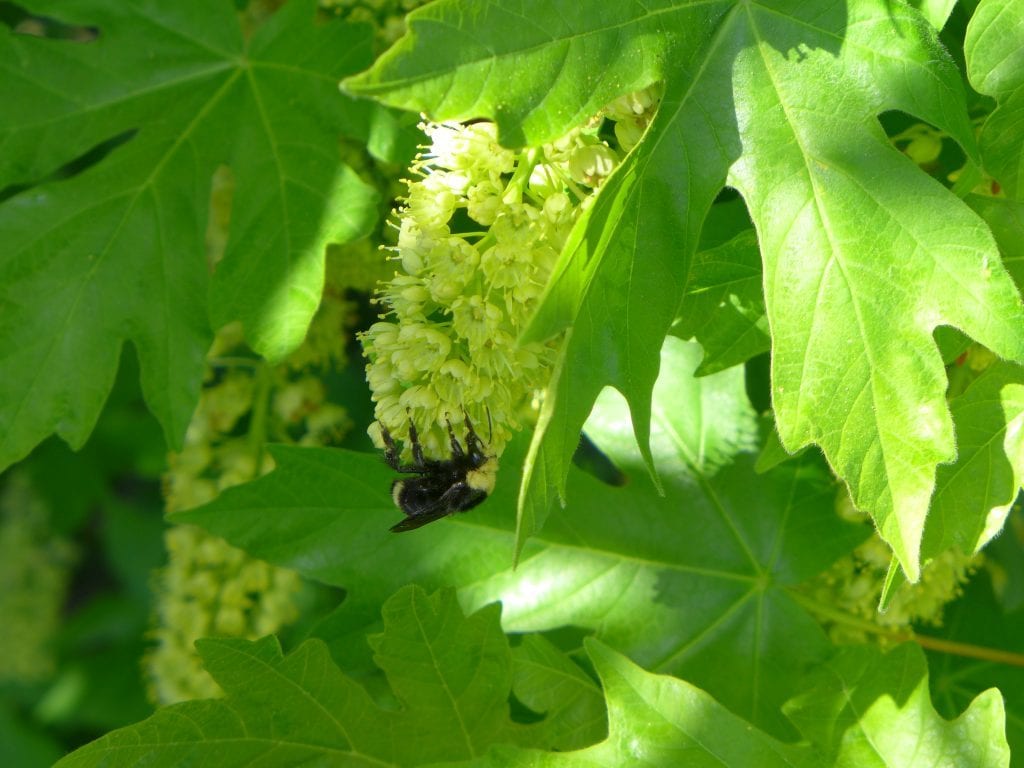 High temperatures can have negative impacts on urban pollinators, like this yellow-faced bumble bee (Bombus vosnesenskii), but fortunately, planting trees can help to mitigate these effects. Photo: Xerces Society/Kitty Bolte

Thankfully, planting trees can help alleviate the UHIE and support both human and bee health. Recent research by Carly Ziter et al. demonstrates the importance of tree cover to air temperature in cities and towns. Using bicycle-mounted sensors to measure temperature along transects in Madison, Wisconsin, the researchers found that temperatures decreased with tree cover, and the coolest temperatures occurred in areas with at least 40% tree cover. This cooling effect was strongest in larger swaths of tree cover. The cooling effects of trees were also strongest on hot days – meaning that tree cover in urban areas may be especially important during heat waves.

Planting trees is not only an important action many of us can take to help fight the climate crisis, but also an action that will have a significant impact on pollinator conservation. Native trees – such as oaks, willows, and maples – are known for supporting butterflies and moths, as many Lepidopterans rely on trees as caterpillars. The importance of native trees extends beyond the needs of invertebrates, too: Research in the Washington, D.C. area shows that native trees in urban areas have many more caterpillars than non-native trees, which supports the local bird populations that depend upon these caterpillars for food. 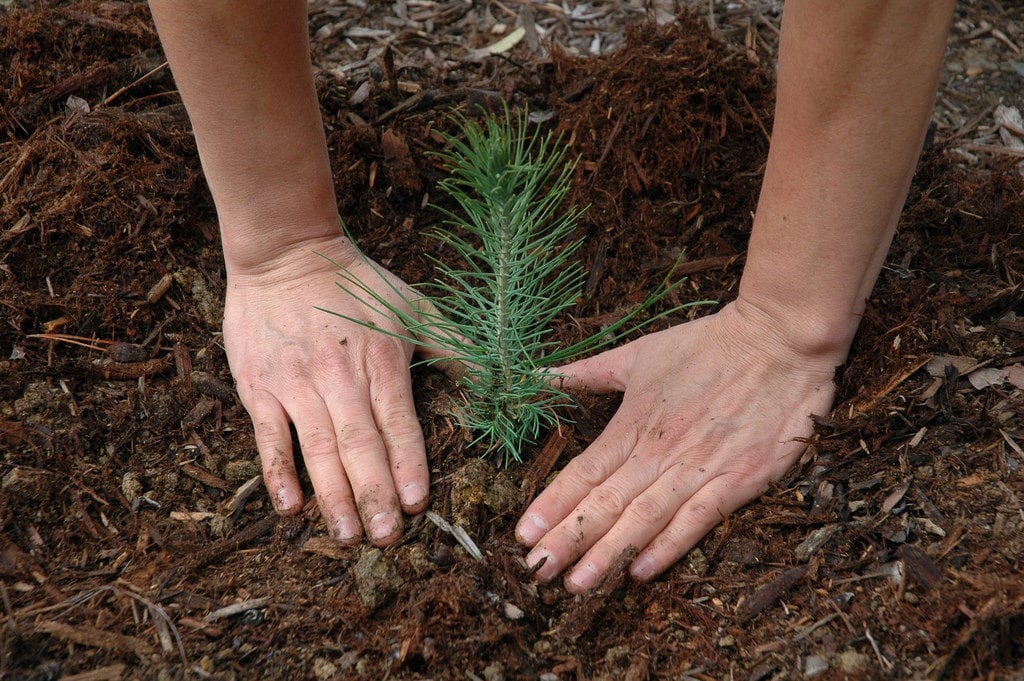 Planting trees not only helps to sequester carbon, but also serves to reduce summer temperatures in urban areas and provides important resources for invertebrates and the animals that depend on them. Photo: U.S. Forest Service

So plant a native tree today! In doing so, you will be helping to sequester carbon and reduce summer temperatures in your neighborhood, as well as providing important resources for butterflies and moths, and the animals that depend on them. That’s a lot of benefits from one very tangible action!

This article was first posted August 13, 2019 on the Xerces blog and is reprinted with the permission of the author and Xerces Society.

Angela Laws  is Monarch and Pollinator Ecologist for The Xerces Society.

Eco-Answers from the Pros: Managing Invasive Honeysuckle
From Wasteland to Wildflower Meadow at Greenfield Community College