A 1990’s streambank water control structure at the Mundy Wildflower Garden, Ithaca, NY was found to be failing. “Gabion baskets,” commonly used to control flooding, were toppling off the structure into the creek bed. Something had to be done. 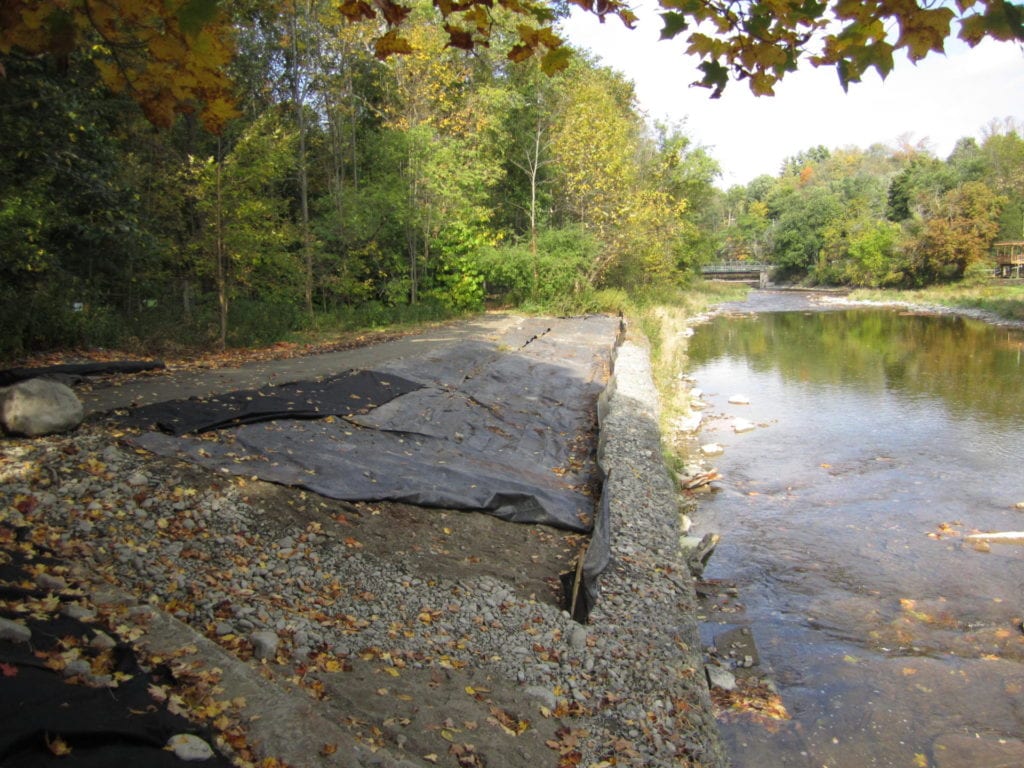 Fall 2014, with the gabions restructured, the site was left to settle over the winter. Photo: T Bittner

Cornell engineers were called in, and by the fall of 2014 the site was restructured and left to settle into its new configuration over winter. The planting bed now had a top dressing of soilless gravel to a depth of approximately 4-6 inches. The gravel was chosen from deep in the gravel pit (approximately 70 feet down) in order to match our size specifications – of very small gravel for ease of planting and no boulders! The bank was also armored at the east end with quarry block. These blocks are stepped, presenting a cozy place for both plants and people; anyone can sit close to the plants and view a beautiful waterfall. 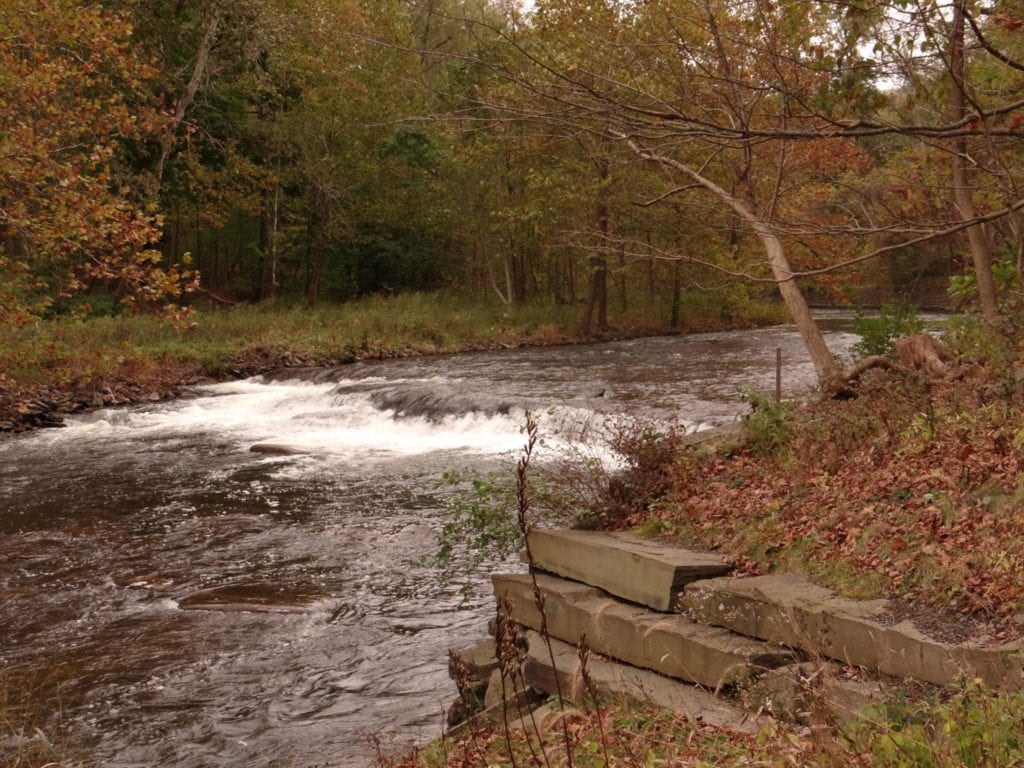 That same fall and winter, volunteers started cleaning and sowing seeds for planting the following spring. In the late spring and summer of 2015, the graded, soilless gravel was planted with the small plugs grown in the hoop house and broadcast with additional seeds. 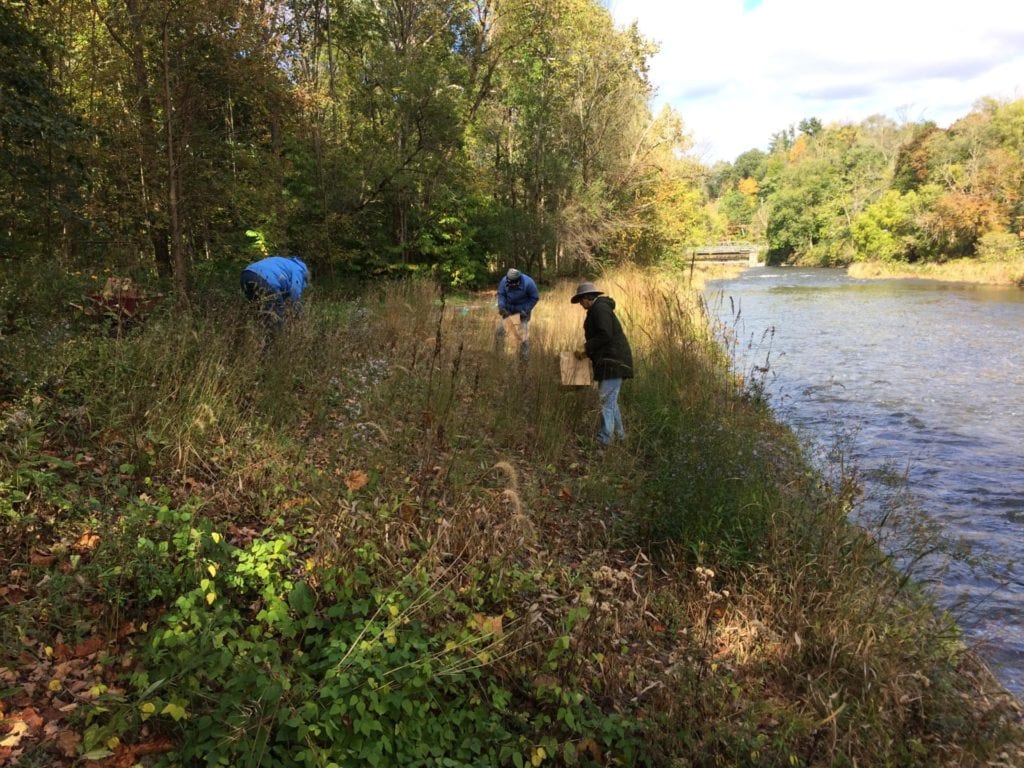 In the fall of 2014, volunteers collected native plant seed that was sown in a hoop house. The resultant plugs were planted at the site in the late spring and summer of 2015. Photo: Krissy Boys

Four years later, most plants are growing and seeding themselves in throughout the site. Warm season grasses have replaced the cool season placeholder grasses at the bottom of the slope against the edge of the gabion baskets – closest to the water but actually 3-4 feet above the water line. We expect the root system of these grasses to withstand even the harshest scouring from winter ice mounds and rushing water during spring melt. And as slower growing species begin to fill in, we feel the gabion restoration is a success.

What happened in those intervening years? And how do we measure success?

Wildlife is one measure. Butterflies and bees are finding many host and nectar plants within this planting. Turtles dig nests among the grasses at the lower edge, a joy even though they disturb some of the smaller plants. 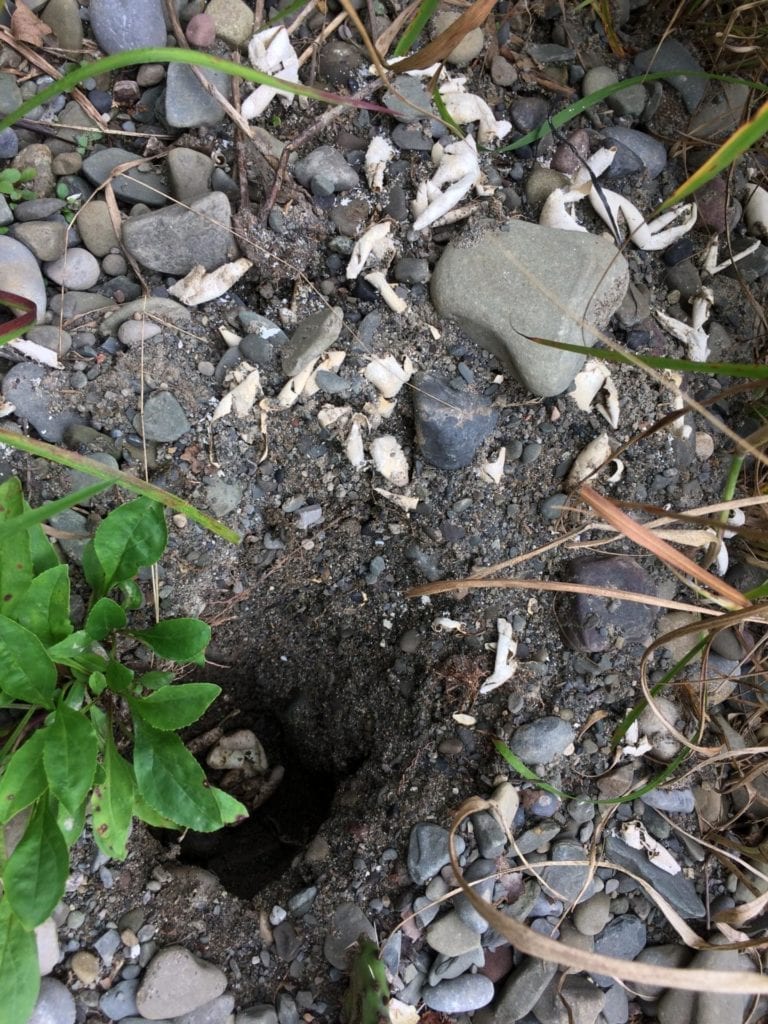 Maintenance is another measure. Weeding has been far less than for an equivalent size soil bed, as many weeds cannot survive in the gravel. We did run into a few trouble spots during early plant establishment in this extremely well-drained environment. The first problem was a lack of rain for an entire season in 2016 while the plants were still small and we were adding additional plugs and seed. The young plants needed supplemental watering several times a week. But then, who in the Northeast did not water their garden in 2016? We used a 100-gallon tank mounted on a small utility vehicle equipped with a pump to get water to the area.

Well-established plants are the key to the longevity of the planting. The warm season grasses with their root systems (ultimately around 3-4+ feet deep) will support the gravel garden’s structure and are good design elements. Native grasses and sedges are used throughout as the dominant species. They are planted in wide bands, following a serpentine pattern running parallel to the creek, and intermixed with flowering plants. The bands create waves of vegetation easily recognized as different species. These design lines are keenly represented by little blue stem as it moves against the taller big blue (Andropogon gerardii), Indian grass (Sorgastrum nutans), and switch grass (Panicum virgatum). 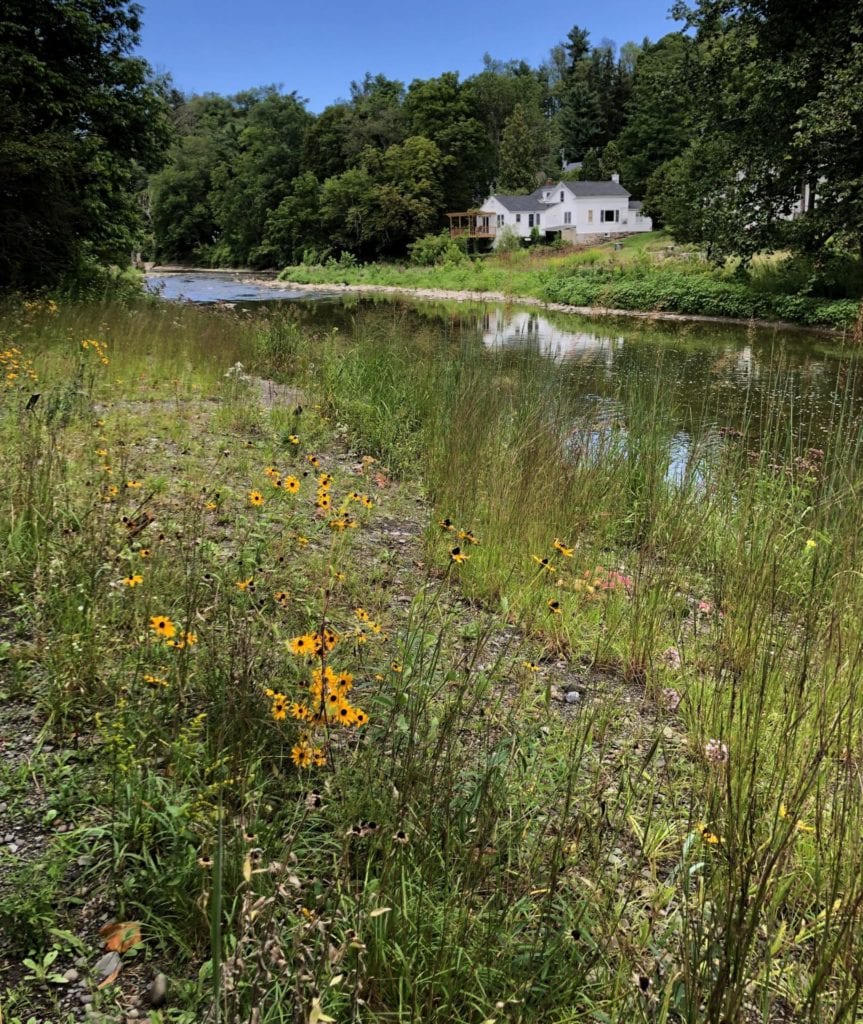 Most species grew well and prospered, i.e. propagated themselves by self-sowing. Some particularly successful forbs are: Penstemon hirsutus, Rudbeckia hirta and R. triloba, Cirsium pumilum, Allium cernuum, Asclepias tuberosa, Solidago nemoralis, S. bicolor & S. ridgida, Aquilegia canandensis, Sanguinaria canadensis, and asters such as Symphiotrichum undulatum, Eurybia divaricata and Symphyotrichum pilosum var. pringlii. Small sedges and grasses such as Carex tonsa var. rugospermum and Danthonia spicata are spreading in the foreground. Clematis virginiana is not aggressive as it weaves its way throughout the planting hugging the surface. Opuntia are happy when they are not dislodged by foot traffic. Some plants, e.g. Symphiotrichum laeve, are too attractive to deer, so while it survives, the deer browsing reduces its height, breadth, and ultimately its visibility. Others such as Carex eburnea and Geranium maculatum are particular about their location at the site, preferring the shadier edges.

There have only been a few notable failures. We have not seen Agastache nepitoides or Gentianella quinquefolia survive more than one season, and we have not seen Pycnanthemum muticum thrive even though P. virginanum is well established. Out of 58 genera represented in the original planting, and even more added in the next years, only these two species completely failed. We feel this survival rate represents a real success! 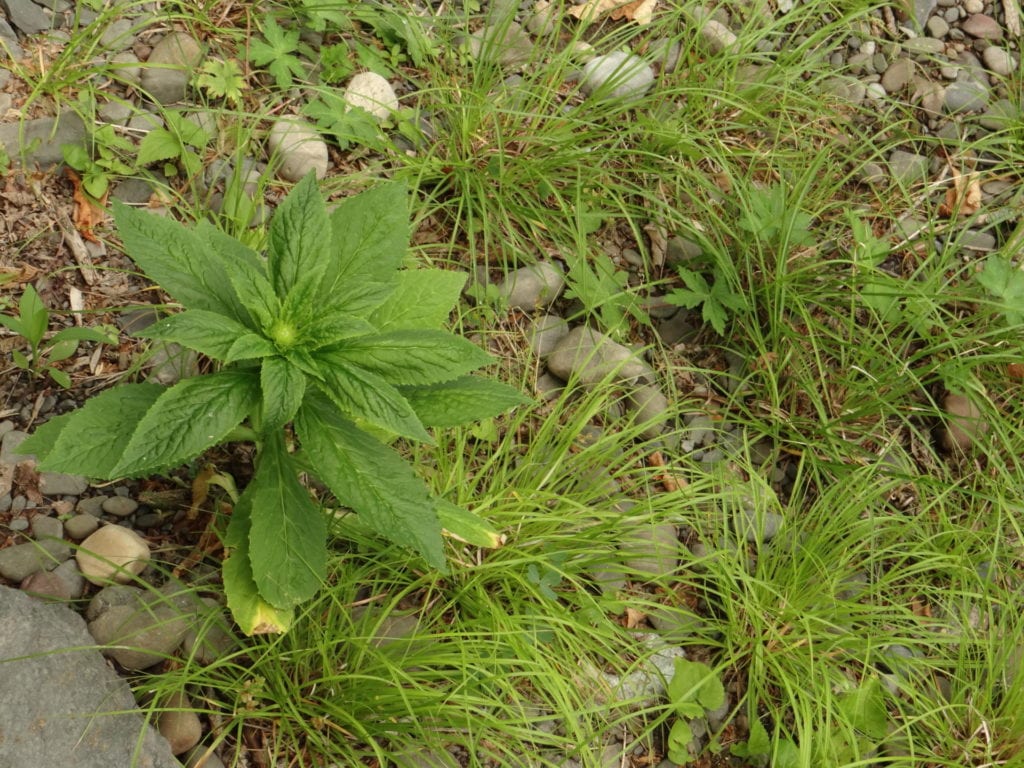 The most difficult takeaway of this project for many people observing the site is the time it takes for plants to establish at some of the higher, dryer elevations. The top of the grade has significantly more xeric conditions than at the base. For example, Sporobolus heterolepis (prairie drop seed) though perfectly adapted to the site, is naturally a slow-to-establish species. Currently it is beginning to flower and fruit, but the effect is still so wispy that the plants appear to be transparent to most observers. A low cord had to be installed to keep visitors from walking across the entire planting, making it obvious this is an intentionally planted and maintained garden. 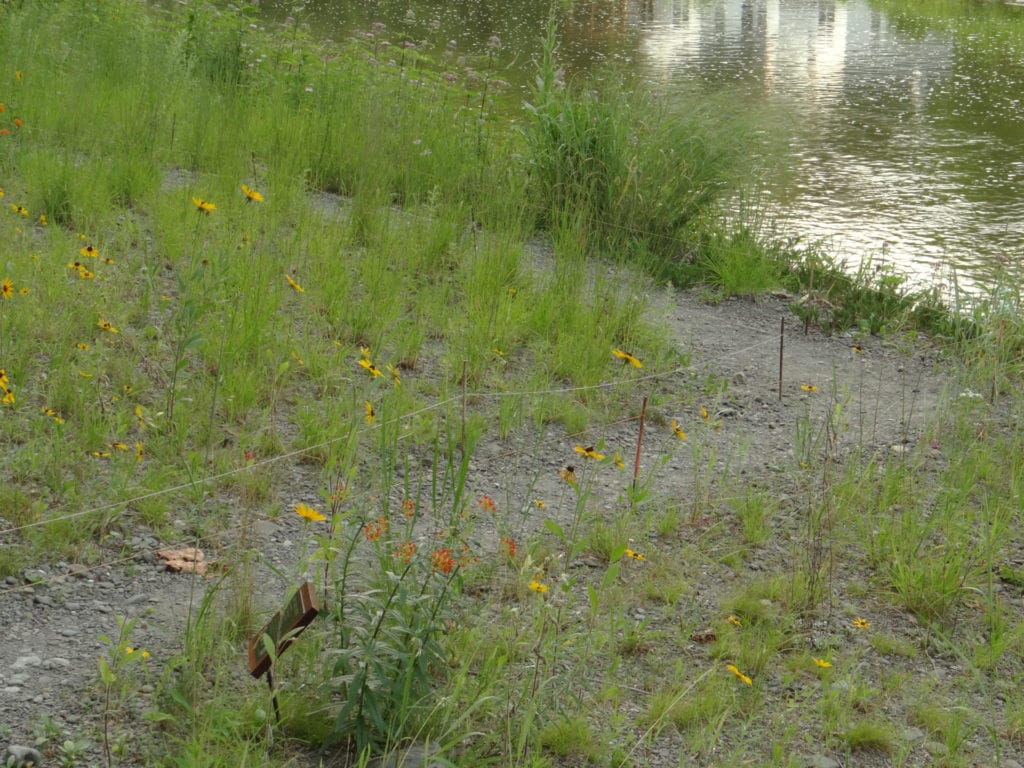 Cordoning off the planting turned out to be essential. Photo: Robert Wesley

As for me, I can see the Sporobolis and I enjoy watching them mature and grow into the space. I frequently express (when others frown) how much I like the gravel showing in between the plants – these plants have innate abilities and stalwart attitudes towards establishment in a gravel bed. I get the most joy out of the tiny seedlings I observe within the sand and gravel. I am not an impatient gardener and appreciate the slow evolution of the space; it is the visitor who often is not able to interpret the concept, which can feel foreign. But four years into the project, many repeat visitors are happy to see that their initial impression of the just-planted slope has been supplanted by a favorable view as the plants mature and the design becomes more visible. 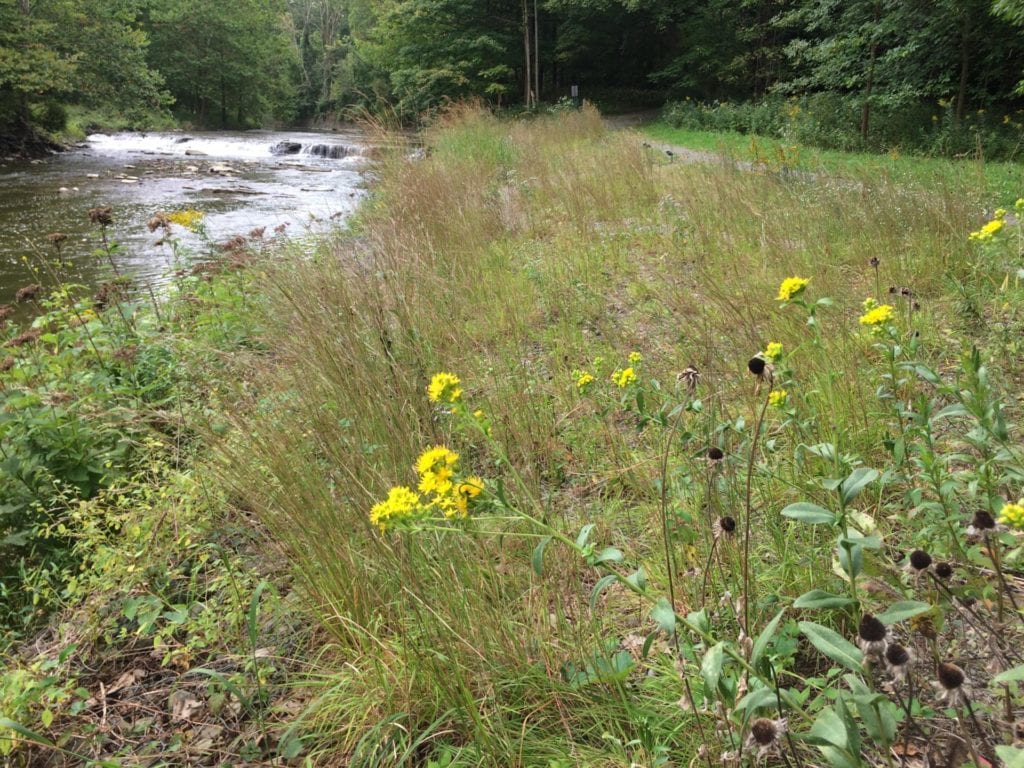 Now in its fifth growing season, I want to couple the gabion planting plan with a new idea! The gabion site was designed, seeded and planted with small-sized plugs (not large expensive plants) in 2015. This planting approach can be used on a smaller scale, especially for residential applications where instant effect is not required.

In particular, think of this gravel garden idea when you, or a client, are intending to install GEOTHERMAL heat pumps into your home or small business. I received four or five inquiries this past spring, exactly fitting this scenario: “Please help! My lawn is torn up; there is nothing I want more than to not reseed with turf. I want wildflowers; what can I do now?”

Unfortunately, those calls were a season and a half too late. Why not plan ahead for a native plant garden? The time to plan for a native habitat planting on the scale of a home lawn is at least a year and half before spring arrives and you are left with a muddy pit. 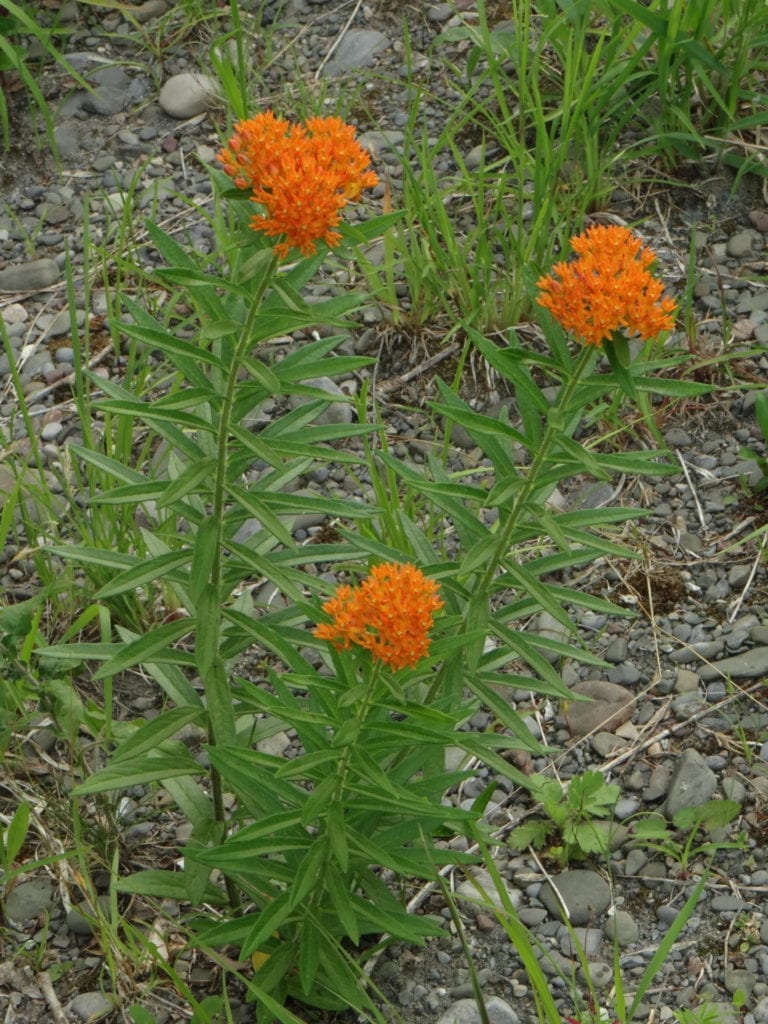 My personal and professional satisfaction with the gabions planting is easily expressed as delight and joy. My advice for installing a meadow project: Think positively and enjoy the process. Also make sure to use a systematic approach with these four essential elements: source local gravel, reference a local plant community, obtain permission to collect seeds, and create a small-scale propagation area in your home or business.

The four elements will be key to successful gardening if the northeast continues to receive, as predicted, more heavy rain events. Gravel gardens are more likely to thrive in a warmer, wetter climate since they provide plenty of drainage. It is my greatest hope for the future of native plants in the landscape that they be used in a way that represents native plant communities. A low nutrient, well drained site will provide a pathway for us to mimic the plant communities we cherish in the wild and desire in our gardens. We can create unique native plant displays that mature into prospering plant communities, supporting more diverse ecosystems. 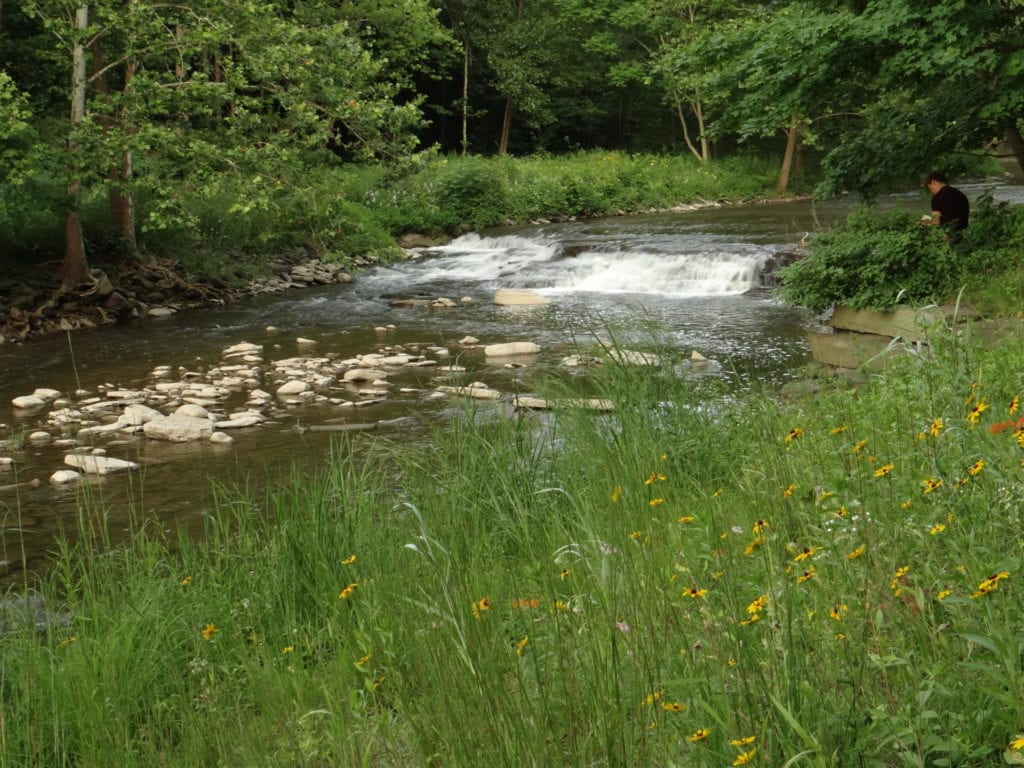 Krissy Boys has been a professional gardener for nearly 30 years. Her gardening career began with native plants at the Brandywine Conservancy and Brandywine River Museum in Chads Ford, PA.  F.M. Mooberry, the founder of the Brandywine Garden and of the Millersville Plant Conference, was Krissy’s supervisor and mentor in native plant gardening. Krissy has been managing the Mundy Wildflower Garden at Cornell Botanic Gardens for 20 years. From 1992 -1999 Krissy looked after the Comstock Knoll Rhododendron Collection, the Pounder Heritage Vegetable Crops and the Poisonous Plants Garden. She volunteered as a land steward for the Finger Lakes Land Trust from 1992-2011 and has been a steering committee member of the Finger Lakes Native Plant Society since 1998.