When Tony Reiber joined the faculty of Greenfield Community College (GCC) in western MA in 2012, he was almost immediately recruited to build out an outdoor learning lab – a garden location where students enrolled in a variety of natural science courses could learn from and engage with the space. He jumped at the opportunity to develop a campus wildflower meadow. 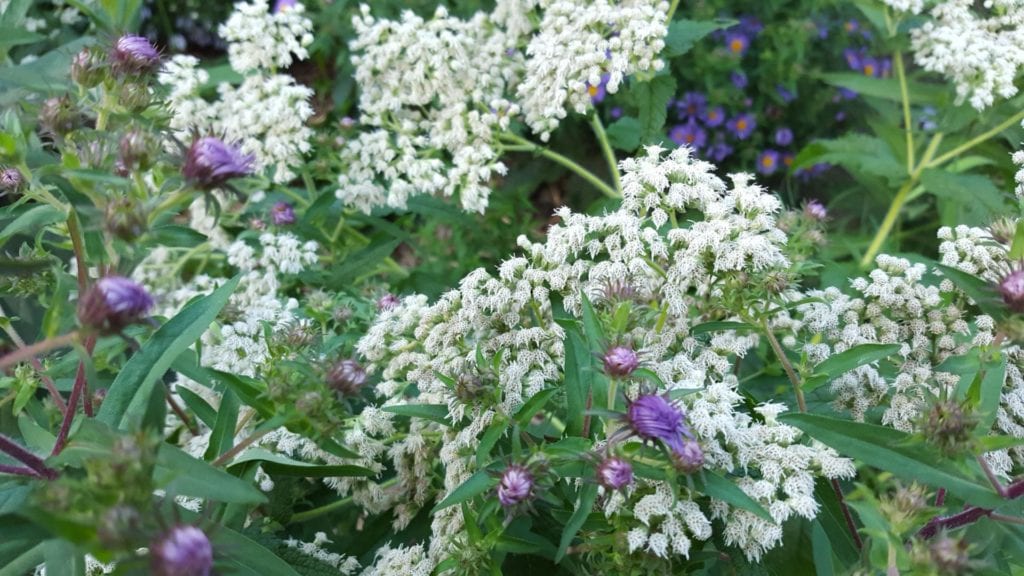 As part of a larger Outdoor Learning Lab, the wildflower meadow was envisioned as a space that would engage the entire Greenfield Community College community.

The Outdoor Learning Lab design was started in 2015, and the wildflower meadow was planned and designed in 2016, contingent on grant funding. The meadow would join an assemblage of outdoor spaces at GCC that includes a botanical garden, wetland garden, permaculture garden, and raingarden. The proposed site was a difficult one: roughly 10,000 square feet of east-facing sloped terrain planted with turf. The grass was difficult for facilities staff to maintain and uninteresting. 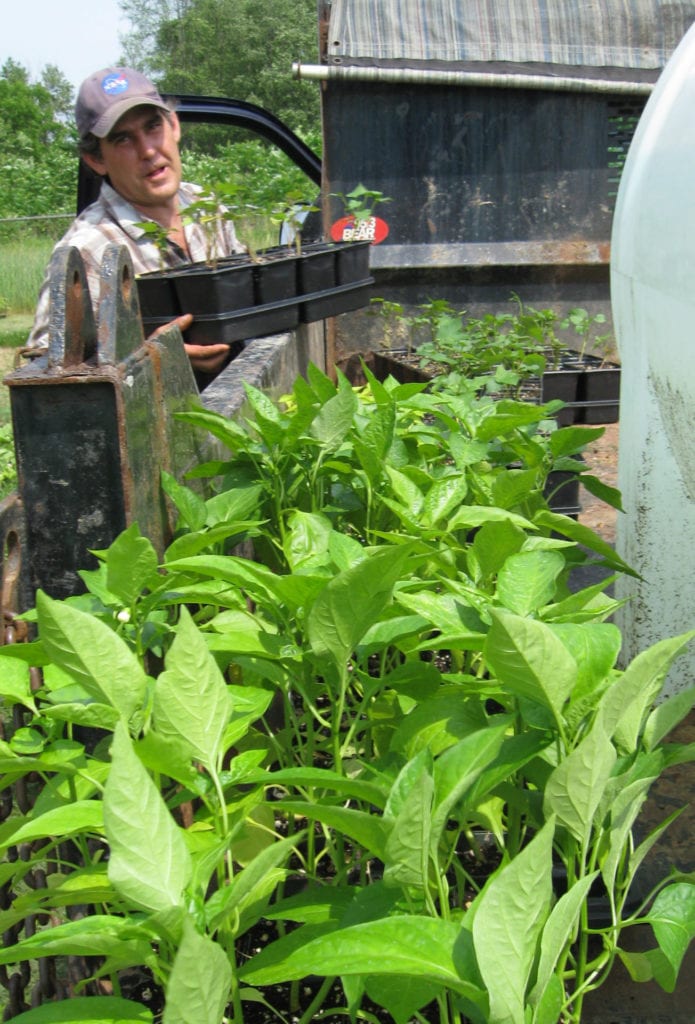 Planning for the meadow began in the fall of 2016 with Tony enlisting the help of Cayte McDonough, Nursery Production Manager at Nasami Farm in Whately, MA. Cayte had developed planting palettes that would produce meadow blooms from late spring into fall and would be successful in a myriad of growing conditions: full sun to full shade, rich to lean soil, dry to wet. Tony required a variety of plants that would accommodate the sloped site that was dry at the top and wet at the bottom.

The modified palette Cayte and Tony ultimately designed included 21 native plant species. Having worked as a grower for a number of years, Tony recognized that sowing wildflower seeds does not guarantee a meadow and that the mixed results can be discouraging. Rather than sowing seed into the meadow site, Tony instead utilized grant money from a National Science Foundation grant to purchase plug seedlings for the meadow project, which would maximize plant growth in the early stages and outcompete weeds on the site. Thirteen of the 21 targeted species were grown at Nasami Farm, and Tony grew six others in the GCC greenhouses he manages. 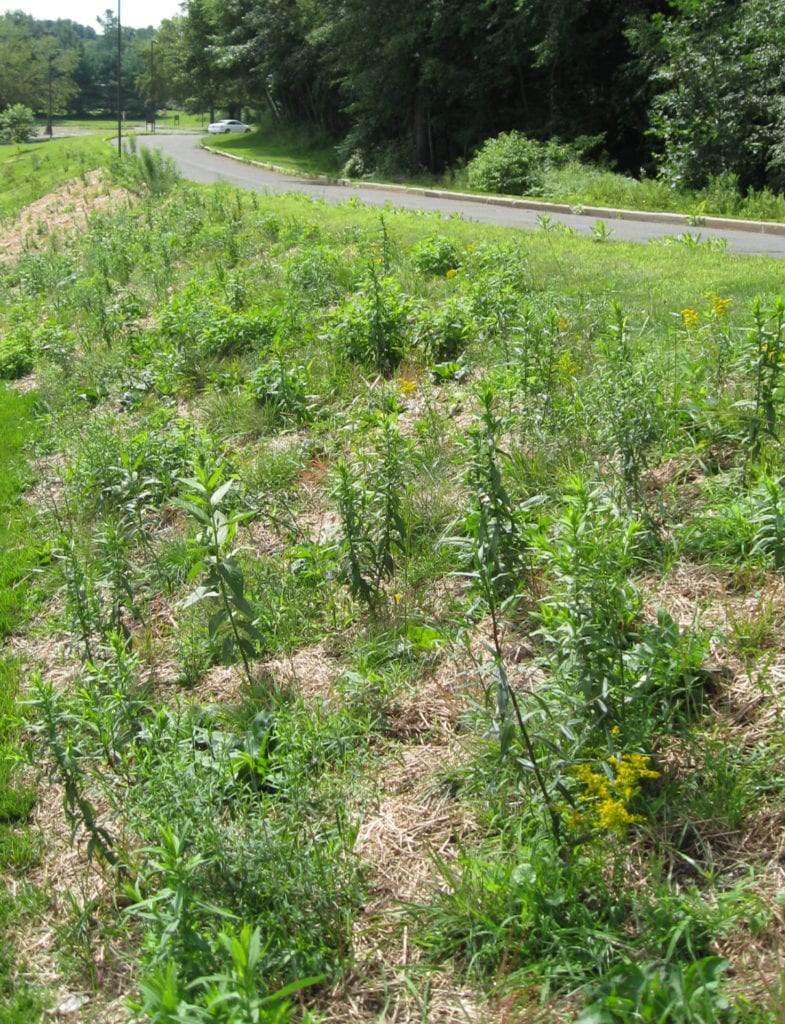 Before planting was to begin in the spring of 2017, the meadow site had to be prepared. Tony, who teaches soil science classes at GCC, conducted soil tests and amended the site with lime and organic fertilizers (bone meal, cottonseed meal and greensand). Trees had been cut nearby, and there was a lot of woody debris and some multiflora rose on the site that had to be removed. Students in Tony’s Permaculture Club helped sheet mulch the slope with a layer of cardboard and a layer of straw before winter. By the following spring, most of the grass and weeds on the site had died. The site was ready for planting. 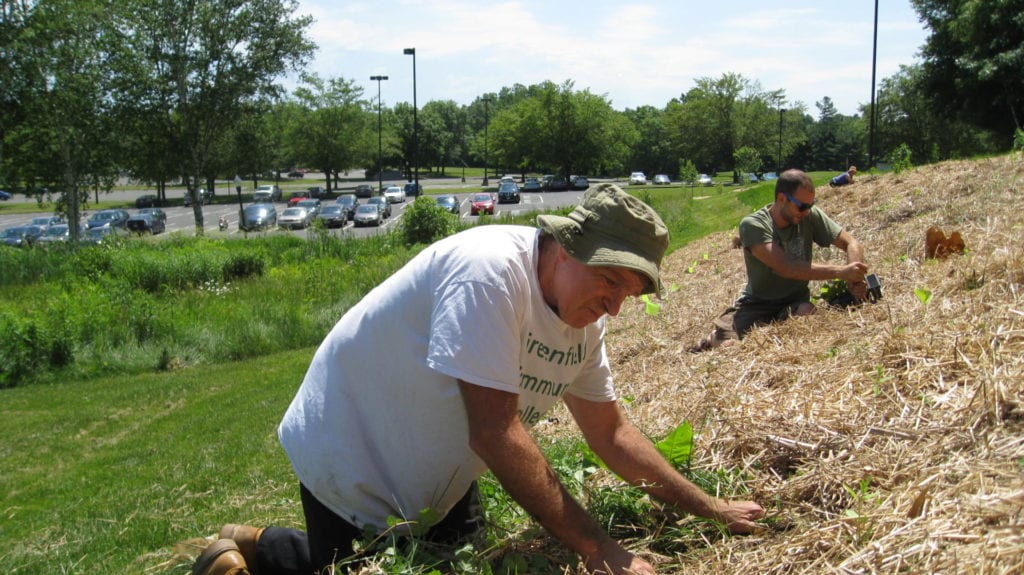 A team of student, staff, and faculty volunteers planted 2,200 plugs at the site of the future meadow.

In mid-June, a corps of students, staff, and faculty volunteers put 2,200 plugs in the ground, planting through what remained of the cardboard and straw covering. The team watered in all the plants and then relied on available rain for the rest of the season, with minimal losses.

All plants used in the meadow were of regional ecotypes and included a variety of grasses and forbs, identified in Tables 1 and 2. 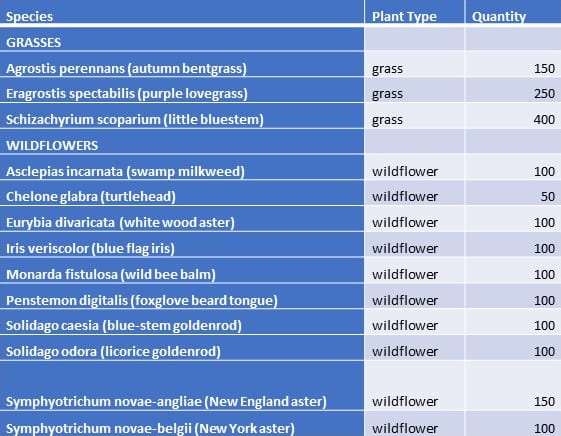 Table 1. Species for the meadow planting propagated at Nasami Farm 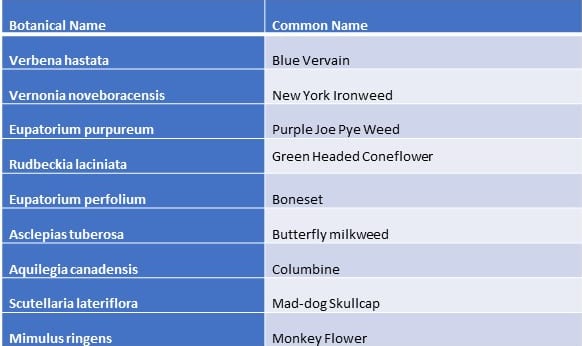 The meadow offered early rewards with asters blooming a year after the project began. By the spring of 2018, spring and mid-summer plants filled the meadow with color. And two years after planting, Tony noted that the summer bloom was spectacular. 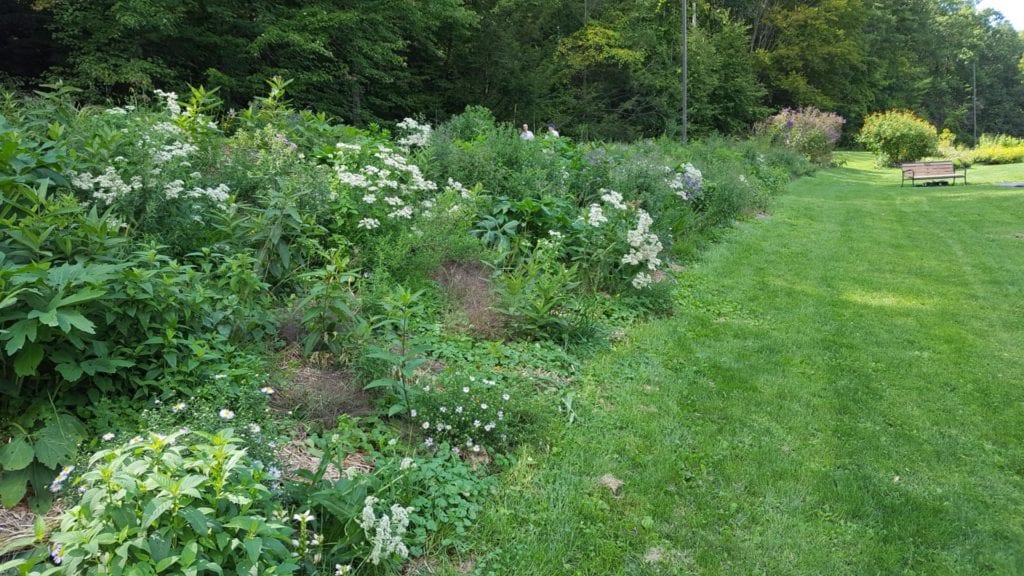 Eleven weeks after planting, the meadow is in bloom.

Learning from the Meadow

According to Tony, the meadow’s first year was the most difficult for maintenance and controlling weed species. Students helping maintain the meadow had to learn which grasses were desirable and which were weedy, a tough learning curve. Since then, ongoing maintenance at the site has been accomplished by students on work study programs and by student interns. These students work in the meadow over longer periods of time, allowing them to become familiar with the plants.

The meadow has led to other lessons learned as well. Specifically, about the species used in the meadow. Tony noted that he thought the ratio of wildflowers to grasses used for the project could be adjusted to favor grasses, which were slower to establish and could not compete. He hopes a future student research project will consider the best ratio of grasses to forbs for meadow establishment. 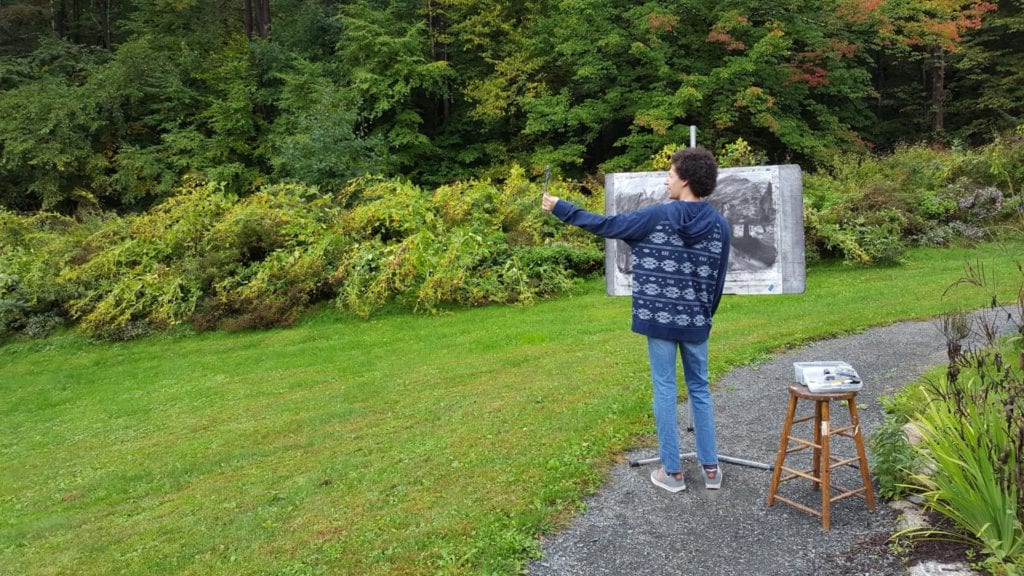 The Wildflower Meadow has engaged students across the academic spectrum.

In fact, the meadow has already been incorporated into several course curricula. First year ecology classes use the meadow for their “adopt a plot” experience. One student with an interest in pollinators collected data on the specific species present in the meadow, and art classes set up their easels there.

Tony strives to engage the greater community in the wildflower meadow as well and promotes it as a beautiful destination. Benches were added to the site along with signage that briefly describes the meadow project. This past summer, GCC hosted a native plant sale with divisions horticulture students took from meadow plants and grew from seed collected in the meadow. Tony’s goal is for visitors to go home not just with some native plants but with ideas for ecological changes they can make to their own yards. 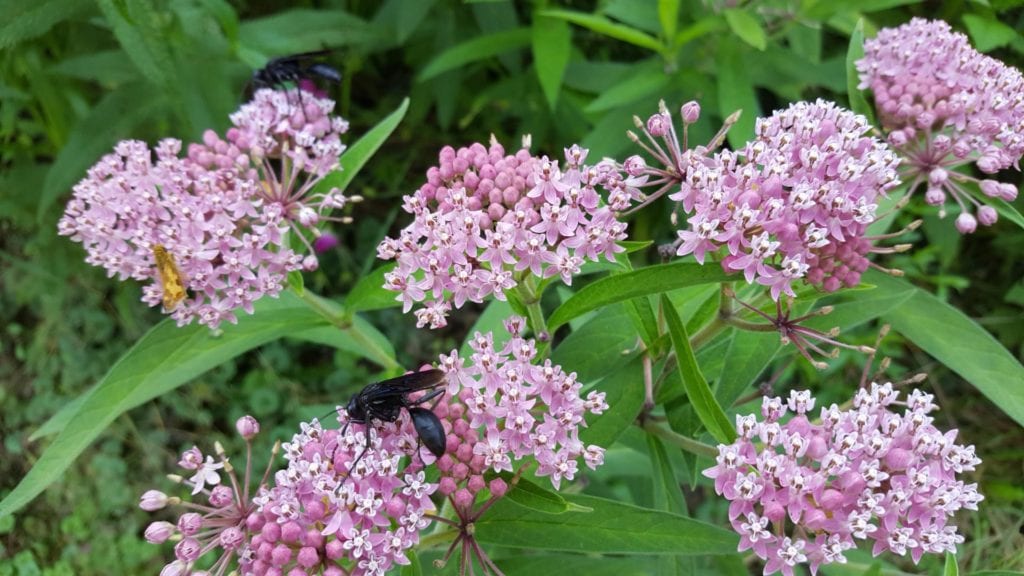 At a native plant sale this spring, GCC shared with visitors to campus both the bounty of the wildflower meadow and ideas for creating ecological landscapes at home.

Anthony Reiber is the Natural Resources Senior Special Programs Coordinator managing the Outdoor Learning Lab (OLL) which includes a passive solar greenhouse facility, native plant botanical garden, wildflower meadow, permaculture garden, vegetable beds, a wetland and a geology path at GCC. Tony is the coordinator for the Farm and Food Systems program and he also teaches soil science, horticulture, greenhouse management and organic gardening. He received an M.S.in Wetland Conservation from the University of Massachusetts and a B.S. in Plant and Soil Science from Southern Illinois University. His experience in greenhouse and nursery production with the New England Wildflower Society and New England Wetland Plants concentrated on producing native plant species specifically for habitat restoration and natural landscaping.

Maureen Sundberg edits the ELA Newsletter and writes from her home in the Merrimack Valley.