By ecopro on August 11, 2012 in Beneficials/Pollinators

Guidelines for Creating and Managing Habitat for America’s Declining Pollinators

This excerpt is reproduced, with permission, from Conserving Bumble Bees: Guidelines for Creating and Managing Habitat for America’s Declining Pollinators, published by the Xerces Society for Invertebrate Conservation, Portland, OR. For more information or to obtain a copy of the guidelines, please visit http://www.xerces.org/bumblebees/guidelines/.

The use of insecticides and herbicides is detrimental to a healthy community of pollinators. Insecticides by design kill insects, and herbicides reduce floral diversity. Although pesticide use on crops and rangelands is often the primary concern, they are also widely used on natural areas to control invasive species and on recreation sites and gardens. Indeed, the greatest pesticide use (measured as pounds of active ingredient applied per acre) takes place in urban and suburban landscapes. Homeowners have access to a wide array of pesticides with little regulation of their use, and few opportunities for education about the effects of these chemicals. 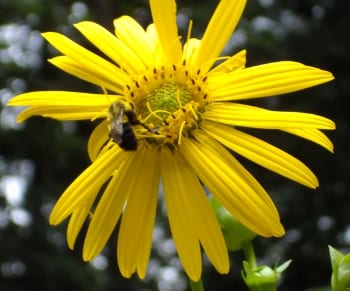 In general, while pesticide labels may list hazards to honey bees, potential dangers to native bees and other pollinators are often not listed, or even evaluated. (It is worth noting that home and garden products do not carry bee warning labels, even when they contain the same chemical used on farms.) Bee larvae can be negatively affected by consuming food contaminated with pesticides. Bumble bees are especially sensitive to die offs caused by pesticide use in the spring, the period when queens are founding colonies or colony sizes are small. Moreover, efforts to avoid contact with honey bees by spraying insecticides in the early morning may be especially harmful to bumble bees, as they are active in cooler temperatures and lower light situations.

Insecticides, although not specifically directed at pollinators, are created to kill target insects, and consequently, can have a wide range of toxicity to bumble bees. Insecticides are widely used on agricultural lands, yards and lawns, and in natural areas throughout the United States to control both native and nonnative species. In vast areas of rangelands, native grasshoppers are targeted with a variety of pesticides. In addition, overspray and drift of agricultural insecticides can affect non-target organisms in field borders. Insecticides not only kill pollinators, but sublethal doses can affect their foraging and nesting behaviors, lowering reproductive success, and in turn, often preventing pollination. Because of the wide range of toxicity, the impacts of insecticides may not be immediate; lethal or sublethal effects often manifest several hours or days later. Significantly, even pesticides approved for organic agriculture can harm bees. (For more information, see the Xerces Society’s fact sheet “Organic-Approved Pesticides,” available at http://www.xerces.org/wp-content/uploads/2009/12/xerces-organic-approved-pesticides-factsheet.pdf.) 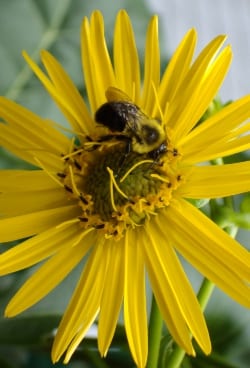 Of growing concern are systemic insecticides. These accumulate in the pollen or nectar of flowers, and thus are consumed by adult bees and brought back to the nest by foragers. This contaminated food can negatively impact developing larvae, or other adult members of the colony, reducing reproductive success. Studies have also shown that bees are particularly sensitive to neonicotinoid pesticides, even at low doses. The use of neonicotinoids has increased dramatically since the 1990s, and because many of the documented declines of pollinator populations in North America have taken place since that time, the role of these highly toxic pesticides has been suggested as a potential cause. A recent study showed a dramatic decline in bumble bee queen production with relatively low doses of a neonicotinoid.

Worldwide there are efforts calling for the ban of neonicotinoids because of their effect on bees; opinion articles, documentary films, and signature gathering campaigns are abundant in the U.S. and abroad. A recent summary of the effects of neonicotionoid use on bees released by the Xerces Society (Are Neonicotinoids Killing Bees? available from http://www.xerces.org/neonicotinoids-and-bees) lists important unanswered questions and research directions that will be important next steps. The report recommends that regulators reassess the bee safety of all neonicotinoid pesticide products, reexamine or suspend all conditional registrations until we understand how to manage risks, and require clear labels so that consumers know that these products kill bees and other pollinators. The report also recommends that the U.S. Environmental Protection Agency adopts a more cautious approach to approving new pesticides, and uses a comprehensive assessment that adequately addresses the risks to honey bees, bumble bees, and solitary bees in all life stages.

While herbicides do not directly target insects, their effects are felt by pollinating insects as herbicides remove floral resources and above-ground nesting sites, two essential habitat components. Just as pollinators can influence the vegetation community, changes in vegetation can impact pollinators. A pollinator community requires consistent sources of nectar, pollen, and nesting sites during those times that adults are active. The broadcast application of an herbicide can indiscriminately reduce floral resources, host plants, and/or nesting habitat. Such a reduction in resources can cause increased pollinator mortality. 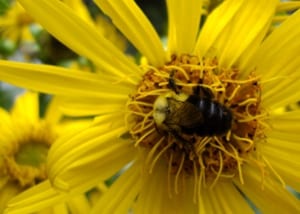 P.G. Kevan noted that herbicides reduced the abundance of flowers in the mint and sunflower families in regions of France and Belgium, contributing to a decline in bumble bee populations. Kevan also found that herbicide applications reduced the reproductive success of blueberry pollinators, including bumble bees, by limiting alternative food sources that can sustain the insects when blueberries are not in bloom. In contrast, Russell et al. and Forrester et al. found that the use of a selective herbicide combined with mechanical removal of shrubs and small trees was an effective method of maintaining power line corridors as pollinator habitat. In both studies, however, non-selective broadcast herbicides were destructive as they not only suppressed target plants, but important nectar resources as well.

To purchase the complete Guidelines, go to http://www.xerces.org/bumblebees/guidelines/.