By ecopro on August 11, 2013 in Landscape Maintenance, Pest Management

Public awareness of ticks and the pathogens they may carry has increased in the past 10 years. This article provides information specific to New England on tick species, their biology, and the pathogens they carry. Recommended integrated pest management (IPM) tactics are discussed including landscaping practices, the selection of plants to deter and resist deer browsing, and direct tick control recommendations.

Depending on species and pathogens, the following diseases could result from tick exposure: Lyme disease, babesiosis, ehrlichiosis, Rocky Mountain spotted fever, southern tick associated rash illness, and anaplasmosis. Of these, Lyme disease is the most noted in New England (Figure 2). Even within the region, the reported cases of Lyme disease varies widely by state (Figure 3). 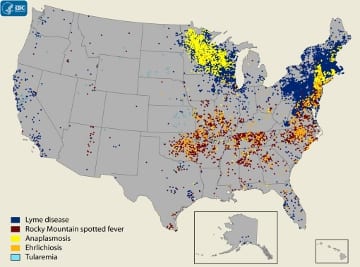 Figure 2. Distribution of tick-borne diseases in the U.S. Courtesy CDC 2013. 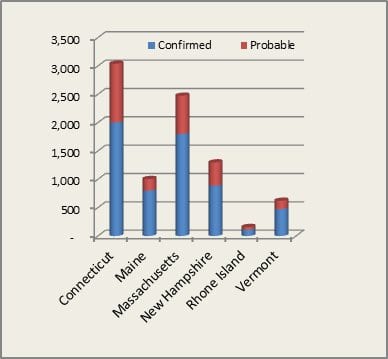 Climate
Ticks prefer cool, humid arboreal and deciduous forests. Some species, however, can adapt to arid habitats (Goodman 2005). Tick development is tied to temperature as their developmental phases shorten with increasing temperatures (Ogden 2006). Cold temperatures impact them less than many people realize. It is surprising to many to learn that 99% of all ticks will seek hosts once temperatures exceed four (4) degrees centigrade (or 39 degrees Fahrenheit). A New York study indicated that, regardless of winter conditions, more than 80% of ticks survived and that winter conditions do not necessarily restrict tick populations or, correspondingly, the risk from tick-borne diseases (Brunner et al., 2012).

Birds also act as a host for Ixodes damini (now described as Ixodes scapularis). For example, Battaly and Fish (1993) surveyed Westchester County, NY, and reported that 9% of the 25 bird species collected were parasitized by ticks. Both the American robin and house wren are reservoir competent for the Lyme disease spirochete, Borrelia burgdorferi, and therefore may contribute to the risk of Lyme disease for humans.

Deer are not affected by Borrelia burgdorferi, and do not transmit disease, but are hosts that allow infected ticks to multiply. This results in more ticks within a given area to transmit the disease to future hosts.

It could be assumed that controlling deer populations in an area in which ticks carrying disease pathogens are endemic would result in a reduction in risk for tick-borne diseases. However, other hosts may provide a means for ticks to migrate into an area with a depleted deer population. This theory was confirmed by a study conducted on Monhegan Island, ME. There, white-tailed deer were extirpated in 1999, but Ixodes scapularis ticks were discovered only three (3) years later, indicating a bird-derived reintroduction. (Elias, S.P., et al. 2011).

The life cycle of ticks is depicted in Figure 4. The immature tick (nymph) is the life stage of most concern because its small size (head of a pin) allows it to be easily overlooked during tick checks. 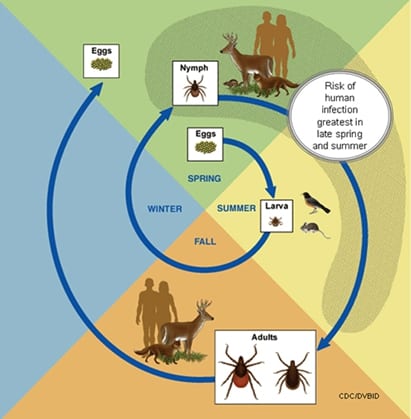 The following landscape practices are recommended as ways to reduce the exposure of you and your family to ticks. Figure 5 demonstrates how these practices can be integrated to create a backyard tick safe zone.

The selection of plants for a landscape can directly impact the attractiveness to deer. Deer demonstrate preferences and dislikes for certain plants just as humans prefer some foods over others. Those living near deer habitat can take advantage of this fact by using deer-resistant plants in their landscapes.

The following plants, identified as being resistant to deer browse damage (Ward 2000), can be grown where moderate browse damage would be expected. 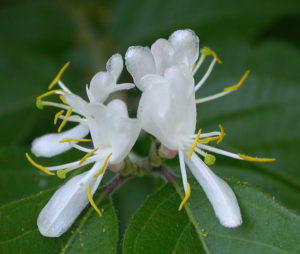 Figure 6. Lonicera maackii. Pairs of irregular flowers arising from leaf axils all along first year branches. Flowers are white, ¾ to 1 inch long, with a slender tube and 2 lips.  Removal of certain invasives, such as honeysuckle, has been associated with reduction in tick-borne disease.

Recent research indicates that invasive honeysuckle (Figure 6) eradication reduces tick-borne disease risk by altering host dynamics (Allan, B. et al., 2010). The data suggest that management of biological invasions may help ameliorate the burden of vector-borne diseases on human health. This study removal of honeysuckle and measured tick survival rates in invaded and restored habitats and it was reported there was a greater ten times greater chance for exposure to E. chaffeensis (pathogen carried by ticks) in honeysuckle plots compared to native vegetation.

The converse of plants that are not palatable to deer are those to which deer show a preference. The following plants were identified as being susceptible to deer browsing in a survey of Connecticut gardeners (Ward 2000).

The following recommendations are for use by those in the landscape community:

Landscape Worker Exposure
Ticks are usually more active in the months of April through October and peak in the summer months of June through August. The time of year when ticks are active may vary with the geographic region and climate. Outdoor workers should take care to protect themselves in the late spring and summer when immature ticks are most active (http://www.cdc.gov/niosh/topics/tick-borne).

Area Wide Treatment
A single springtime application of an acaracide (tick pesticide) can greatly reduce the number of ticks in your yard (CDC 2013). If you are considering applying an acaracide or having one applied to your property:

As noted by Sir Francis Bacon in his work Meditationes Sacrae, knowledge is power. This is particularly salient when it comes to mitigating exposure to tick-borne diseases. The provided information can help empower both landscape professionals and citizens to identify tick species as well as control variables often associated with tick propagation. With that, may citizens be emboldened to enjoy outdoor environments – wherever the path may lead.

Candace Brassard is a as Senior Biologist with the U.S. Environmental Protection Agency’s Office of Pesticide where she is responsible for tick Integrated Pest Management efforts. Ms. Brassard has a bachelor’s degree in Animal Science with a minor in Zoology from UMass Amherst and a master’s degree in Environmental Public Policy from George Washington University. The past 10 years of her 25+ year career with EPA has focused on tick IPM and the evaluation of efficacy data for tick control methods. She may be reached at 703-305-6598 or brassard.candace@epa.gov.