By Maureen Sundberg on August 16, 2017 in Pest Management

In the early 1990s New England acquired a new pest of lilies from Europe, the lily leaf beetle (Lilioceris lilii), which made growing lilies to their full potential almost impossible. The adult is a beautiful red beetle, but the immature stage is a larva that can defoliate lily leaves and has the nasty habit of protecting itself with its own fecal material, which makes the plants look very unattractive. As gardeners in New England encountered this pest in their gardens they began to give up hope of winning the battle for their lilies and many pulled the bulbs out of the ground, and simply stopped growing lilies. 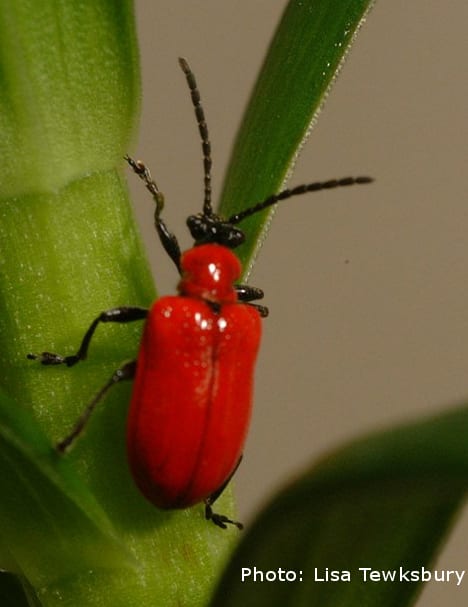 Search for a Biological Control Agent

In 1994, Sayles Livington, a graduate student in the URI biological control lab under professor Dick Casagrande, began to investigate a possible biological control agent for the lily leaf beetle. This involved researching the insects that keep the beetle under control in Europe, and if the research determined these insects to be safe and effective, they would be brought to North America. As a graduate student, Dr. Casagrande had worked on a successful biological control project with a related pest, the cereal leaf beetle, and saw potential in this project. Over the intervening years, there were two additional students who worked on this project, Marion Gold and myself. There were also many other collaborators over the years, including many funding sources, a research group in Switzerland (CABI), and many New England gardeners, eager to help bring lilies back. 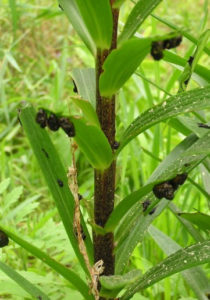 Leaf damage and globs of excrement are sure signs of lily leaf beetle activity.

Release and Monitoring of Biocontrol Agents

Three species of small parasitic wasps were identified by CABI scientists in Europe as combining forces to manage the lily leaf beetle populations in Europe, and all were included in Marion Gold’s dissertation research to determine that there were no native insects that would be impacted if the parasitoids were introduced into North America. This was found to be the case, and after approval by the USDA, all three parasitoids were introduced into North America. The first releases were in Massachusetts, where the beetle was first found, and Rhode Island, New Hampshire, and Maine soon followed. The release and evaluation of lily leaf beetle parasitoids became the subject of my dissertation research. 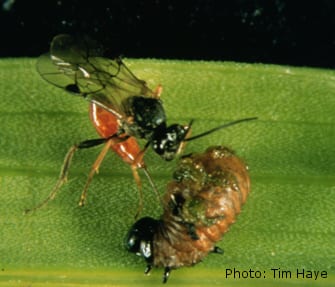 All three parasitic wasps lay eggs in the larvae of the lily leaf beetle. The larvae eventually die as the parasitoid larvae mature inside the beetle larvae. The parasitoid species vary slightly in their geographic ranges in Europe, and in our releases we have been trying to match the climate range of the European parasitoid with the climate of the release site in New England. The parasitoid Lemophagus errabundus is now established in Massachusetts and Rhode Island; the parasitoids Tetrastichus setifer and Diaparsis jucunda are established in Massachusetts, Rhode Island, New Hampshire and Maine, and Tetrastichus setifer is also established in Connecticut and Ontario, Canada. 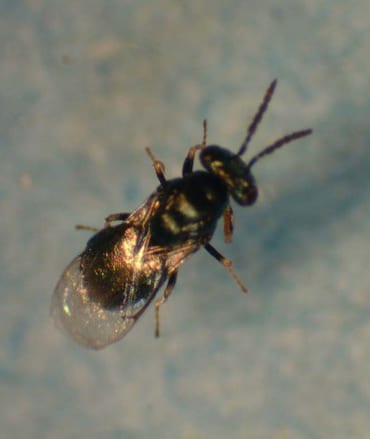 Populations of Tetrastichus setifer (adult shown here) have established throughout most of New England and in Ontario, Canada. Photo: Lisa Tewksbury

We are continuing to collect larvae from gardeners. Many send us larvae to evaluate for parasitism which allows us to monitor the spread of the parasitoids (http://web.uri.edu/biocontrol/). We also track the spread of the lily leaf beetle. Currently, the lily leaf beetle distribution includes Washington State, Wisconsin, Michigan, and Iowa, as well as Pennsylvania, New York, and all New England states. It also includes much of Canada. You may find the map at http://lilybeetletracker.weebly.com/map.html.  Other states are now beginning programs in biological control of the lily leaf beetle.

Can You Grow Lilies Again?

Achieving establishment of these parasitoids in New England is a good first start, but what about actually having an impact on the pest? There is good evidence that the parasitoids are having an impact on the lily leaf beetle in Massachusetts and Rhode Island. In our first release plot in Massachusetts, we took a site from having complete defoliation of lilies, to having no lily leaf beetles at all. In addition, over the years we have received correspondence from cooperators that their previously infested lilies are now beetle free. They are back to planting and enjoying lilies. So while we are still collecting data and will continue to provide updates on our website, I contend that yes, there is hope for gardeners who plant and grow lilies in New England!

Lisa Tewksbury is a Research Associate in the Department of Plant Sciences and Entomology at The University of Rhode Island and manages the URI Biological Control Lab.