By ecopro on August 11, 2012 in Landscape Maintenance, Pest Management

Beware of the Fine Print 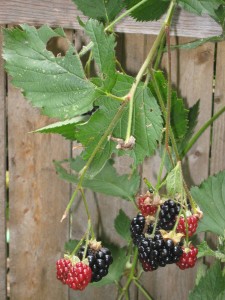 It comes as no surprise to ELA Newsletter readers that edible landscapes and ecological pest control are both on the rise. Taking nature’s lead, more gardeners and farmers are exploring creative solutions beyond drowning slugs or handpicking potato beetles to solve pest problems. In recent years, free range chickens have been welcomed into ornamental and edible landscapes where they assisted with pest control but often damaged the plant material they were tasked with protecting – and they were noisy, very noisy. There had to be a better solution. Enter the adorable ducks.

The Benefits of Ducks

Ducks are attractive and valuable additions to a farm, homestead, or landscape. They require less care than chickens, are less susceptible to disease, and can provide meat and eggs in addition to foraging for slugs, snails, grubs, mosquito larvae, damaging beetles, grasshoppers, and many more insect pests. Foraging provides free food for the ducks while controlling insects in the landscape.

There are many breeds of ducks raised by hobbyists in the United States. Various breeds are favored for specific traits including: personality and temperament, appearance, egg and meat production, mothering, size, noise, heritage, as well as foraging ability. With a bit of research at local libraries or on the internet, it is fairly easy to fulfill your priorities with the appropriate breed of duck. 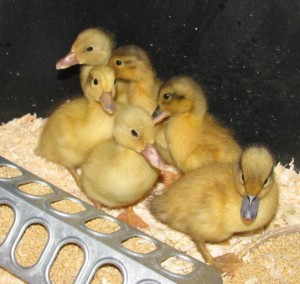 With three priorities in mind – the promise of strong foraging, excellent egg production, and desirable meat all in one season – I began my investigation of ducks in the landscape. After a winter of research (including interviews with experienced duck farmers), the duck adventure began in April with the arrival of two Buff Orpington ducks, two Welch Harlequin ducks, and two Welsh Harlequin drakes. For small quantities, mail ordering ducks from a reputable breeder avoids the equipment investment, time, and stress required to hatch your own ducklings. 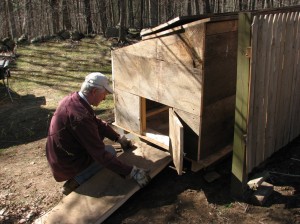 With the relatively inexpensive purchase of a few pieces of equipment and the investment of a few days and some salvaged lumber to build a predator-safe duck house, my husband and I added ducks to our ecological landscape plan.

A minor hitch occurred early in the adventure when the ducklings outgrew the brooder box located in the garage two weeks before the planned move to the outside duck house. Ducklings transform from palm-sized yellow feather balls to “ducks” very quickly! 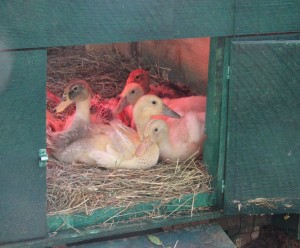 Growing Into Their Role

Growth rates were surprisingly fast, vocalizations changed frequently, and plumage became more dramatic as each week passed. The ducks’ comical behaviors brought animation to the landscape and attracted the interest of the neighborhood, providing many opportunities to discuss the benefits of ecological pest control.
So far, so good. 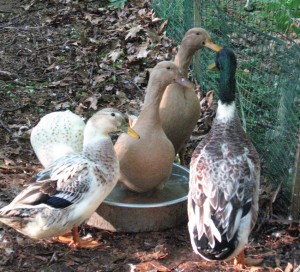 Because a busy road adjoins our property, fencing was a necessity. The breeds I selected, Buff Orpingtons and Welch Harlequins, have limited flight abilities and could be easily contained with 3’ fencing.

The vegetable garden was to be the ultimate focus for pest 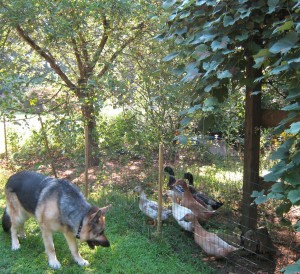 control in the landscape, but the literature is clear that tiny seedlings are at risk. The initial duck yard fenced in an area that included fruit trees, a grape arbor, native perennial garden, and dense shrub plantings that provided both shade and protection from aerial predators. 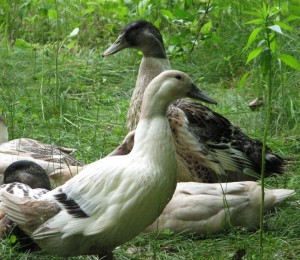 The next four weeks were delightful. Ducks are cute and engender the landscape with a comical narrative from dawn to dusk. Caring for the flock proved to be less work than anticipated, organic duck feed was more readily available, and now full grown, the ducks were more comfortable out in the open.

You know it’s coming. The “But …” is about to enter this saga.

By the third week of July, the vegetable garden was mature enough to introduce the ducks, now 11 weeks old. The record-breaking heat and a few well-timed thunderstorms had produced a lush garden, bursting with buds, blossoms, early beans, and lots of potential.

Early one Saturday morning, we brought out two more rolls of 50’ fencing, and two hours later the duck yard had been reconfigured to include the vegetable garden.

Within minutes of releasing the ducks, they began to explore their new territory. Ahead of them stretched rows of green and yellow beans, deeply hilled potatoes, dozens of tomatoes bursting with green delights-in-the-making, beets, arugula, kale, tomatillos, squash, onions and my personal favorite, six varieties of yellow-blossom bejeweled cucumbers.

Tentative at first, the curious investigators soon discovered cucumber and potato beetles, and the soft coos and clucks turned to loud and rowdy honks and quacks. It was gratifying to witness the enthusiastic foraging behavior that came so naturally to the ducks. Filled with confidence that the ducks were successfully foraging for their breakfasts, I headed to the kitchen to forage for my own.

By Saturday evening, a mere six hours later, the narrative of this story took a dramatic turn.

Despite carefully designed planting in the vegetable garden, ducks have little regard for planned human foot paths. Though considered mid-weight, our 5 – 7 lb ducks proved heavy-weight for the crops. The first to succumb were my long-awaited cucumbers. Vine after vine was trampled and withered quickly under the stress. 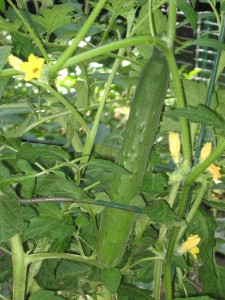 By Sunday, it became clear that the cucumber crop was ruined, and I planted a small patch outside of the duck fencing. One lone cucumber vine survived, saved by its serendipitous location next to a tomato cage, allowing the vine to climb up and away from the marauding flock.

Since most other crops were off the ground in tall, strong rows, I believed (naively) that the damage would be isolated to the cucumber crop.

Now two weeks after the ducks entered the vegetable garden, I stroll through the remnants of my former garden, and in every direction there is evidence of the ducks – and not in a good way.

The description that you are about to read may be an aberration in the annals of foraging ducks, and may only be some “perfect storm” of conditions occurring in my landscape, with these particular ducks, during this particular season. But here is the rest of the story. Unlike the descriptions of foraging ducks (perhaps viewed through rose-colored glasses?) that encouraged me to embark on this adventure, the description of the ducks providing pest control in my landscape is more blue than rose. 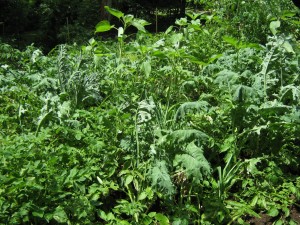 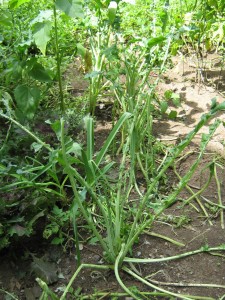 To be fair, the duck foraging was quite effective against a wide range of insect pests. 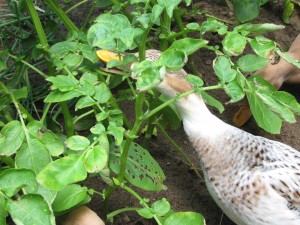 This included crawling insects on plants and on the ground, some flying insects, and with determined rooting, many grubs beneath the soil surface. 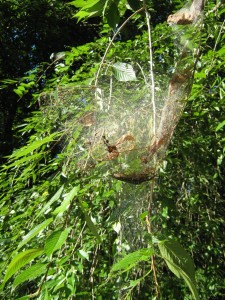 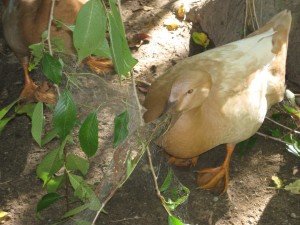 Though the ducks could not reach the web worms high overhead, they voraciously dispatched the wriggling mass when I pruned the branch and placed it within reach. And I fully expect that the insect population next year will be reduced thanks to their efforts this season.

My complaints, therefore, are not with insect control but with the collateral damage afflicted on plant material in the process. The damaging behaviors generally fell into one of three categories: appetite for more than insects; knocking over and damaging crops; and trampling vining crops. 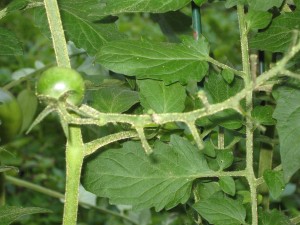 The appetite of these ducks has been nothing short of remarkable. Unlike a finicky toddler, these guys and gals found little that they disliked at our vegetable buffet. With no preference for ripe tomatoes, the ducks stripped a cluster of green cherry tomatoes – long before the heirloom variety sported its orange glow. I actually witnessed one of the drakes jumping repeatedly to reach a single remaining cherry tomato. 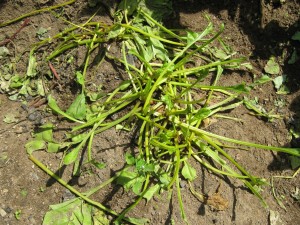 Beet greens from these golden beets were an early delicacy for the flock as were the leafy greens of celery and cilantro. 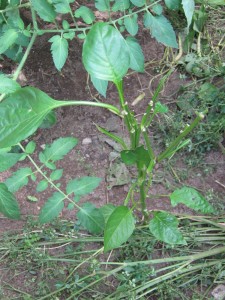 But greens did not have to be traditional salad fare to appeal to these ducks. Onion tops and pepper plants were also favored by our feathered friends.

In their zeal to forage, the ducks first knocked over and trampled the cucumbers but quickly moved on to other crops. 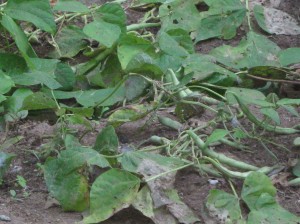 Even deeply hilled green beans were no match for the eager flock. 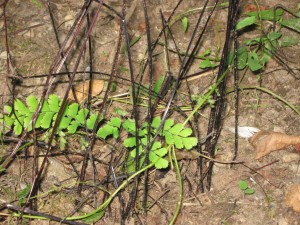 Lest you think that this flock only inflicted damage on edible plants, be warned that plenty of harm was found on ornamentals as well. A few unhappy sticks are all that remain of a once flourishing Maidenhair Fern. 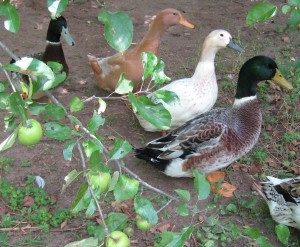 The ducks have been an adventure and have brought many laughs, an amusing soundtrack, as well as organic feathers and manure to our landscape. If the only items on the score card were effective insect control and entertainment in the landscape, without hesitation I would award an “A” on both counts.

Though these are both important aspects of ducks in the landscape, there are so many other considerations. For me, a high priority is to “do no harm” while performing insect control. As amusing as they are, and as much as I have enjoyed them, the plant damage caused by our ducks simply cannot be ignored.

I can’t help but wonder why so many resources on ducks in the landscape begin with quotes such as: “If you are considering adding ducks to your landscape you will be making a wise choice …”? Is this a ruse on the part of other duck owners? A whopping practical joke?

We live in the northern US with long, cold winters. In order to experiment with ducks in the landscape, the bargain that I had to strike with my husband was that the ducks would go into the freezer before winter set in.

As the vegetable garden toll mounts, I have been reminded many times that these are well-fed, organic ducks and that they are going to taste delicious. 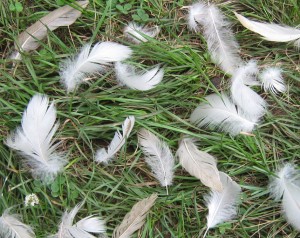 In the big picture of the edible landscape, I am sure that my husband is right.

But as the days shorten, I regret becoming so attached to my feathered foragers.

Penny Lewis is ELA’s Executive Director. When not scouring her vegetable garden for duck damage, she can be found organizing Eco-tours, Roundtables, the 2013 Conference, and other educational initiatives for ELA. She and Richard, her husband, use ecological practices to maintain their property in NH. Penny may be reached at ela.info@comcast.net.

Landscaping for Butterflies and Other Pollinators: Exotics can be Useful
You Calling Me a Purist?