Summer evenings in many parts of New England are missing something this year – the swoop of a bat over yards at dusk. Though some might rejoice at a local reduction in the bat population, particularly if the population resides in one’s attic, the loss of millions of bats since 2006 comes with a price tag. Reduced numbers of these incredibly efficient insect predators leaves growers with one fewer ecological tools for natural pest control.

Man has long been intrigued by bats. They appear in popular culture in the forms of Dracula and Batman and are a staple of Halloween terror. But now North American bats are achieving unfortunate notoriety as species in decline. The source of the bats’ devastating decline is White-nose Syndrome (WNS). WNS affects hibernating bats, and because more than half of the 45 bat species in the United States hibernate, huge numbers of bats could eventually acquire the disease. Seven species are already endangered.

Bats affected by White-nose Syndrome exhibit a fuzzy white fungus on their muzzles and other parts of their bodies.

White-nose Syndrome is deadly – sometimes killing over 90% of a cave’s bat population. As of March of this year, the U.S. and Wildlife Service estimated that over 5.5 million bats have succumbed to the disease. Bats affected by WNS acquire a characteristic white fungus that appears primarily on their muzzles, but also on their wings and other body parts, and they exhibit unusual behavior during the cold winter months. They might wake during their normal period of hibernation and fly from their cave or they may cluster near the colder entrances of their hibernacula (the caves and mines in which bats hibernate for the winter). Waking during a time when no insects are available, or requiring more energy to keep warm in a colder part of a cave, stretches the bat’s fat reserves and make it less likely the animal will survive the winter.

Bats were first identified with WNS New York state during the winter of 2006 – 2007. Over the next four years, WNS spread through the northeastern states and into the Appalachians. By the winter of 2010 – 2011, WNS had been identified in bats in 19 states and four Canadian provinces and a newly discovered fungus associated with the disease, Geomyces destructans, had been found in two additional states. And the disease is expected to continue spreading. 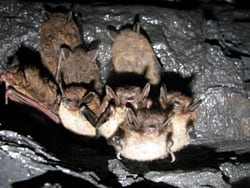 Bats hibernating in caves easily spread WNS to each other.

Because bats are social creatures and hibernate in large, tightly packed groups in caves, the fungus is easily transmitted from bat to bat. But researchers also suspect that WNS is being transmitted by humans who inadvertently carry the fungus from cave to cave on their clothing or gear. Some states have restricted cave access in an attempt to limit the spread of WNS, others have established protocols for disinfecting clothing and equipment to avoid spreading the disease from a possibly infected cave to an unaffected cave.

Why Care about Bats?

Why is the decline of bats of concern? Bats play an important role in local ecosystems by reducing populations of some insect pests. Seventy percent of bats worldwide are insectivores, and many consume sixty percent of their body weight in insects every night and pregnant females may consume more than one hundred percent of their body weight daily. Bats are the main predator of beetles and moths during the nighttime hours.

As bat populations decline, fewer bats will mean more mosquitoes, aphids, corn earworm, cotton bollworm, and an array of other pests. Millions of bugs will go unconsumed and result in increased expenditures on pest control services in various horticultural sectors each year. Estimates vary considerably, but could amount to a loss of over a billion dollars each year. The estimate includes loss of crop and the cost of additional insecticide applications, as well as the loss of social and environmental cost savings realized by the reduced use of insecticides when bats are present. 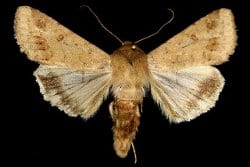 Though scientists are still determining how to best protect bats from WMS, other human factors also have detrimental effects on bats. Pollution, habitat loss due to land conversion, and disturbance at roosting sites, whether cave or abandoned building, all adversely affect bats. Awareness of bats’ contributions to sustainable land care is a first step toward ensuring the continued presence of the creature’s swooping nighttime flights over yards and fields.

For additional information about bats and White-nose Syndrome, try the following websites:

Maureen Sundberg edits the ELA Newsletter. She writes and follows ecological landscape practices at her home in Andover, Ma, where she has not seen any bats this summer.