By Maureen Sundberg on August 16, 2017 in Invasive Plants

Maine has become the latest state to ban the sale of exotic invasive plants Burning Bush (Euonymus alatus) and Japanese Barberry (Berberis thunbergii), both long-time staple plants of the landscaping industry that have seeded and spread aggressively into natural and agricultural areas in eastern USA. But are you aware of USDA-sponsored research at the University of Connecticut to develop sterile varieties of these plants?

Sounds like a good idea, right? After all, if the plant is sterile – in other words, it doesn’t produce viable seeds – it can be safely planted without risk of its seeds being spread by birds (or wind) into other areas. 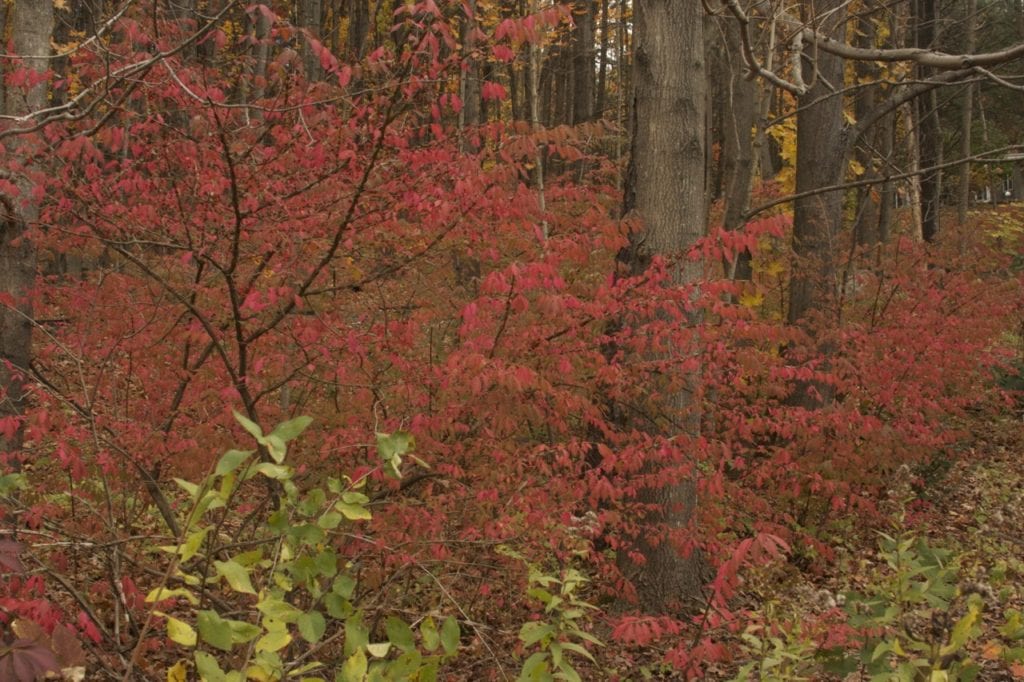 But history shows that this hasn’t worked well for other ornamental invasive plants. Cultivars of the invasive Purple Loosestrife ‘Dropmore Purple’ and ‘Morden’s Pink’ were considered safe for planting because they cannot self-pollinate to produce seed (they are sterile through self-incompatibility). However, these cultivars still happily cross-pollinate with the wild species, producing millions of fertile seeds, contributing even further to this plant’s spread through the landscape.

Other plants marketed as sterile, including Bradford/Callery Pear (Pyrus calleryana), are quite capable of cross-pollinating with nearby ﬂowering pears — Callery Pear is now reported as an invasive plant from the Great Lakes south to the Gulf Coast.

The UConn project developed a Burning Bush that is incapable of producing viable seeds, even with cross-pollination, through technology similar to the development of seedless watermelons.  A 10-year test period is still in progress to conﬁrm that they cannot revert to fertility. Whatever the results, introducing sterile cultivars of invasive plants is not the solution to reducing the damage caused by invasive species. Those runaway horses left the barn years ago, and our unmanaged woodlands are now overrun with them.

The environmental problems caused by invasive plants spreading from home landscapes is well-known, at least by governmental agencies and ecologists, if not by many consumers. Both burning bush and barberry have signiﬁcant negative impacts on natural systems when they grow where they don’t belong.

Where Japanese barberry has taken over woodland areas, studies show the plants alter the soil chemistry (pH) and increase nitrate levels, making the soil inhospitable to existing woodland trees and understory plants, which eventually decline along with the associated wildlife that depend on them. Barberry spreading through a central MA woodland, originated from nearby residential plantings. So why do we want to continue the heavy reliance on these plants in the nursery trade? Why invest all the energy and tax dollars into development of plants that shouldn’t be growing here in the ﬁrst place? Simply put, it’s about money.

The presence of barberry is also being linked with high rates of Lyme Disease, a horrible disease now approaching epidemic levels in the northeast. Barberry’s thorny foliage provides safe cover for white mice and small rodents, who researchers from the Cary Institute for Ecosystem Studies believe are the top apex of the Lyme Disease pathogen, more so even than deer.

Burning bush sales topped $38 million nationwide in 2010, and plant breeders will tell you that consumers ask for this plant and there is real demand. People see plants growing in their area, and they generally want to buy what they are familiar with. But I’m willing to bet that most consumers are willing to take this advice: “Barberry is a bad choice for the environment. Plant THIS instead.” In my own experience as a garden coach, I have only had one client in 10 years that did not choose to remove their burning bushes after I explained their impact on our natural ecosystems. I believe that landscaping professionals have great power to inﬂuence landscaping trends, and we have a responsibility to educate consumers about the consequences of their landscaping choices. Not all states consider invasive plants as a legislative priority at the moment, but local landscaping and nursery organizations seem to be picking up the slack. The CT Landscape & Nursery Association has implemented a voluntary phase-out of the use of invasive Japanese barberry cultivars (but unfortunately not burning bush), and hopefully other green industry organizations will follow suit.

It also appears that our federal agencies need to re-evaluate where they are devoting their energy. The USDA web site proudly announced that sterile barberry cultivars should be available for sale within a decade. OK, but in that decade, our remaining intact natural support systems are increasingly degraded by the continuing presence of invasives in home and public landscapes. We need to persuade our governmental agencies to re-allocate resources to cultivating and restoring native plant populations in our natural and developed areas, not pandering to landscaping trends.

So, for gardeners looking for alternatives to burning bush and invasive barberry, what can they plant that offers the same ornamental characteristics without damaging the environment? The US native Eastern Wahoo (Euonymus atropurpureus) has the blazing red color of its foreign cousin the Burning Bush without its invasive tendencies. Other eastern native shrubs with ﬁery fall foliage are Virginia Sweetspire (Itea virginica), Dwarf Fothergilla (Fothergilla gardenii), or Highbush Blueberry (Vaccinium corymbosum). Attractive native shrubs such as Ninebark (Physocarpus opulifolius) or Spicebush (Lindera benzoin) feed pollinators and birds without damaging local ecosystems.

This is a reprint of an article posted originally on 3/2012 at Native Plants and Wildlife Gardens.

Ellen W. Sousa owns Turkey Hill Brook Farm, a native plant nursery and habitat farm in Spencer, Massachusetts and is the author of The Green Garden: A New England Guide to Planning, Planting & Maintaining the Eco-friendly Habitat Garden. She provides coaching and design services to clients to guide them in the design and construction of landscapes that support pollinators and biodiversity. Ms. Sousa is also an overseer and instructor for New England Wild Flower Society.