By ecopro on August 11, 2013 in Invasive Plants, Pest Management

Richard Casagrande, Professor of Entomology at the University of Rhode Island lectured on August 2, 2012 at Massachusetts Horticulture Society on “Biological Control of Invasives.” He covered the efforts underway by scientists in the Northeast to use biological methods to control invasive plants and insects so that chemical pesticides and herbicides do not have to be used. Professor Casagrande provided a research update in August 2013.

We all know how devastating infestations of kudzu, woolly adelgid, Japanese knotweed, phragmites, and many other non-native pests are to our environment. There are a number of institutions that are working on developing biological controls of invasives. CABI, located in Switzerland, conducts this type of research internationally. In the Northeast, Cornell University, the University of Massachusetts, and the University of Rhode Island conduct much of this research, but many other state Agriculture Experiment Stations and colleges are involved. Over the past 100 years, over 200 pest problems have been solved worldwide via the use of biological controls.

The process of identifying an effective control agent usually starts by investigating natural predators of the invasive species in its original home territory. For example, Japanese knotweed is not invasive in Japan, so CABI looked at what keeps it under control there. An insect known as a psyllid was identified. These insects were then subjected to many years of testing to make sure they are “species specific,” i.e. if released, they will only kill the desired pest and will not themselves become invasive or damage non-target plants/insects. Such an insect was tested and released in the UK two years ago and USDA is now being petitioned for permission to release it in the United States. Professor Casagrande expects that within two years the U.S. should be starting to use this biologic agent. That is great news! 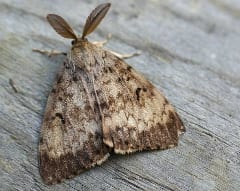 Sometimes nature alone serves up a biologic control that reduces a pest, as is the case with the gypsy moth, which caused major problems in MA in the early 1980s. In 1989, a fungus from Japan showed up in Boston and spread over the next few years throughout the Northeast/Mid-Atlantic range of the Gypsy Moth, suppressing it ever since. The fungus is less effective during localized droughts.

Most of us are familiar with the recent purple loosestrife story in MA. From 120 possible insects that eat loosestrife in Europe, 14 host-specific ones were identified, and six (6) of those were extensively tested. Four species have been released throughout the northern US and southern Canada, and they are substantially reducing this invasive plant.

Many of us no longer plant Asiatic and Oriental lilies, due to the devastation caused by the bright red lily leaf beetle. It arrived in Montreal from Europe in the 1940s and showed up in Boston in 1992. Three species of European wasps have been released in New England by URI entomologists for biologic control of this pest. Many sites have experienced localized control, but because lilies are not extensively planted, it is hard to support a robust wasp population and the wasps are spreading slowly. Current research focuses on whether mulching and cultivating around lily plants kills the overwintering wasps.

Control of Birch leafminer is a total success story! Accidentally brought to the US from Europe in the 1920s, it was ubiquitous in the Northeast until the early 1990s. A European parasite released at that time has essentially eradicated this pest. 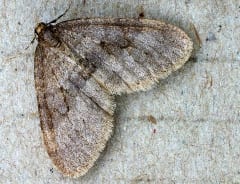 And, there is good news about winter moth, which defoliates selected trees in springtime. According to Dr. Joseph Elkinton of UMASS Amherst, a parasitoid fly that is controlling the moth in Nova Scotia and the Pacific Northwest has recently been released in Massachusetts and is becoming established. It is hoped that it will provide control within 4-6 years.

Garlic mustard is a nasty invasive, toxic to people, and a very serious threat to the forest understory in New England. (Unfortunately, deer will not eat it.) Three very promising candidate beetles were identified in Europe and studied in quarantine in the US. But now something is killing the plants in the long-term study plots-possibly a plant pathogen. The biocontrol project is “on hold” until scientists can figure out what is causing this decline in the garlic mustard.

Emerald Ash Borer: Three species of parasitoids have been researched and released. But, to date, they have not shown an ability to keep this pest from spreading “like wildfire.”

Asian Longhorn Beetle: Folks at USDA/Otis Air National Guard Base/Plant Health Inspection Service are focused on eradication and are not close to biocontrol of this terrible pest.

Hemlock Woolly Adelgid (HWA): Several biological control agents have been released, but until recently, nothing looked promising. A predatory beetle native to the Pacific Northwest has been released at many sites throughout the HWA range, and it has not only established, but is building up and spreading from release sites in several states, an encouraging development.

Most Eastern and Carolina hemlocks are susceptible to this insect, but a resistant grove of hemlocks found in New Jersey has been researched by URI which is now evaluating propagation methods. Resistant trees are still several years away from being available in nurseries. In the meantime, a one-time soil drench of Merit is effective for 8-10 years. Use it sparingly as it can cause mite outbreaks on the hemlocks. 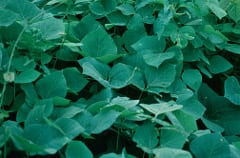 Kudzu: An Asian insect that feeds on kudzu was recently accidentally introduced into the southeastern US. The insect causes substantial damage to kudzu, but it also feeds on soybeans and is a serious nuisance in houses. It has become apparent that the cons outweigh the pros, and an active insect biocontrol program is underway against this beetle.

Tree of Heaven: A verticillium wilt has been found killing stands of this invasive tree in Pennsylvania and a few other states. Scientists are studying means of enhancing the spread of this pathogen.

Black Swallow-wort: Two species of leaf-feeding moths discovered in Europe and evaluated in quarantine at URI are awaiting certification for release. One species is expected to be released soon on a small island off Woods Hole.

Brown Stink Bug: Scientists at the USDA, Rutgers and the University of Maryland are investigating possible controls.

Oriental Bittersweet Vine: In the past, finding biocontrols has been complicated by the presence of native bittersweet. But the native species has now been largely displaced by the Oriental, so it may be time to seek a biologic control agent in China. A solution is at least a decade away.

Phragmites: The non-native invasive species from Europe is a huge problem. Scientists at Cornell and URI, working with CABI have identified two (2) moths that may effectively control the invasive species without harming the native one, but roll-out is still years off.

Spotted wing Drosophila: This new invasive from Asia infects the fruit of blueberries, raspberries and grapes. It is similar to a fruit fly and was found first in CA in 2008. Biological control is not yet available.

Let’s hope that scientists continue to find success controlling these and other invasives using insects and diseases that co-evolved with them, to bring them back into balance. Chemical pesticides and herbicides are less effective, more costly, less likely to work over time, and bring a whole host of environmental concerns with their use.