When entering the 2011 growing season I had many questions floating around in my mind regarding the impact of compost and compost tea on the soil and plant health at Garden in the Woods. I was skeptical about believing all the claims being made in the industry as to its benefits, especially the impact it has in this Garden. Within the realm of any organic product there are many variables to consider due to the fact that organic products thrive on biological processes which hinge on factors such as light, temperature and moisture.

A good starting point from which to compare future results is always essential. The native soils and onsite compost we use to brew our tea were two key components that needed to be assessed. A good representation of the soil within our garden was also necessary, and samples were collected from four separate locations to try to capture the big picture of this 45-acre property. These locations included the woodland garden, the meadow garden, the nursery stock beds, and of course the fully matured compost. All of the samples were sent to the soil testing labs at Cornell University where a comprehensive series of tests were conducted that quantify the physical, biological and chemical aspects of soils. 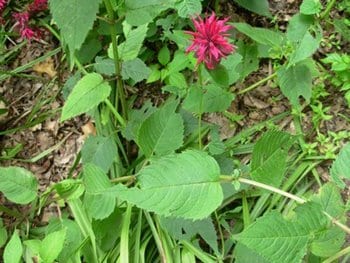 The results arrived six weeks later and confirmed that at Garden in the Woods we have the kinds of soils that gardeners dream of. The soil contains adequate organic matter, thriving beneficial biology, and the correct chemical compositions. Some evaluation of the results is still pending and another round of tests will be necessary to submit in the 2012 season to obtain consistency and pinpoint any inconsistencies. Regardless of a few small inconsistencies the tests showed we have more than ideal soil for our trees, shrubs and herbaceous materials. With this information in hand the question of “how can compost tea benefit already great soils?” came into view and needed to be answered.

The journey into the experiment began by obtaining a better understanding of the ins and outs of soils and compost and what each is comprised of. The intricacies of soil biology were unearthed in the library and with them a new set of questions. What is alive in our soil? How do those organisms interact with each other? In what balance should they be present? How do the physical and chemical aspects of soils influence the biology? These questions posed a challenge that was answered by contacting peers who base their knowledge from their experiences in the industry. Advice on how to better understand and utilize our compost tea at the Garden was obtained leading to more efficient brewing and composting practices at the Garden. Through a collection of visits, emails, phone calls and workshops, a solid grasp on what was going on in the soil became clear. In particular a workshop on compost tea at the New York Botanic Garden brought the knowledge, understanding, and management of soils and composting full circle.

With all the proper resources and knowledge up to speed a season-long experiment that staff and interns could conduct to track the benefits of using compost tea on our collection began to form. After examining our soil tests it was concluded that using compost tea as an “organic fertilizer” applied as a soil drench would be unnecessary since the native soils were already way above the optimal conditions. This left two other options on the table:

2. Using tea as a foliar application to prevent foliar diseases such as powdery mildew, black spot, and even to suppress certain insect problems such as aphids.

The decision was made to track the suppression of powdery mildew on various Phlox, Monarda, and Lonicera species as well as black spot suppression on our Kalmias. Control and test plots were designated for each species to be observed and evaluated on a weekly basis in conjunction with a weekly foliar application of compost tea. These particular species of plants were chosen because all are prone to the above mentioned diseases. Since the diseases are foliar, the level of infection is assessed visually on a percentage scale that was divided into intervals of 0%, 25%, 50%, and 75%. These intervals helped to simplify the study and make it accessible to whoever may be doing the observations and applications on any given week. Other factors that were tracked included bed location, species, date of observation and a notes section to explain each observation. The experiment began on March 5, 2011 and came to an end on August 21, 2011. 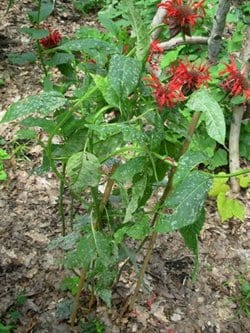 It is necessary to begin foliar applications early in the spring at the first sign of new growth. This is crucial since the basic concept behind foliar application is to establish a strong population of beneficial fungi and bacteria on the surface of the leaf before any detrimental fungi or bacteria have a chance to take up residency. By scheduling applications once a week, any new growth emerging throughout the season would be colonized by the beneficials prior to any of the non-beneficials. By creating this competition between good and bad biology a state of equilibrium would be present on the leaf surface, a state of constant competition that leaves the surface of the leaf uninfected and therefore free from damage.

This past season’s outcomes were very positive and optimistic yet, as any science-minded folks should know, a single experiment is hardly enough evidence to sustain a hypothesis. Consistency is the key to truly knowing whether or not something is successful; therefore, the experiment will be repeated again during the 2012 season. Continuing to track and monitor the benefits of compost tea year to year will further strengthen the evidence that compost tea does work and should be considered a valuable organic option to be integrated into all gardening practices; public gardens, municipalities, and homeowners alike. In 2012 a few other aspects of compost tea will be monitored and quantified such as observing its use when establishing new plantings and transplants. There will also be an expansion of the amount of plant material that gets foliar treatments.

Good tea starts with good compost, another aspect that has been moved in the right direction. By moving the compost pile to a new, sunnier location this past season. By actively turning it and monitoring moisture and temperature, the decomposition process has been sped up resulting in a nice fresh batch of compost to brew with for 2012.

To conclude, it is quite exciting to continue to move this experiment forward and fine tune the use of compost tea at Garden in the Woods. Keep an eye out for staff applying it through our tow-behind sprayer and always feel free to ask questions. Brew on!!!

Nate McCullin, Horticulturist and Facilities Coordinator at Garden in the Woods, has a degree in Landscape Horticulture and Plant Science from the University of Delaware. Previously a stock grower at North Creek Nurseries and former Garden in the Woods intern, Nate has a wide variety of experience in the industry ranging from residential landscaping, to golf courses, nursery operations, and public gardens. His hands-on techniques in conjunction with a strong horticultural foundation allow him to convey information in a way that both the plantsman and layman can appreciate.

Conserving Bumble Bees
Landscaping for Butterflies and Other Pollinators: Exotics can be Useful