Eradicating ALB: The Threat of the Asian Longhorned Beetle 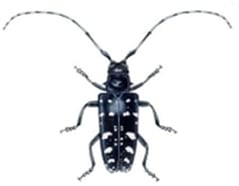 Thirty thousand of something is a difficult number to imagine. It’s even more staggering to envision 30,000 trees disappearing, but that is how many hardwood trees have been lost so far to the Asian Longhorned Beetle in the greater Worcester, MA, area. Asian Longhorned Beetle (“ALB”, scientific name Anoplophora glabripennis) is an invasive pest that was discovered in Worcester in 2008. It causes damage by tunneling deep into live trees, destroying them from the inside out. That makes this invasive insect a threat to hardwood trees throughout the state, and one that could have a serious negative impact on fall foliage tourism, the maple sugaring industry, and other forest product industries.

No one is sure how ALB got to Massachusetts, but we do know that it was introduced to the USA accidentally, through wooden pallets and crates used to ship goods here from Asia. Now that it is here, the risk of infested wood being transported around makes it even more important for everyone to learn to recognize the signs of an ALB infestation and to promptly report any suspicious tree damage. If pests like ALB are detected early, the impact on trees is much less severe. For example, the ALB infestation in Worcester wasn’t discovered until a decade after it started, giving it years to spread and resulting in the loss of those 30,000 trees. But an infestation of ALB in Boston discovered in 2010, just two years after it started, resulted in only six infested trees needing to be removed.

The best defense against ALB is a good offense. Learn the signs of Asian Longhorned Beetle and report any suspicious insects or damaged trees:

Through the Asian Longhorned Beetle Cooperative Eradication Program, the U.S. Department of Agriculture, Mass. Dept. of Conservation and Recreation (DCR) and the Mass. Dept. of Agricultural Resources (MDAR) are working towards the eradication of this beetle from our state. As part of this process, a 110 square mile regulated area has been set in Worcester County that includes Worcester, Boylston, Shrewsbury, West Boylston, part of Holden and a small segment of Auburn. There is also a 10 square mile regulated area encompassing parts of Boston and Brookline. These regulated areas restrict the movement of host trees, including firewood, since this can unintentionally spread ALB. In addition to enforcement, the program surveys for and removes infested trees, oversees replanting efforts, and provides educational outreach. 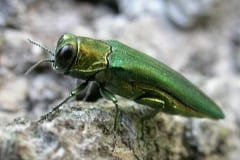 Another foe of trees that was recently discovered in Massachusetts is the Emerald Ash Borer (“EAB”, scientific name Agrilus planipennis). EAB attacks only one type of tree, the ash, but the arrival of this wood-boring beetle is no less of a threat to the forest ecosystem or to the economic livelihood of firewood producers, loggers, and other forest product specialists, particularly in Western Massachusetts where ash is more prevalent. Ash is also frequently planted as a street tree or shade tree, which means that there are a lot of trees at risk in urban areas and throughout the eastern part of the state as well.

The first confirmed find of EAB in Massachusetts was in the town of Dalton, part of Berkshire County, in August 2012. Based on the experiences of other states, we know that, unfortunately, EAB cannot be eradicated. EAB is expected to spread much further and faster than ALB, potentially leaving thousands of dead ash trees in its wake. Through early detection, we hope to slow the spread of this pest, giving communities more time to prepare and to make important decisions about how to manage their ash trees. Currently, Berkshire County is quarantined to prevent the spread of this forest pest via the movement of wood, especially firewood.

Help slow the spread of EAB by learning the signs of this pest and reporting any suspicious sightings:

Upon the discovery of Emerald Ash Borer in Dalton, Energy and Environmental Affairs Secretary Rick Sullivan commented, “The greatest assets we have in fighting these invasive species are everyday citizens. Understanding and being alert to the warning signs of infestation can save entire forests.”

How You Can Help

Anyone can contribute to stopping the spread of ALB and EAB in our state. Here are three suggestions for what you can do to help:

To learn more about these pests, or to report possible sightings, visit the following websites:

Stacy Kilb is the Asian Longhorned Beetle Outreach Coordinator for the Mass. Dept. of Agricultural Resources. Before working for MDAR, Stacy worked as a DCR Park Interpreter, and received her Master of Education from Suffolk University. She may be reached at stacy.kilb@state.ma.us or (617)626-1764.