Four years ago, a project inquiry brought me to a site that dreams are made of—an 18th-century colonial farmhouse beautifully restored over the past 30 years by its owners. The details of the home were meticulously curated; however, the gardens were entirely unconsidered. The home’s surroundings looked degraded and sadly suburban. A Euonymus here, a few Hemerocallis there, were the extent of the plantings. Below the surface, red clay soils registered 350 psi or greater in the first few inches of soil, anywhere we tested. The clunky front walk was 65 feet from the front door. There wasn’t a patio area, or even a stray chair set out, to admire the borrowed view of the serene creek and wetland due east of the home. Not an ideal situation for folks who hoped to enjoy their labor of love deep into their golden years.

With each of our projects, individual programs are specified. This one would require soil amendments, cost control, and carbon footprint reduction. To make an objective assessment of site conditions, we place great value on soil sampling and consultations with agronomists. Improvements for this site were typical for degraded clay soils—composts, humates, and compost tea extractions. Applications of calcium to balance the high concentration of magnesium were also made, along with a wetting agent to help rainwater infiltrate into the soil profile that plant roots might follow. Working in concert with these amendments, mechanical fracturing of the soil was specified to further reduce compaction. This process simply uses a backhoe to dig up the soil and drop it back into place, without mixing or destroying the structural components of the clay. 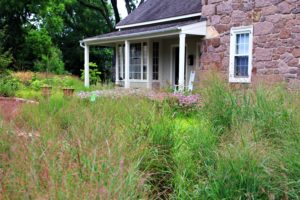 An impressionist garden was created in the courtyard garden.  These plantings do an amazing job holding and filtering rainwater.

Despite these improvements, when it came time to specify plants, many were chosen for their ability to thrive in soils that might dry out or be persistently wet in winter. Though open to the idea of a wild garden, the property owners felt most comfortable with an orderly nature. A refined, impressionistic meadow was designed that incorporated a variety of native and cosmopolitan plants. Long-lived herbaceous perennials were organized into block plantings, while intermingled areas featured a primary layer beneath an emergent layer, such as Sesleria autumnalis under Scutellaria incana. Over 50 percent of the plants installed were selected as landscape plugs to reduce costs, carbon footprint, and acclimation time for roots in native soils. Plugs also allowed us to cover a larger area with more dynamic plantings.

In addition, the scope for this project included locating a garage on-site and improving the proximity of parking to the home. The owners also wanted to add outdoor seating. It all sounded fairly simple, especially given that this suburban municipality had no standard stormwater management code. As long as we weren’t building walls over 36 inches, or changing the driveway entrance at the road, we could go forward with our design without input from the town. However, challenges quickly emerged that couldn’t be ignored. The garage, parking court, and patio significantly increased impervious cover, which mandated we manage the displacement of rainwater, even if the codes didn’t. Existing site conditions at the home included dry-stacked stone walls as tall as seven feet, which would now have to bear the brunt of the displaced water. To protect the integrity of the walls, water flowing from the new garage was directed to a rain garden planted with Carex elata and Packera aurea. This amenity was disguised within a larger plant bed to visually maintain a cohesive grade when viewing the rain garden from different angles. 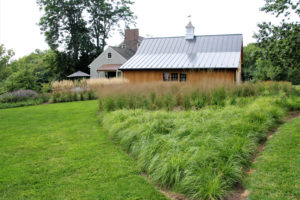 A second rain garden was installed to handle drainage from the new parking court, which was curbed and banded with sandstone that the owners salvaged from a local old barn. Stones were hand dressed on two sides and set in concrete. After the first year, significant rot was found in this garden’s plantings. To resolve this challenge, a three-inch layer of clean crushed stone was added to the base of the garden’s bowl. This drier substrate helped the plantings of Panicum virgatum ‘Shenandoah’ and Carex divulsa to aggressively colonize the garden, effectively managing the runoff.

To maintain a consistent vernacular throughout the property, the same locally-sourced, hand-dressed sandstone was selected to construct a new walkway to the original front door, as well as a terrace wall outside the northeast elevation of the home. This stone matched the home’s original retaining walls, inside which a patio was constructed of full-color flagstone, set dry above clean crushed stone. Full-color flagstone was chosen for the patio and guest entrance walkway for ease of shoveling, compared with the rough character of sandstone. Concrete was used sparingly to add sumped edging to the patio’s perimeter in order to prevent the flagstone from walking outward during cycles of freeze and thaw. 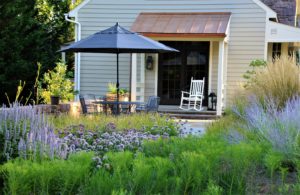 Patio with salvaged sandstone, giving the homeowners a lovely venue to enjoy their garden at the end of the day.

The efficacy of the ecological approach to this garden through soil amendments, plant selection, and hardscape design proved itself immediately. These gardens were installed in August 2016, a season marked by extreme heat and drought in Pennsylvania. The homeowners later confessed they didn’t think the garden would survive the year and would need to be entirely replanted the following spring. However, to everyone’s delight, failures were insignificant, and the garden thrived to such a degree that it was featured by horticulturist David Culp on the Longwood Gardens 2017 summer tour.

Several factors contributed to the success of this project. Without valuable collaboration with agronomists, the ecology of this site would have taken much longer to develop and the potential for mistakes and plant mortality could have been great. Instead of trucking in replacement soil, our focus was on appropriately amending the site and specifying plants and materials that would create a viable landscape with longevity. Using salvaged local stone that seamlessly spoke to the original vernacular of the architecture decreased costs and carbon footprint. Artfully integrated rain gardens proved an essential component in reducing pressure on local and regional infrastructures while not detracting from the cohesiveness of the overall design. The final accolades for this incredible property were receiving design awards from both the Perennial Plant Association and the Association of Professional Landscape Designers.

For 25 years, Donald Pell has been reshaping landscapes throughout the Mid-Atlantic region by juxtaposing what we know with the unexpected, to create an endless wonder of visual possibility. An award-winning designer, horticulturist, and lecturer, Don has gained prominence by inspiring clients to abandon the ordinary for adventurous, immersive landscapes. His designs magnify beauty through a masterful connection between stunning plants, hardscape, and sculptural features.  His landscapes have won prestigious awards from the Perennial Plant Association and the Association of Professional Landscape Designers. Situated on a 14-acre farm in Chester County, Pennsylvania, Don’s studio garden is a frequent destination for naturalistic garden enthusiasts.