By Penny Lewis on August 14, 2014 in Edible Landscaping

At Cricket Hill Garden, we have sought over our two decades of operation to introduce American gardeners to Chinese tree peonies. In addition to these imperial flowers, we also grow the better-known herbaceous and newer intersectional hybrid peonies. In recent years I have worked to expand our offerings of interesting edible landscape plants. With the tumult and uncertainty which exists in the world unceasingly beamed to little screens in the palms of our hands, I think there is a certain sense of security and stability in knowing that the yard is planted with a few long-lived fruiting trees and shrubs. While yields are always subject to the vagaries of weather and the voraciousness of pests, I believe that the interest in growing edibles will only increase in the years to come.

Successfully growing fruit can be a challenge. I and other growers of my generation seek to meet these problems with a holistic approach based on current research on the interdepence among plant and animal species in the orchard. To create a space to experiment with these exciting horticultural concepts, last fall we planted a ½ acre display orchard with Asian pears, persimmon, pawpaw, quince, medlar, and mulberry trees as well as a wide variety of fruiting shrubs and beneficial perennials interplanted amongst the larger trees. Though it will be a few years before this new plot begins producing, I look forward to sharing and discussing it with visitors to our garden. Below I describe three new (to us) and unusual fruiting plants which not only bear a nutritious harvest but also add ornamental interest to an edible landscape. By chance it happens that all three species are of East Asian origin. This was not intentional, but can perhaps be attributed to the fact that East Asia contains some of the most biodiverse regions in the world. 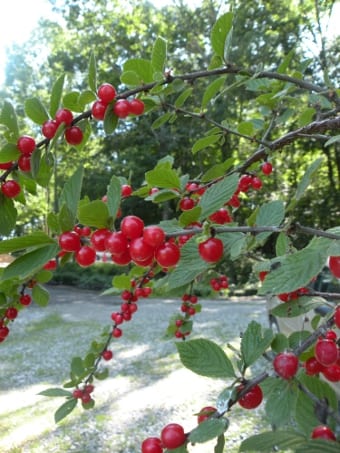 This dense, twiggy shrub grows to 6’ to 10′ tall and 4’ wide. Exfoliating, shiny chestnut brown bark is particularity attractive on the bare shrub in winter. Michael Dirr recommends pruning out lower branches in late winter to make the bark more readily appreciated. One of the first trees to flower in the early spring, around the same time as apricot trees in early March. The bare branches are covered with a profusion of pink buds which open to 3/4” pinkish-white flowers. Shrubs are somewhat self-fruitful though yields are increased with cross pollination. Dark green, 2-3” oval leaves have a hairy underside. The 1/4” scarlet fruit ripen in late June and early July. Sweet, slightly tart cherries are good for eating out of hand, or processing into pies and jams. This year we pitted and dehydrated much of the harvest and are saving them to add to our winter breakfasts of oatmeal. Thus far Nanking Cherry has shown itself to be pest and disease free, though be prepared to net the shrub or share the harvest with the songbirds. Like most Prunus species it is susceptible to branch canker, but it seems to be much more resistant than peach or apricot. It grows in a wide range of soils (pH range 5-7.5), including areas with heavy soil and prefers a full sun location. It comes into bearing at a young age, with a handful of fruit borne on three year old seedlings. Grows in USDA zones 2-7.

Prunus tomentosa is native to a wide range of China, where it grows from the northern provinces of Liaoning and Inner Mongolia to the southwestern provinces of Sichuan and Yunnan. In Chinese it is most commonly known as mao ying tao, or hairy cherry, alluding to the fine airs on the underside of the leaves. Regionally, in eastern Shandong province, it is also known as shan dou zi, or mountain pea, which perhaps alludes to the ease with which this plant adapts to rugged environments. When it was first imported into the US in the late 19th century, it was primarily used as fast growing windbreaks in the harsh climate of the upper mid-west. 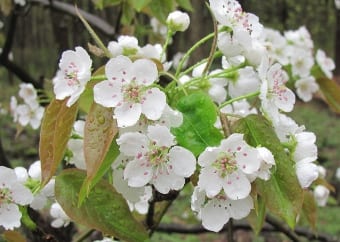 Chinese pear can be reliably grow to USDA zone 5.

Like most fruiting pear trees, Chinese pears make beautiful specimens with a profusion of spring blossoms followed by the emergence of large glossy green leaves. An added ornamental attraction of some Chinese pear cultivars is that the leaves turn vibrant shades of red and gold in the fall. Tree size at maturity is dependent on rootstock and training style. Single-leader standard trained trees on a seedling rootstock will reach 30’, while a semi-dwarf tree pruned to an open-vase form can be managed at 12-15’ tall. Grafted onto a semi-dwarf or quince rootstock, Asian pears make good candidates for espaliered specimens.

Annual winter pruning is required to remove water sprouts and encourage the growth of new fruiting spurs. Fruits are susceptible to damage from the usual orchard pests, including curculio and coddling moth. Like European pears, Chinese and Japanese pears require a neutral pH and thrive in a rich loamy soil. Chinese pears have a reputation as being slightly more cold hardy than Japanese cultivars and can be reliably grown to USDA zone 5.

While Japanese pear cultivars are relatively well known in the US, Chinese pears are comparatively less well known. Cultivated Chinese pears are thought to be the result of crosses between Pyrus pyrifolia and P. ussuriensis. Both of these species are native to China, but neither produces very desirable fruit in the wild form. Chinese gardeners began the process of domestication millennia ago, with written records of cultivated pear orchards in China dating to the Han dynasty (206 BCE – 220 CE). Perhaps the largest collection of Chinese pears in the United States is in the USDA orchards at the National Clonal Germplasm Repository (NCGS) campus in Corvallis, Oregon. It is there that many of the Chinese pear varieties sent to the USDA by the famous plant explorer Frank Meyer in the 1910s are still grown. Over the past few years I have grafted several of the NCGS Chinese pear cultivars and am now just waiting for the trees to reach bearing age. Two varieties which are currently producing for me and which I can recommend for any garden are Ya Li or duck pear (after its conical shape which is said to resemble a duck’s tail and its gosling yellow color when completely ripe), and Su Li which is plumper and slightly more rounded in appearance. Both of these cultivars are showy, early blooming varieties. Both cultivars are self-fruitful, but no doubt yields would be increased by cross-pollination. Ya Li and Su Li have the sweet, juicy crispness associated with Asian pears. Lately we have been enjoying them by making simple salads or fresh sliced Su Li pears dressed with a few crumbles of blue cheese. 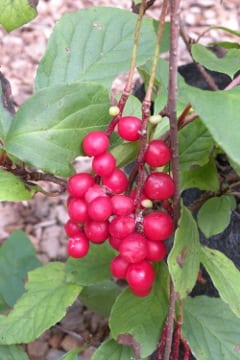 The name Five-Flavor Berry is a direct translation from this plant’s Chinese name, wu wei zi. This name aptly captures the flavor of the berries which to my taste have notes of lemon, pine and tart cherry. It’s one of those flavors for which words are lacking and is better appreciated through experience than description. This fruit is grown commercially in Russia, China and Korea, where it is used for making wine, tea and preserves. Our first crop this year was too small to process, but I did taste kombucha (fermented tea) flavored with these berries at a local co-op. They added a pleasant fruitiness to the sharpness of the kombucha. The dried berries are used extensively in traditional Chinese medicine, where they are prepared with other herbs to treat a variety of kidney aliments.

This deciduous woody vine is native to far eastern Russia and northeastern China. The vine itself is somewhat unremarkable, with medium sized ovate leaves. Chains of white flowers open in the early summer, and these form strings of bright red berries that ripen in the early fall. The species is dioecious, meaning that both male and female plants are required for fruit set. A few self-fruitful cultivars are available. Vines grow well trained along arbors or a fence and prefer a humus-rich slightly acidic woody soil in a semi-shade location. Schisandra chinensis is hardy to USDA zone 5.

Dan Furman is a second-generation peony grower at Cricket Hill Garden in Thomaston, CT. Since joining the business in 2010, he has worked to expand the peony hybridization and production programs at the nursery. In addition to peonies, he is interested in growing pawpaws, persimmons, Asian pears and other unusual fruits in northwestern Connecticut. Dan can be reached at crickethillgarden@gmail.com.

Pink Pearl Apple: An Heirloom Surprise
The Case for Native Medicinal Plants in the Landscape