By ecopro on August 16, 2011 in Edible Landscaping, Permaculture

The first plantings of the Edible Ecosystem Demonstration Garden at Wellesley College Botanic Gardens (WCBG) went into the ground this spring, beginning the multi-year implementation of a garden designed by Dave Jacke of Dynamics Ecological Design and Keith Zaltzberg of Regenerative Design Group. The garden “is designed to explore the question, ‘How well can we design a plant community that mimics the properties, principles, patterns and processes of natural ecosystems but produces food and other products useful for humans?’”1 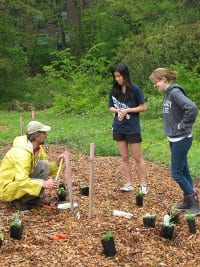 Starting on April 2nd, 2011, with a dusting of snow still on the garden’s meadow site from the night before, participants in a workshop given by the designers began grubbing out troublesome rhizomatous plants like raspberries (Rubus sp.) and crown vetch (Coronilla varia), sheet mulching over the existing vegetation and planting the nut trees around which patches of herbaceous plants would be installed. The sheet mulching for this part of the project consists of pieces of cardboard layered on the ground with seams overlapping enough to hinder the existing ground cover of native and exotic meadow plants from breaking through. Wood chips were then spread on top of the cardboard. Everyone helping on the project was surprised at how much cardboard was needed as we quickly went through the stash we had collected from donations of moving, shipping and furniture boxes and had to scavenge the college loading docks for cardboard put out for recycling. 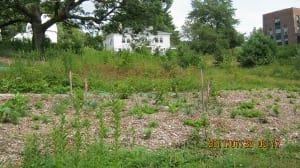 An "instant-succession" planting includes a whole plant community that quickly gets all the parts of an ecosystem established quickly and simultaneously.

We debated whether to plant out the young nut trees that had come from nurseries in the fall and had overwintered in our nursery frames. Our trees were smaller than would ordinarily be planted straight into the field, ranging from a five-inch tall oak (Quercus prinoides) to one decent sized hazelnut (Corylus sp.) at three feet. We decided the trees would be just as safe in the ground as in the nursery since the meadow would not be subject to the swings in moisture and temperature experienced by the potted plants in our makeshift nursery. The trees were planted through the sheet mulching using soil knives to break through the cardboard layer. The nut trees and other woody plants were frighteningly slow to leaf out, but as of July it looks like all but one (a hybrid chestnut) are looking green and healthy. 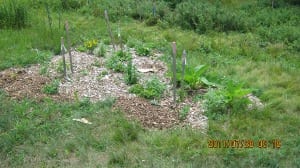 There have been three other work days since April with Wellesley College student volunteers and interns, Friends of Horticulture docents, and staff from the college. The sheet mulching in the Nut Grove is complete and the majority of the herbaceous understory has been planted. A total of 1,371 herbaceous plants of 21 species are called for by the design. Each plant has a purpose in the design, but most also grow quickly with the hope of covering the surface of the sheet mulching in order to shade out any new seeds that germinate on top of the sheet mulching and to compete with aggressive species that survive and emerge from beneath the cardboard. We are seeing the existing raspberries coming through the cardboard despite the attempt to grub them out. There is also some concern about workers confusing the milk vetch (Astragalus glycyphyllos), planted by design, with the rampant, undesired crown vetch when weeding, but so far the sheet mulching is suppressing the crown vetch except on the edges of the planting patches. 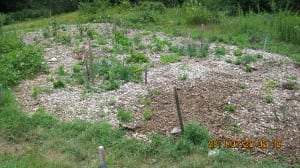 Several of our summer student interns work together once a week to make sure each of the 23 woody plants planted this spring receives several gallons of water directly and that the herbaceous plants are hand watered with a hose. The paths through the garden have not been sheet mulched and the maintenance consists of trimming with a string trimmer to remove the flowers of the crown vetch and an introduced spurge (Euphorbia sp.), as well as to keep the vegetation low. Increased foot traffic through parts of the garden has also contributed to suppressing the existing plants, mostly for the better. However, I have observed that the Pennsylvania sedge (Carex pensylvanica) that makes up a good percentage of the existing meadow vegetation does not take foot traffic well and is dying off in the paths. There is much to be learned from this garden in terms of maintenance of meadows in addition to the main purpose of demonstrating the interactions of food producing plants in their community.

WCBG welcomes visitors to its greenhouses and 22-acre Arboretum /Botanic Gardens in which this garden is located. This article details the site preparation and planting process for the new garden. For a better understanding of the designers’ thoughts please read:

Tricia Diggins is the Senior Gardens Horticulturalist at Wellesley College where she has taken care of the Arboretum/Botanic Garden for nearly 20 years. She began her horticulture career as an intern at New England Wildflower Society’s Garden in the Woods in 1990 several years after earning a B.S. in Environmental Sciences at UMass Amherst. When Tricia isn’t caring for the plants at Wellesley College, she is developing and maintaining a third of an acre edible landscape. Tricia may be reached at pdiggins@wellesley.edu.

WCBG’s Edible Ecosystem Demonstration Garden: A Cutting Edge Exploration in Ecology and Botany
Learning from the Land: A Permaculture Design Provides an Outdoor Classroom for the Conway School