Fifty million years older than any other vascular plants on Earth, MOSSES (bryophytes) offer year-round green beauty. Yet, mosses are far more than an appealing green ground cover; these verdant miniature plants can provide solutions for challenging erosion issues in today’s landscapes. Appropriate moss species can be intentionally planted as THE entire stormwater solution, or they can be featured as companion plants in a hardscape design solution. 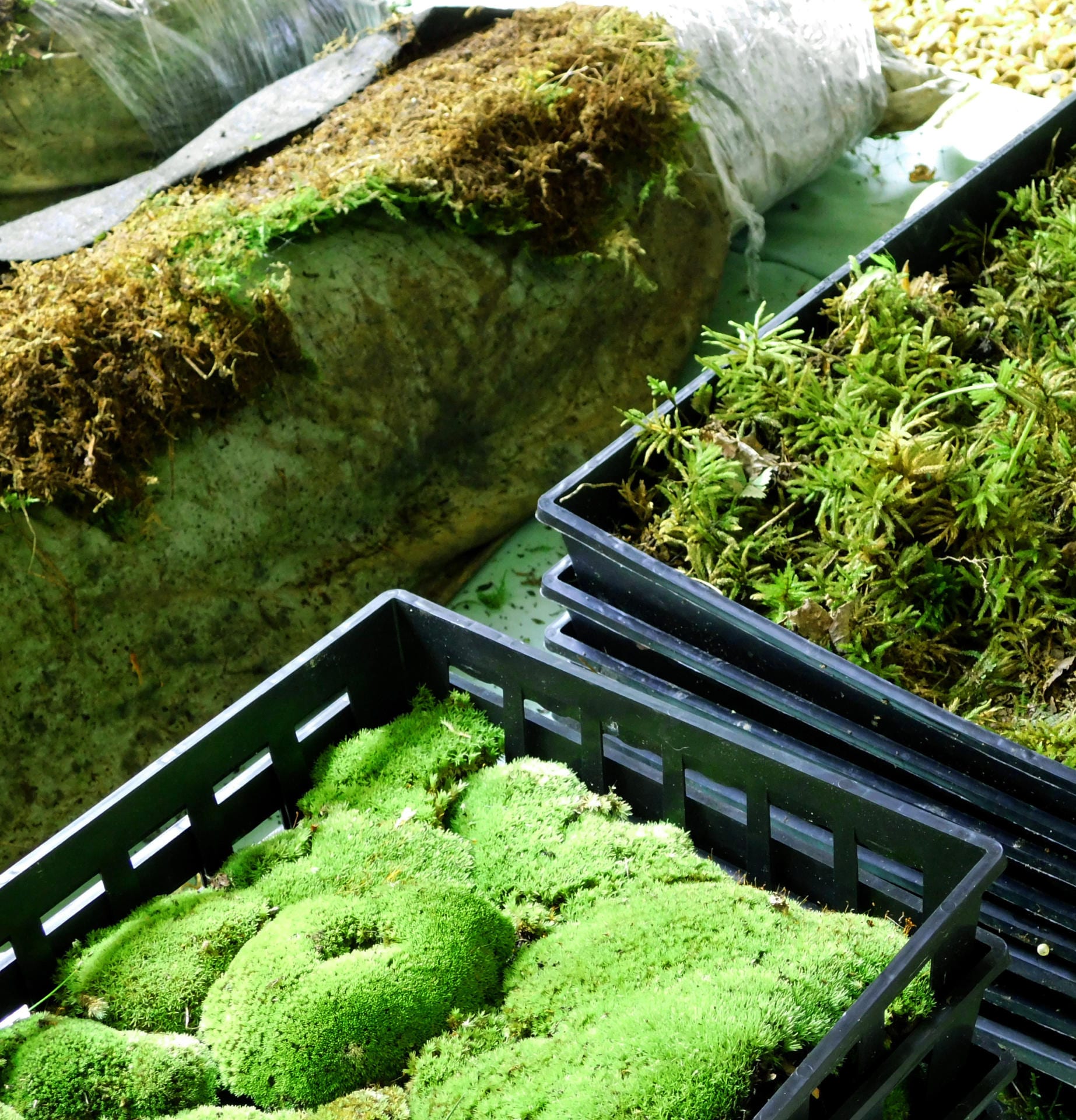 With over 10,000 species of moss worldwide, moss grow in many conditions, including full sun, and offer a variety of growth habits.

With over 10,000 moss species worldwide, there are numerous options for shade and sun circumstances. That’s right, while many folks think of mosses as a shade plant alternative, there are various species that can tolerate partial sun and some that actually prefer full sun exposures. An important consideration in selecting moss species is to realize there are upright-growing types (acrocarps) as well as mosses that grow in a horizontal fashion (pleurocarps). If you want to experience visibly expansive growth, then a sideways grower is a must. If you want to add depth and dimension, upright moss colonies provide various shapes and sizes from small pincushions to large mounding hummocks. If you wish to achieve a flat, lawn-like appearance, in addition to most all-horizontal growers, there are some upright mosses that maintain a consistent height.

Beyond choosing the “RIGHT” moss species for the “RIGHT” place, success hinges on Mother Nature providing adequate moisture and rainfall, and when she doesn’t then you need to take measures to provide supplemental watering on a consistent basis. All mosses look better when hydrated and grow best when given several brief watering sessions (1-3 minutes each session) when rain is not in the forecast for the day. I highly recommend either a professionally installed irrigation system (with designated moss zones), or a simple automated timer/controller with typical garden hoses and gear-driven sprinkler heads or oscillating sprinklers. Avoid consumer models with pre-set increments (6-12-24 hour option) in favor of a DIY timer that offers programming of specific start times (10:30 am, 1:30 pm, 5:30 pm).

If you want to resolve erosion issues immediately, then planting mosses in a contiguous or solid planting method is your best bet. With this method, sideways moss species are interleafed together and/or upright growers are placed right next to each other. Besides correcting the erosion concerns right away, planting without gaps between moss colonies provides immediate visual gratification, too.

Although I personally prefer planting directly on soil (nutrient-poor “dirt,” sand, gravel, or even clay), there are circumstances when using moss mats that roll out like green carpets provide better immediate results for erosion concerns. After conducting a site consultation and assessing the situation at a private residence, I made the decision to utilize moss carpets to resolve water runoff impact efficiently and to provide instantaneous green allure.

The installation site was 275 square foot area of hillside under a deck where nothing would grow due to low light and nutrient-poor soil. The site also had “weird” erosion channels caused by rain gushing through gaps in the deck flooring. Because of erosion “ugliness” and the inconvenience of periodic clean-up, the large patio designated as an outdoor living space (the only shady escape on the property) was never enjoyed by the client during five years in residence. 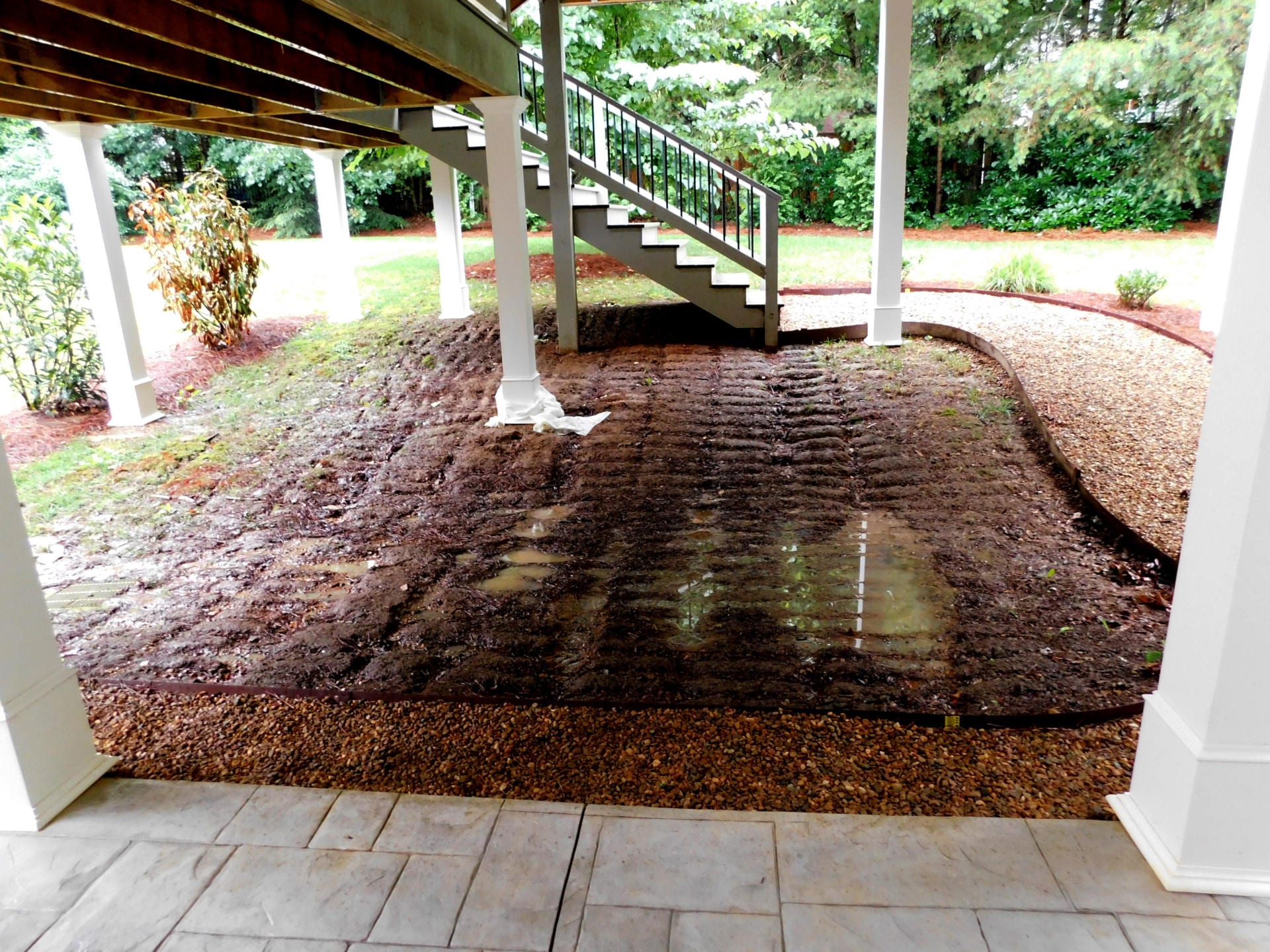 Stormwater pouring through the client’s raised deck washed soil toward the patio and puddled. 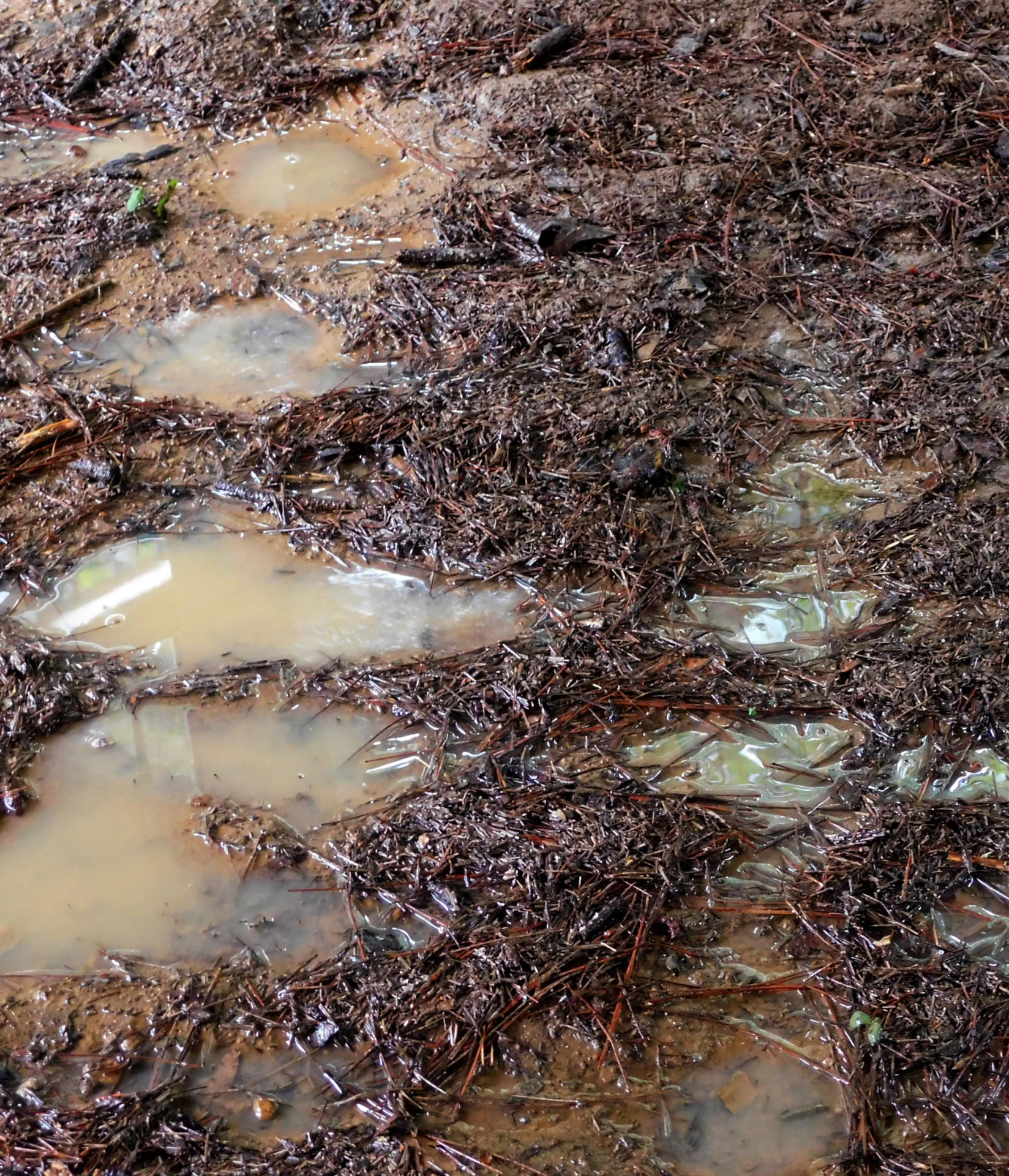 Puddles after rain drains down through overhead deck.

Resolve ALL issues and goals by planting appropriate MOSS species. 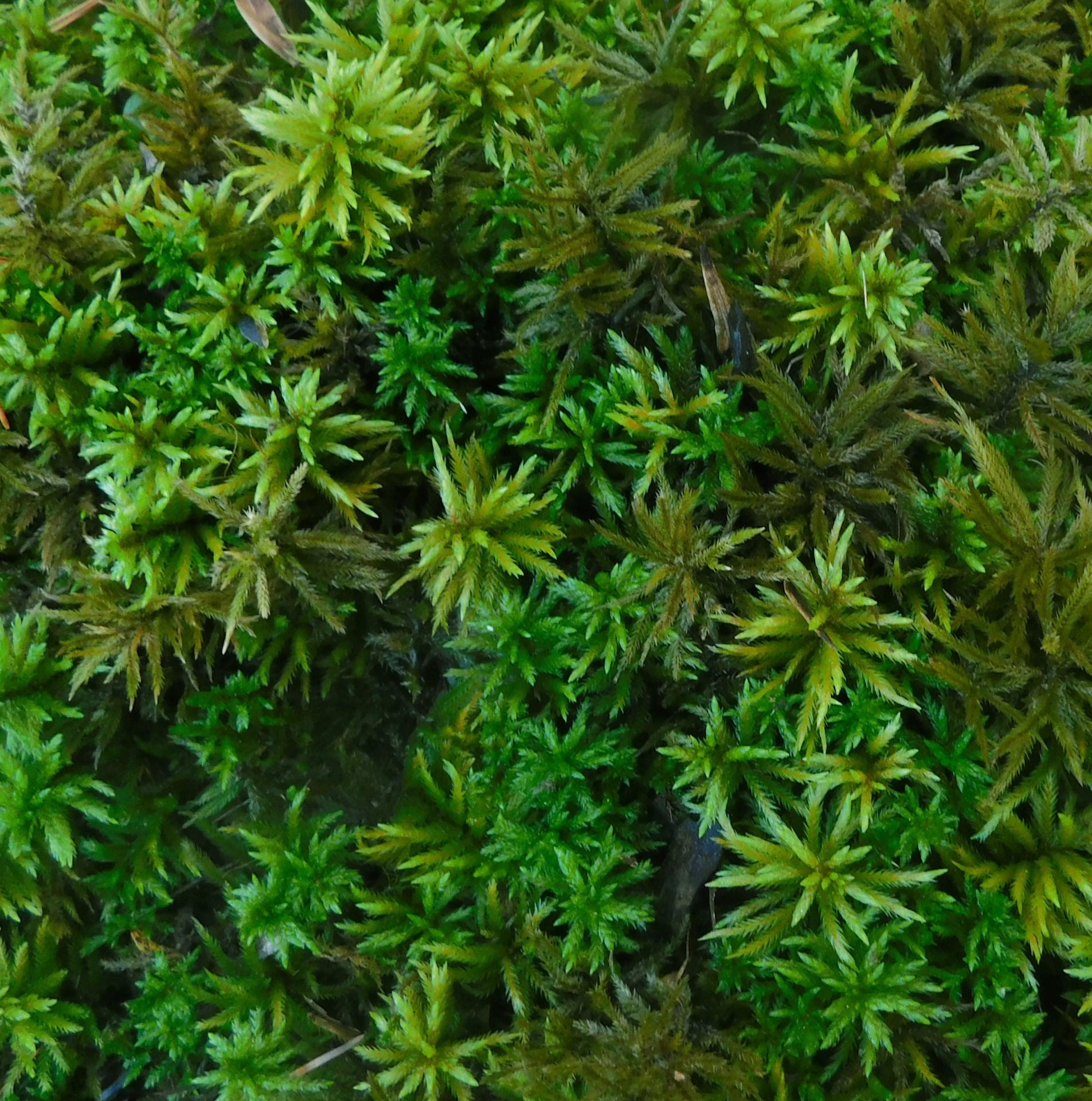 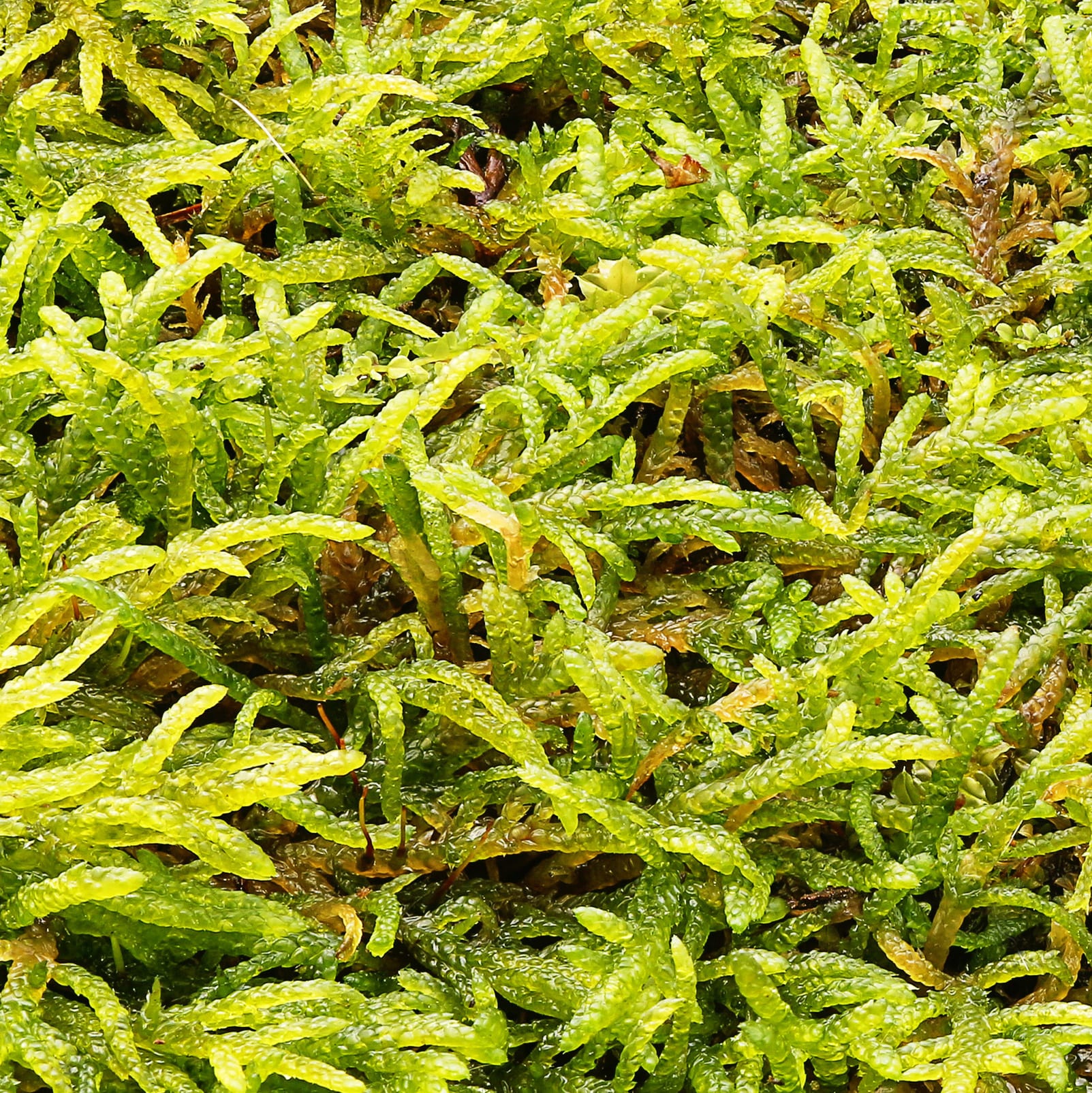 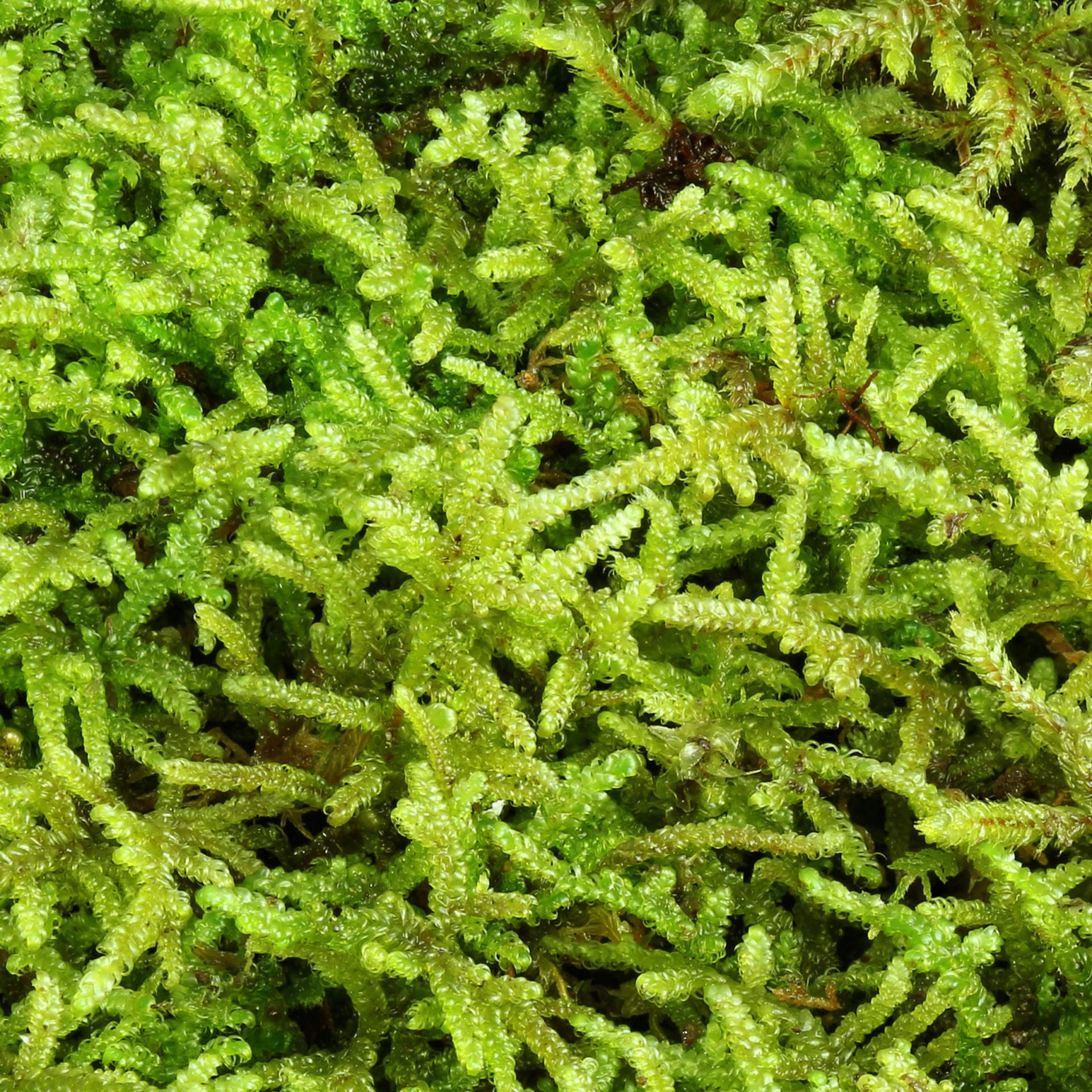 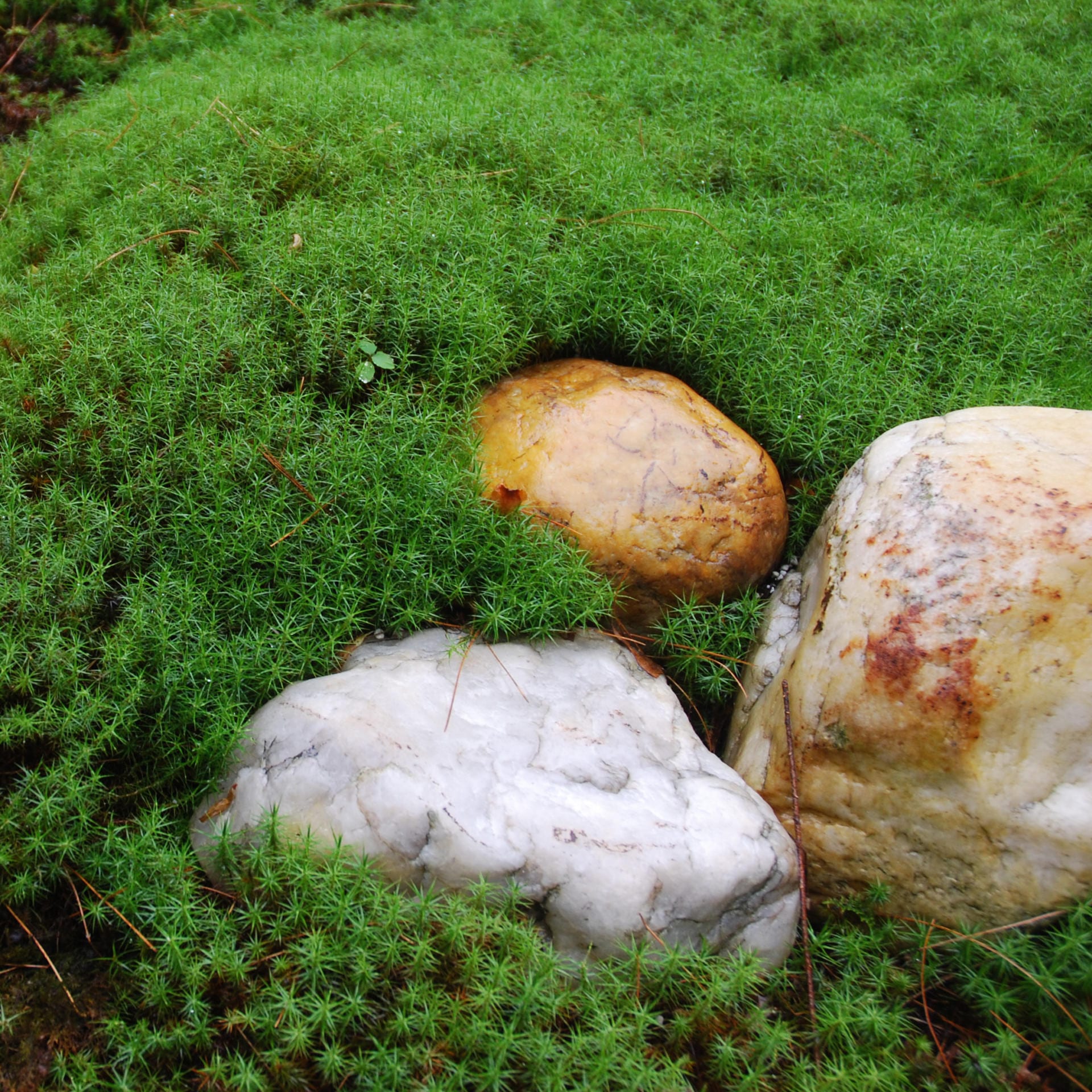 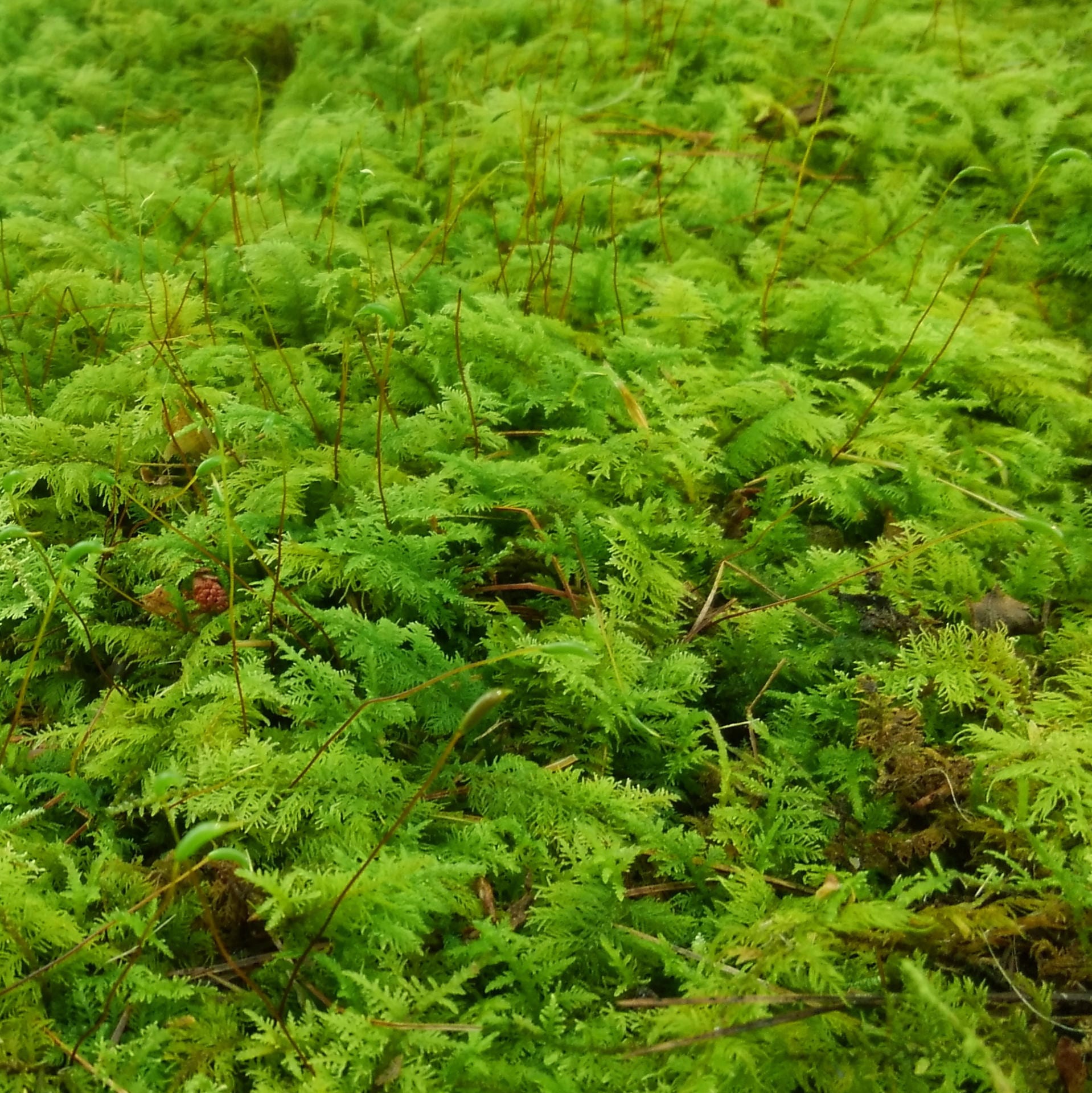 After pine needle “dressing” was removed and bare soil revealed, we tamped down the rainwater channels to level the soil. Realizing that the rain would continue to pour through the deck and create ruts, instead of using colonies, we chose to roll out pre-vegetated moss mats grown on GeoTex (4 ounce non-woven) landscape fabric to avoid visible channeling issues in the landscape. We covered the entire soil surface under the deck to prevent washing and to avoid any further muddy predicaments. Rain permeates this felt-like fabric substrate, which we attached to the ground in strategic positions using 6-inch metal landscape staples. The moss mats are composed of Hypnum imponens and Thuidium delicatulum moss species growing harmoniously in intertwined colonies. 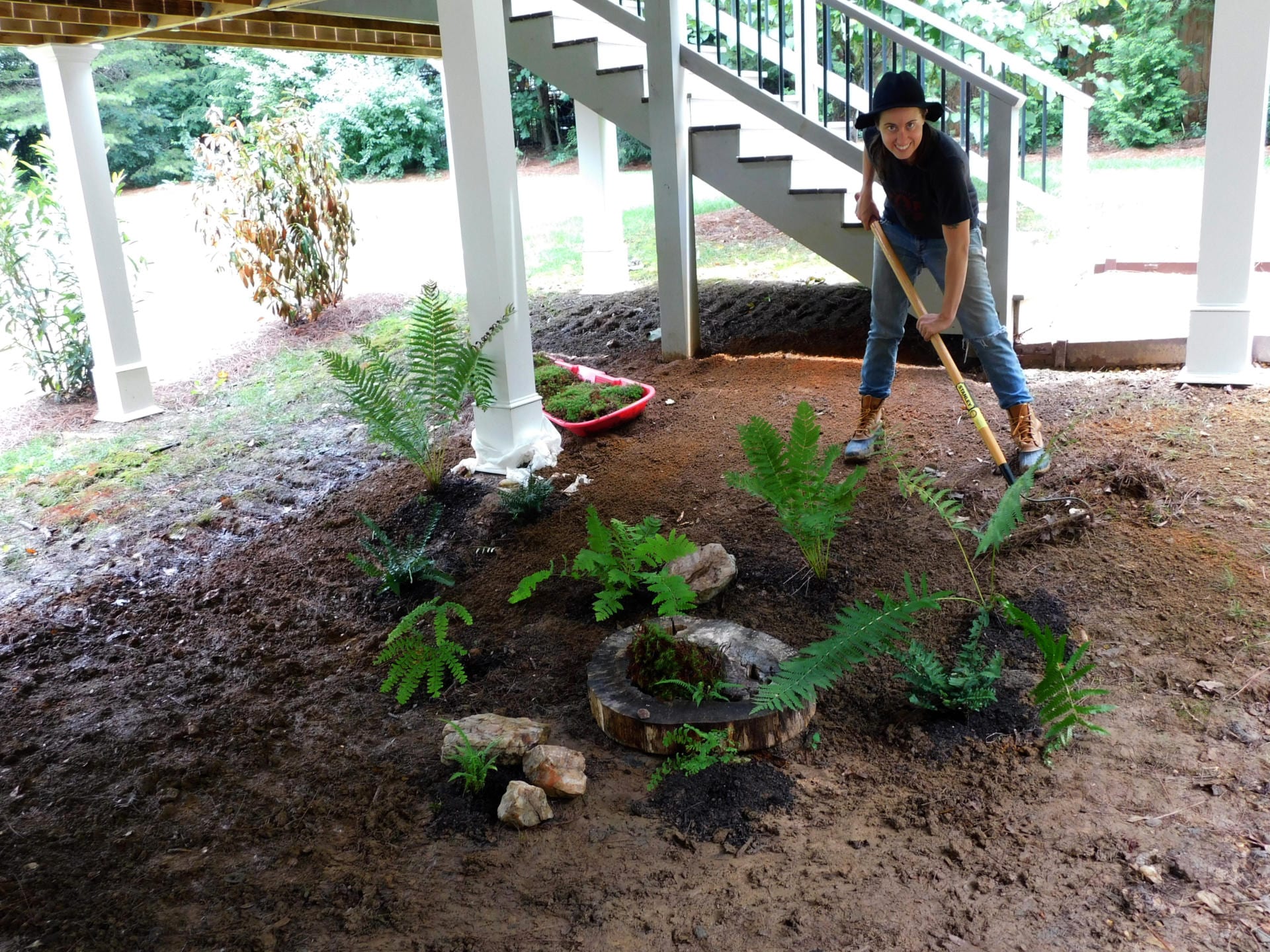 Before installing the moss mats, we level the soil and organize elements for the focal feature. 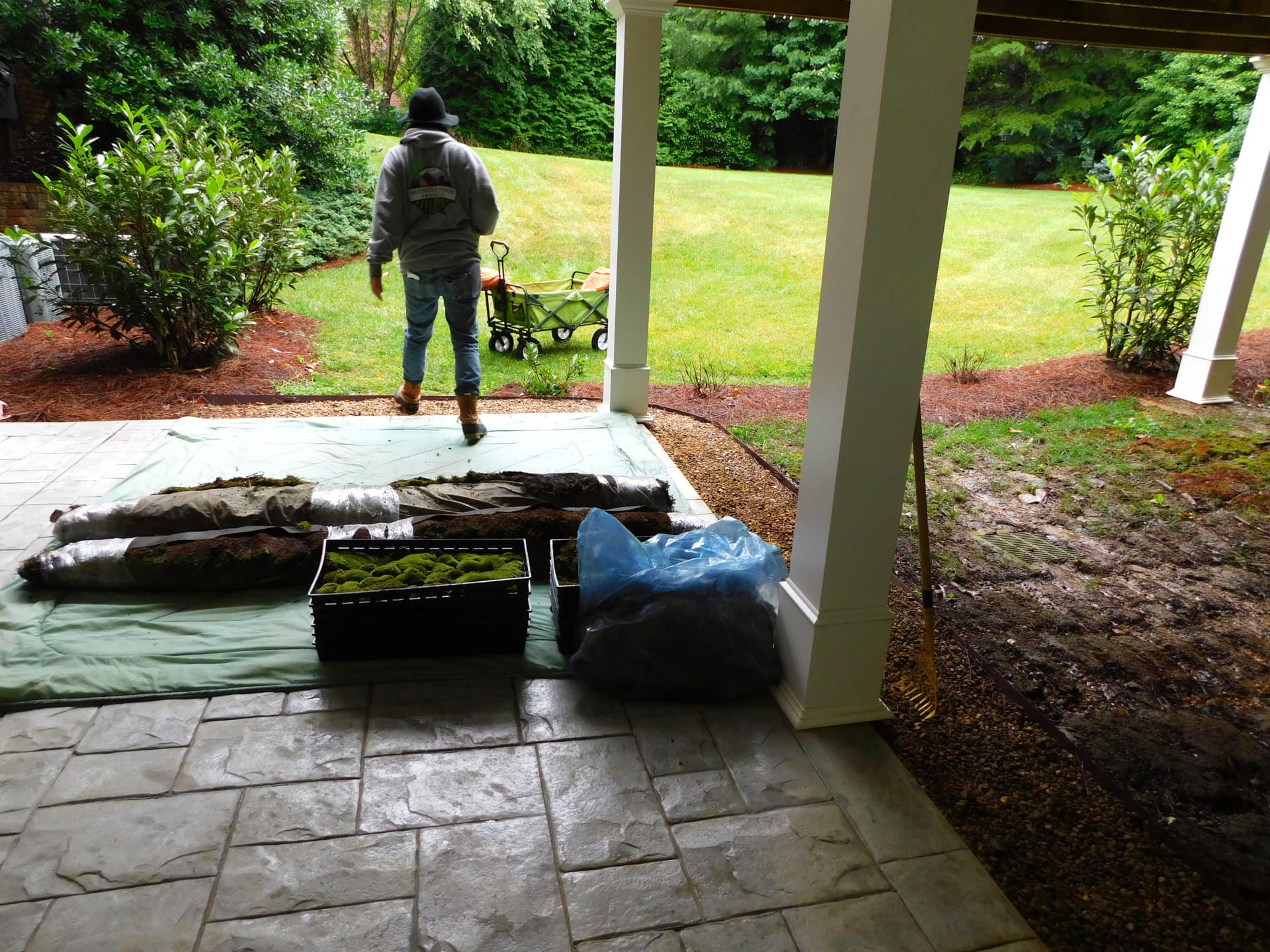 The rolls of pre-vegetated moss mats in the staging area will immediately resolve the erosion issues beneath the deck.

We developed a small focal feature (20 square foot) that incorporated quartz rocks, moss art “forest driftwood,” native ferns, and moss colonies growing in mounds, in addition to the moss carpets planted in a solid fashion to cover all exposed soil. Where water tended to pool at the foot of the hillside, Climacium americanum provided a lush solution. In the corner near the stairs, Entodon seductrix and Polytrichum commune (both sun-tolerant species) have been planted where afternoon sun creates a hot spot in the landscape. 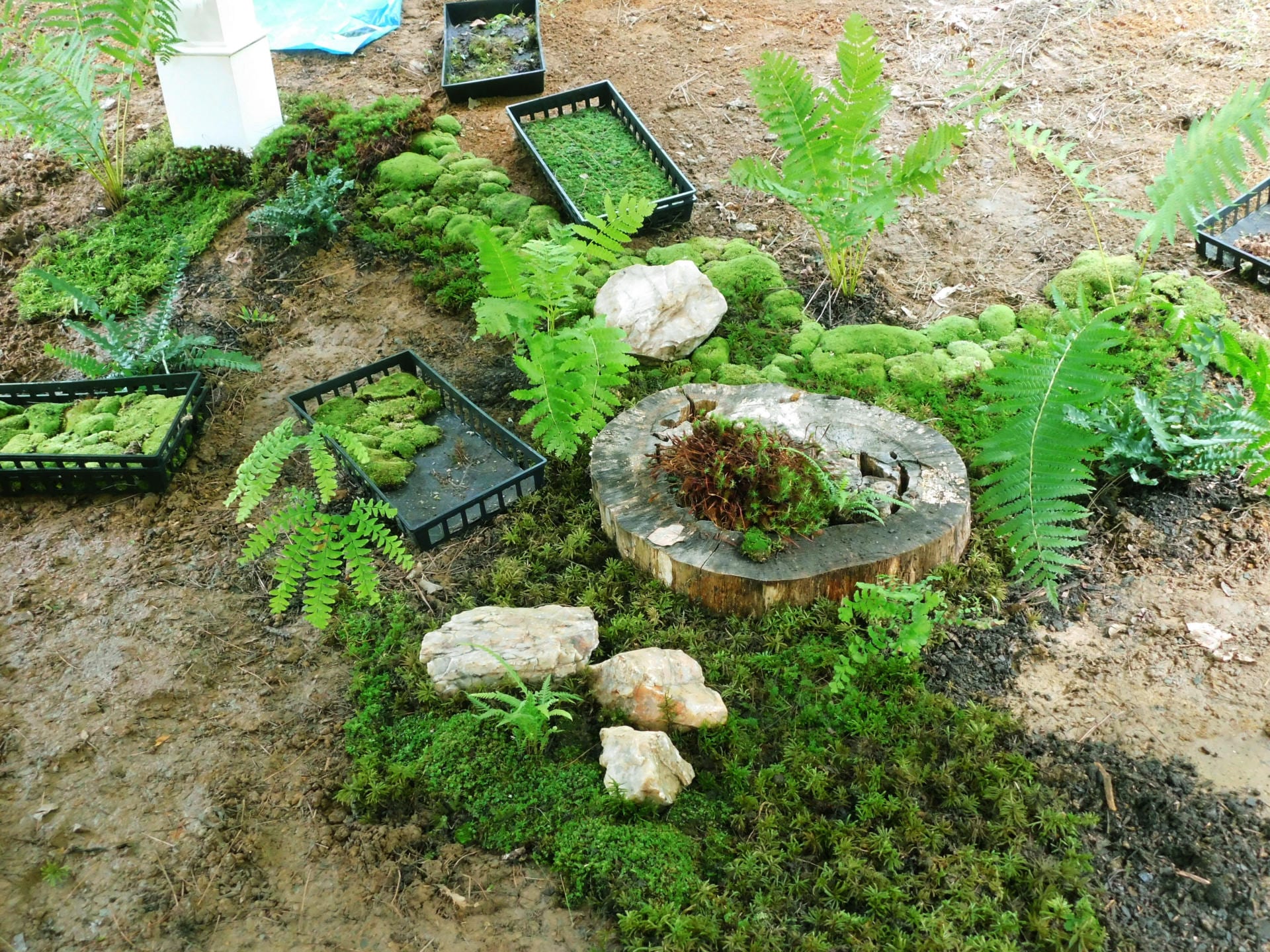 For this particular project, we added wildlife netting, secured with landscape staples, to eliminate possible shifting of moss colonies and to prevent mosses from being damaged by bird or critter damage. Note: Weeding mosses is a necessary task, but please be aware that it can be a pain to weed through netting. 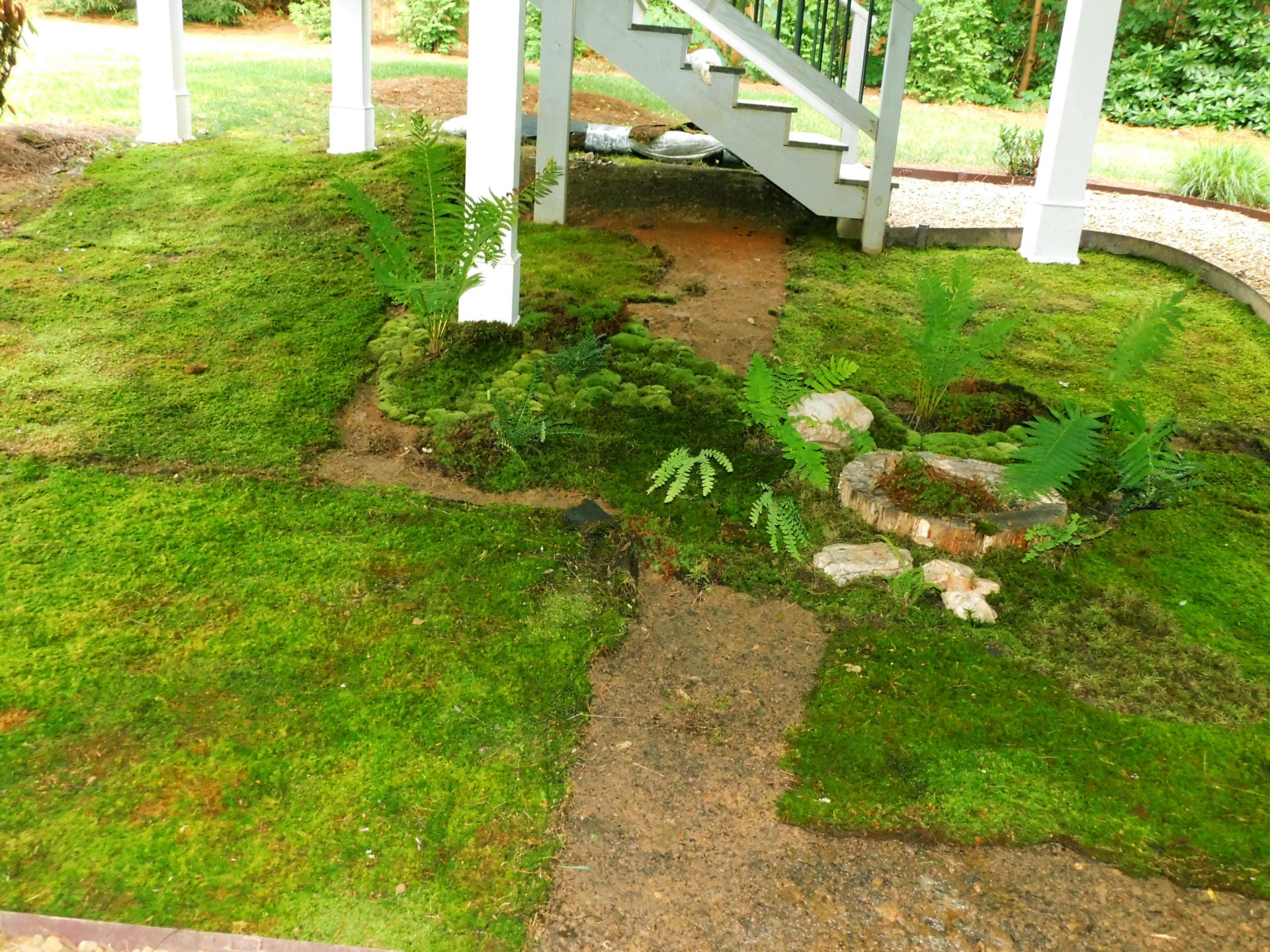 The project nears completion with most of the material in place.

A basic consumer timer/controller (Orbit, dual port) was installed and training provided to the homeowner on operation and troubleshooting the system. Heavy duty garden hoses (NeverKink) and gear-driven sprinklers (Orbit) were strategically placed to reach all areas of the project landscape. Using a “FLAT” spray array, the system automatically watered the moss installation three times each day for a maximum of three minutes for each session. 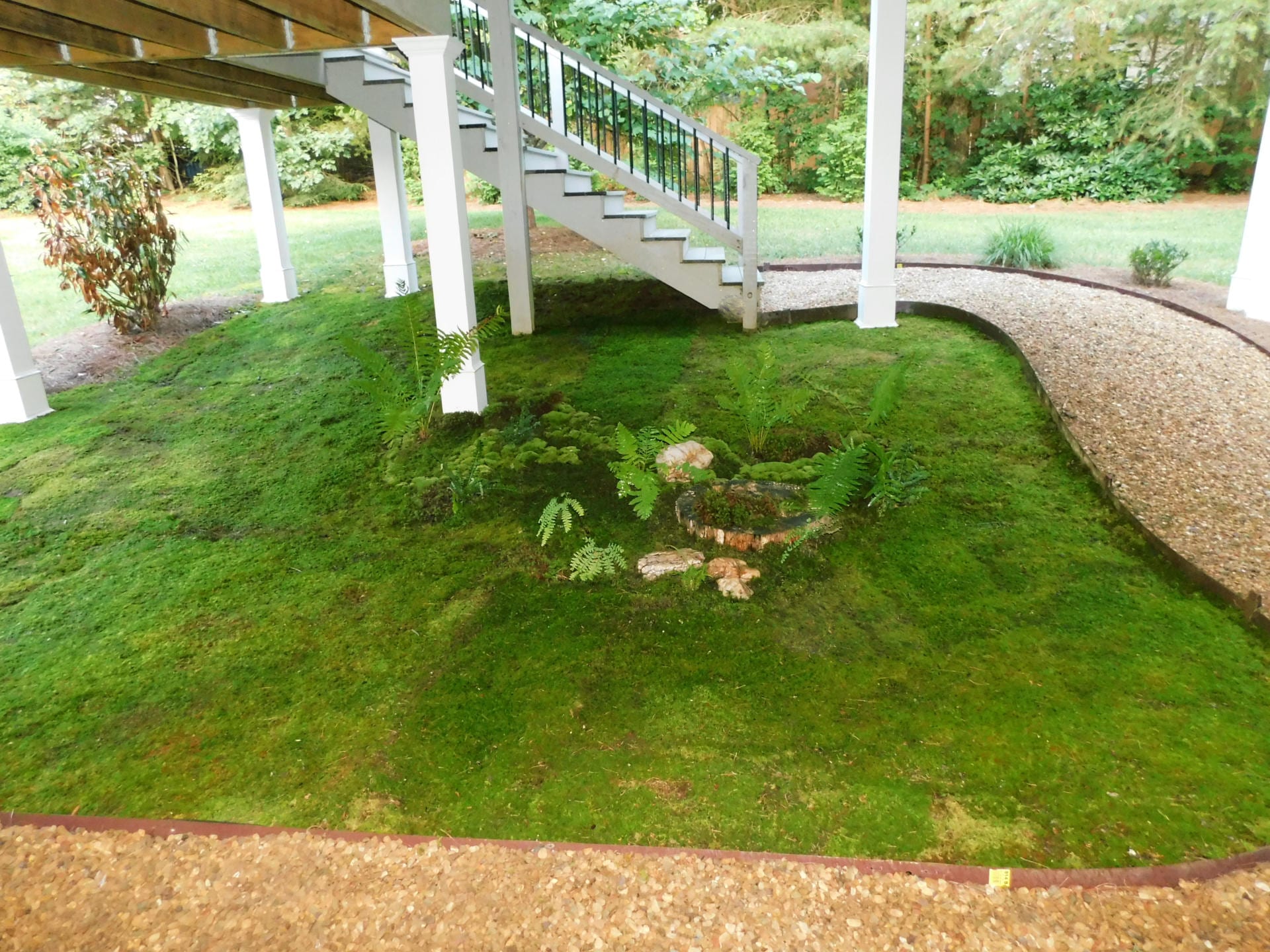 After installation, it’s important to keep the moss hydrated. We recommend brief watering session (1-3 minutes) several times a day when no rain is expected.

This moss installation, in Asheville, NC, took less than two full days on site to achieve effective erosion control goals and to provide an impressive moss landscape that will provide green appeal for years to come. 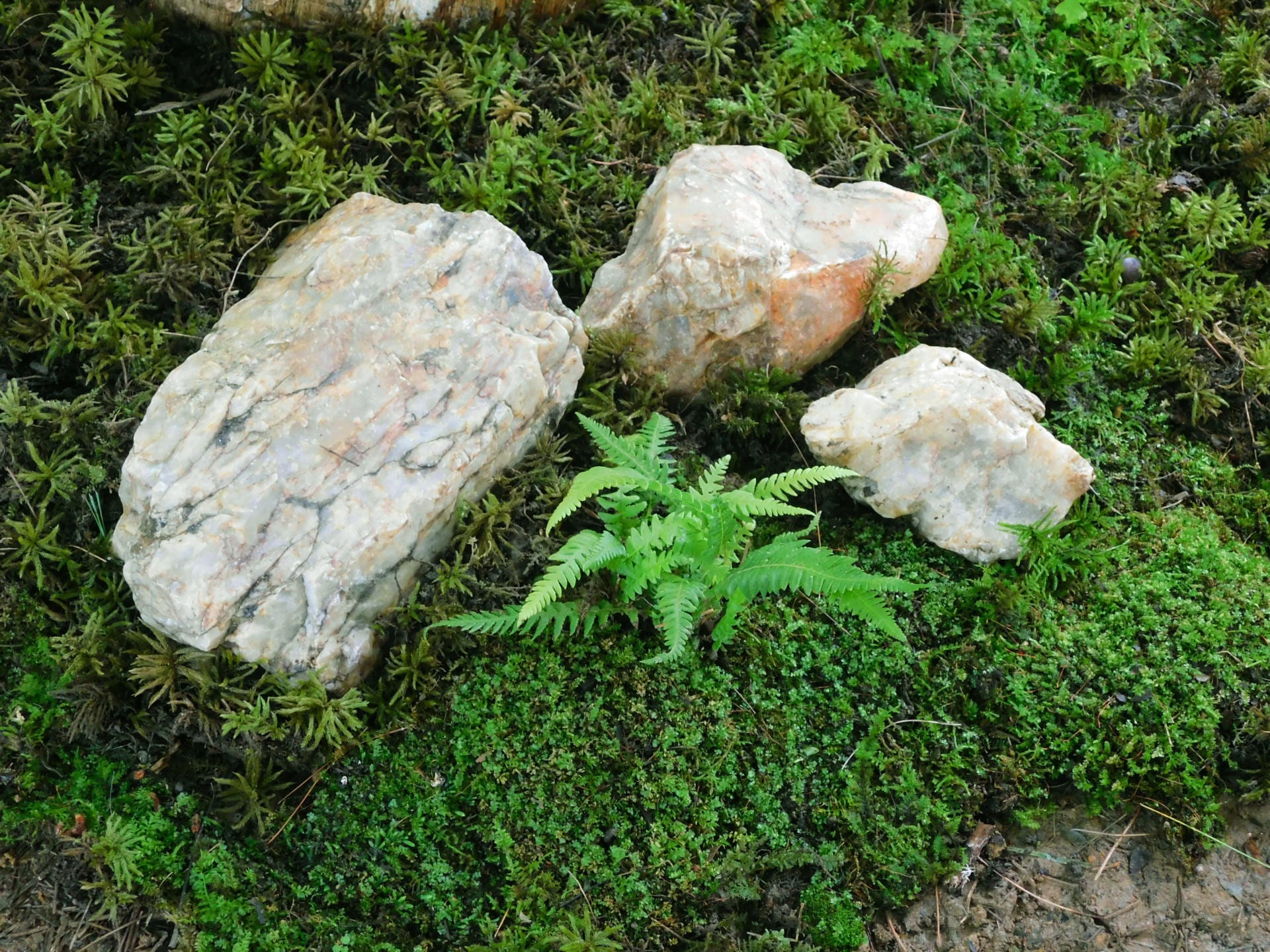 As a professional moss landscaper, positive reactions and customer satisfaction are desired goals. As a moss lover, our client was so excited that her feedback included lots of exclamation marks: “Appreciate you so much!!! Loving my moss garden!!!!” As for her husband, he was leery at first. After the installation was completed, he admitted that he has embraced the beauty of mosses. Now, he sees moss everywhere. His comment, “I drank the MOSS Kool-Aid.” Now, with an appealing moss landscape and new patio furniture, they are enjoying their improved outdoor living space on a regular basis with friends and family…without any muddy mess. 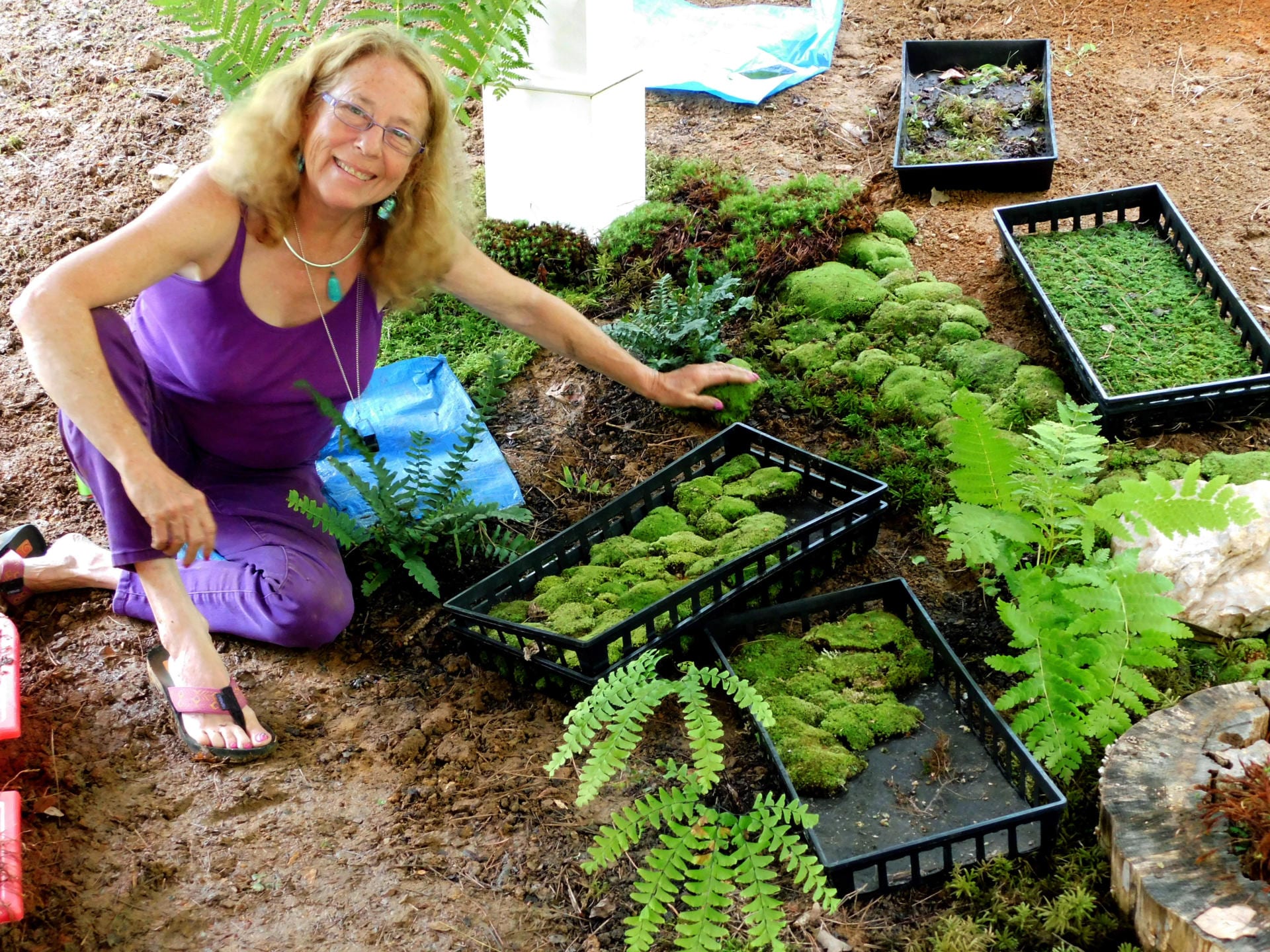 Mossin’ Annie (aka Annie Martin) is a professional moss landscaper and expert on moss gardening. She is the owner of Mountain Moss located in Brevard, NC where she rescues mosses from destruction, cultivates mosses at her Mossery and ships LIVE moss products (trays and moss mats) around the country. She is committed to responsible land stewardship and respect for our protected forests and parks. Additionally, Mossin’ Annie and her trained team create innovative landscape designs and turn-key installations. As the author of The Magical World of Moss Gardening (Timber Press, 2015), she is a popular garden speaker for national and regional conferences, lectures and hands-on workshops. To order an autographed book or to purchase live mosses, please visit www.mountainmoss.com. To engage her services as a consultant or speaker, please contact her directly: mossinannie@gmail.com. Follow Mossin’ Annie on social media: YouTube, Twitter, Pinterest, Instagram, Facebook, and join her FB group – Go Green With Moss – where fellow moss gardeners from all around the world share photos and participate in lively discussions about moss gardening success!

Many Storms and Seasons Later, How Are These Rain Gardens Holding Up?
The Art of Integrating Rainwater