Non-native Phragmites has been described as perhaps the most widely distributed and abundant grass on earth. For more than 25 years I have observed Phragmites’ effects on important habitats and attempted to control it without causing any harm to the habitats I work in, all of which support species and communities of conservation concern in Massachusetts.

Phragmites, pronounced with a short ӑ, long ī and a long ē, is derived from a Greek word meaning fence. Also known as common reed, Phragmites australis australis is assaulting wetlands across the United States. Here in New England Phragmites is found in coastal salt marshes, great salt ponds, streams and estuaries on the coast and is also found invading important calcareous wetlands in western New England and too many wetlands in between. It can be viewed as both a symptom and a disease. It often invades areas where disturbances or alterations to hydrology have occurred. 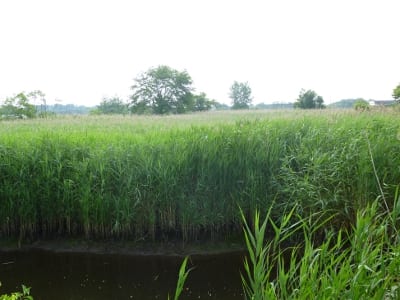 A tidal marsh complex shows signs of invasion by Phragmites.

In 1828 a document published by “gentlemen and clergy of the county” described Phragmites from a single site in Berkshire County’s Great Barrington. This and other lines of evidence led to a suspicion among botanists and habitat managers that there had been native Phragmites on the continent prior to European settlement, and questions remained about the relatively sudden explosion in Phragmites populations, especially notable since the 1950’s. Genetic studies by Sally Saltonstall at Yale provided conclusive answers. There are many genetic varieties that arrived here from Europe, Asia, and Africa; morphologically and genetically they are distinct from our native stock. Saltonstall named our native kind Phragmites australis americanus. It still grows in that Great Barrington pond, but non-native Phragmites is threatening to encroach.

Non-native Phragmites appears to have arrived as discarded packing material from ships, probably beginning in the 1700’s. It first appeared in port areas such as New York and Boston where it became rapidly dominant. It can reproduce by seed or by rooting from broken stems and rhizomes (modified below-ground stems). By looking at modern aerial photographs and on the ground observations, we see a clear role for high-energy tropical storms and hurricanes in dispersing Phragmites up and down the coast.

What Does It Do to Ecosystems?

The non-native Phragmites is a very adaptable plant form with many characteristics that give it a competitive edge over our native plants. It sheds its broad lower leaves creating a thick litter that deprives native vegetation of sunlight and prevents germination by native plants. It conducts chemical warfare by secreting a substance that suppresses other plants from growing in a process similar to the allelochemicals produced by tomatoes, walnuts, and many other plants.

Phragmites is wind pollinated, so all the varieties that were originally introduced here have been interbreeding, thus creating a super Phragmites when compared to our native stock. It alters wetland hydrology by transpiring available water and by interfering with normal circulation patterns. It has a very wide tolerance for water quality and salinity. It reproduces vegetatively from fragments and from the millions of seeds that are produced annually. Dormant Phragmites stands in the spring, fall, and winter are highly flammable and burn with explosive intensity and when found in proximity to dwelling or roads these wildfires represent very dangerous conditions. 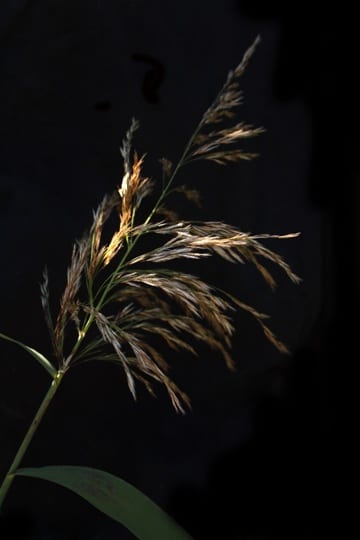 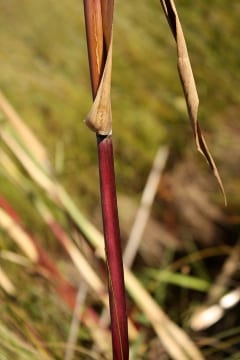 The reddish stem of the native Phragmites may be a distinguishing feature.

No characteristics are completely reliable for distinguishing non-native from native Phragmites in the northeast. Native Phragmites usually has a reddish stem, often with black spots, and is smaller in stature with a different form of seed head. Stands that have been around for long periods are intermingled with other native plants. It is often easier to identify non-native forms by leaf and stem color, rate of spread, and angle of the leaves where they join the stem. Consult a botanist to remove any doubt about identification. 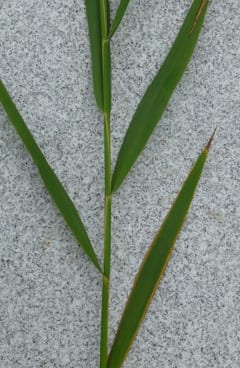 Leaves join the stem of the non-native Phragmites at a less acute angle. 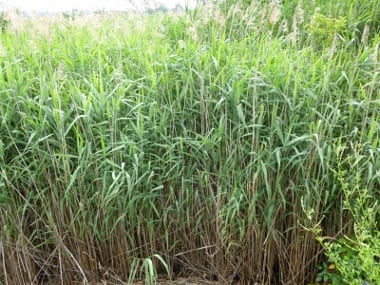 Non-native Phragmites crowds out native plants and grows as a monoculture.

Having described a formidable opponent, what can be done to control infestations? This plant is so ubiquitous that tackling every stand isn’t feasible, and despite ongoing research no biological control agents have been identified. Mechanical treatments such as repeated mowing have yielded little and only temporary success. Cutting above ground portions of the plant has no effect on the below ground resources, and Phragmites shows a remarkable capacity to rebound vigorously.

Black plastic such as one may use to discourage weeds in a vegetable garden deprives the plants of sunlight and heats the soil below it to lethal temperatures, but only for a few inches below the surface. Plants rebound from unaffected rhizomes which grow horizontally and vertically. Some methods such as dredging and excavating can remove most of the below ground material, but at the cost of egregiously altering the wetland resource’s ecology. Grazing can reduce some stands at their perimeters, but it isn’t practical in shallow water due to hoof diseases and can be very disturbing to the native community.

Having tried all of the above control mechanisms and grown weary of losing important rare species habitats, I began exploring the use of herbicides in the early 1990’s. Based on experiences in dozens of communities, I can attest that the suffix cide derived from Latin caedare, to kill, evokes very strong reactions from many citizens particularly those of us raised in the era when Rachel Carson exposed the very unwelcome results of some pesticides, especially DDT, that were being applied liberally and casually with now well-known disastrous results. The original proposals to use glyphosate in protected natural areas were very controversial, to put it mildly.

Modern cides, when applied by trained individuals for very specific results, are the only tools available when long term control and ecological restoration are the goals. Glyphosate is a non-selective herbicide that works by interfering with a plant’s ability to metabolize normally. It does this by altering amino acids, the building blocks of plant proteins. Initial applications were promising, but were there damages to non-target plants and other life forms? Trying to defend a wetland supporting more than 20 state listed species without damaging the resources appeared to be a calculated risk.

Sensitive to these issues I developed a very selective protocol called clip and drip where stems are cut and removed, and glyphosate is applied immediately to the hollow stem with a drip bottle. Extraordinarily labor intensive, clip and drip worked wonderfully and with no loss of native plants. But it isn’t practical or recommended to use this method except in the most sensitive situations. Wilkinson Ecological Design, specializing in ecological restoration on Cape Cod, has refined the method to more efficiently use this technique by bundling, cutting, and dripping on hundreds of stems simultaneously. Selective, targeted spraying via back pack mounted sprayers and mist blowers has resulted in remarkable, positive results.

These methods have been used at more than 50 sites in Massachusetts alone, and nowhere have we seen undesirable consequences. Flora and fauna of freshwater and brackish habitats are either unaffected or rebound vigorously.

Some towns staunchly believe they are protecting wetland resources by passing bylaws prohibiting the responsible application of herbicides to control invasive plants. Nothing could be further from the truth as ceding our wetland resources to monocultures of non-native Phragmites does not constitute conservation of these resources. Additionally, these bylaws are illegal because they confound State and Federal Pesticide Control acts.

Often, the Attorney General’s office, charged with reviewing all bylaws, catch these illegal bylaws, and towns are reminded that herbicide use is under the specific control of the Department of Agricultural Resources (DAR). DAR works with Department of Environmental Protection (DEP), Division of Fisheries and Wildlife (DFW), and Natural Heritage & Endangered Species Program (NHESP) in ongoing administration of the applications and approvals of new products or new uses for existing products. In some cases, the AG’s office has mistakenly approved an illegal bylaw, thus triggering an unfortunate need for proponents to abandon their restoration efforts or engage in expensive legal battles that divert scarce management dollars from being used to accomplish much needed ecological restoration and management.

Conservation Commissions and DEP wetland regulators require that control plans be filed and approved. If a site is within mapped habitats for species protected under the MA Endangered Species Act, plans require approval from NHESP too.

As a society we need to recognize and confront the menace to our native habitats presented by invasive species. As professionals we need to educate citizens and policy makers. As individuals we need to abandon unfounded biases against products that pose no risk when used responsibly. Failure to act means future generations do not inherit healthy natural areas that society has spent millions of dollars to protect.

Michigan has organized an admirable coalition for controlling Phragmites. Subscribe to their newsletter at www.Phragmites.org. A recently launched crowd funded educational effort in MA can be found at http://www.kicktraq.com/projects/2031518080/danger-in-the-reeds/

Tim Simmons is a Restoration Ecologist with MA Division of Fisheries and Wildlife, Natural Heritage & Endangered Species Program. He may be reached at tim.simmons@state.ma.us.