Reprinted with permission from Research Next University of Massachusetts Amherst.

As climate change causes species to move northward, ecologist Bethany Bradley is keeping a close eye on invasive plants in the United States. Bradley, an Assistant Professor in the Department of Environmental Conservation at UMass Amherst, says the key to mitigating impacts from invasive species is early detection. “The big key with invasive species — and this is true with plants, animals, insects, anything — is that if you catch them early, you actually have a chance to eradicate them or stop them. But once they’ve gained a foothold, the odds go down markedly.” 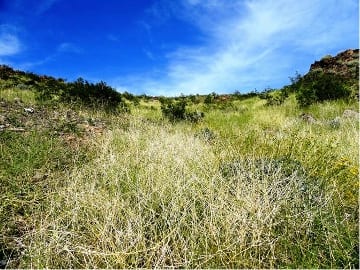 The key to thwarting invasive species, like this Sahara mustard (Brassica tournefortii) in the Mojave Desert, is early detection. Photo by Bethany Bradley.

Bradley has been creating risk assessments of invasive plant species in locations around the country. While data on the distribution of invasive plants can be readily obtained from sources such as the New York botanical garden, the data only show where these plants have been spotted, not their abundance. Bradley’s research focuses on the abundance of invasive plants in order to forecast which regions are at risk from climate change. “One plant isn’t that big of a deal,” says Bradley. “It’s the huge monoculture-style … invasions that we’re really worried about” such as kudzu, a vine that has overtaken forests in the southeast.

While the media has focused on the potential loss of iconic animal species such as polar bears, there has been less focus on the impact climate change has on plants. “Invasive species are incredibly important to consider when you’re thinking about global change,” says Bradley, noting that economic losses in the U.S. from invasive plants amount to billions of dollars each year. These loses include impacts on agriculture and forests, but there are also “second order impacts,” such as increases in fire rates from cheatgrass in the Western U.S. and increases in fire temperature from cogongrass killing pine trees in the Florida Panhandle. Invasive plants can also exacerbate the impacts of climate change on wildlife. 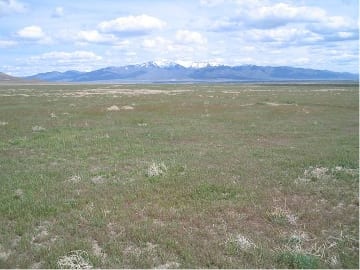 Bradley notes that not all non-native plants are a problem. In fact, she says the vast majority are “benign” such as geraniums and azaleas, both of which Bradley grow in her own backyard. However, a small percentage of the tens of thousands of plants brought in by the horticulture trade do become a problem. Of greatest concern, says Bradley, are species arriving from emerging plant trade partner countries, such as those in the Middle East and Southeast Asia. “At the early stages of trade with a new country, that’s when you have to be really worried about new invasive species appearing, because basically you’re bring in species that you’ve never seen before.”

A new law, Not Authorized Pending Pest Risk Analysis (NAPPRA) enacted in 2011, requires anyone bringing a new plant species into the U.S. to request a risk assessment from the Department of Agriculture. Bradley says the new law should reduce the number of incidents of invasive species gone awry. Though Bradley acknowledges, people still need to make wise choices about which plants they bring in. “Generally, if you’re choosing between this exotic new non-native species …versus some other native grass, I would say go native.”

The Department of Defense has granted over two million dollars in funding to Bradley’s research group through its Strategic Environmental Research and Development Program. Bradley serves as the co-PI on the grant along with her colleagues at Northern Arizona University. “The amazing thing in the U.S. is that some of our best, most pristine, so to speak, lands are owned by the military,” says Bradley. Partly due to lack of public access, the military also has an interest in keeping invasive species off their lands both to preserve biodiversity and to minimize the fire risk that can be increased by some species. 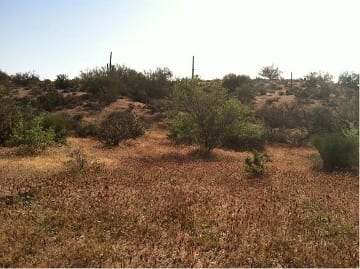 Aside from her research on invasive plants, Bradley is interested in exploring the impact of people’s response to global change. Bradley’s interest in this area developed from another project she is working on with colleagues at Princeton University, exploring choices made by farmers in South Africa in response to impacts of climate change on agricultural productivity.

Bradley will next focus her research on the risk of invasive species in the Northeast. She will collaborate with colleagues to create a risk assessment map of where problem species are likely to invade as the climate warms to temperatures currently found in states further south, which are already dealing with their own invasive plant problems. With this information, Bradley hopes we will be able to take steps to preserve New England forests.

Jed Winer is a recent graduate of the University of Massachusetts Amherst with a double major in Animal & Environmental Multimedia Production and Journalism. He is particularly interested in wildlife conservation and climate change and has interned with National Geographic Television and the Cheetah Conservation Fund. Jed can be reached via his web site at www.jedwiner.com.