General Description: Multiflora rose is an exotic invasive perennial shrub native to China, Japan, and Korea (Zheng et al 2006; Dirr, 1998; Amrine and Stasny, 1993). Introduced into the United States in the 1860s (Dryer, 1996), multiflora rose was used in the horticultural industry as readily available rose root stock for rose breeding programs and as an ornamental garden plant (Amrine and Stasny, 1993). By the 1930s it was widely planted in the Midwest and northeastern states at the encouragement of the USDA, Soil Conservation Service for erosion control programs, wildlife habitat enhancement programs, and as a natural barrier to roaming farm animals (i.e. “living fence”) (Amrine and Stasny, 1993; Evans, 1983).

During the 1960s, conservationists were warning others of the dangers of this plant to unmanaged natural areas. However, many state conservation departments and agencies still encouraged interested people and organizations to plant multiflora rose to create a source of food for song birds and for wildlife cover for many kinds of animals including, but not limited to, cottontail rabbit (Sylviagus floridanus), bobwhite (Colinus virginianus), and pheasant (Phasianus colchicus) (Evans, 1983; Munger, 2002). Evans (1983) also states that some highway departments encouraged the use of multiflora rose on highway median strips to reduce headlight glare from oncoming traffic and as a natural crash barrier to stop out-of-control cars because of this species’ ability to form dense thickets quickly.

As with other exotic invasive plants, multiflora rose was promoted for the wrong reasons while being planted widely throughout the Midwest, northeast, and elsewhere. It has escaped cultivation spreading into private and public lands, and as a result has been classified as a noxious weed in many states (Dryer, 1996; Symonds, 1963; Munger, 2002).

Multiflora rose is a climbing and rambling shrub with single stem, or at times multiple stems, which can grow up to 10 to 15 feet or more in some situations. The branchlets or canes have paired (at times), stout, curved thorns or prickles (Zheng et al 2006; Dirr, 1998; Dryer, 1996). The leaves are alternate and compound (composed of five to eleven leaflets) (Dirr, 1998). The serrate leaflets range in size from ½ inch to 2 inches long (Dirr, 1998; Dryer, 1996) and are ovate in shape with an acute or pointed tip (Dirr, 1998).

(1) High seed production and good seed viability. Munger (2002) reports that individual plants may produce as many as 500,000 seeds per year. Seeds stay viable in the soil bank for 10 to 20 years depending upon soil conditions (Munger, 2002).

(2) Vectors. Seed is dispersed by birds and other berry feeding animals, sometimes over great distances. However, most seeds fall relatively close to the parent plant which is why this species grows as clumps or thickets.

One multiflora rose plant may produce half million seeds each year. Photo courtesy of IPANE.

(3) Sexual reproduction breeding system. Breeding system is a monoecious condition whereby both male and female reproductive parts are consolidated into the same flower on the same plant (i.e. perfect flowers). Therefore, it only takes one multiflora rose to produce a colony of reproducing plants if left unchecked.

(5) Predator avoidance and/or deterrence. There are virtually no effective predators feeding on or killing this plant.

(6) The timing of leaf out and of leaf loss. Leaves emerge very early in the spring, earlier than most native plants, and this species holds onto its leaves a little longer in the fall than most native plants. I have noticed that multiflora rose begins leafing out before any other exotic invasive plants. This trait allows multiflora rose to produce more carbohydrate and other compounds in the leaves by way of photosynthesis and transport these products to the roots for storage (i.e. cold weather storage for better winter survival and spring growth). 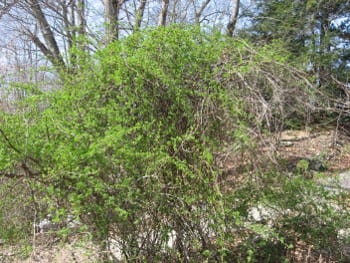 A crabapple tree shown in late March appears to be leafing out; however, the leaves are multiflora rose using the crabapple as scaffolding. 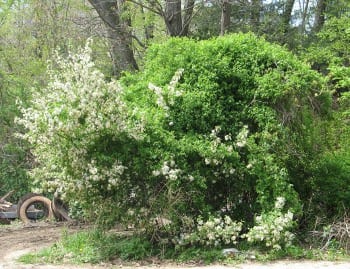 A month later, the multiflora rose has overtaken the flowering crab apple and exhibits green leaves. To the novice it may appear that the crab apple is only flowering on one side; however, the invasive has used the crabapple as a scaffold and slowly killed it.

(7) Shade/sun tolerance. Multiflora rose is shade-tolerant. However, it frequently invades sunny spots which is why it is seen growing in open fields and pastures, along field edges, along roads and paths, in open woodlands, and in any other areas that are sunny.

1. Cultural Controls: Monitor or visually inspect your property for multiflora rose. Do this at least every June and September. As stated in Part II, IPM Control Strategies for Exotic Invasive Plants, prevention is a cultural control of great value. Do not plant or encourage the planting of this species. Educating others (e.g. clients or neighbors) about the dangers of this pest is another cultural control of enormous value.

2. Mechanical Controls: Pull, dig, mow, and cut. Pull out easy-to-pull plants. If you can’t hand-pull multiflora rose (be careful of the thorns!), then you can dig out the plant or pull it out with a Weed Wrench®. Spring or early summer cutting of multiflora rose will slow its growth, but may not inhibit flower, fruit, and seed production. Repeated cutting or mowing on a monthly cycle will be more effective at stunting the plant and inhibiting fruit and seed (berry) production. Munger (2002) recommends that for established or old thickets mowing or repeated cutting from three to six times per growing season for two to four years will control the spread of this plant and reduce its existence in the mown area. If you decide to mow established thickets, please be aware that multiflora rose seed has a seed bank of great longevity. As you mow you will be increasing sunlight levels on the ground and contributing to the germination of seed bank seeds. Therefore, you may be controlling this pest for a longer period of time than you had originally anticipated. Mechanical controls can be done at any time during the year; however, the best times are the months before or during flowering.

3. Biological Control: There are no commercially available insects, mites or disease organisms yet found to be effective biological control agents. Domestic goats and sheep are used to control multiflora rose in agricultural situations (Munger, 2002).

The rose seed chalcid, Megastigmus aculeatus var. nigroflavus Hoffmeyer is a wasp native to Japan, but has become established in the United States as a naturalized beneficial insect. Both males and females exist. Female rose seed chalcids (Hymenoptera: Torymidae) lay eggs in the hips of multiflora rose plants and the developing larvae feed on the seeds disrupting seed maturation and development resulting in substantial seed mortality. However, the spread of this wasp is slow (Munger, 2002). Munger (2002) suggests that in time, the chalcid wasp and Rose Rosette Disease (RRD) will overlap in range as combined bio-control agents working in concert to controlling this pestiferous exotic. RRD is mentioned in Part II, IPM Control Strategies for Exotic Invasive Plants. RRD is a plant virus that causes the canes to undergo “witches broom” and the leaves exhibit a dark colored purple mosaic blotching, resulting in a slow death for multiflora rose (Amrine and Stasny, 1993).

Amrine and Stasny (1993) state that this bio-control combination may take decades before a noticeable decline in multiflora rose populations occur. More funding for researching and testing is desperately needed for these bio-control agents to prove the expectations desired by bio-control experts.

4. Chemical Controls: The best time for any control option is just before a plant flowers. In addition, the application of herbicides in July, August, and up to mid-September gives maximum chemical control. These are the months that carbohydrates and other plant compounds are being manufactured in the leaves by way of photosynthesis and are transported from the leaves to the roots for storage. This downward flow of plant compounds helps facilitate the transport of foliar and stump applied herbicide to the roots during these months for more effective kill. The mechanical control of cutting or mowing is also very effective during these months for the same reason. For example, when you cut the top off any plant, the roots naturally respond by pushing up more top growth (sprouting), reducing the root reserves (carbohydrates and other growth compounds) and stressing the plant. Every time you cut the top off, you force the plant to sprout which reduces the root reserves and weakens the plant.

Suggested chemical control during July, August, and up to mid-September is to cut multiflora rose down to one inch from the ground and immediately apply straight glyphosate herbicide to the freshly cut stump using a paint brush or sponge applicator. Roundup ‘poison ivy killer’ works very well. Suggested chemical control in March, April, May, and June is to cut the stump high (six to twelve inches) and let it sprout. Then cut the sprouted plant in July, August, or early September to one inch from the ground and stump-applicate with straight glyphosate herbicide. 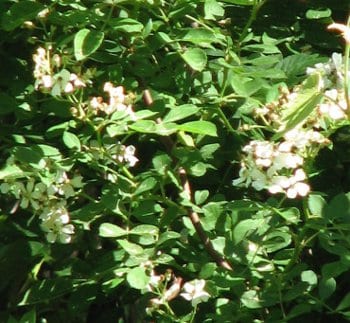 The first step to eradicating multiflora rose is to learn to identify it and educate others.

1. Properly identify multiflora rose. Educate your neighbors about what you are doing and why.

2. Hand-pull what you physically are able before multiflora rose produces berries (seeds); preferably before August.

3. Use a Weed Wrench on hard to pull plants, preferably before August.

4. If some plants prove to be too difficult to remove by way of pulling or digging, you can cut them down to a one-inch stump and immediately apply a glyphosate herbicide to the freshly cut stump using a paint brush or sponge applicator. Stump application is very effective during July, August, and up to mid-September.

If you cannot stump-applicate the hard to pull plants during the summer months, then you can instead cut the plant six to twelve inches from the ground before it starts to produce berries (seeds) in August. After the taller stump has re-sprouted, cut it to one inch above the ground and immediately apply glyphosate herbicide to the freshly cut stump. Allowing the stump to re-sprout during the summer months draws carbohydrate and other growth compounds from the roots and depletes some of the root energy making herbicide kill more effective. 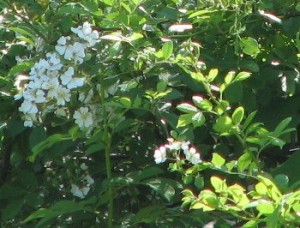 7. The above suggested example may be modified to suit existing site conditions and the level of infestation.

Amrine, James and T. A. Stasny. 1993. Biocontrol of Multiflora Rose. Pp. 9 – 21. In:  B. N. McKnight, ed., BIOLOGICAL POLLUTION: The Control and Impact of Invasive Exotic Species. Proceedings of a Symposium held at the University Place Conference Center, Indiana University – Purdue University at Indianapolis on October 25 & 26, 1991.