By Maureen Sundberg on July 16, 2015 in Invasive Plants, Sustainability

Invasive plants tend to be fast growing species found throughout abandoned landscapes, roadsides, along stream banks, and neglected gardens. These plants are effective in occupying areas otherwise controlled by our native species. As the range of non-native, invasive species expands they displace our native species and can have a profound effect on insect populations which have evolved and adapted to our native plant communities. (Summarized in D. Tallamy, 2007).¹

Removing invasive species from our landscape is an important effort. More important is the re-establishment of these vacated areas with native plants; thereby, reclaiming the landscape and creating habitat for our native insect species which form the basis of our food web and in turn serve as food for our higher level vertebrate species. This all leads to a more stable and healthier ecosystem. 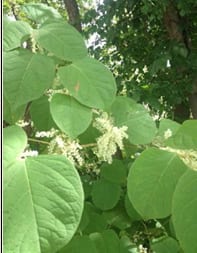 Japanese knotweed is an insidious invasive species brought to the United States as an ornamental plant that quickly colonized distressed areas on the landscape.

Japanese knotweed (Fallopia japonica) is a highly aggressive and invasive plant that appears on federal and state prohibited plant lists throughout the country. The plant is a large herbaceous perennial with spreading rhizomes. The plant originated in Asia and is a member of Buckwheat family. It was introduced as an ornamental plant to the U.S. and used as hedge plantings and to control erosion on disturbed sites.

Japanese knotweed is a very resilient plant which can grow almost everywhere. The primary expansion of the species is through rhizomes and regeneration of plant parts, particularly along river ways, the borders of wetlands and flood plain areas. 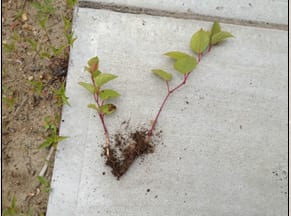 Knotweed will generate new growth from broken stems and rhizome parts. This is what makes knotweed such an insidious plant  in  our environment. It is able to clone itself from broken parts as well as aggressive rhizome growth.

What We Are Doing

The  notion  of  the permanent  removal  of knotweed or other invasive species is a noble but naïve endeavor. The local control and eradication of an invasive species, however, is achievable with adequate aftercare and re-establishment of a native plant community. Japanese knotweed, however, is particularly troublesome. Cutting and removing standing vegetation is a beginning, but without removing the root ball completely, the plant will re-colonize the area within the same growing season. Moreover, the plant will regenerate into an entirely new plant from broken stems, leaves and root parts.

Over the years we have established two different protocols for the sustainable removal and disposal of knotweed each with its own set of costs and benefits. 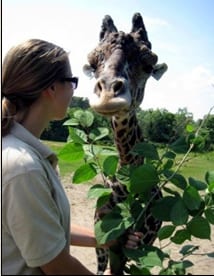 Beau loves our shipments of Japanese Knotweed. He is a 14 year old male giraffe at Franklin Park Zoo in Boston. Knotweed turns out to be nutritious natural forage for many of the herbivorous residents of the Zoo.

The first is the harvesting of the standing living plant material. This is manually cut at the stem base and used as natural forage for particular herbivores at Zoo New England’s Franklin Park Zoo. (Zoo New England is the non-profit organization that manages Franklin Park Zoo in Boston and Stone Zoo in Stoneham, MA.) The roots are then harvested with the assistance of a machine or backhoe and either stockpiled and burned or buried at depth (e.g., greater than 10 feet) below grade and beneath a geo-textile barrier. This eliminates the possibility of a successful re-colonization of the same area.

The second option includes the harvesting of the standing living plant material and use as forage for Zoo New England’s residents, but it does not include the root removal. Oftentimes our sites are located in areas that preclude the use of heavy equipment. In these situations we will continually harvest the knotweed on a routine basis, typically every 3 to 4 weeks. We are continually stressing the plant and forcing it to utilize stored energy in the root system to produce more stems and leaves without getting much energy in return. These new shoots are excellent forage for the Zoo animals  and  contribute  to  their  winter  and summer supply of forage plants. 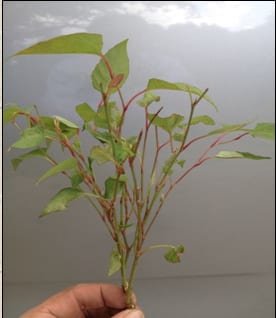 Stressed knotweed shows signs of manic growth. Perhaps a signal from the distressed root system to send up more shoots to grow more leaves in order to generate and replace lost energy resources.

Over time we have seen interesting morphological changes in the plant’s reaction to the continued stress. The roots seem to be sending information to the stems to produce many more shoots than it otherwise would; presumably in the hopes of sending out more leaves to gather more energy and store more energy resources. Our thought is that by continually stressing the root mass and not allowing the plants to transfer additional energy to the root system, it will ultimately force the plant to shut down. Without sunlight and the ability to photosynthesize, the hypothesis is that the plant will not be able to grow and will ultimately senesce.

This option can also be augmented with a chemical treatment in the fall of each year when the plant is transferring energy to the root mass for storage in the winter dormancy period. This chemical treatment creates substantial tissue damage to the  plant and further stresses the system. Our observations report that the plant height and vigor is substantially reduced in the spring months compared to neighboring untreated plants.

Establishing a liaison with Zoo New England has been paramount to our continuing sustainability efforts with our invasive species management program. In this way, we are re-thinking our disposal options and utilizing a former waste as a resource.²