Prescribed fire has been defined as any fire ignited by management actions to meet specific objectives, additionally a written approved prescribed fire plan must exist with all applicable regulatory requirements being met (NWCG 2012). New England is not commonly known as a region with fire influenced landscapes, yet actually it has a long history of wildfire and prescribed fire. Prescribed fire has been used for over 30 years by federal, state, county, municipal, and nongovernmental land managers in the region to meet varied management goals and objectives. 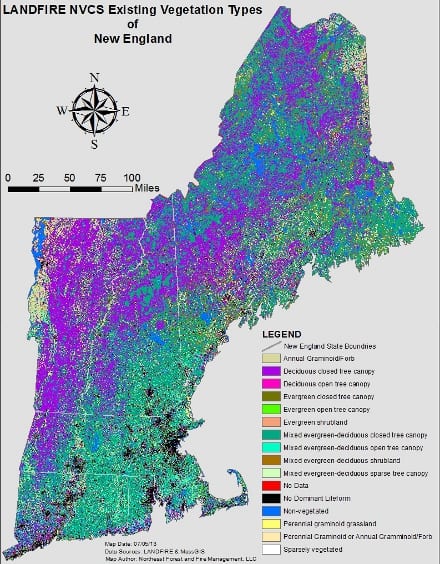 The Historical Role & Ecology of Wildland Fire in New England

The New England states consist of a diverse array of terrestrial natural communities that range from grasslands, to woodlands, to forests (Figure 1). Since the last glacial retreat in New England approximately 10,000 years ago, fire has played a role in molding many of the regions natural communities. While lightning is often considered to be the primary cause of wildfire in many areas of the United States, it is estimated that as little as 1% of the wildfires in New England are started by lightning (Pyne 1982), leaving the majority of wildfires occurring in New England to be anthropogenic in nature (human caused).

Prior to the European settlement period Native American Indians used fire for multiple purposes (Table 1) primarily around settlements but also along transportation corridors, river ways, and coastal areas (Pyne 1982 and Patterson and Sassaman 1988). During the European settlement period many fires were started not only accidently or maliciously but purposefully to shape the land by clearing it or to maintain a desired condition (Figure 2). In more recent times these anthropogenic fires have been initiated by accidental or malicious actions and put out rapidly and efficiently so as to minimize possible harm to homes and the people who live in developed areas.

As a result of weather patterns common to New England, the majority of wildland fire that occurs in New England is in the spring and fall (Pyne 1982). Virtually all natural communities have the potential to burn at some point in time with varying levels of impact and intervals with some fires being as frequent as every few years and others as infrequent as 1,000 or more years. In many natural communities especially in those that occur on well-drained, droughty soils, fire can serve as the primary disturbance factor and in others it may only be a secondary influence interacting with other disturbances such as drought, insect or pathogen outbreaks, wind storms, ice storms, or even killing frosts. The recurring fire in a given ecosystem and location results in a unique fire regime (Figure 2) consisting of fire type, frequency, fire behavior, burn severity, timing, size, and pattern all of which can influence the composition and structure of a community. 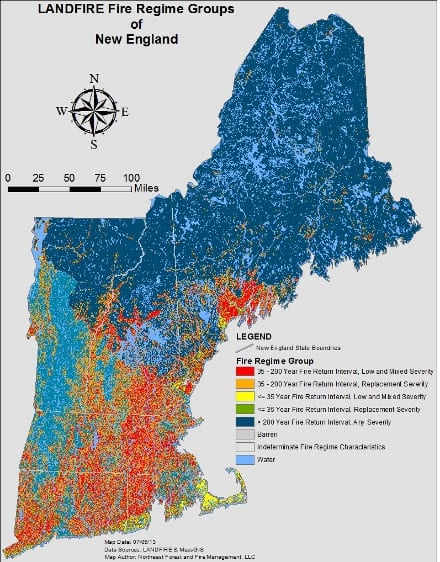 Over the thousands of years that fire has occurred on the New England landscape, the dominance of one natural community over another in the region has varied. With this variation, certain plant and animal species have either been positively or negatively impacted, thus influencing their extent on the New England landscape. In the case of early successional communities, such as grasslands, shrublands, and woodlands, fire is often a significant factor in regulating the transition and loss of associated species to mid- and late-successional natural communities. Examples of systems that benefit from prescribed fire are cultural grasslands (Figure 3) and the Pine Barren communities (Figure 4 & 5) that occur throughout New England on dry ridge tops and sandplain outwash areas such as those found on Cape Cod, MA. 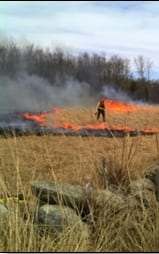 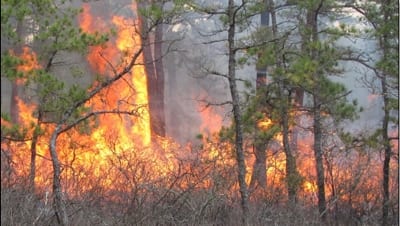 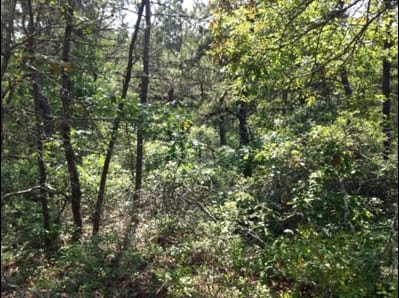 The Planning and Implementation of Prescribed Fire

Prescribed fire is the repeated pattern of burning designed to meet goals and objectives in a given location. Specific objectives for a prescribed burn are carefully identified in the planning process using the principle of SMART (Specific, Measurable, Achievable, Realistic, and Timely) objectives. These objectives fit within the goals for a particular management area. For examples see Table 2. Fire management goals as they relate to prescribed fire can vary greatly between natural communities and ownerships and are an important facet of a prescribed burn plan that has been prepared by trained and experienced professionals prior to any prescribed burn being implemented.

While fire by itself can be a powerful tool in meeting certain land management goals and objectives, managers have found that combining prescribed fire with mechanical treatments, herbicide application, or even prescribed grazing can better facilitate the restoration of degraded systems in addition to their use in the maintenance of these systems (Patterson 2005). In Pine Barrens systems such as those found on Cape Cod, mechanical treatments combined with prescribed fire have been demonstrated to be successful in meeting ecological goals and wildfire fuel hazard reduction (Figure 6).

Whether it is a prescribed fire treatment combined with another technique, prescribed fire by itself or an alternative non-fire treatment there will always be some combination of indirect and/or direct effects on vegetation (Figure 7), soil, water/air quality, human health/welfare, wildlife, and aesthetics (Waldrop et al. 2012). Detailed information on these effects is available online from “Managing Fuels in Northeastern Barrens” (Patterson 2005); “Fire Effects Information System” (Smith 2013); “Managing Grasslands, Shrublands, and Young Forest Habitats for Wildlife: A Guide for the Northeast” (Northeast Upland Habitat Technical Committee 2006), and “Under Cover: Wildlife of Shrublands and Young Forest” (Gilbert 2012), as well as in the USDA’s “Wildland Fire in Ecosystems” series on fauna (Smith 2000), flora (Brown & Smith 2000), soil and water (Neary et al. 2005), invasive plants (Zouhar et al. 2008), air (Sandberg et al. 2002), and cultural resources (Ryan et al. 2012). 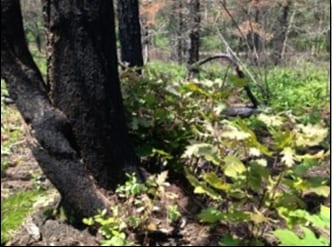 Considerations in Assessing Prescribed Fire as a Management Option

Prescribed fire implemented by experienced professionals is an exceptionally safe and effective tool for managers and property owners in many of the grasslands, woodlands, and forests of New England. When considering prescribed fire as an option, experienced professionals should be consulted at the earliest possible point in the planning phase. Officials and the public also should be engaged early on and kept informed throughout the entire process. Additionally, organizational acceptance should be established to ensure confidence in and support for use of this management tool. Often on new sites the time needed to achieve all the coordination and preparation necessary to conduct a prescribed burn can require a minimum of one year of lead time.

Because of the importance and unpredictable nature of weather it is best to ensure that funding or administrative requirements and timelines are kept as flexible as possible. If flexibility in timing is not feasible, then backup treatment methods should be planned for as a surrogate to fire in order to further management objectives. While prescribed fire can be expensive on a cost-per-acre basis for small burns, it is actually an exceptional example of economy of scale because the total costs go up minimally as the size of the burn area increases. A prescribed burn should always be implemented by a burn boss and experienced crew (Figure 8) who are familiar with local weather, fuels, fire behavior, laws and regulations, and the surrounding community. Finally it should be remembered that rarely is a single prescribed fire adequate to meet initial goals and objectives, often multiple burns are required and often alternative treatments are needed to supplement burning.

There are very few management tools that we as land managers have available to us that are so effective, powerful, and complex, while producing truly amazing results as the use of prescribe fire.

Joel R. Carlson is the Principal Consultant and Owner of Northeast Forest and Fire Management, LLC (www.ne-ffm.com) a company that provides natural resource management and planning services and specializes in wildlife habitat, forest, and fire management for ecological and fuel hazard reduction objectives in northeastern habitats. Mr. Carlson has a bachelor’s degree in Forestry with a minor in Wildlife Biology from the UMass Amherst and completed graduate course work at the University of New Hampshire in Durham. In addition to being a qualified Prescribed Burn Boss, Mr. Carlson is a certified Forester/Forest Auditor with the Society of American Foresters, a certified Ecologist with the Ecological Society of America, and is a certified Wildland Fire Manager/ Wildland Fire Ecologist with the Association of Fire Ecology. He may be reached at 508-274-2234 or at joelcarlson@ne-ffm.com.