By Judith Lipson-Rubin on July 23, 2014 in Soil Health, Sustainability

In the 19th century, as land-hungry pioneers steered their wagon trains westward across the United States, they encountered a vast landscape of towering grasses that nurtured deep, fertile soils. Today, just three percent of North America’s tallgrass prairie remains. Its disappearance has had a dramatic impact on the landscape and ecology of the U.S., but a key consequence of that transformation has largely been overlooked: a massive loss of soil carbon into the atmosphere. The importance of soil carbon — how it is leached from the earth and how that process can be reversed — is the subject of intensifying scientific investigation, with important implications for the effort to slow the rapid rise of carbon dioxide in the atmosphere.

According to Rattan Lal, director of Ohio State University’s Carbon Management and Sequestration Center, the world’s cultivated soils have lost between 50 and 70 percent of their original carbon stock, much of which has oxidized upon exposure to air to become CO2. Now, armed with rapidly expanding knowledge about carbon sequestration in soils, researchers are studying how land restoration programs in places like the former North American prairie, the North China Plain, and even the parched interior of Australia might help put carbon back into the soil. 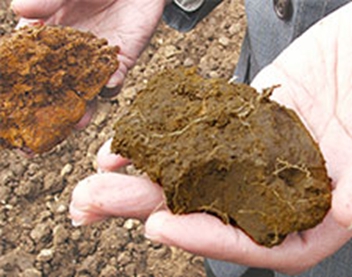 Absent carbon and critical microbes, soil becomes mere dirt, a process of deterioration that’s been rampant around the globe. Many scientists say that regenerative agricultural practices can turn back the carbon clock, reducing atmospheric CO2 while also boosting soil productivity and increasing resilience to floods and drought. Such regenerative techniques include planting fields year-round in crops or other cover, and agroforestry that combines crops, trees, and animal husbandry.

Recognition of the vital role played by soil carbon could mark an important if subtle shift in the discussion about global warming, which has been heavily focused on curbing emissions of fossil fuels. But a look at soil brings a sharper focus on potential carbon sinks. Reducing emissions is crucial, but soil carbon sequestration needs to be part of the picture as well, says Lal. The top priorities, he says, are restoring degraded and eroded lands, as well as avoiding deforestation and the farming of peatlands, which are a major reservoir of carbon and are easily decomposed upon drainage and cultivation. He adds that bringing carbon back into soils has to be done not only to offset fossil fuels, but also to feed our growing global population. “We cannot feed people if soil is degraded,” he says.

“Supply-side approaches, centered on CO2 sources, amount to reshuffling the Titanic deck chairs if we overlook demand-side solutions: where that carbon can and should go,” says Thomas J. Goreau, a biogeochemist and expert on carbon and nitrogen cycles who now serves as president of theGlobal Coral Reef Alliance. Goreau says we need to seek opportunities to increase soil carbon in all ecosystems — from tropical forests to pasture to wetlands — by replanting degraded areas, increased mulching of biomass instead of burning, large-scale use of biochar, improved pasture management, effective erosion control, and restoration of mangroves, salt marshes, and sea grasses.

“CO2 cannot be reduced to safe levels in time to avoid serious long-term impacts unless the other side of atmospheric CO2 balance is included,” Goreau says.

Soil Carbon as a Renewable Resource

Through photosynthesis, a plant draws carbon out of the air to form carbon compounds. What the plant doesn’t need for growth is exuded through the roots to feed soil organisms, whereby the carbon is humified, or rendered stable. Carbon is the main component of soil organic matter and helps give soil its water-retention capacity, its structure, and its fertility. According to Lal, some pools of carbon housed in soil aggregates are so stable that they can last thousands of years. This is in contrast to “active” soil carbon, which resides in topsoil and is in continual flux between microbial hosts and the atmosphere.

“If we treat soil carbon as a renewable resource, we can change the dynamics,” says Goreau. “When we have erosion, we lose soil, which carries with it organic carbon, into waterways. When soil is exposed, it oxidizes, essentially burning the soil carbon. We can take an alternate trajectory.”

As basic as soil carbon is, there’s much scientists are just learning about it, including how to make the most of its CO2 sequestration capacity. One promising strategy, says Goreau, is bolstering soil microbiology by adding beneficial microbes to stimulate the soil cycles where they have been interrupted by use of insecticides, herbicides, or fertilizers. As for agroforestry, programs with greater species diversity are better able to maximize the storage of carbon than monocultures. Many researchers are looking to biochar — produced when plant matter, manure, or other organic material is heated in a zero- or low-oxygen environment — for its ability to turn problem areas into productive sites while building soil carbon. Says Goreau, “Vast areas of deforested land that have been abandoned after soil degradation are excellent candidates for replanting and reforestation using biochar from the weeds now growing there.”

The Role of Fungi

An important vehicle for moving carbon into soil is root, or mycorrhizal, fungi, which govern the give-and-take between plants and soil. According to Australian soil scientist Christine Jones, plants with mycorrhizal connections can transfer up to 15 percent more carbon to soil than their non-mycorrhizal counterparts. The most common mycorrhizal fungi are marked by threadlike filaments called hyphae that extend the reach of a plant, increasing access to nutrients and water. These hyphae are coated with a sticky substance called glomalin, discovered only in 1996, which is instrumental in soil structure and carbon storage. The U.S. Department of Agriculture advises land managers to protect glomalin by minimizing tillage and chemical inputs and using cover crops to keep living roots in the soil.

In research published in Nature in January, scientists from the University of Texas at Austin, the Smithsonian Tropical Research Institute, and Boston University assessed the carbon and nitrogen cycles under different mycorrhizal regimens and found that plants linked with fruiting, or mushroom-type, fungi stored 70 percent more carbon per unit of nitrogen in soil. Lead author Colin Averill, a fourth-year graduate student at the University of Texas, explains that the fungi take up organic nitrogen on behalf of the plant, out-competing soil microorganisms that decompose organic matter and release carbon. He says this points to soil biology as a driver of carbon storage, particularly “the mechanisms by which carbon can stay in the ground rather than going into the atmosphere.”

One implication of this research, says Goreau, is that “the effect of most landscape alterations is to convert them from systems that store carbon efficiently … toward ones that are inefficient in the use of nitrogen, and as a result are losing carbon storage.” By landscape alterations, he means from forest to cropland, or from small farms to industrial agriculture operations that use the chemicals that inhibit the mycorrhizal and microbial interactions that store carbon.

Our understanding of soil microbiology and how soil life affects the carbon cycle is poised for tremendous growth, says Goreau. This, he says, is thanks to the burgeoning field of metagenomics, the study of genetic material from specimens taken directly from the environment rather than cultured in a lab. “For the first time,” says Goreau, “we can identify all major soil biogeochemical pathways from the genetic information in the microbes.”

Many call Lal’s carbon soil storage figures low. This could reflect the fact that soil carbon is generally measured in the top 15 to 30 centimeters, whereas soil at depth may store carbon at much higher rates. For example, in land with deep-rooted grasses the soil can go down five meters or more.Research by Australian and British scientists published last year in the journal Plant and Soil examined soils in five southwestern Australia sites at depths as great as nearly 40 meters. These findings add impetus to explore strategies such as working with deep-rooted perennial grasses to secure carbon at depth.

Those who champion soil carbon for climate mitigation frequently look to grasslands, which cover more than a quarter of the world’s land. According to the UN’s Food and Agriculture Organization, grasslands also hold 20 percent of the world’s soil carbon stock. Much of this land is degraded, as evidenced in the U.S. Great Plains and places like northern Mexico, Africa’s Sahel, and Mongolia.

Seth Itzkan — founder of Massachusetts-based Planet-TECH Associates, a consulting firm specializing in restoration ecology — advocates Holistic Planned Grazing (HPG), a model developed by Zimbabwean wildlife biologist Allan Savory. In this practice, livestock are managed as a tool for large-scale land restoration, mimicking the herding and grazing patterns of wild ruminants that coevolved with grassland ecosystems. Animals are moved so that no plants are overgrazed, and grazing stimulates biological activity in the soil. Their waste adds fertility, and as they move in a herd their trampling aerates soil, presses in seeds, and pushes down dead plant matter so it can be acted upon by soil microorganisms. All of this generates soil carbon, plant carbon, and water retention. Savory says HPG doesn’t require more land — in fact it generally supports greater animal density — so it can be applied wherever livestock are raised.

In Australia, which has been suffering extreme heat and wildfires, policy-makers are taking seriously programs that build and stabilize soil carbon. The action plan Regenerate Australia outlines a strategy to restore up to 300 million hectares (740 million acres). A core goal is attaining previous soil carbon levels by introducing more sustainable grazing, farming, and water-retention practices.

Says Rattan Lal: “Soils of the world must be part of any agenda to address climate change, as well as food and water security. I think there is now a general awareness of soil carbon, an awareness that soil isn’t just a medium for plant growth.”

Judith D. Schwartz is a freelance writer based in southern Vermont who as written on ecology and economics for Scientific American, Conservation, Time, and Pacific Standard. Her most recent book is Cows Save the Planet and Other Improbable Ways of Restoring Soil to Heal the Earth.  She may be reached through her website: http://www.judithdschwartz.com/

Checking In: ELA Lays Plans for 2014-15
Humic Substances: Markers of a Healthy Soil