By Maureen Sundberg on July 15, 2017 in Soil Health, Sustainability

The year 2016 was characterized by precipitation amounts well below average, coupled with record high temperatures. According to the U.S. Drought Monitor, 54% of the Northeast was in “moderate, severe, or extreme” drought conditions on December 1, 2016, after eight consecutive warmer-than-normal months (NRCC). Despite a slightly wetter than normal winter, a considerable area along the northeastern coastline was, in March, still in conditions that range from “abnormally dry” to “severe drought” (U.S. Drought Monitor). 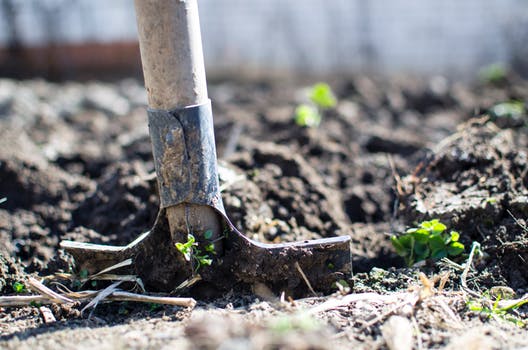 In the height of the 2016 growing season, farmers, growers, and landscapers struggled to keep up with their plants’ water needs.  Water tables dropped, and streams dried to a trickle. As the soils cracked and became dusty, you may have wondered: What is happening underground when water becomes scarce?

At the 23rd Annual Ecological Landscape Alliance Conference held at UMass Amherst on March 9, 2017 a group of panelists dug deep into this question. “The Science of Soil Biology during Drought” was moderated by Mark Richardson, Director of the Botanic Garden for the New England Wild Flower Society. The panelists were Dr. Jose Amador, professor of Soil Science and Microbial Biology at the University of Rhode Island; Dr. Kristen DeAngelis, microbiologist at UMass Amherst; and John Kenny, owner and manager of Big Train Farm in Cranston, RI.

Organisms that live in the soil (such as bacteria, fungi, protozoans, nematodes, arthropods, and earthworms) are essential to sustaining life above ground. “Soils,” says Dr. DeAngelis, “are a non-renewable natural resource that we all depend on for food and water.” Under normal water conditions, soil organisms are responsible for recycling and mineralizing nutrients back into the soil, where they can be taken up by plants and re-used in the ecosystem. In return, plants provide photosynthesized sugars that feed the microbes in the soil, and also become detritus after they die, thus completing the symbiotic relationship.

The Role of Water in Soil

So what happens when soils dry out? Dr. Amador points out that soil organisms are essentially aquatic: they need to be in contact with water to function normally. Soil organisms can move freely wherever there is water in the soil. When the soil dries up, its inhabitants have a couple of options. Some simply wait until water returns: bacteria form spores, protozoans transform into desiccation-resistant structures, and nematodes go into a sort of suspended animation. Others, like earthworms, have little choice but to dig deeper into the soil in search of wetter areas. As the soil dries, soil organisms become more and more concentrated in the shrinking pockets of water. As a result, they will often eat each other out of competition, further depleting the biological soil network. Fungal hyphae, on the other hand, tend to be less susceptible to changes in moisture levels, and expand their network to reach remaining water sources.

Biological activity in the soil can grind to a halt without water. The microbiota is unable to mineralize nutrients effectively, and their interactions with each other and with plant roots cease. Organic matter (and its associated carbon) is not broken down and returned to the soil. Inaccessible for reuse in plants, these elements become locked in an ecological standstill in the nutrient cycling process.

Many audience members at the panel expressed concern for how underground ecosystems will respond to climate change. For the most part, this is still unknown – part of Dr. DeAngelis’ work focuses on the differential effects of warming and drying on soil microbes. More severe fluctuations in weather, pairing droughts with massive rainfall, are likely to result in more frequent turnovers in soil biota, which can cause a loss of soil structure and increase the risk of erosion. Nutrients that were sequestered in the soil may be released to the atmosphere or leached away, resulting in less nutrient availability for plants.

This may sound rather bleak for the future of the landscaping industry. But for the microbes, it’s “business as usual” when water returns to the landscape, says Dr. Amador.

Dr. DeAngelis adds, “I worry about us. The microbes will be fine.”

The panelists offered some tips for working in dry conditions:

Our Lawns Are Killing Us. It’s Time to Kick the Habit
Drought and Pests