by Dr. Elham A. Ghabbour and Dr. Geoffrey Davies

Natural landscaping depends to a large extent on healthy soil. In this context ‘healthy’ means that the soil is carbon- and nutrient-rich and that it retains water but drains well. It’s important to know that soil carbon consists of two main pools, one of which is accessible to microbes as food (labile) and the other that is much less accessible and is sequestered (stabilized). This sequestered carbon in the form of humic substances (HS) confers long-term stability to a soil, ensuring that landscapers’ efforts will last well into the future without major intervention. Getting a soil carbon analysis helps with assessment of the soil’s readiness for natural landscaping.

There are four ways to measure the carbon in a soil sample. Most labs analyze by weighing a dried soil sample before and after the organic matter (OM) has been burned off in air at high temperature. The CO2 produced by burning off the OM can also be measured but that is a more expensive process. Wet chemical methods underestimate the OM and are less reliable. Measuring the light reflected by a soil is quicker but the results are hard to interpret.

In principle, each of these four methods give the total OM, but we know that total OM = labile OM + stable OM. Labile OM has a lifetime in soil of days, weeks and months, depending on moisture, climate and season. On the other hand, stable OM is protected from microbes by hiding in cracks and pores of rough mineral surfaces and has a lifetime of decades to centuries. This stable OM, in the form of humic substances (HS), is steady over time and is a good measure of a soil’s health and likely productivity.

Typical surface soils have up to 30% OM, of which HS can amount to 50-60%. Figure 1 shows the major sources of OM. Dead biomass mixed in and on top of soil consist of 50-60% cellulose and other polysaccharides, 15-20% lignins, and 15-20% of fatty lipid molecules. Depending on the water and oxygen supply, temperature, and other environmental factors, up to 80 % of the carbon in the biomass is converted to CO2 and returned to the air within a year. But with the aid of fungi, the remaining carbon is converted into humus (humified) and protected, resulting in some HS that are thousands of years old! However, these HS must eventually react with oxygen in the air to make CO2, and it is this HS respiration that prevents the earth from being covered with HS soup and completes the carbon cycle.

In other words, the difference between organic inputs to soil and the remainder after most of them have been lost as CO2 is long-lived HS.

Humic Substances in the Carbon Cycle

HS are reactive soil components. Here are some parts of the carbon cycle that involve HS.

HS have been studied with enthusiasm over the last century. Interest in them is growing despite natural obstacles. For example, we need to understand which HS components are responsible for the major processes in soils and waters, and the proportions of these components in a humic source. Finding the structures of molecules requires pure samples, but HS are very complex mixtures that are hard to separate.This complexity confuses microbes that are adept at chewing up polysaccharides and proteins with more regular structures.

To address this complexity, HS are assigned as family members based on their solubility in water. Fulvic acids (FA) are relatively small, mobile molecules that are soluble at all pH. Humic acids (HA) are larger and when not stuck to minerals are soluble only above pH 2. The oldest HS, called humin (HU), are insoluble in water at any pH and are HA-clay-mineral composites. Mass for mass, HA dominate HS and are the focus of what follows. 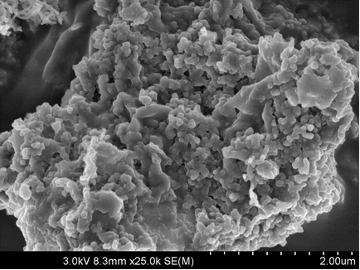 Figure 2. Scanning electron microscope image of HA aggregates. The average particle diameter is 500 nanometers (about 200 times smaller than the diameter of a human hair).

HA resist separation into fractions. They like to clump up to give nearly spherical particles (Figure 2). Scientists are beginning to speculate about their overall structures.

HA have fairly constant analyses but variable total acidity. The main elements of HS and HA are carbon (C), hydrogen (H), oxygen (O) and nitrogen (N). Despite their different origins, (forest litter, grasslands, manure, farmlands, compost, and so on), they have quite similar chemical formulas. Isolated HA can contain up to 10% each of polysaccharides and proteins, with a few amino acids and carbohydrates predominating. Allowance for the amino acid and carbohydrate contents gives the simplest formula C36H30N2O15·xH2O (x = 0-15) for HA isolated and purified from many different sources by many different labs. Although the actual chemical structures of HA are unknown, the formula implies a common molecular building block. Here, x indicates the number of water molecules associated with the building block. A proposed HA building block is shown below. 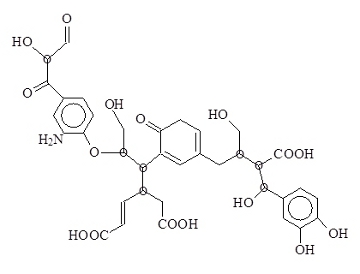 HA clumping may involve lipids. Work by Professor Alessandro Piccolo and coworkers indicates that HA in soils can be separated into smaller units like those found in FA and dissolved organic matter. These smaller molecular units can get back together (aggregate) as the soil pH drops or when they stick to minerals or when the soil dries. This is the “supramolecular” theory of HS. Lab experiments indicate that HA are a bit like Swiss cheese, with holes filled with water surrounded by solid organic regions. Clump breakup and molecular stretching occurs at higher pH because the molecules take on negative charges and repel one another.

How can we reverse constant loss of fertile top soil through wind and water erosion and from over-use of mineral fertilizers? There’s no doubt that HS are good for soils, plants, and trees. As a sustainable alternative to mineral fertilizers, we can build soils up with compost and HA derived from soft coals like lignite. However, to determine the best value for money spent we have to know the HS contents of any commercial product before we add it to a soil. Fortunately, the same methods used to measure the HS in soils work for composts and commercial HS. This means we can strive for soil improvement and sustainability with more confidence than in the past.

How You Can Help, with Free Analysis

The National Soil Project (NSP) has been measuring the total and sequestered organic matter contents of top soils and soil profiles from all U.S. states since 2009. The data establish a baseline carbon content of a soil and are a measure of its quality and health. Comparison of data for organic and mineral-fertilized soils is the main NSP objective.

Members of ELA can contribute strongly to this search for the definition of soil health. NSP urgently needs donated samples of air-dried organic top soils for analysis of their total and sequestered organic matter with established methods. The analysis requires only two heaped tablespoons of a soil. It is free of charge, receipt will be acknowledged and the results will be sent to the donor and entered into an anonymous national database. For information on how to participate please go to www.neu.edu/hagroup or contact g.davies@neu.edu. Many thanks for your assistance, which is crucial to the success of the NSP.

Soil as Carbon Storehouse: New Weapon in Climate Fight?
“Don’t Treat Soil Like Dirt!” or “Is Your Soil Healthy?”