Opportunities for a meadow project to go south lurk at every stage, from design and customer interaction to installation and maintenance. Getting a meadow going is enough of a challenge without committing avoidable mistakes. The list could just as well be 9 or 21 items, but 10 seems like a friendly, round number. (Thanks, Letterman!) Don’t let these happen to you!

Note that these suggestions assume we’re considering a native grass and forb meadow design installed on cleared/bare soil, starting from seed. Many of the suggestions would also apply to a project using plants or plugs, or a combination of seeds and plants. 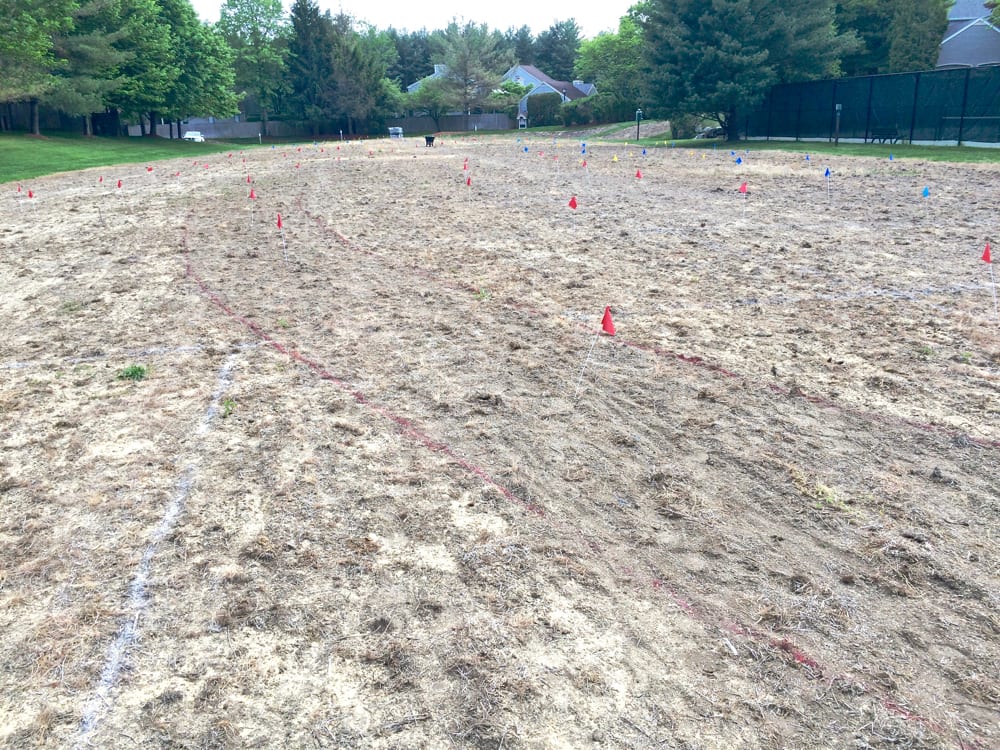 10. Don’t thoroughly communicate with the customer about the nature of a meadow.

Misconceptions or unrealistic expectations run rampant in some clients’ minds, and you want to root these out and deal with them early on. No, there won’t be a rainbow of colors two months after the seed is put down. Yes, it will look diﬀerent next year. No, it’s really not a good idea to use those pretty lavender ﬂowers you see in the wetland. No, ticks probably won’t be a problem.

Customer education should start with your ﬁrst discussions and continue throughout the design and planning process. Don’t assume that saying something once is enough. Some clients “get it,” but others may need ongoing attention and input. Show photos of meadows at diﬀerent stages, emphasize the time frame needed for things to develop, turn impatience into understanding of immutable realities.

9. Don’t do a thorough site analysis.

How do conditions vary across the site? Test soil separately in areas that might have diﬀerent characteristics. Are there low spots or slopes? Places where water accumulates and moisture lingers? Even subtle grade changes can result in signiﬁcantly diﬀerent soil moisture conditions and call for diﬀerent species. How will the property owner and visitors experience or use the site? What are the most important vantage points? 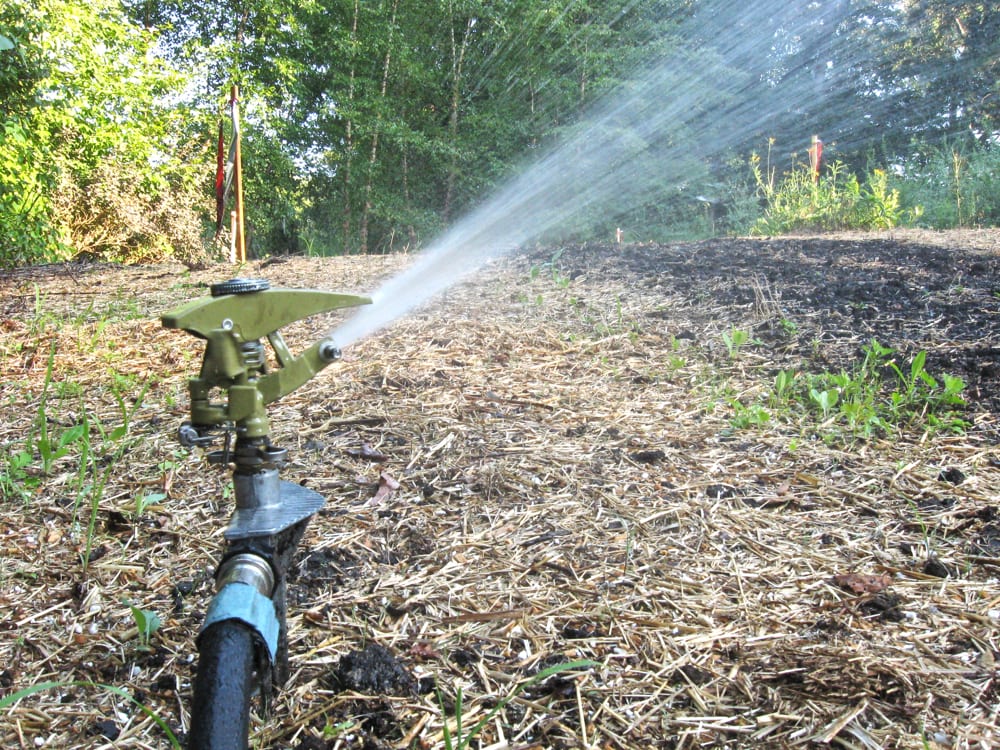 The need for supplemental irrigation for meadow establishment is decided on a case-by-case basis, subject to the vagaries of weather, site conditions, etc. Temporary systems with battery timers are fairly easy and inexpensive to set up.

8. Buy oﬀ-the-shelf seed mixes without understanding the nature of the species in the mix.

Pre-done supplier seed mixes can potentially save you a lot of work, but almost always comprise a raft of compromises. Even the more conscientiously assembled ones often aren’t site speciﬁc enough, and contain species that aren’t appropriate, and/or don’t contain plants you might want.

And, despite being mercilessly and justiﬁably criticized, the Meadow-in-a-Can concept lives on, zombie-like, resisting the permanent death it richly deserves. You can still buy Meadow in a Can Jr.™ which still contains exotic annuals and pays zero attention to long-term stability. And you’ll come across all kinds of poorly conceived mixes, even from suppliers that should know better.

To be sure, not all pre-done mixes are awful, but at best, they’re still going to be a generalized, imperfect ﬁt to your site and client imperatives. Learn the species, and design your own mix based on ecological function, desired aesthetics, and, yes, budget.

7. Include lots of non-native annuals.

Do not (!) succumb to client clamoring for near-instant results. Quick-to-establish annuals may produce some ﬂowers in the ﬁrst few months after seed is put down, but they compete with space and resources needed by the longer-term perennial species. If you are tempted, use a very small percentage and only in a selected, limited area. 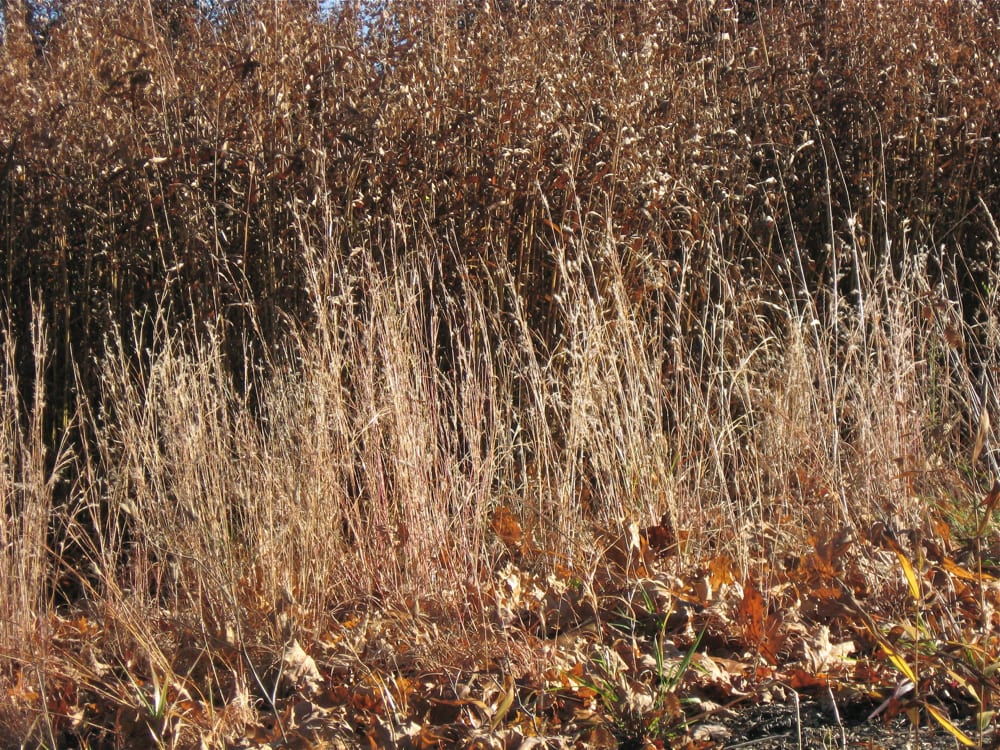 Grasses offer multi-season interest and provide magical fall color and texture – little bluestem against switchgrass shown here.  Even if your design includes forbs, be sure to include some grasses for structural diversity.

Grasses form the bones of a meadow, the structural background against which ﬂowering species are set oﬀ. Meadows lacking grasses somehow just don’t look right; they seem more like unwieldy ﬂower beds gone rogue. Meadows in which grasses dominate have their own simple, compelling beauty; a rich, textural matrix dancing and undulating giving a visual impression of the winds that move across the space. And many birds will make use of grass seeds as food well into winter.

5. Fail to consider the various niches ﬁlled by plants.

It is important that the meadow design addresses how the collection of species will interact and relate to each other and to the physical space they occupy. An important goal is to have the design species knit into a tight community that is stable and resists disturbance.

This means giving consideration to how plants will occupy space both above and below ground. Root diversity (tap, ﬁbrous, rhizomatous) and above-ground diversity of forms (taller/over-story, mid-layer, ground layer), help ensure adequate density and structural diversity to resist weed invasion and to remain stable over time. 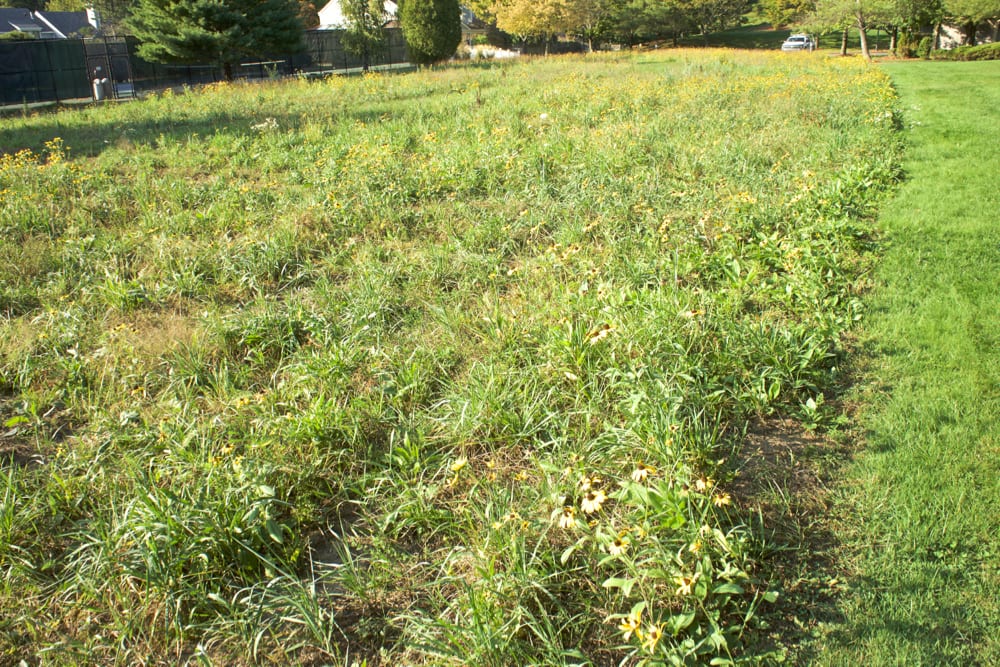 Four months after seeding. Most weeds or undesirable plants will grow more quickly than the design species, so selective mowing with a string trimmer during the first year is a good way to set back unwanted plants. Including some quick-growing species like Rudbeckia hirta will provide some first-season color.

Also pay attention to temporal niches. Seasonally, you want to have early, mid- and late-season species. On a successional time scale, you want plants that are early, quick-developing stabilizers (years 1 to 3), plants that occupy the middle-term (years 3 to 6 or so), and plants that will become the longer-term, durable perennials.

Given the cost of site preparation, installation time, maintenance after installation, etc., skimping on seed is, potentially, saving a dime and spending a dollar (or more) later. Generally, more species diversity is better than less (unless you’re aiming for a special eﬀect), and enough seed should be used to allow for good seedling density in each square foot of the project. 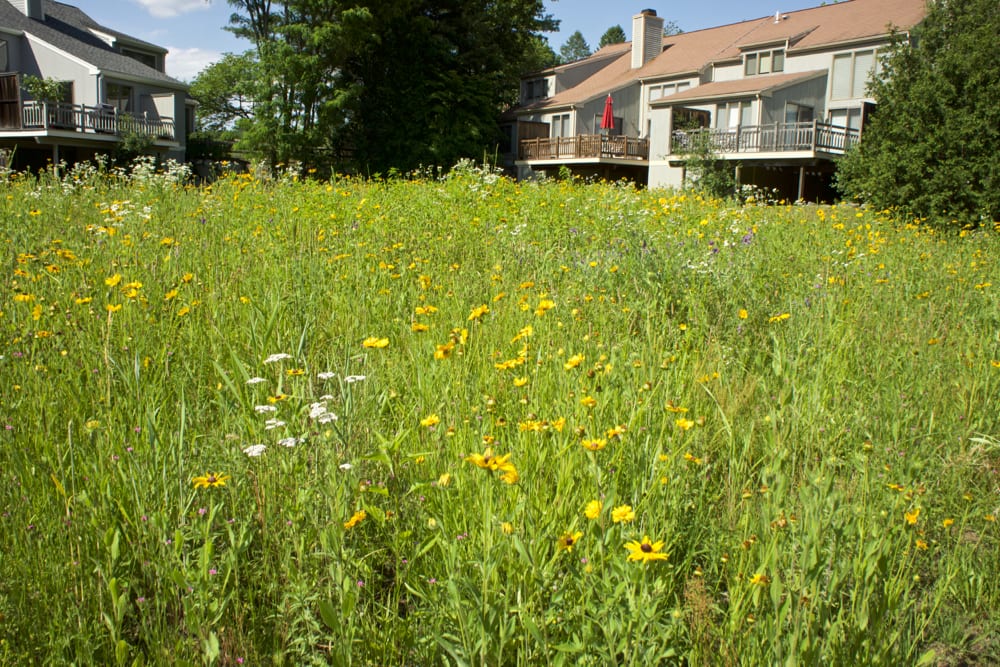 Thirteen months after seeding. A well diversified seed mix with sufficient early-to-establish species will result in a dense cover of desirable species capable of outcompeting most weedy invaders.

3. Till the soil prior to seeding.

It may be tempting to till to turn under existing vegetation. Resist the temptation. Tilling brings up seeds from below and deposits them on the surface, where they’ll happily germinate, now exposed to light. Then you’ll have to till those under. Which will bring more seeds to the surface. See the problem here? There’s rarely a good reason to till for site preparation. Other methods are almost always preferable.

2. Seed at the wrong time of year.

In temperate climates with real winters, the optimum windows to seed are late-spring and mid- to late-fall. There are pros and cons to each. Grasses – especially warm-season species – tend to have a better germination rate with spring sowing. Forbs that need cold stratiﬁcation will germinate the spring following fall seeding. Fall seeding will also make use of the winter/early spring freeze/thaw cycles to incorporate seed a bit into the soil. If the site has been kept open (clear) for a growing season, spring seeding allows for another round or two of controlling germination of unwanted plants for part of another growing season just before planting.

It’s important to note that fall seeding is a dormant seeding. That is, you want to seed late enough that no germination occurs that fall. In the Northeast, this probably means sometime into November. Very young, small seedlings that germinate in the fall will likely not be able to harden oﬀ enough to withstand winter cold.

And, *drumroll,* the number one way to point your meadow toward failure…

Many native plants are slow to establish. They may take weeks or months to even germinate, and months or years to mature enough to ﬂower. In the meantime, there are legions of other “ruderal” (pioneer) species – otherwise known as weeds – whose evolutionary mission in this world is to colonize and cover bare soil and make you wish you had chosen another line of work. Some of these will eventually succumb to your planted species, but others will haunt your project.

Which plants had been growing on your site and for how long will guide the level of pre-planting control you convince yourself to be adequate. The longer the better, within the limits of client tolerance. For old forage-crop ﬁelds, and any site where plants have been growing and dropping seed for years, a full growing season would be the minimum I’d feel comfortable with; preferably two. A season-and-half, well, okay. When converting turfgrass, you could potentially cheat this a little. Cover-cropping can have a role in pre-planting weed control.

Realize that once your design plants start growing, your options to control undesirable species become much more limited, time consuming, and, potentially, futile.

Getting back to number 10, given the relatively long, slow, development curve of a seeded meadow, some clients may want to “get started right away.” Agree to this at your peril. It’s better to walk away from a project when you recognize that acceding to a customer’s unrealistic demands or exceptions will likely result in a failed project.

Nick Novick plays in the dirt under the guise of Small Planet Landscaping based near Framingham, MA. (Hardly anyone has heard of Ashland.) Meadows are among the most satisfying of the selected landcare services he provides. After 15 years of doing this kind of work, he feels he might just kind of be getting the hang of it. He is a former ELA board member and ELA newsletter editor.

Facing Drought? Rip Up Your Lawn!
The Perennial Borders