A successful project requires careful consideration of design issues, keeping expectations in check, and an understanding of the ecological principles at play. Meadows can be an attractive and ecological landscape component on both large and small scales. They have the potential to displace at least some of the more mundane landscaping that is all too common (lawn, scattered shrubs surrounded by bark mulch), while lowering maintenance costs and providing essential habitat for birds and beleaguered pollinators. 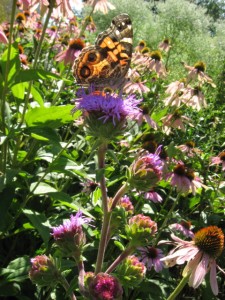 Yet, despite their increasing popularity—or, perhaps, in part, because of it—they continue to battle against unrealistic claims of “no maintenance,” quick and easy establishment, and an April-to-November display of vivid color. Meadow-in-a-Can may have had an early role in setting people up with these expectations, but inflated salesmanship continues on the pages of certain seed catalogs and magazines where glossy photos of fields of flowers with impossibly vivid colors lure unsuspecting readers. (Oh, and yes, Meadow-in-a-Can is still out there!)

Maintenance may be minimal compared to others types of landscape plantings, but an unmaintained meadow could become overwhelmed by undesired species, or, at the very least will begin to revert to woodland. Tossing some wildflower seed onto the lawn and retiring the mower is not likely to produce something attractive or lasting. And it’s difficult if not impossible to have all parts of a meadow continually lit up in color from last to first frost.

So, once we realize that there’s no such thing as “no maintenance,” and that you just can’t walk about and scatter some seed, we can begin to think about what comprises a successful meadow project.

First, what do we even mean by “meadow”? This is one of those words—like “natural,” “patriotic,” or “organic”—whose meaning can be nebulous or can vary depending on context and the intent of the person using it. “Meadow” can be a generic term for any sort of grassland, perhaps used for grazing, or hay production. These may contain native or non-native species, or a mixture. (The grasslands of the Midwest United States, now just a fraction of the size they once were, are composed of native, tall grasses, and are generally referred to as “Prairies.”) To some, a meadow may also just be an unmowed lawn area or a neglected flower bed. 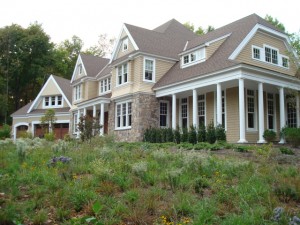 Even as designed and installed landscape features, people may have different notions of what a meadow is, ranging from a simple mix of fescue grasses mixed with some clover and, perhaps, a few other flowering plants, to something that resembles an old, English cottage garden, or even a minimally mowed lawn. Any of these can be appropriate for a particular setting, but, for our purposes, let’s define a meadow as a mix of native grasses and forbes (herbaceous, flowering plants) that—with a modicum of maintenance—will remain fairly stable over many years.

In ecological terms, this definition of a meadow represents an early, successional stage of vegetation development on a site; a process which, in the temperate regions, begins with bare soil and moves toward a woodland or forest. In this context, a main goal of meadow maintenance is arresting the successional process to eliminate incursions of woody plants.

But a successful meadow really begins in the design stages. As with any landscape design project, a thorough site analysis is the basis for a successful project design. Both physical and environmental conditions such as sun exposure and soil moisture and texture, as well as functional and aesthetic considerations need to be noted and taken into account. Obviously, plants need to be chosen with needs matching the growing conditions of the site. Choices can be made from plant communities which grow in, say, open sunny areas with well-drained soil, shady woodland edges or open tree groves, river or pond edges that stay relatively wet, and so on.

But beyond that, there are considerations for plant choices that need to be kept in mind for the meadow to sustain itself well over time. To fully fill the above-ground space, plants of different heights should be blended to provide a “canopy,” a mid-height layer, and a ground layer. The same attention should be given to below-ground space. Some plants have shallower surface roots, others deeper, tap roots. Choosing a blend of plants that fully fills the above- and below-ground spaces will help to ensure a meadow with long-term stability that resists incursions of undesirable species. 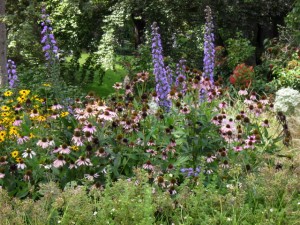 It’s also necessary to fill the time “space.” Select a mix of species that grow quickly and cover at least some part of the bare ground, some that develop and mature in a one- to five-year time period, and others that take longer to develop, but which are more persistent and long-lasting.

The vigor or aggressiveness of the plants is yet another important factor. Generally, plants with similar competitive levels should be grouped together. Aggressive, rhizomatous plants such as Monarda or certain of the goldenrods, can quickly dominate a planting if they are matched with more slowly growing, clump-forming species.

It’s not likely you’ll find any pre-blended mixes that meet these requirements, are fully suited to your particular site, and meet the aesthetic preferences of the client or property owner. Even mixes which avoid the worst mistakes of excessive amounts of garish, exotic annual flowers often lack the diversity needed for sustainability. For maximum flexibility, select and blend specific plants in the the right quantities based on the needs and conditions presented by each project.

Further refinements may be needed depending on the intent of the design or demands of the client or site. In certain restoration contexts, only regionally native plants may be appropriate. Perhaps the area will receive minimal maintenance, even less than the annual mowing and occasional weed control that most meadows require. Maybe there are functional considerations like height limitations to avoid obstructing sight-lines or views.

If you’ve done a careful site evaluation and have put together a diverse, balanced plant selection, the biggest potential for problems or outright failure lies in inadequate site preparation. Competition from undesirable or weedy plants can overwhelm small meadow seedlings. The best results will be obtained on sites that have been cleared to bare ground, especially if beginning with seeds instead of plants. 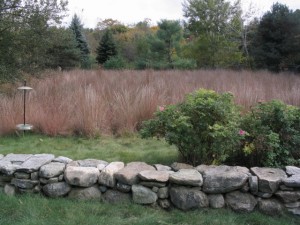 The longer that the site can be kept cleared of vegetation, the less the weed pressure will be during the first few years of the meadow. On sites where a variety of plants had been growing and going to seed for many years, there will be a huge seed bank that could take a number of years to deplete. Mowed areas, such as lawns, may have a much smaller seed bank, and potentially could be seeded or planted soon after killing off the vegetation. Control options include herbicides, smothering, cover cropping, mowing, repeated tilling, or some combination of these, depending on specific site conditions. Tilling is likely to be the least effective method, as it will bring new seeds to the surface on each tilling pass.

Once the meadow is seeded or planted, especially with a mixed planting of grasses and forbes, weed control becomes more difficult and less effective. Resist any urge or pressure to do the installation if you don’t think the degree of control is adequate. This can be a difficult sell, since, if you’re starting from seed, you’re already three years away from something that will begin to resemble a meadow, and now you’re going to add another year or two of keeping the site clear or in a cover crop. But, as Neil Diboll, owner of Prairie Nursery is fond of saying, “You have the choice between a quick failure and a slow success.” You will be sorry if you plant too soon.

Maintenance is the most critical for the first few years after installation, especially if the pre-planting site preparation was less than ideal. Mowing once a year, preferably in early spring, eliminates tree seedlings, and functions as the ecological disturbance which arrests succession toward woodland. If the cut material is removed, there is the further benefit of opening the ground to the sun which gives a boost to the warm-season plants. Burning substitutes for mowing, and is best done every few years, but finding qualified, local burn professionals and clearing the burn with local fire officials can be challenging in parts of the country not accustomed to the practice.

Besides mowing, occasional spot weed control may be needed for species which, left unchecked, could begin to out-compete desirable plants. Most of the time, this is needed only a few times per year. 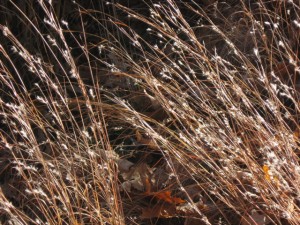 Unlike most maintained landscapes which are managed to look exactly the same from year to year, meadows can be dynamic and shifting. Plants may show up in your meadow that weren’t installed or expected, but which you may decide to leave. Some of the short-term species in the mix may fade out. Plants may shift their location over time, in response to site conditions. It’s important for everyone involved in the project to recognize that this is one of many ways that natural landscaping in general, and meadows in particular, are different from most of the landscaping that people are used to. A key to project success and acceptance is having landscaping professionals that are familiar with the criteria for a successful project and clients who understand the nature and dynamics of natural plantings.