By Maureen Sundberg on July 16, 2018 in Landscape Design

by Marietta and Ernie O’Byrne

Taken from A Tapestry Garden© Copyright 2018 by Marietta and Ernie O’Byrne. Published by Timber Press, Portland, OR. Used by permission of the publisher. All rights reserved.

The perennial borders are not directly visible from the windows of the house, but come as a surprise when taking the path from the back door. An almost straight path of flat, irregular stepping stones runs through the center of two of the perennial borders, and that path is crossed by two other paths at right angles. The view lines are laid out in a formal pattern bisected by round stone mosaics at the axis of the paths. When standing at the end of the paths we enjoy a long view line of flowering perennials from late spring through fall. 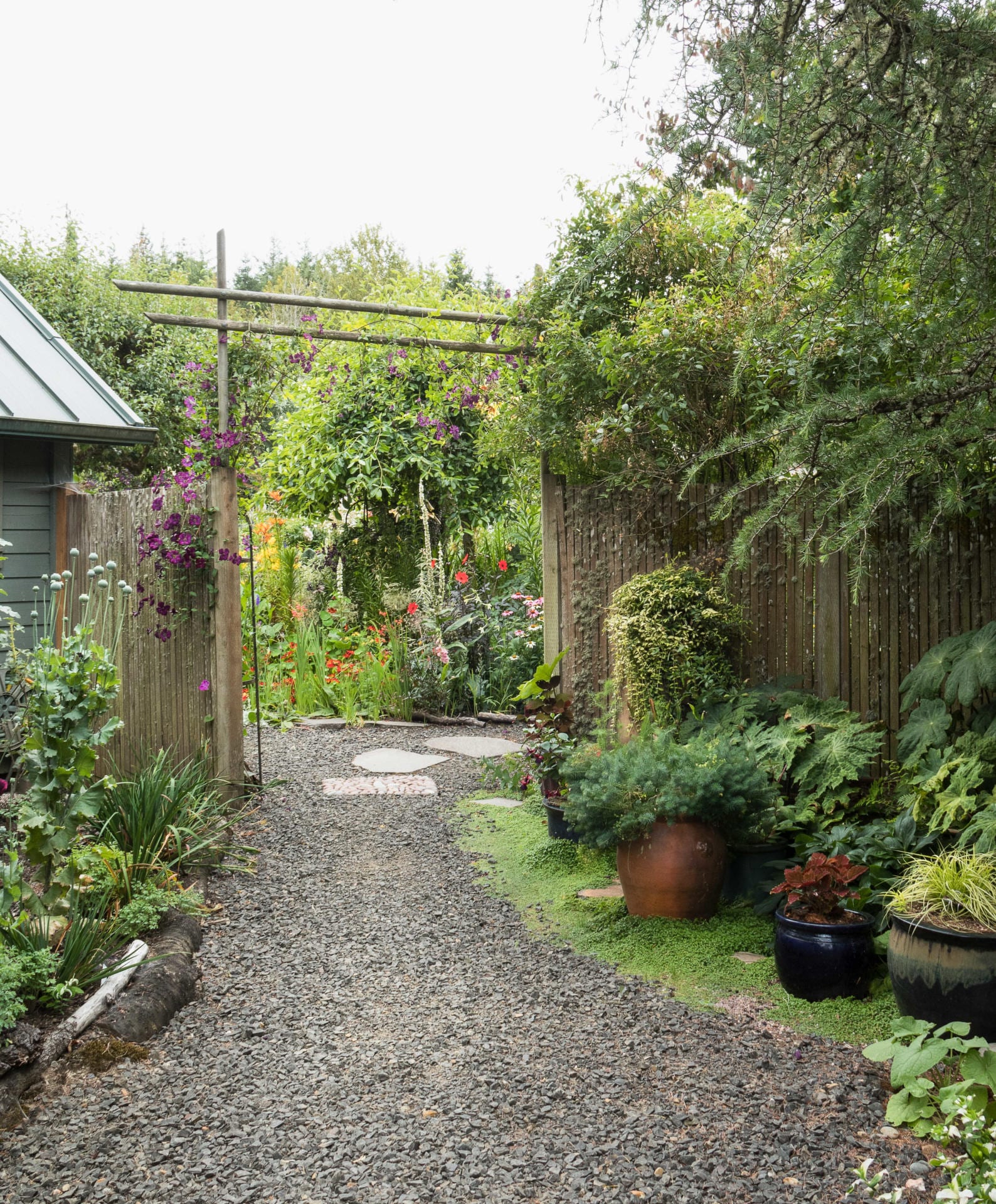 Side entry to the perennial borders. Photo: Doreen Wynja

But what about winter when perennials are dormant and the beds mostly empty? We then realized that some woody plants could enhance the borders year-round and also lessen the high maintenance somewhat when old age creeps up on us. Someday we might want to ease off a bit on the intense care required for a sunny perennial border. So we planted some small decorative trees, or at least they were small at planting time, and now have grown larger than their labels had us believe at purchase time. The elegant Cornus controversa ‘Variegata’ with its tiered branches, aptly called wedding cake tree, now shades a once sunny bed. Over the years we have adjusted the perennial plantings accordingly.

These borders are meant to be colorful from spring until frost, which often in the Pacific Northwest does not arrive until November, or even December. The beds on the north side of the path glow in summer with vivid oranges, yellows, and reds of crocosmias, dark-leaved red and yellow dahlias, heliopsis and goldenrod, with yellow and orange lilies sprinkled in between. Geranium psilostemon and blue Geranium ‘Rozanne’ as well as a dark-purple phlox offer contrast, and a few white lilies as well as the white, fragrant Hydrangea angustipetala ‘MonLong Shou’ and white Clematis recta give a bit of visual relief. 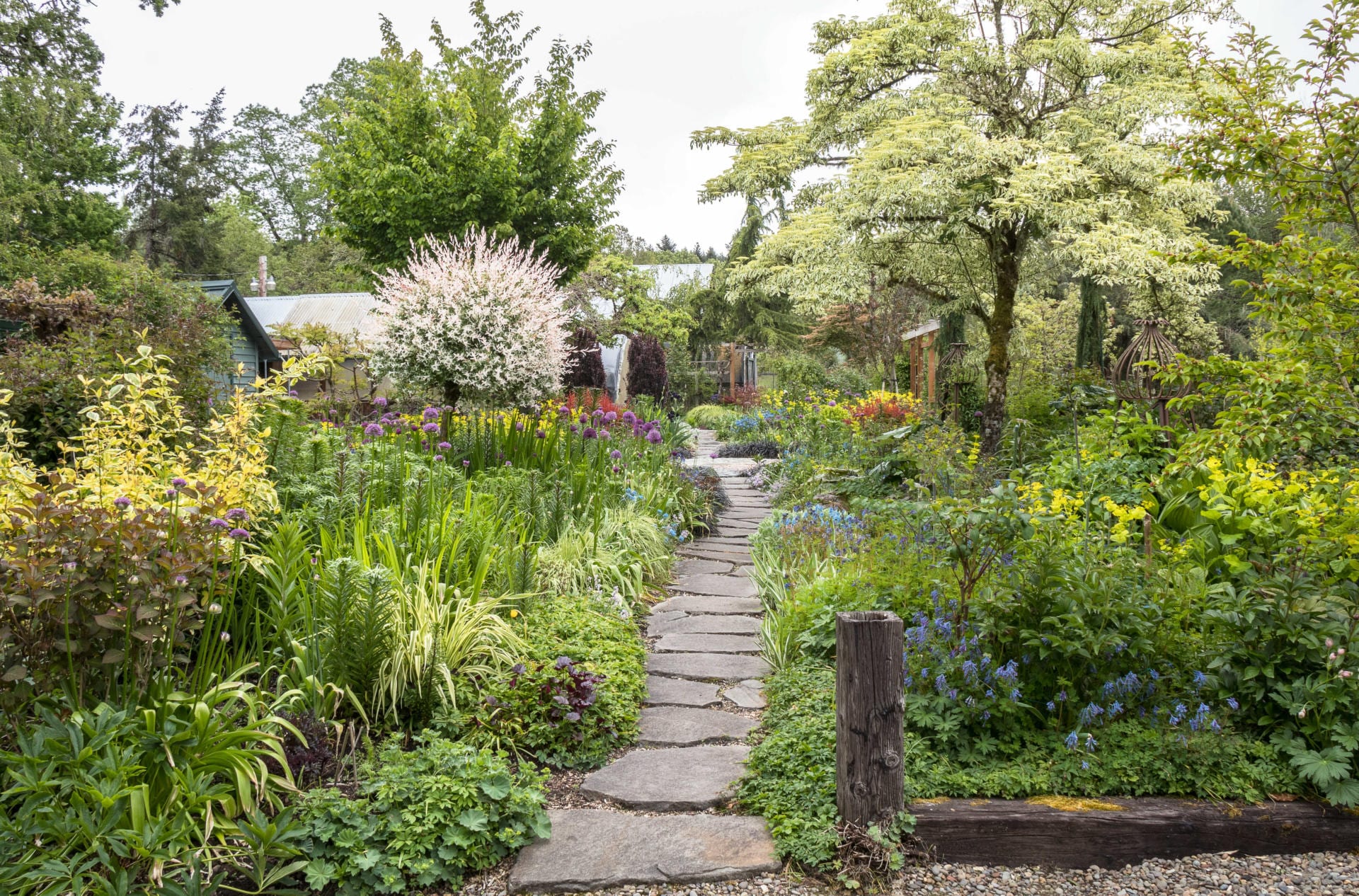 View of the entrance to the perennial borders in spring. Photo: Doreen Wynja

One end of the border is edged with weeping yellow Japanese forest grass (Hakonechloa macra ‘All Gold’), and the other end is occupied with black mondo grass. Our favorite green and yellow variegated Cornus sericea ‘Hedgerows Gold’ and sumac (Rhus typhina ‘Tiger Eyes’) add even more golden yellow in a shrubby way. A big hardy banana (Musa basjoo) dominates it all with its enormous fan-like leaves on stems to 15 feet. Two clipped, variegated Salix integra ‘Hakuro-nishiki’ on standards add pizzazz. There is plenty of lush, soothing green in the form of two trees grown for fall color, Parrotia persica ‘Vanessa’ and an umbrella-shaped black tupelo, Nyssa sylvatica ‘Autumn Cascades’, to balance out all the wild colors. I find the hot colors very stimulating and so do the hummingbirds that fly between the red and orange flowers like little jet fighters. 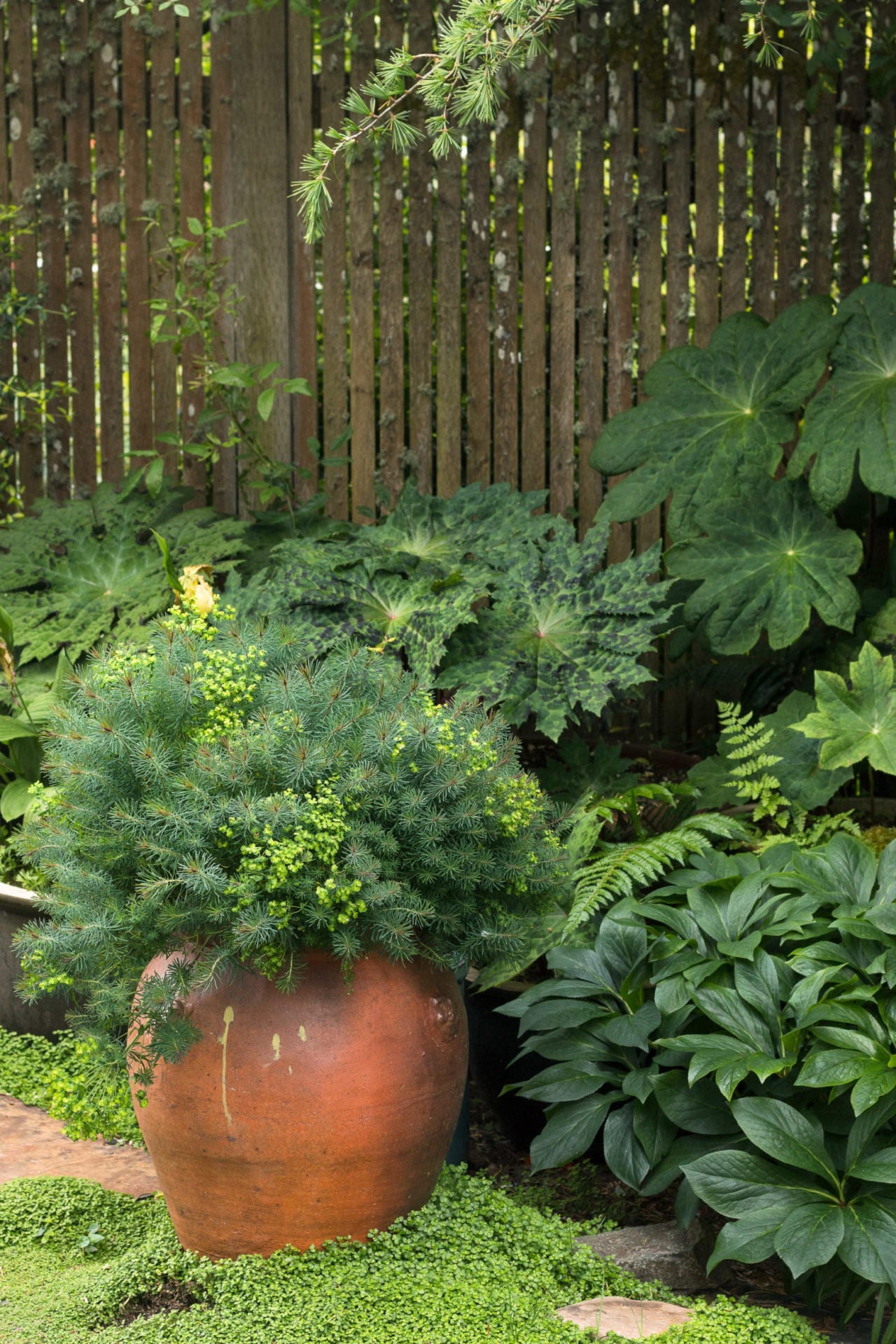 Euphorbia cyparissias, best kept in a container because it can become very invasive. Photo: Doreen Wynja

Look to the south of the path and all is restful under the shade of the Cornus controversa ‘Variegata’, echoing, with its tiered variegated foliage, the two willows (Salix integra ‘Hakuro-nishiki’) across from it. In the shade of the dogwood and a ‘Sekkan-sugi’ cryptomeria, live shade perennials with flowers of softer tones and hues among ferns and podophyllums. The tango next door has been toned down to a minuet. Astrantias mingle with pink Thalictrum rochebrunnianum, Pimpinella major ‘Rosea’, and white Gillenia trifoliata. Blue phlox and delphiniums grow in the sunnier parts of the border with soft pink dahlias and blue Clematis ‘Rhapsody’. In spring as well as in fall, the leaves of two of the red-stemmed Hydrangea macrophylla ‘Lady in Red’ will take on a copper-red hue while the flowers bloom a soft pink in our soil. 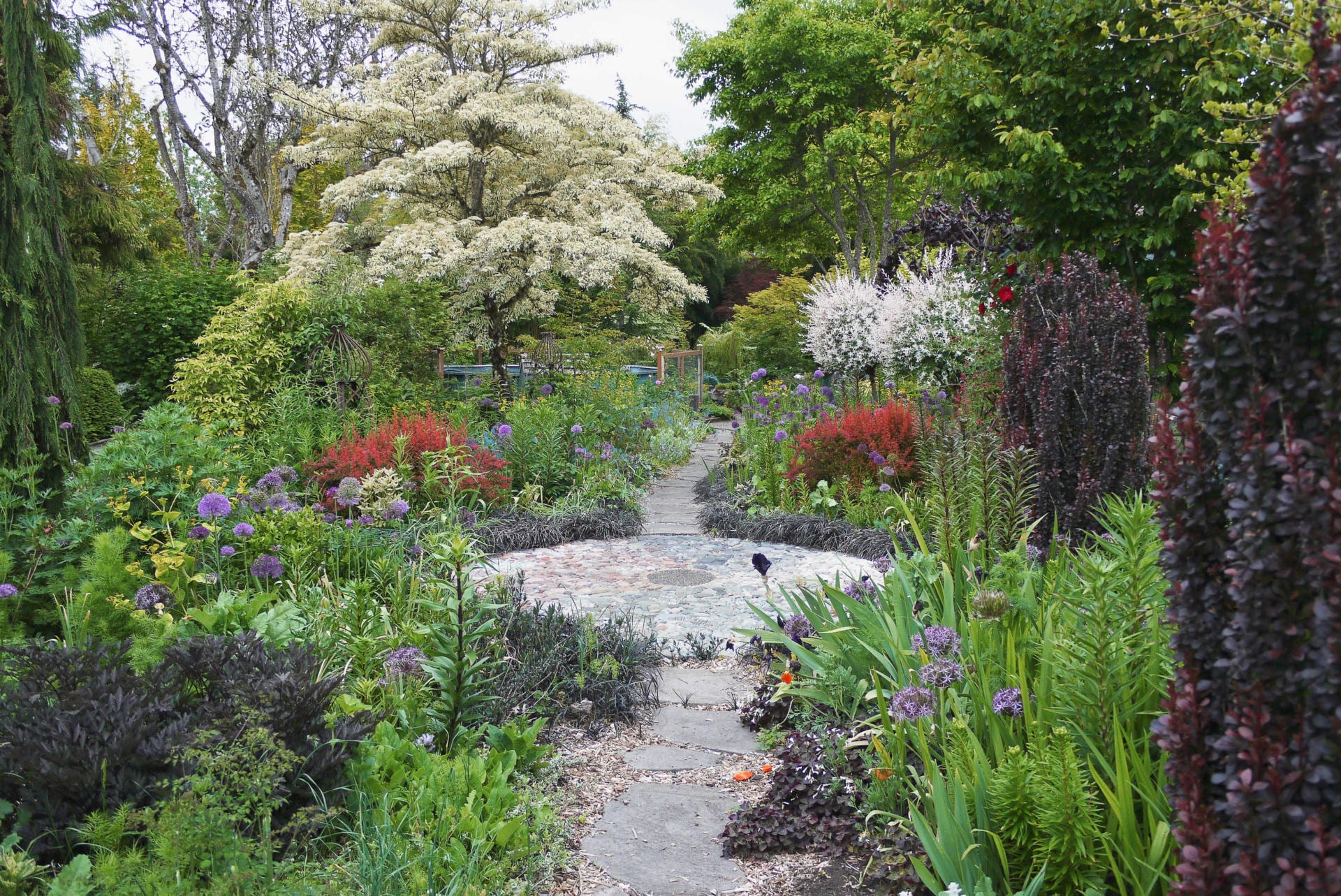 Center of the perennial garden with a pebble mosaic by Portland artist Jeffrey Bale. Photo: Marietta and Ernie O’Byrne

The five perennial beds encompass about 2,200 square feet and are roughly rectangular. I say roughly because even though they are basically a formal design, my nature cannot easily accommodate exactness. I meander on a line between order and disorder and feel quite comfortable on it. Harmonious disorder is my comfort zone. So, the paths and bed edges also meander a bit and are only almost straight with slight sinuous bends.

The beds color in spring with innumerable dark blue chionodoxa, sky blue Scilla hispanica, and many varieties of Anemone nemorosa. Sadly, I long ago had to abandon the idea of tulips and crocus. Hundreds or thousands of voles from the surrounding meadows have found a better meal than grass seeds in our garden. Many bulbs do not even last through one flowering. We had to learn what voles find appetizing and what they eschew. Sometimes their favorite is a certain strain within the same species, usually the rarer or more expensive one, it seems. These little fat rodents are quite discerning. So, we grow what we can and have learned not to lose our temper (except now and then). In May the glorious round balls of flowering onions appear. Pinks, blues, violets, and whites of all heights and sizes create a joyous spring dance before the heavyweights of summer appear. 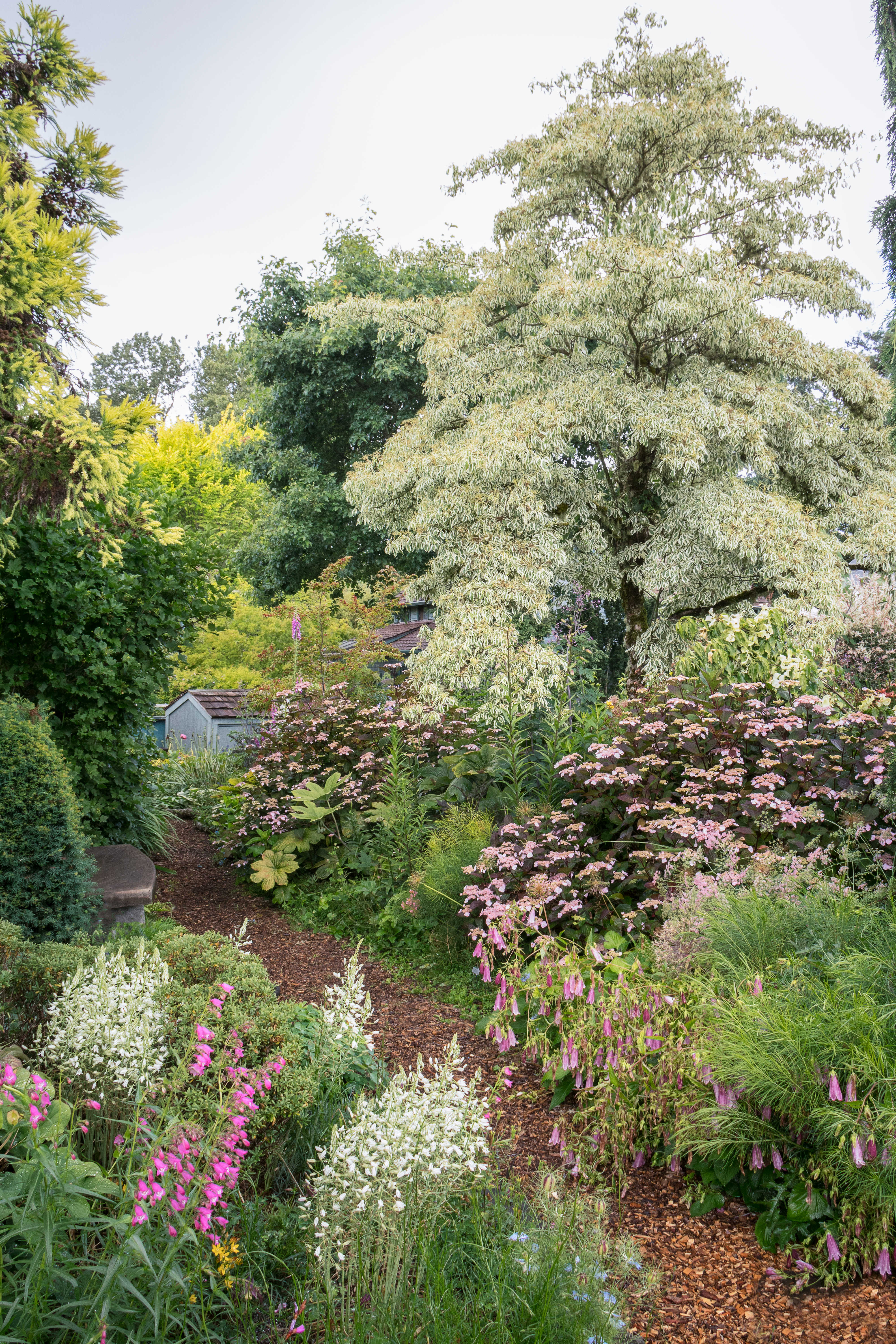 We were enticed by a photo of a glowing, acid yellow, bracted umbellifer Smyrnium perfoliatum in Christopher Lloyd’s Flower Garden book. We set about obtaining seed. Smyrnium perfoliatum is a monocarpic tuber. It takes three or more years to bloom from seed. It sets plentiful black seed and then dies. The trick is to sow some seed each year initially to stagger flowering, but then watch out! It self-sows with abandon, and like Anthriscus sylvestris ‘Ravenswing’, needs careful removal after flowering before seeds are completely ripe and drop. In the first year, a pair of cotyledons appears, producing a tiny white tuber. In the following year or two, it looks more like a celery leaf, dying down by midsummer. Then comes the glorious flowering year. It is treasured by flower arrangers and gardeners alike.

Over the many years the alliums have multiplied in the rich compost to such an extent that they are now neck to neck. Voles apparently do not care for onions. We cut or pull out the foliage as soon as it starts browning and leave only the flowering stalk standing. This also gives the summer blooming perennials just emerging breathing room to push through the field of alliums. At this point we set up gridded, grow-through supports of various dimensions for those flowering plants we know would topple later on. (Some plants that can benefit from support are: baptisia, Actaea matsumurae ‘White Pearl’ (syn. Cimicifuga ‘The Pearl’), dahlia, delphinium, Geranium ‘Rozanne’, gillenia, large geraniums, phlox, tall asters, and veronicastrum.) As soon as the plant tips grow through the supports, the green painted supports are no longer visible and the plant looks as if it stands gracefully on its own. 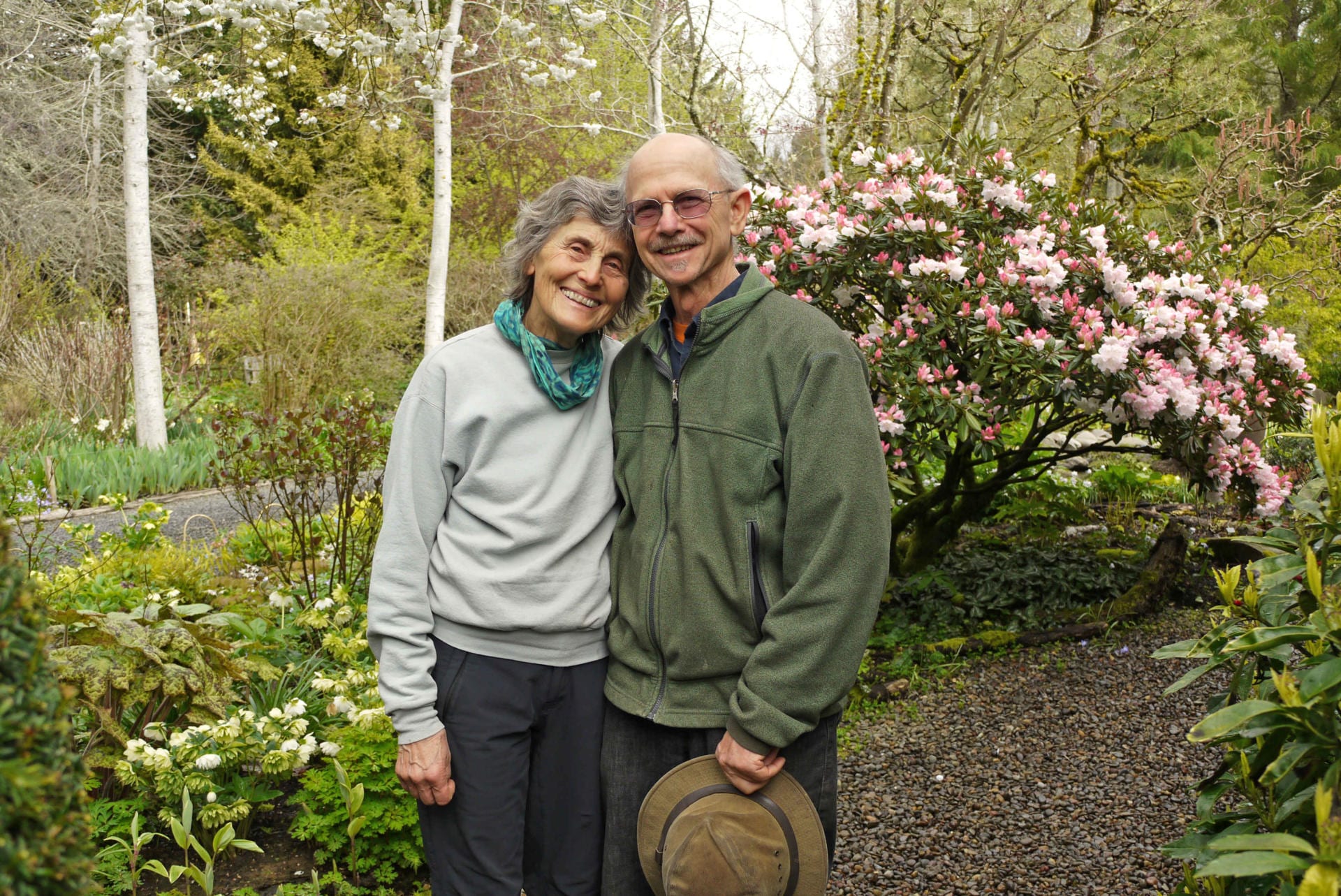 Marietta and Ernie O’Byrne are the owners of Northwest Garden Nursery in Eugene, OR. Formerly a retail nursery specializing in unusual plants, it is now a wholesale nurser specializing in hellebores. With a worldwide network of customers, the nursery has earned a reputation for producing some of the finest hellebore hybrids available today. The O’Byrnes’ garden is renowned for its stunning combinations and variety of habitats, which allow Ernie and Marietta to experiment with a huge palette of plants. Marietta speaks regularly to audiences of passionate gardeners and has writen for a number of gardening publications. You can visit the nursery’s website at www.northwestgardennursery.com.

Top Ten Ways to Screw Up an Installed Meadow
Drought Tolerant Container Gardens, Beyond the Traditional