Many researchers and ecological restorationists have identified a constellation of traits or characteristics that better define what the term ‘invasive plant’ really means. These traits are shared by most exotic invasive plant species with some species expressing more of these traits than others.

To better understand invasive plant behavior expressed by these species, I will review the eight ecological traits that were presented by Boston area ecological restorationist Josh Ellsworth at the Ecological Landscape Alliance’s 2005 Winter Conference, Marlborough, Massachusetts.

According to Ellsworth, the eight eco-traits or characteristics have been categorized for a better description of exotic invasive plant behavior. Keep in mind that some of these plants share more of these invasive traits than others. Where possible, I have taken the liberty to add more examples to raise awareness for the novice.

Trait 1: High seed production and good seed viability. According to Ellsworth, the exotic invasive Asiatic bittersweet vine (Celastrus orbiculatus) produces a tremendous amount of seed annually. Only two-thirds of the seed crop will actually germinate, but the sheer number of seeds produced ensures that this species will spread rapidly. 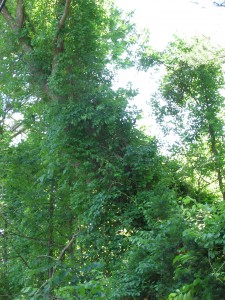 Several privet (Ligustrum species) are also prolific seed producers as well as common buckthorn (Rhamnus cathartica) and glossy buckthorn (Frangula alnus = R. frangula). However, not all seeds germinate as soon as they contact soil. Delayed germination may occur, and according to Ellsworth, such seed becomes a member of the seed bank. The term “seed bank” refers to the collection of dormant seeds in the soil of an infested site that is capable of germinating at a later time when environmental conditions are right. Seed bank seeds that are capable of delayed germination a year later or more exhibit high seed viability. 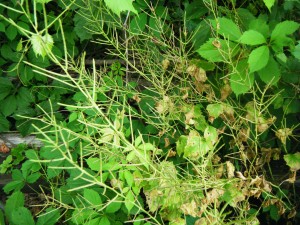 The above mentioned species, along with garlic mustard (Alliaria officinalis), exhibit good seed viability. Other, not mentioned exotic invasive species also exhibit this trait. As a side note, there are many weed seeds typical of agricultural soils that exhibit seed viability from five to forty years depending on soil type.
. 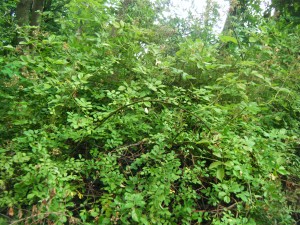 Trait 3: Sexual reproduction breeding system. Most exotic invasive plants reproduce sexually. Sexual reproduction involves pollen produced by a male (staminate) flower contacting and fertilizing a female (pistillate) flower resulting in the production of seed. Sexual reproduction occurs two different ways depending on the location of the reproductive organs on the plants in question. The first way is referred to as dioecious reproduction where male and female flowers are located on separate sex plants (e.g. Asiatic bittersweet vine). If you see a single Asiatic bittersweet vine in the woods that has not produced berries it could be either a lone male or female vine just waiting to “hook up” with the opposite sex. Only the female vine produces fruit and seed.

Another monoecious arrangement is when both male and female reproductive parts are located (consolidated) in the same flower and always on the same plant. When this arrangement occurs the resulting flower is referred to as being perfect (i.e. perfect flowers in botanical literature are occasionally referred to as bisexual or hermaphroditic). Glossy buckthorn has perfect flowers.

Exotic invasive plants that are either monoecious or have perfect flowers can self – fertilize, producing fruit and seed on the same plant. Therefore, invasive plants expressing the monoecious breeding system only need a single plant to start an invasion! This is one of the major reasons why unmanaged monoecious exotic invasive plant populations are so successful at rapidly colonizing vulnerable new landscapes and larger ecosystems. 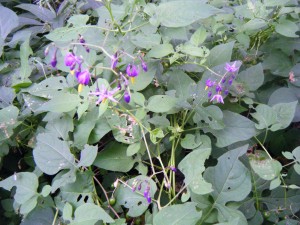 When landscapes support such populations for decades it becomes very costly to control them, especially to reduce the population by 90%. Ellsworth states that “you should always think about seeds when undertaking an exotic invasive plant control project.” You should equally consider the species breeding system. In other words, no matter what exotic invasive species you are faced with you need to be aware of its breeding system and at what point in its life cycle it produces flowers, fruit and seed.

Many exotic invasive woody plants sprout or send up shoots after the main stem or branch has been cut or broken. Some species such as Asiatic bittersweet vine, and black swallow-wort (Vincetoxicum nigrum) can send up new vine shoots from large existing roots (e.g. root sprouts). The cut stumps of glossy buckthorn, Asiatic bittersweet vine, multi-flora rose, common buckthorn, Norway maple (Acer platanoides), and others will all send up new shoots if an appropriate herbicide is not readily applied. 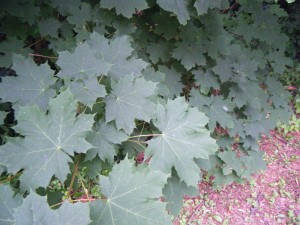 Norway Maple saplings can out-compete most nearby groundcover plants

I have observed glossy buckthorn producing new shoots and roots from branch tips held to the ground by fallen branches of large over story trees. However, you should keep in mind that any woody exotic invasive plant exhibiting the monoecious breeding system, will give rise to flowers on new shoots (i.e. asexual reproduction) that will self – fertilize and produce more berries (seeds) than the original uncut stem. A planned management method of either herbicide application or repeated mowing or cutting over many years is necessary for optimal control.

Trait 5: Predator avoidance and / or deterrence. There are some exotic invasive plants which have physical structures such as thorns, or tiny sharp spines that deter grazing animals and humans from touching them. Ellsworth mentioned that Japanese barberry (Berberis thunbergii) is the most common landscape example that comes to mind.

I have seen Japanese barberry growing over vast areas of spruce – fir, pine forest in Acadia Park, Maine. It escaped cultivation years ago and is not fed upon by deer and other grazing wild animals. 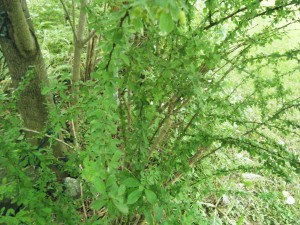 Ellsworth and other practitioners warn of specific chemicals produced by some exotic invasive plants that also make them unpalatable to plant feeding animals. For example, Ellsworth stated that Japanese or Asian stiltgrass (Microstegium vimineum) and garlic mustard have unpalatable compounds repelling white – tailed deer (Odocoileus virginianus) and other grazing animals.

Trait 6: The timing of leaf out and of leaf loss. There are several exotic invasive plants that have an edge over our native plants by leafing out earlier in the spring and holding onto their leaves a little longer in the fall. This trait allows certain invasive plants to carry out photosynthesis longer than most native plant species, allowing more time for the invasive plants to store a greater quantity of carbohydrates in their roots for more efficient growth and development when environmental conditions are right. Glossy buckthorn, honeysuckles, garlic mustard and Japanese barberry are a few species that exhibit this trait. 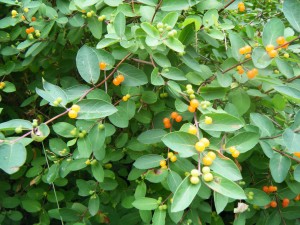 Trait 7: Shade / Sun tolerance. There are some exotic invasive plants that exhibit the ability to germinate and become established in shade. This is known as being shade tolerant and it is an extremely good trait to have when competing with our native plants. Shade tolerant species such as glossy buckthorn and Asiatic bittersweet vine will not produce a large increase in growth or seed on a yearly basis when growing under shady conditions, but will not necessarily succumb to shade as a limiting factor either. However, don’t be fooled; shade – tolerant species can grow rapidly when shade opens up due to over story branch die-back, breakage, or fallen trees. Take notice of shade – tolerant species when studying and observing exotic invasive plants. 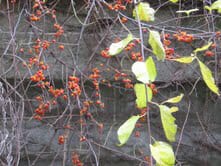 Trait 8: Time of year of fruiting. Different exotic invasive plants set fruit at different times during the growing season. They all do not set fruit and seed in the fall. Ellsworth stressed that to get the maximum control for the least amount of effort one should observe when your targeted exotic invasive plant sets fruit (seed) and remove that plant before seeds mature. He strongly suggested that to focus control efforts in July for glossy buckthorn and black swallow – wort; August for autumn olive (Elaeagnus umbellate) and purple loosestrife (Lythrum salicaria) and September for Asiatic bittersweet vine.

Note: This article is a first excerpt of a larger article being written for publication this fall for the ELA newsletter.

Bruce Wenning is an ELA Board member and publications committee chair. He is a horticulturist at The Country Club, Brookline, MA where he continues his battle with exotic invasive plant species.