By Maureen Sundberg on June 15, 2016 in Invasive Plants 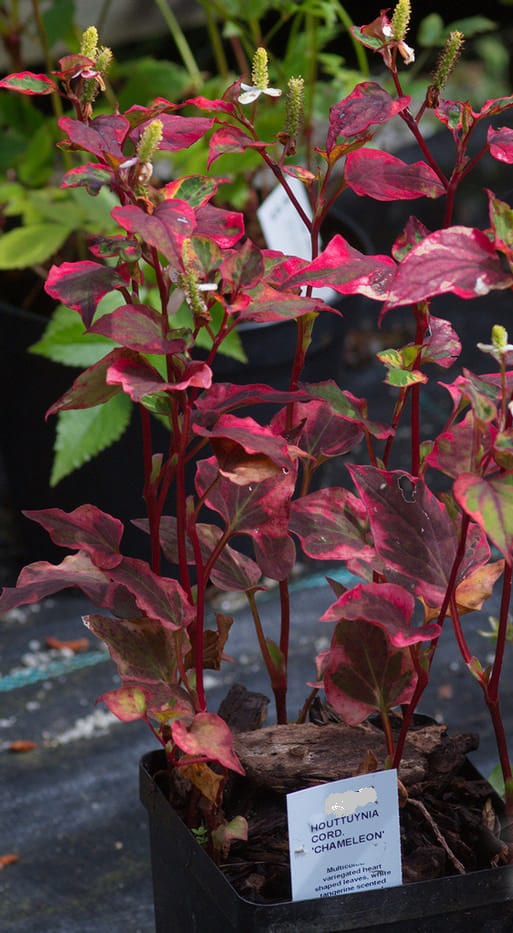 Houttuynia Cordata is a pretty but aggressive plant.

Purchased as an ornamental for a water feature in the late ‘80s, a single pot of Houttuynia cordata has turned a perennial garden into an invasive nightmare. An attractive plant, Houttuynia cordata is a creeping groundcover that can reach up to 24” in height and spreads by rhizomes. The stems are green or shades of red and can be either smooth or pubescent. The leaves are usually heart-shaped but with a lot of variability. The flowers are white with petal-like bracts at the base.

I introduced Houttunynia into a small, above-ground pond that had to be emptied each winter in my Zone 5 climate. The first two winters, I heeled the plant into a perennial bed; the third spring, it didn’t emerge and appeared to have succumbed to the harsh winter. In my landscape, a lot of plants just disappear. Apparently gone, this one was soon forgotten. 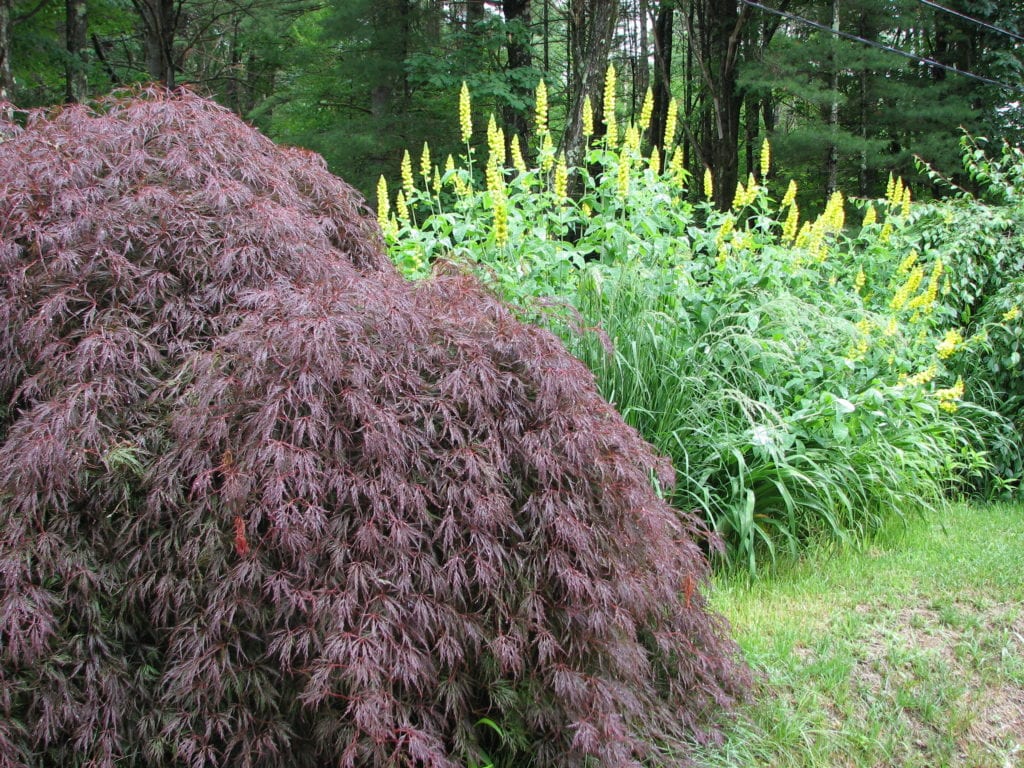 Before the return of Houttuynia cordata, a front bed featured a red maple tree and thriving thermopsis caroliniana.

Fast forward to 2007, when I removed the large oak tree from my front yard in order to make way for a garage. I relocated the few shade plants that remained under the oak, and I expanded the now-sunny perennial bed, rejuvenating it with (compost-rich) loam. Some combination of rototilling, improved soil conditions, or full sun, reawakened long-forgotten roots of the Houttuynia. In the spring of 2012, I was weeding a section of Thermopsis caroliniana and spotted the foliage of an unfamiliar plant. On closer inspection, the very familiar fragrance hit me (not in a good way), and I remembered the fishy scented plant. I was puzzled that it had come back to life after such a long hiatus, but I was pleasantly surprised that the attractive foliage had returned to my garden. How naïve of me.

To mix metaphors, when something seems too good to be true, you should look a gift horse in the mouth. Sadly, at that moment it didn’t occur to me to question the gift. Only later did I consider the genetics of a plant so insidious and bent on survival that it could lay dormant for more than two decades. 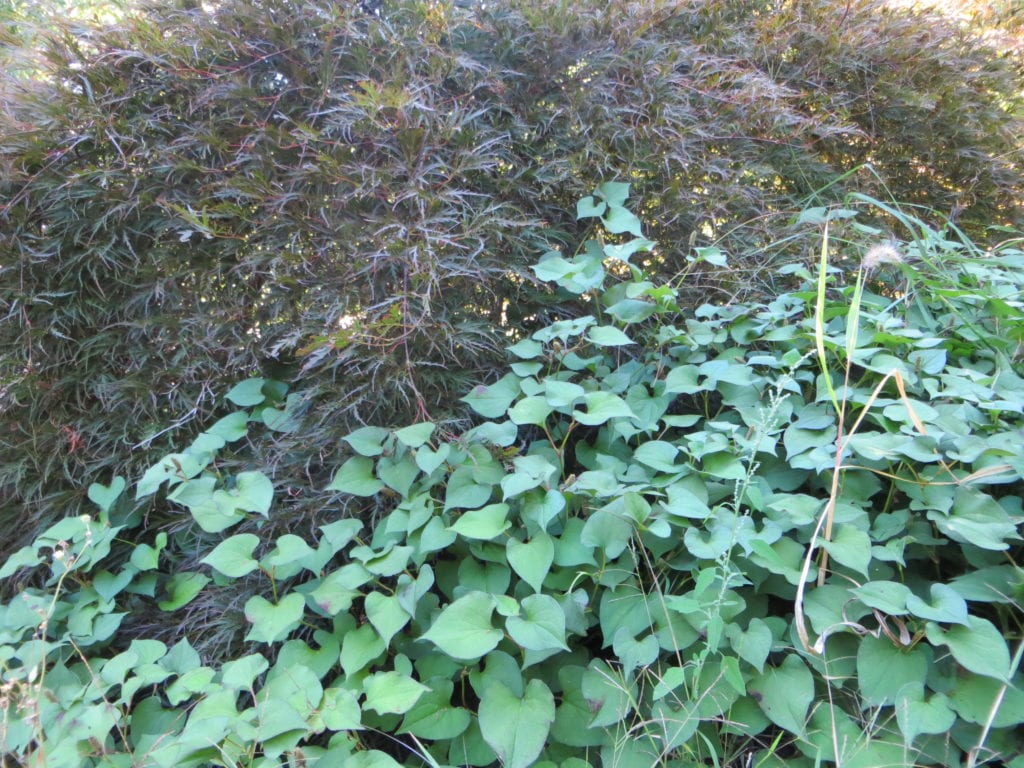 In two seasons, the single re-emergent Houttuynia grew to engulf an entire bed.

In the best of years, I have very limited time for gardening, and after a quick spring cleanup and weeding of the ornamental beds, my attention and time are spent in the vegetable garden. The ornamental landscape is then left on its own until the following spring. 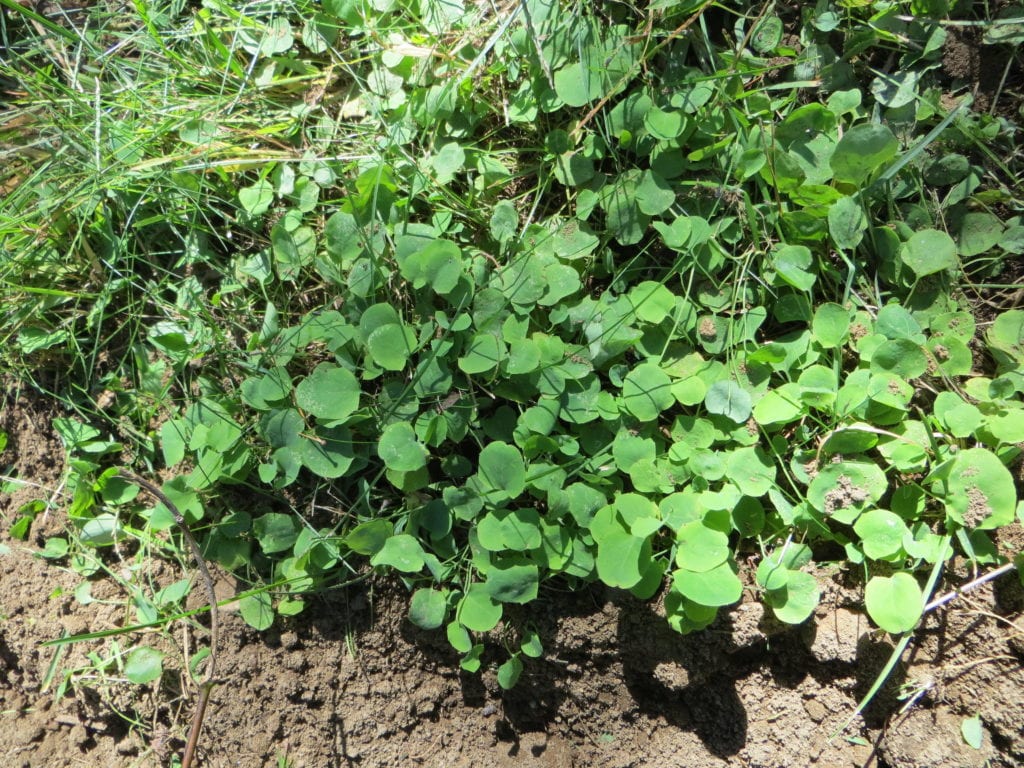 Once the Houttuynia gained a foothold, no other plants could compete.

Because most of the plants in the front bed are quite tall, I didn’t notice or even remember the Houttuynia until the following spring, 2013. I was pleased to see that it had wintered over and had grown into a nice-sized plant. It occurred to me that I should move it to a better location, but that had to wait for another day. The following spring I was surprised to see that the Houttuynia had spread toward the edge of the bed and more sun. Rather than concern for the distance it had traveled, I thought how clever that the plant had moved out of the shade. A more mindful gardener would have had red flags flying and would already be thinking “invasive.” Mindful gardener, I was not. By the end of the summer, the Houttuynia was marching onto and under the Japanese maple. This was trouble for sure, but with no time to address it (vegetable harvest was upon me), I made a mental note to look up removal strategies over the winter. 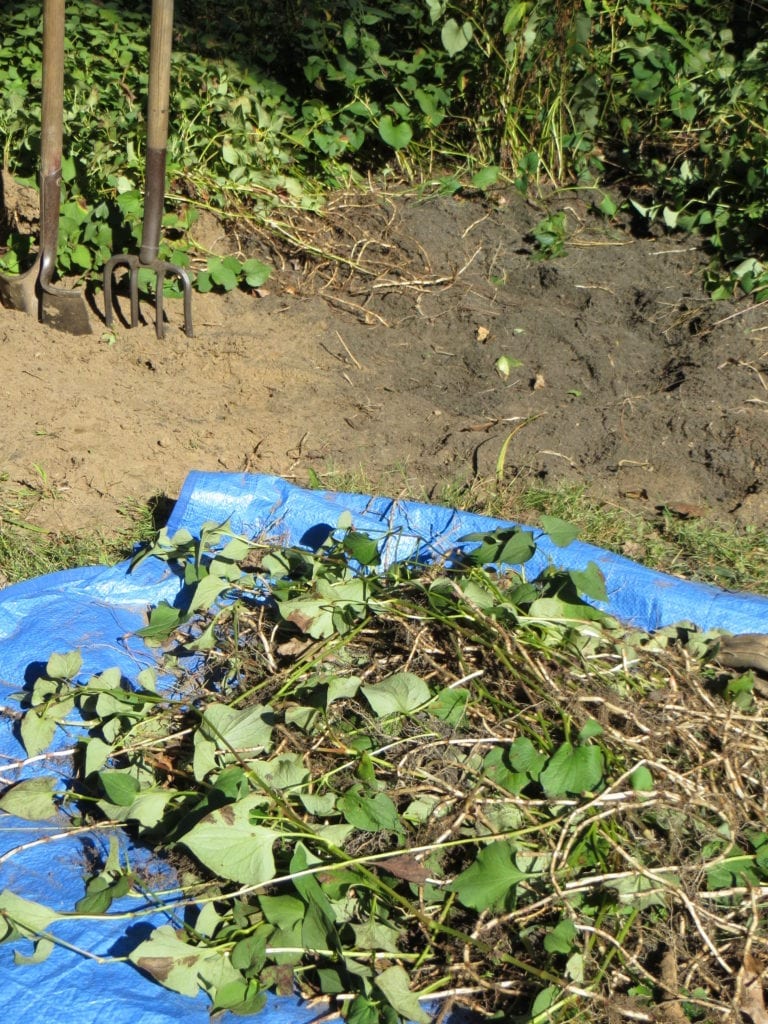 By the time my invasive removal began in earnest, very few other plants were present, and it was nearly impossible to separate roots.

As often happens, other priorities took precedence and the Houttuynia had two more seasons of unchecked invasion. I am reminded of the old saying, “A stitch in time saves nine.” If only I had taken a shovel and dug out that first tiny plant that re-emerged, what a different effort this would have been. Instead, just three years later in the fall of 2015, I started a major invasive removal project. With shovel and garden fork, I began to dig, intending to salvage most of the plants in the garden. The sad reality was that the invasion left very few plants healthy enough to justify the time required to pull apart and remove all Houttuynia roots. After several days of digging, I’d removed multiple wheelbarrow loads of Houttuynia roots from the bed and bagged them for incineration – the recommended disposal method. 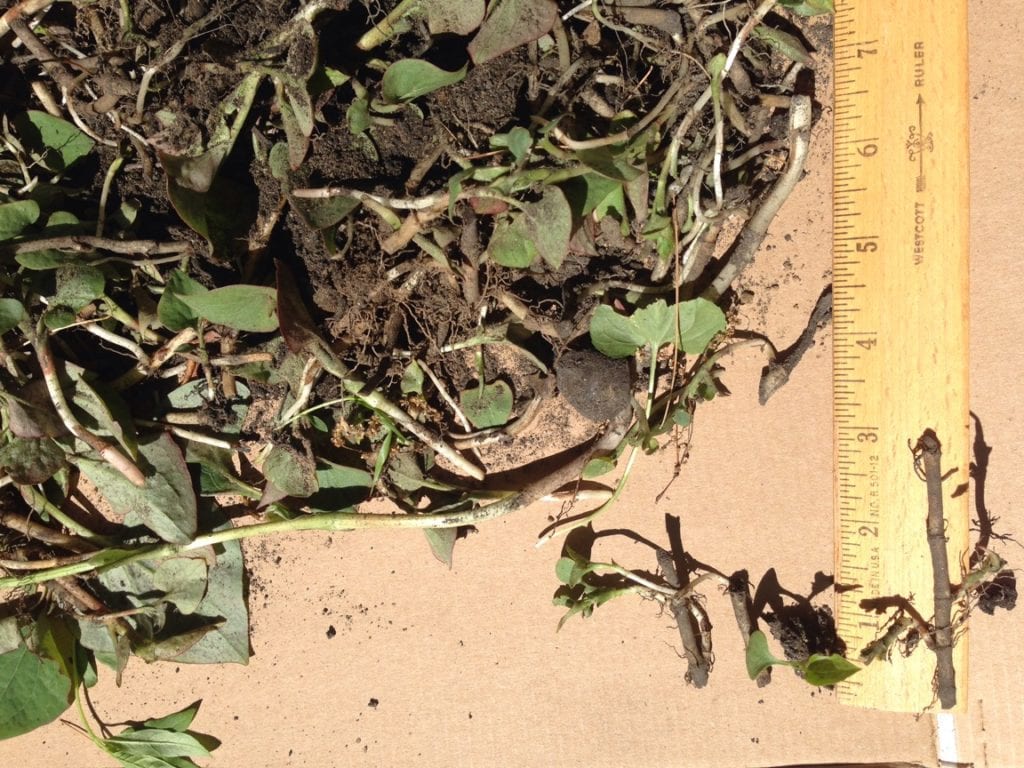 Even small fragments of root will re-sprout and all of the plant material should be incinerated or taken to a site equipped to handle invasive plant material.

According to the Invasive Species Specialist Group (ISSG), “Houttuynia cordata is a perennial plant that has been introduced as an ornamental for gardens. While the plant has apparently not escaped confinement, there is much fear that it will eventually present a huge risk to native habitats. It has a high reproductive and vegetative growth rate and quickly overtakes the gardens where it is planted. Control of this species is difficult as it will reproduce by both seeds and rhizome fragments…. All uprooted plant material should be disposed of by incineration or taken to an official transfer station or landfill site [equipped to handle invasive plant material].” 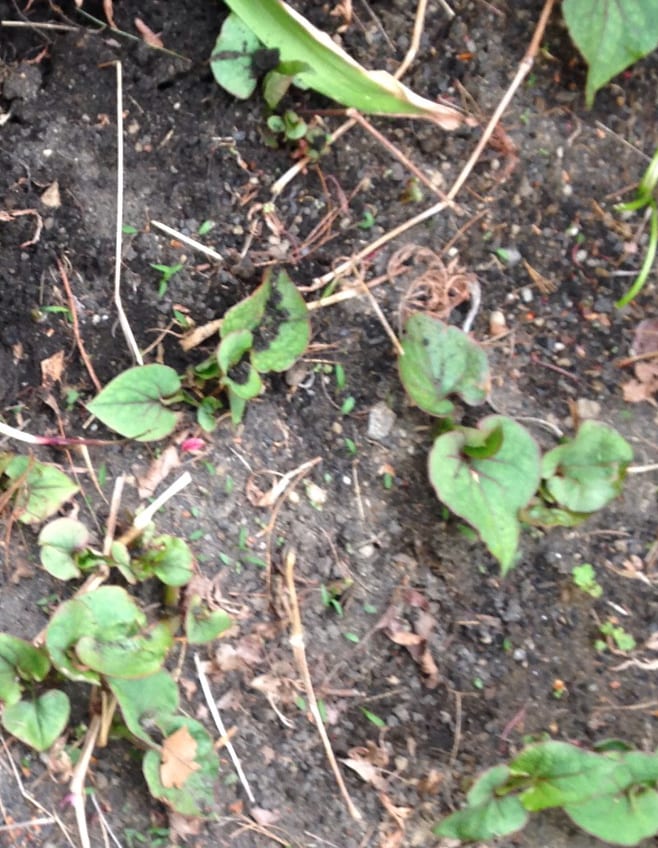 After a thorough bed cleaning in the fall, Houttuynia emerged the next spring.

Unfortunately, Houttuynia rhizomes are very brittle and easily break into segments as small as one half inch. All segments are viable and must be carefully screened out of the soil. In spite of my careful efforts in the fall, this spring, 2016, Houttuynia popped up throughout the bed, and I had to repeat the removal process.

All sources that I consulted indicate that it will take multiple years to completely eradicate the Houttuynia. One control method recommends repeated application of herbicides. Though an herbicide is a last resort for me, it will have to be the removal method under the Japanese maple tree. The maple’s roots are too close to the surface to allow the deep digging required to remove Houttuynia roots. An alternate control method that many have found successful is to cover the affected area with black plastic, carpet, or some other impenetrable barrier. This solarization method can take several years to complete and leaves much to be desired aesthetically. 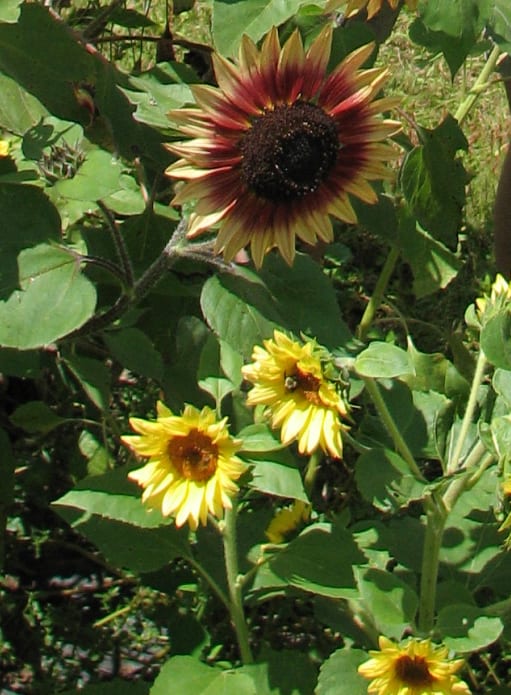 Before replanting perennials where Houttuyunia was removed, I’ll stick with annuals until I’m sure the invader is gone.

After carrying out root removal last fall and again this spring, I will wait a couple of seasons to be certain that the plant has been eliminated before replanting perennials. My short-term strategy is to plant annuals (sunflowers this year), which will be more attractive than black plastic and the birds will enjoy the bounty as well. At the end of the growing season, I will remove the annuals and repeat the digging process anywhere that Houttuynia foliage is spotted.

There are many voices on both sides of the native plant debate, but after witnessing the aggressive nature of this exotic introduction and now facing many years to control the invader, I’m more acutely aware of the benefits of limiting our plant purchases to those that are native to our garden locales. Houttuynia cordata has a wide native range throughout Asia where is it revered for its edible and medicinal uses. In the United States, where it continues to be sold in both seed and plant forms, it frequently becomes invasive. Unfortunately, I learned this lesson too late for my gardens.

Penny Lewis has been at the helm of ELA since 2006, first as the Executive Assistant and for the past five years as ELA’s Executive Director. She develops educational programs, oversees the ELA website, and manages the organization from her home in southern New Hampshire, where she keeps bees, raises ducks, and maintains perennial beds, vegetable gardens, and six wooded acres.

The Emerald Ash Borer: Information about the Ash Tree Killer and other “Boring” Beetles
Mechanical Control of Invasive Shrubs on Oyster River Forest in Durham, NH